I Always Cry at Weddings

A married woman is her husband’s property, and property is theft. There was no question about this 20 years ago, at least among the crowd I ran with. Years later, as property became identity, many of my friends, women and men, told me they had misgivings about their stand, doubts centered around their children-to-be. And one or two ad­mitted that they sought the “commitment” marriage signi­fied, although they still hated the inequitable institution itself. Need I say that most of these men and women have gotten married, some married and divorced?

Me, I supported any and all of this from the sidelines: I was gay then, am gay now, and a faggot (very p.c. term at the time) could afford to be ideologically pure. But on March 1, 1993, l have the option to go to City Hall… oh, I mean we have the option, my long-suffering honey and I, to go to City Hall and register as domestic partners. Will we take it? Shall we pretend to tie some kind of knot?

Anyone who’s read the papers knows that registered domestic partnership isn’t marriage and doesn’t confer the legal status, tax privileges, benefits, and general acclaim that marriage does. So is it ritual we want? John and I could have gotten “married” years ago, exchanging reli­gious or secular vows the way some lesbian and gay male couples have. In fact, I think my former dentist had a rabbi perform an ecumenical service in Central Park for his boyfriend and himself. That’s fine. If I had attended the ceremony, I would have cried: I always cry at weddings, any kind of wedding. But my partner and I mistrust the historical vestments of religion almost as much as we reject the deed-of-ownership certificate of marriage: this is one reason we get along.

Will good things happen when the unmarriable register at City Hall? If our partners die, we have a piece of paper to show we were family, so we won’t get thrown out of our rent-stabilized apartments. We’ll finally possess the inalien­able right to visit our loved ones in those cheerful city hospitals and prisons: gay city workers may also count on bereavement leave and unpaid family leave. Nevertheless, these workers are suing the city to have their domestic partners covered by municipal health plans, because the mayor doesn’t know how to keep a promise that has money attached. Of course, without health coverage that bereavement leave becomes increasingly pertinent.

Money. Rights. When I came out, more than two decades ago, I found I could develop a sense of myself that allowed me to ask startlingly obvious questions, such as, why should anyone be paid less for the same work? Why can’t anyone capable adopt children? Why can’t my boyfriend (I didn’t have a boyfriend, but you know what I mean) be treated like any other spouse? Later, when I began to work at the Voice, others asked these questions with me and we won, in a 1982 union contract, the nation’s first health coverage for — lacking sweeter language — “spousal equivalents.”

I have spent more than 10 years in this ghetto of fairness, and I honestly can’t imagine private or public life any other way. The Village Voice has become a strange place to work because, gaywise, it seems like a hoped-for everywhere some number of years from now. Not wishing to be alone, my colleagues and I try to spread the practical word about our spousal equivalent coverage, knowing this is one way to make a banal son of bigotry disappear.

Is it dangerous to feel normal? There’s pleasure to be had, the kind you associate with a good dinner and warm bed. It’s seductive not to fight the world, to think about growing older able to enjoy at least a few of the promises of youth, when utopia looked merely like where you couldn’t live and what you couldn’t have. I’d get married in that utopia. They would throw rice, we would drive away.

But this is not, definitely not, why I will be first on line on March 1. My partner and I are already committed to each other just fine, and I don’t feature monogamy as a universal recipe, anyway. Keep the rice. We are registering to cause trouble, and hope you do the same.

Our registration will goose the mayor in the right direc­tion; will provide private employers with the governmental imprimatur they seem to need to extend their benefits; and will take away the last excuse from insurers by showing that queer heads may too be counted as family. (It’s a good time to shake up insurers because, with the threat of government crackdown, they’ll do anything to survive.)

If executed with attitude and aplomb, our registration will be a ritual of equality at least and of power at best. When, in the misty future, things will have gone so far that photographers make livings from “registration albums” and bakeries offer ready stocks of “partner” cakes, then John and I will find our yellowed registration certificate, burn it like a draft card, and see what action fairness demands next. ■ 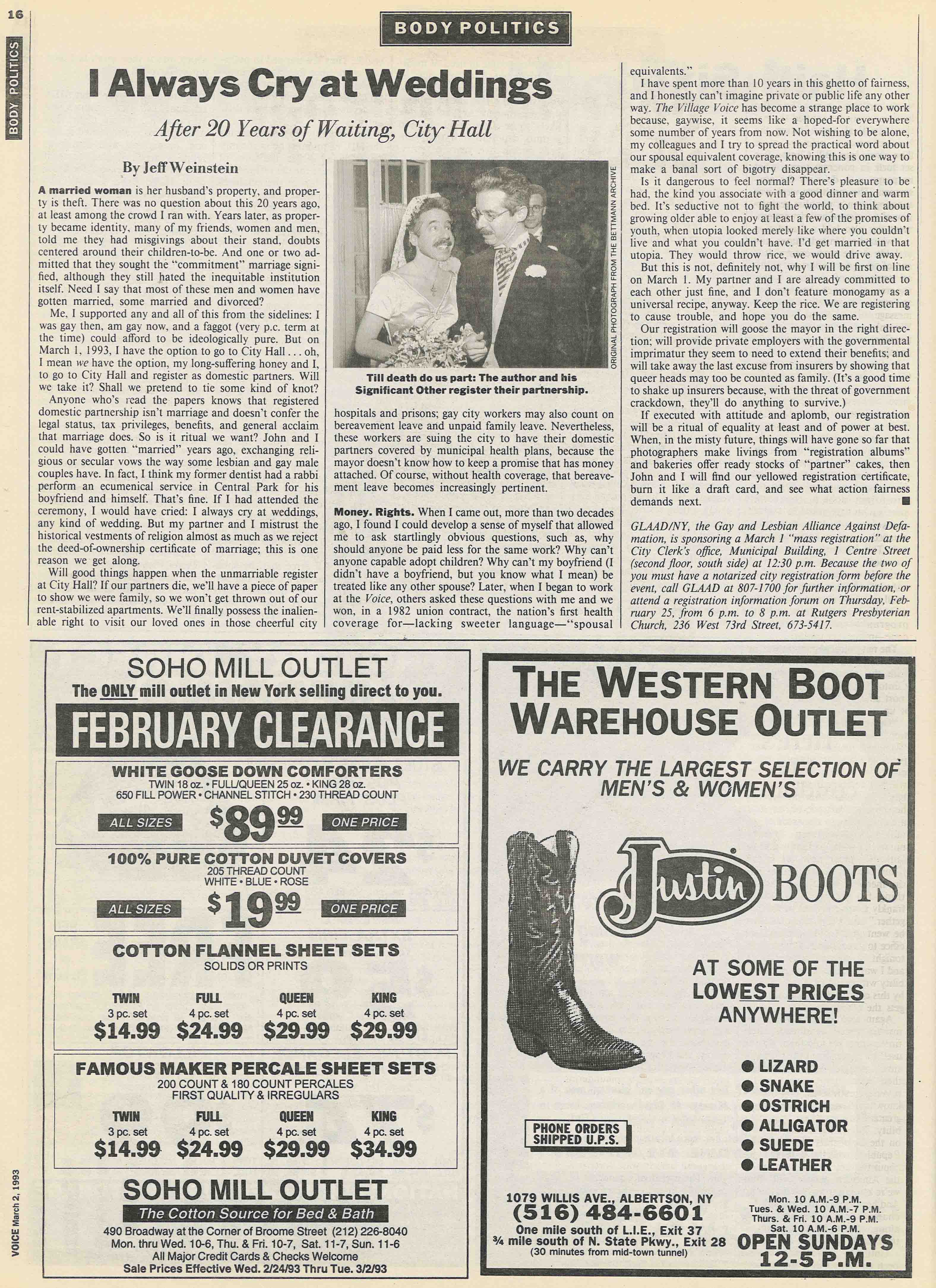