Stonewall 1979: The Drag of Politics

“Gay people aren’t fighting anymore,” drawled Marsha P. Johnson, 34. “They don’t care as long as they have a bar to go to. You know that, darling. But when I came down here 10 years ago, I caught the drift the minute I walked into Sher­idan Square. I said, ‘It’s about time, honey.’ ”

We were sitting in the Bagel And, originally the Stonewall bar, where re­sistance to police raids started gay liber­ation 10 years ago. This evening the space around us aspired to sleek wholesomeness instead of the warm sleaze of an un­marked, underlit gay bar — hanging plants instead of go-go boys. But despite the changes over 10 years, Marsha looks the same, still in his drag that is vibrantly out of tune with the times. When Marsha saunters up Christopher Street, a younger generation of ersatz cowboys and truckers looks at him as a plumed curiosity: why would anyone want to do that?

Marsha’s drag the night we talked was merely a “‘functional layering of coat over sweatsuit over a florid blouse; it had been a rainy day on the streets. But no weather could keep costume-jewelry earrings from Marsha’s hair, nor the red plastic high heels from coming out of his bag once we were away from the puddles. Marsha patted a dab of rouge on his brown cheeks, added a scent of faded cologne, focused on me, on the potato salad, on the air, and continued on in his lazily singsong voice. “I was in lots of raids before. All the street queens were. The paddy wagon was a regular routine. We used to sit in our little 42nd Street hotel rooms — ‘hot spring hotels,’ they used to call them — and party and get high and think about walking down the street someday and not worry about getting busted by the police. That was a dream we all had, sitting in those hotel rooms or in the queens’ tanks of the jails. So, honey, when it came that night, I was ready to tip a few cars for a dream. It was that year — 1969 — when I finally went out in the street in drag full-time. I just said, ‘I don’t give a shit,’ and I’ve been in drag most of the time since.”

As gay liberation changed from a resistance against police raids into a full-fledged movement, Marsha and fellow street transvestite Sylvia Rivera organized their people. Sylvia and Marsha knew each other from days of waiting tables at Child’s Restaurant. They were a tough duo. The street transvestites became the vanguard of the movement: S.T.A.R. (Street Transvestite Action Revolutionaries). By 1971, they had their own communal house on 15th Street. It had only four rooms, and the landlord had turned the electricity off, but it became a home for a floating population of 20 street queens, living by candlelight, sleeping everywhere, including the bathtub. Marsha became the mother of the S.T.A.R. house, and for a year and a half those four rooms were a warm respite from the streets.

It didn’t last long. Nothing could stave off the problem of rent. By July 1971, the house had closed and the street transvestites lost favor in gay liberation. S.T.A.R. dispersed. Some overdosed, some were stabbed by johns. Sylvia Rivera retired to a domestic life upstate as a food preparer. Looking back, Marsha merely says, “You know how people are. They’re very close at one time and after a while they just go away.” Marsha is one the few who remained — a walking relic of a half-dead movement.

Marsha’s position on Christopher Street is double-edged. A martyr of gay liberation, he is denied entrance to many bars. Andy Warhol silkscreens of Marsha sell for $1400 in a Christopher Street gallery while Marsha walks the sidewalk outside, broke.

Marsha recently appeared in a Hot Peaches show celebrating the Pope’s death. In honor of the occasion, Marsha was a nun for a night in a white habit and green-glittered eyes. He pulled out a crumpled paper and sang from it: “Climb Every Mountain,” every verse, his voice wandering a capella up and down the scale. The audience, stoned and silent, hardly breathed, and then rose at once in honor. Marsha’s power with his followers is hard to describe, but it is undeniable. When friends describe him, they invariably use words like “saint,” “charismatic queen,” and “myth.” In fact, Marsha was formally canonized years ago in a ceremony conducted by the Angels of Light and the Hot Peaches.

Some of Marsha’s charisma is simply due to his survival power. His past life would have destroyed many: several attempts on his life by johns, eight nervous breakdowns (by Marsha’s count); more than 100 arrests (Marsha doesn’t count anymore). A revolving door life, from the streets to Riker’s Island to Bellevue to Central Islip Hospital to the Tombs.

But to his admirers Marsha represents more than streetwise survival. He can turn conventional values on their head, publicly affirming his differentness, making beauty from the most unlikely materials. Marsha’s camp-garbage aesthetic is shared by many street transvestites — affordable, democratic taste — but Marsha is an acknowledged leader. “Marsha caught on like wildfire,” Bob (formerly Flash) Storm remembers, “and set all these new trends in dressing. She was the abundance and beauty of the street trash. And flowers, always flowers. Going after this sky-high energy with extreme makeup and colored wigs and pins and jewelry. She looked like an ornament when she was done.” Marsha’s transformation defies masculinity, but he is still a far cry from feminine — his out-sized features protruding beneath the makeup, flamboyant clothes set on a six-foot body, muscled arms and legs. Marsha eludes gender and ends up a countercultural saint of transformation.

His plumed saintliness is volatile, how­ever; two weeks after his night as a nun, Marsha was in Riker’s Island again after striking a Ty’s bartender who had refused his patronage. It was not an isolated incident. One Christopher Street shop manager called Marsha a “bully under­neath that soft sweet manner.” Others have cited Marsha’s toughness, and Sylvia Rivera recalls he first met Marsha in a drag-out fight with a street queen who had pulled Marsha’s Halloween wig from his head. Aggression has been a necessary part of Marsha’s life. It doesn’t make friends on Christopher Street.

“This last breakdown, I was fighting with everyone. I don’t like getting in those fights, but when they say you can’t stay and you don’t know why… When I’m having a breakdown it seems like I meet all these weird people, all these strangers who don’t understand gay people coming around. I know something is coming on and I light my candles and incense and pray to my saints. Sometimes I have visions. In one of them, there were 10 suns shining in the sky, gorgeous and freaked out, like the end of the world. I love my saints, darling, but sometimes the visions can be scary.”

Marsha wasn’t always a mythic figure, of course. He was once Malcolm Michaels, a church boy from Elizabeth, New Jersey. “I went every Sunday, honey, because I wanted to learn about Jesus. I always thought gayness was some sort of dream, something people talked about but never did. So I remained asexual for 17 years, until I left New Jersey and came to New York. It didn’t look too gay, until I saw all these nellie things hustling near the Howard Johnson’s at 6th Avenue and 8th Street.” Malcolm Michaels soon put on a blond wig and became Marsha P. (for “Pay it no mind”) Johnson.

“For the last 17 years,” Marsha said, “my life has been built around sex and gay liberation, being a drag queen and dating all the time. It can get very boring you know, darling, all these men. Some­times they hassle me if they thought I was a woman when they picked me up. I just say: ‘Honey, this is like Macy’s Depart­ment Store. If you like the merchandise, you take it. If you don’t, I got to go.’ I’d like to stop hustling and have a regular husband. It’s easy to get a husband, but it’s not easy to get them to, support me, or pay the bills, or give up sex. Because, honey, gay men don’t give up sex for anything. My best husband — I met him dating — was a junkie and he got shot in a robbery. He wasn’t a very good man, but he used to give me everything. I’ve had eight husbands and eight separations and none of them have given me a white house and picket fence.”

Marsha’s residence is spread out. “I’ve been 86ed from a lot of places — Ty’s, Boots and Saddles, the Ramrod, the Silver Dollar, G.G. Knickerbockers, Keller’s, the Limelight — so I spend most of my time on Christopher Street or under the West Side Highway.” Marsha sleeps at the Beacon Baths ($7 a night), keeps his wardrobe in a Port Authority locker, makes up at department store sample counters (this morning it was Lord and Taylor, but the regular rotation includes Bloomingdale’s, Macy’s, Saks Fifth Avenue, B. Altman). “It’s hard work, being beautiful, when you don’t have a place. I do my best though,” Marsha drawled, putting another earring in his hair and spearing another piece of potato salad. “I’m trying to get my own place so I can have my wardrobe and I can set up my candles to the saints, my own altar. I haven’t had my own alter in a long time. Maybe by the time of the gay pride parade I will have an apartment so I can invite my friends up for cocktails.” Later, talking with Marsha’s friends, I find that Marsha is always looking for apartments; he rarely gets one.

Marsha will carry a GAY LOVE banner in this year’s parade, his ninth. “When I started I carried the S.T.A.R. banner, and then it became the GAY POOR PEOPLE banner and it’s been GAY LOVE for the last couple years. I think that says everything. All the gay love party will do is give gay birthday parties. I’d like to give birthday parties for Charles Ludlam, Jackie Curtis, Harry Koutoukas, Bob Kohler, Sylvia Rivera, Bambi L’Amour, Bob Storm, Holly Woodlawn, John John, and the Hot Peaches. I think that’s the “best organization for now.”

Marsha finished his bowl of potato salad, knocked back the last drop of a soda, shook the earrings in his hair, and walked into Sheridan Square. “It’s changed, honey, this street is a different place. But when it gets down to it, it’s money that rules the world, and Lucifer is coming. Yes he is. In the meantime, spare change for a dying queen, darling?”

Steve Watson is the author of Minette: Recollections of a Part-Time Lady. 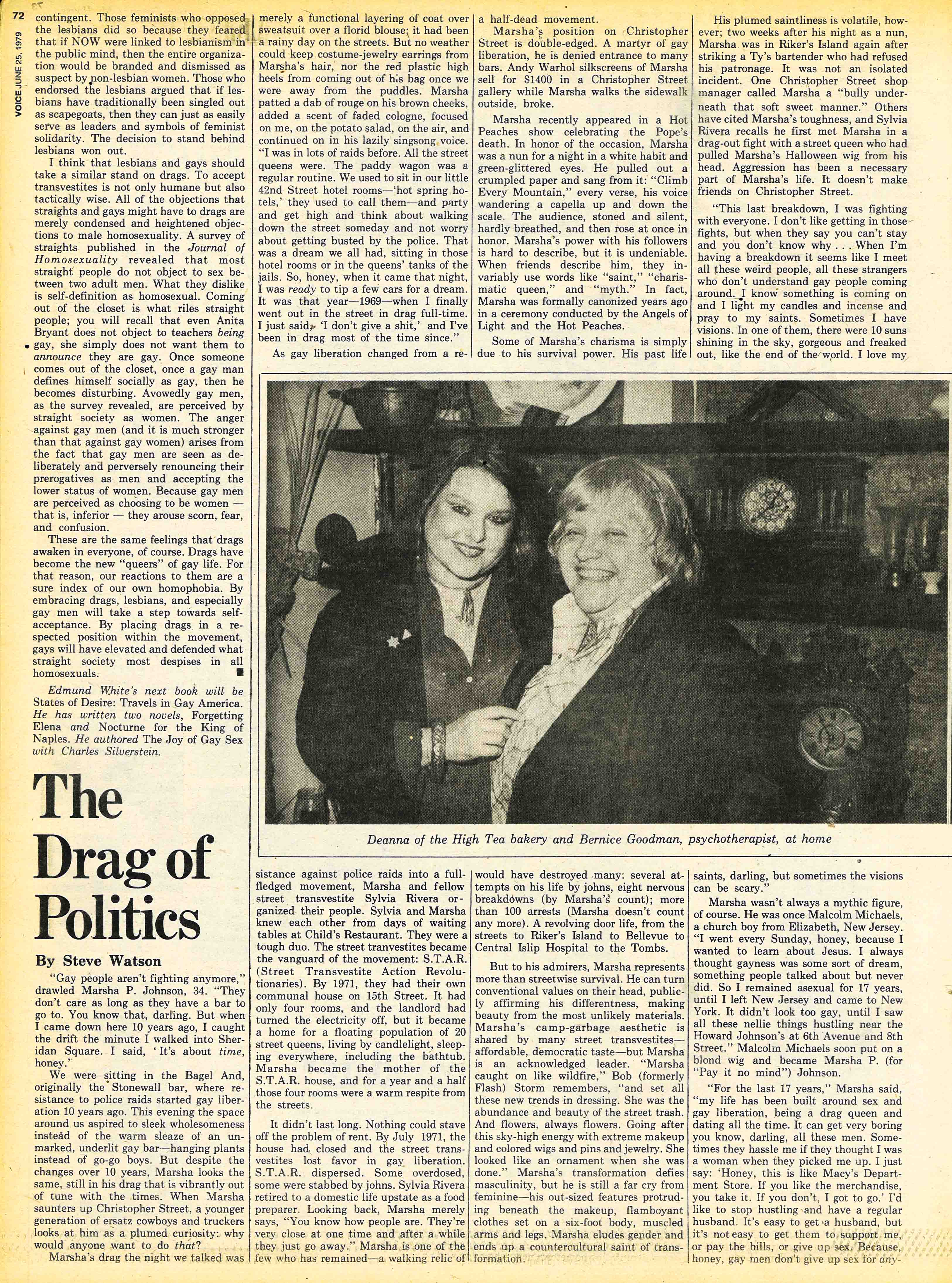 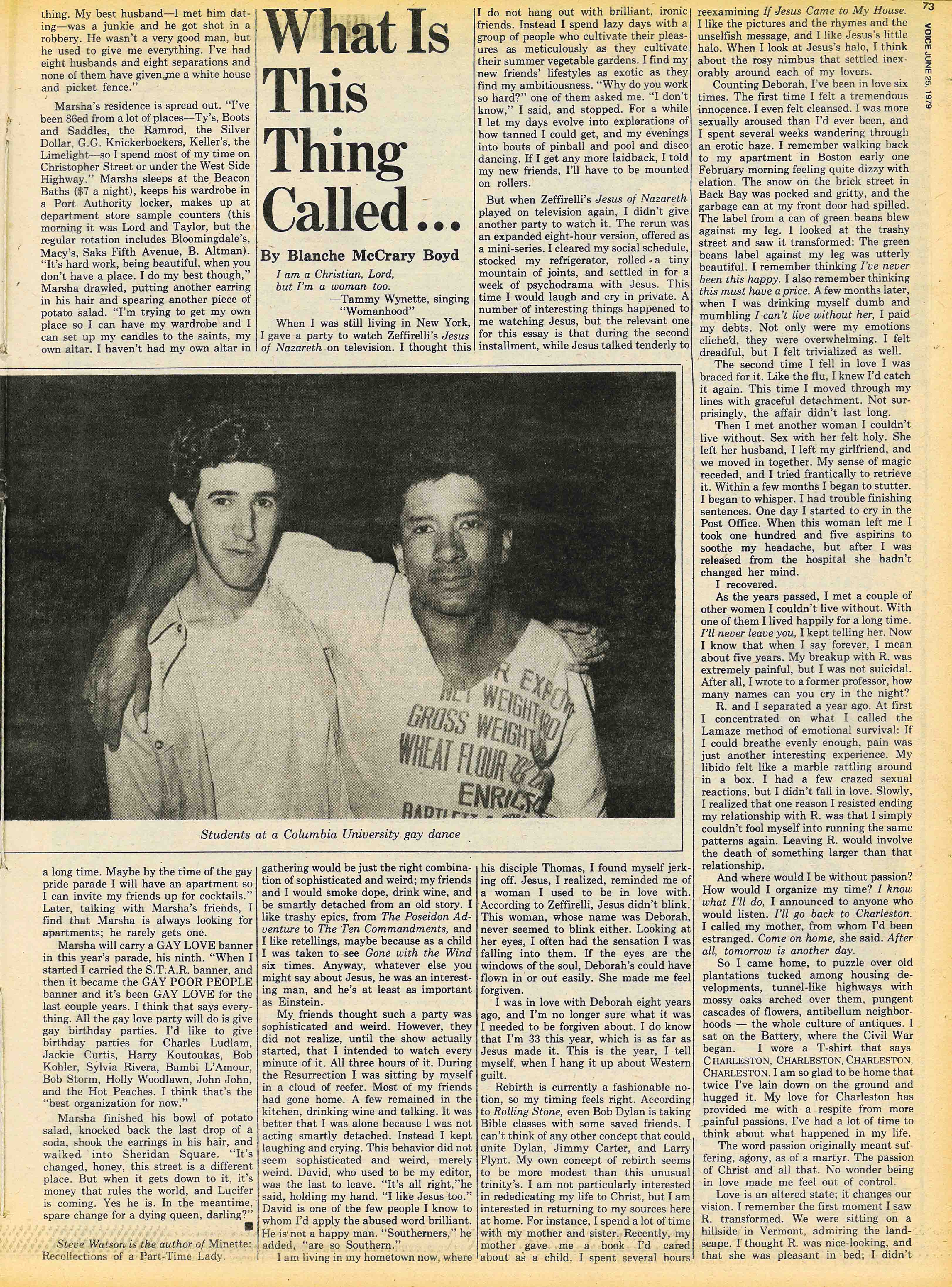