Of course the truly cool and satori-graced visitors who conven­tion-cavort in New York will stay in their hotel rooms and watch Joe Franklin — Franklin being the show-biz equivalent to a Zen master: his questions could make Robert Pirsig crash his cycle into a tree — rather than have their eyes, ears, and nostrils (particularly the nostrils) assaulted by the mongrel heat of the dog days. Yet, some demented souls will insist upon exploring the city in search of underground pleasures, pleasures which have been conjured up in their fevered imaginations by Grove Press novels they road in college. Some will even venture into the Anvil, a boys’ club for budding De Sades, with their Instamatics.…

Being a timorous, gentle soul (I don’t kill cockroaches, I lecture them), I don’t take Travis Bickle Culture Club tours through the intestinal tracts of the rotting metropolis, through the neon worminess of Times Square (where porn star Terri Hall is the patron saint) or the Ganges of garbage that is the Lower East Side or the leather-Nazi bulging crotch homo-Superman haven of Christopher Street… my own neighborhood looks like Wino Gulch… no, I’d rather stay home and make sculpture out of watermelon rinds. However, I can provide a dilettan­tish guide to underground theatrics and atmospherics for those who want to wade ankle-deep into the nocturnal currents.

For underground rock music, there’s Max’s (17th Street and Park Avenue South, 777-7880), Club 82 (82 East 4th Street, 477-1046 or 477-0820), Zeppz (267 West 23rd Street), and CBGB (315 Bowery at Bleecker, 982-4052); they all present T-shirted musical prodigies who write songs like “l’d Rather Slash My Wrists and Cut My Throat Than Spend the Night With You,” “Tricks Are for Kids,” and “We Need a Better Navy,” and perform with an evangelical zeal which could make rockers out of the editors of Commonweal. In winter, dress at these places is rococo casual — Wayne County, a drag-queen performer who writes a funny column for Rock Scene, has said that to truly achieve the CBGB look, you let a blind man go berserk in a thrift shop. But during the summer, it’s functional casual that prevails. Cheap clothes, but chic, and not too chic… under­stated, that is. It isn’t inverse snobbery, or slumming: Most of the people here buy their clothes at army-navy stores or Canal Street shops because they can’t afford to buy clothes at Barney’s. Most of the band members are in debt and many (most?) of the customers are unemployed. So if you — and I mean you, nervous thrill-seeking Udall delegate — go strolling into these places in your clean Levis and rolled up copy of Cue in your back pocket, you won’t get a hostile glare (nobody cares that much) but you might feel a certain vague peripheral annoyance. To prevent this carry a copy of Punk as a Disdain Repellent.

As far as atmosphere is concerned, Zeppz and Max’s are rather vacant, or, more precisely, the atmosphere is made by the band that is playing there. A good band, good vibes; a lousy band, Yawnsville. Club 82 has atmosphere but it’s the result of interior decoration which could best be described as Glitzy Baroque: leafy ornamentations on the pillars, wall-sized mirrors, strobe lights, hanging mirrored balls which give off swirling atoms of light — a bespangled-funhouse. But nobody’s laughing. It’s actually more comfortable for the musicians, because they have a performing space which allows a lot of room for lurching and mike-twirling.

The performing area at CBGB is about as wide as a tatami mat but the walls reverberate with History. If Hart Crane were alive today, he would still live at the Chelsea Hotel but he would spend his evenings at CBGB, he and his sailor friends swaying to the music of Television, Talking Heads, Ramones, Mink de Ville, and the Harry Von Well Blues Band. Be sure to visit the bathrooms because someday the panels will be removed and donated to the Louvre.

Sex, soft-core style, can be found by the rock-loathing thrill-seeker at a place called the Project, (127 Grand Street; 580-9119) where for $5 sexual fantasies are dramatized (the money goes for a good cause: to find a Korean fami­ly who will adopt WOR’s Barry Farber). The fantasies are really tacky, they’ll make oatmeal out of your hormones. They’re on this level: A man walks into his kitch­en, finds a woman in his freezer; he tries to thaw her out with popsicle licks and she melts into the linoleum. Lights out. Did that turn you on? (Boy, are you sick.) Afterward, people stick around and actually discuss the perform­ances and the pyschodynamics of the fantasies and it’s like a pseudocourse at the New School. Titillation and mastication all in one package. Still, as jive entertainment it beats “California Suite” (Walter Kerr really lost his mind over that one) and some of  the fantasies do have a Venus in Furs seediness which might send an erotic tingle into your neocortex. Those who are truly Apollinairely decadent will then head down to Night Court and watch irritable whores arraigned before a bleary-eyed judge… it’s the nadir of the underground nadir. It’s a page that Travis Bickle left out of his diary, it’s a.…

This Baedeker is making tapioca out of my mind; maybe I’ll just make an igloo out of those melon rinds and hide out until this whole thing blows over. And reflect upon true decadent protozoa, like Sarah Miles… John Davidson.… 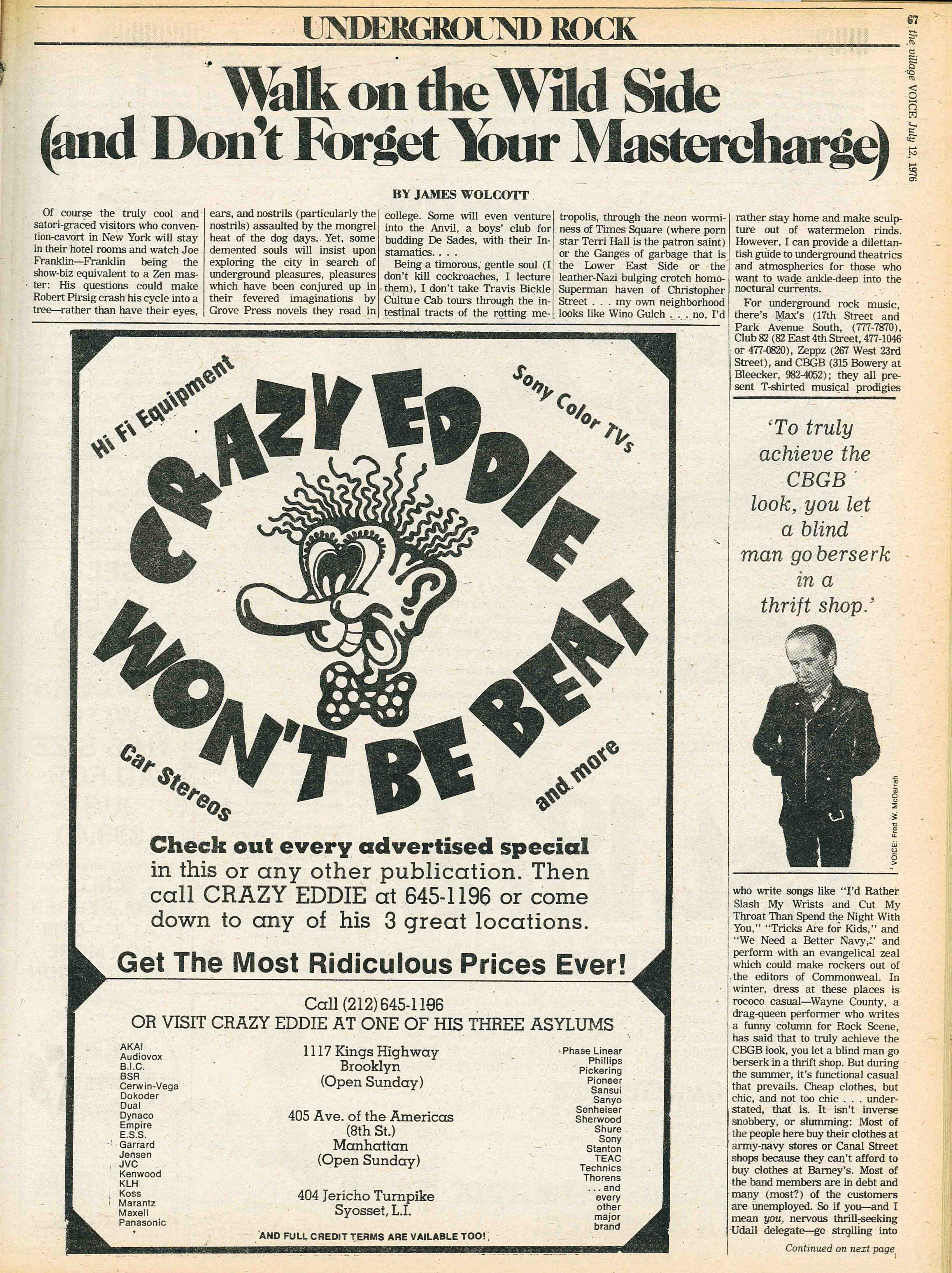 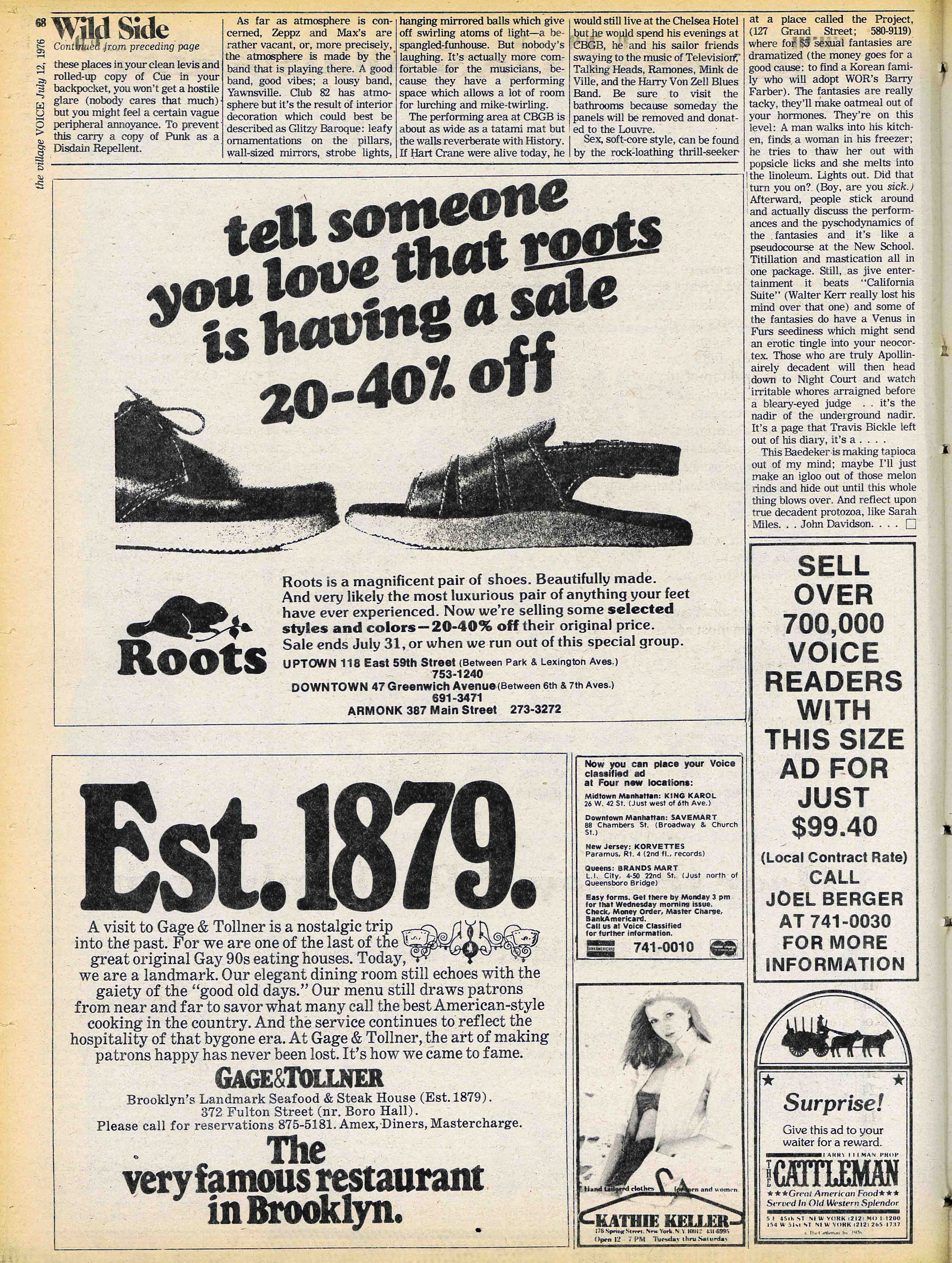