The first question about Horses, Patti Smith’s debut album, might be called the Janis question — it comes up whenever a particularly exciting performer has fashioned a distinctive style, attracted a fierce public following, and then steps into a studio for the first time. Either the style informs the record, or the process of making a record causes the performer to alter the style, the result being, more often than not, a garish parody that is forced, hysterical, or both. In that case, the record can be counted on to provide a spurious, instant satisfaction; about a month later, it drops dead. Cheap thrills.

What has happened in Patti Smith’s case is something else again. She had made an authentic record that is in no way merely a transcript once-removed of her live show. The record not only captures Smith whole, it offers shadows, perspectives, and shadings that few of her fans could have caught before. The band has improved enormously (especially Lenny Kaye, who as a rhythm guitarist carries the group); the sound Smith has been working out over the past few months is no different than it has been, simply much stronger and more pointed. John Cale’s production is evident only when you think about how easily someone else could have botched this job. Cale is anonymous, the creator of the album only in the sense that he presumably created the psychological space in which it was possible perhaps, obvious, for Smith and her band to get their music out of their heads onto tape. The music is thin, clean, and brittle: good 1964 rock and roll (see the “Nuggets” collection Kaye produced for Elektra) with a ’70s gloss. It’s what they wanted, one assumes, but not necessarily what anyone but Cale would have known how to get them. One thing that does not come cheap these days is convincing primitivism.

But if the disc captures Smith, it also exposes her. Those new shadows and perspectives that come off the record add power to her music, but they also, after a few listenings, begin to undermine its incantatory momentum. The concepts that lie behind Smith’s performance — her version of rock and roll raves, the New York avant-garde, surrealist imagery and aesthetic strategy, the beatnik hipster pose, the dark night of the street punk soul, and so on — emerge more clearly with each playing, until they turn into shtick.

Which is to say that after a time one hears points of reference more clearly than a point of view. The brutal, physical details of the self-mutilation in Smith’s most ambitious number, “Horses,” take one right back to the terminal violence best represented by Buñuel and Dali’s “Un Chien Andalou” — you might even think that on some level the horses of the title are the same horses that were stuffed into Dali’s piano. But the sheer surrealistic classicism of Smith’s violence song — after a bit of it seems like a matter of artistic formality — finally makes one doubt that Smith has really thought about why Buñuel centered his film around a shot of himself holding a razor over a women’s eye and an immediately following shot of the eye sliced open; if that was a tradition Smith is trying to understand or a posture she wants to imitate.

For Smith’s posture ultimately seems an end in itself. The success of the album in putting Smith across isolates what she is putting across — raising, and begging, questions of depth, substance, and the like. If the concepts, sources, and references in her lyrics and in her singing overwhelm the music, and the singing as singing, then, if her record shrinks over the next month or so, it will not be because the music has diminished in power, as one keeps playing the record, as happens when a style is forced; it will be because her concepts wore out. If you’re going to mess around with the kind of stuff Buñuel, Dali, and Rimbaud were putting out, you have to come up with a lot more than an homage.

That said, there is much on Horses that gets home free. “Gloria” takes the listener past its hopelessly tough-chick spoken intro into a realm that shows Patti Smith at her best, all fury and desire. The double-tracked chants and vocals on “Horses,” where Smith sounds with no self-con­sciousness like two very different people telling very different stories, are hypnotic. The stron­gest piece on Horses, though, is “Free Money,” a nice, straightfor­ward rock and roll song about someone with nothing who wants everything. Here, it all comes to­gether: Smith as a writer, singer, poetry reader; and the musicians playing for their lives. The cut opens with Kaye chording lightly, all understated menace, remind­ing one perhaps of the way Crosby, Stills, Nash & Young opened “Southern Man.” Then Smith drives the band forward, the pace picks up, and the music takes shape somewhere between the sound of the early Stones and the one-time-only Hackamore Brick. Smith soars, as she does nowhere else on the album, till the momentum is unbreakable, and then pulls out like a pilot buzzing the house of her ex-lover.

I love “Free Money,” and I have no doubt I always will. The rest of the album is attractive, but it breaks too easily into its parts under the attention it demands. It seems, in the end, an “art statement,” which is to say, more a comment on an aesthetic than an aesthetic in action. That, of course, may come. 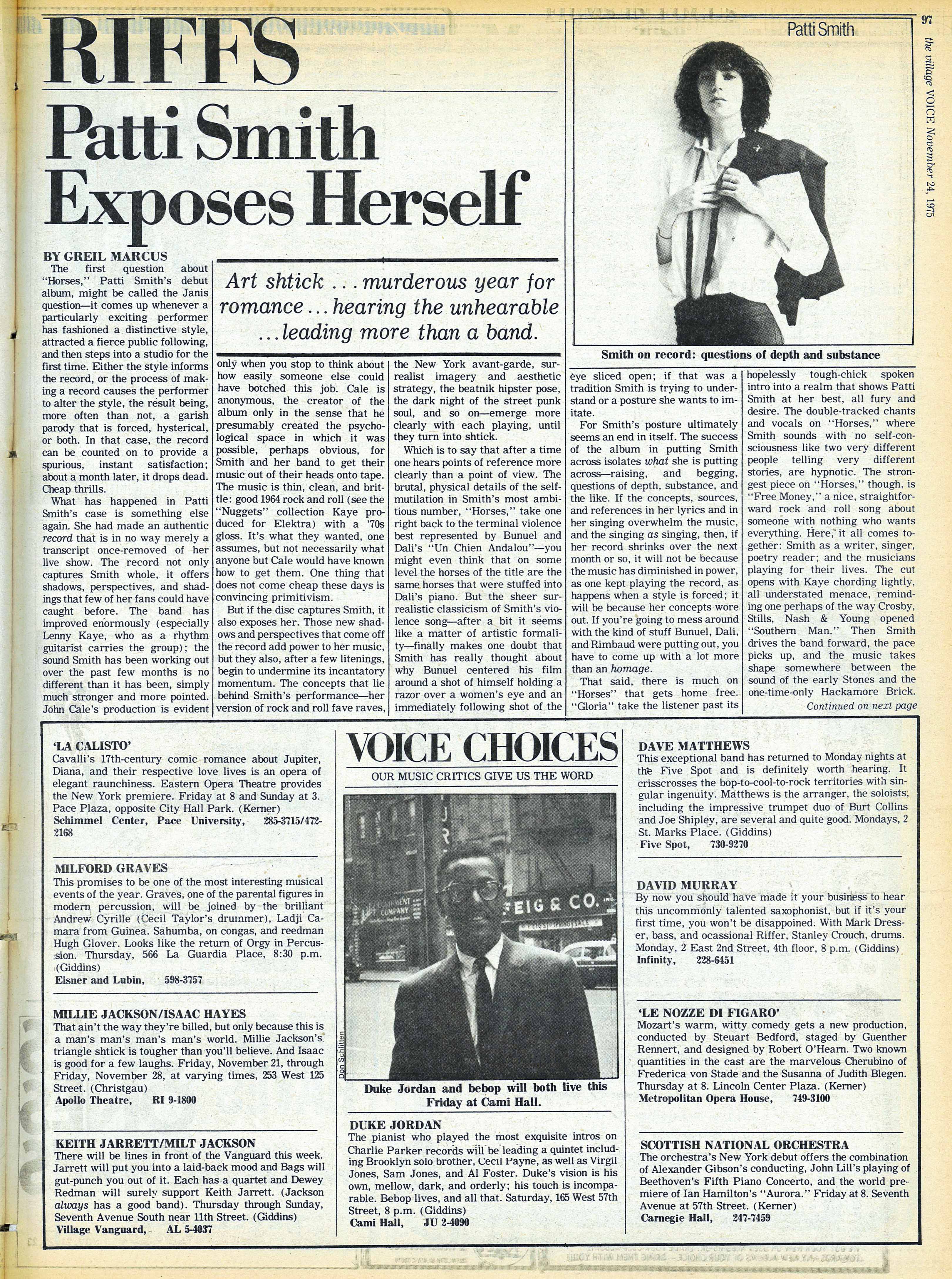 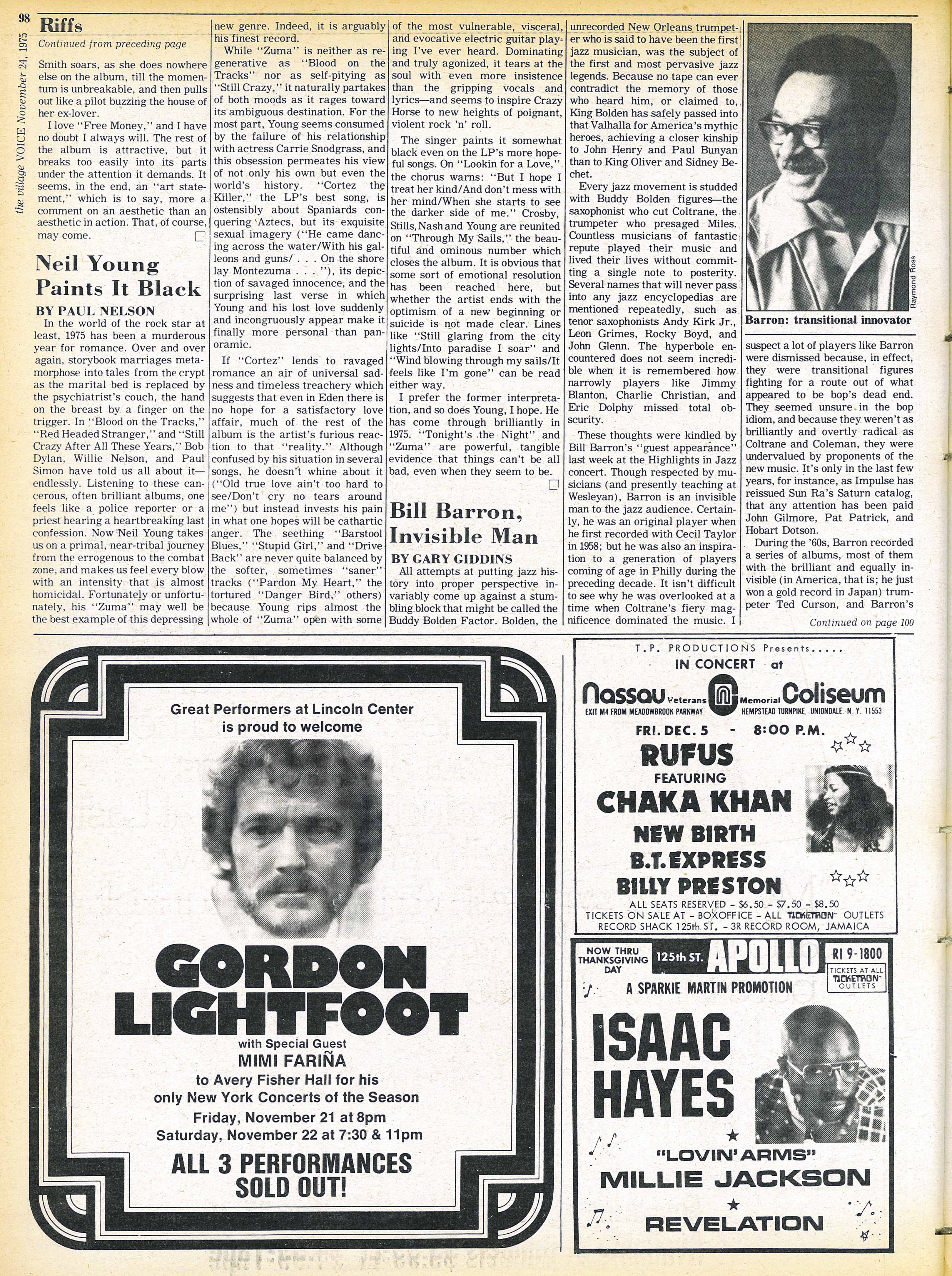