A copy of “Witt” was slid across the table to Patti Smith. “Would you sign this for me, please?” “Sure,” said Patti, “what’s your first name?” He told her. “Like in New Jersey?” Patti asked, and he said no: with a z. “Well, I’ll draw you a map of Jersey,” and so on the inside page Patti scratched its intestinal boundaries, in the middle labeled it Neo Jersey, signed her name, and passed the copy of “Witt” back to Jerzy Kosinski.

The night before, after the second set at the Other End, the greenroom door opened and the remark hanging in the air was Bob Dylan asking a member of Patti’s band, “You’ve never been to New Jersey?” So, all hail Jersey. And in honor of Dylan’s own flair for geographical salutation (“So long New York, hello East Orange”), all hail the Rock and Roll Republic of New York. With the Rolling Stones holding out at Madison Square Garden, Patti Smith and her band at the Other End, and Bob Dylan making visitations to both events, New York was once again the world’s Rock and Roll Republic.

Patti Smith had a special Rimbaud-emblematized statement printed up in honor of Stones week, and when her band went into its version of “Time Is on My Side” (yes it is), she unbuttoned her blouse to reveal a Keith Richard T-shirt beneath. On the opening night she was tearing into each song and even those somewhat used to her galloping id were puzzled by lines like “You gotta a lotta nerve sayin’ you won’t be my parking meter.” Unknown to many in the audience, parked in the back of the room, his meter running a little quick, was the legendary Bobby D. himself. Dylan, despite his wary, quintessential cool, was giving the already highly charged room an extra layer of electricity and Patti, intoxicated by the atmosphere, rocked with stallion abandon. She was positively playing to Dylan, like Keith Carradine played to Lily Tomlin in the club scene from Nashville. But Dylan is an expert in gamesman­ship, and he sat there, crossing and uncrossing his legs, playing back.

Afterwards, Dylan went backstage to introduce himself to Patti. He looked healthy, modestly relaxed (though his eyes never stopped burning with cool-blue fire), of un­imposing physicality, yet the corporeal Dylan can never be separated from the mythic Dylan, and it’s that other Dylan — the brooding, volatile, poet-star of “Don’t Look Back” — who heightens or destroys the mood of a room with the tiniest of gestures. So despite Dylan’s casual gracious­ness, everyone was excitedly unsettled.

And there was a sexual excitation in the room as well. Bob Dylan, the verdict was unanimous, is an intensely sexu­ally provocateur — “he really got me below the belt,” one of the women in the room said later. Understand, Dylan wasn’t egregiously coming on — he didn’t have to. For the sharp-pencil, slightly petulant vocals on “Blood on the Tracks” hardly prepared one for the warm, soft-bed tone of his speaking voice: the message driven home with that Dylan offhand is still Dylan compelling. So with just small talk he had us all subdued, even Patti, though when the photographers’ popping flashbulbs began, she laughing­ly pushed him aside, saying, “Fuck you, then take my picture, boys.” Dylan smiled and swayed away.

The party soon broke up — Dylan had given his encouragement to Patti, the rest of us had a glimpse from some future version of “Don’t Look Back” (but with a different star) — and the speculation about Dylan’s visit commenced. What did his casual benediction signify?

Probably nothing, was the reasonable answer. But such sensible explanations are unsatisfying, not only because it’s a waste of Dylan’s mystique to interpret his movies on the most prosaic level, but because the four-day engagement at the Other End convincingly demonstrated that Patti and the band are no small-time cult phenomenon. Not only was Patti in good voice, but the band is extending itself confidently. Jay Doherty, the newly acquired drummer (he played with Lance Loud’s group and lived to tell the tale), provides rhythmic heat, and Lenny Kaye has improved markedly on guitar — his solo on “Time Is on My Side” for example moves Keith Richard riffing to Verlaine slashing. The band’s technical improvement has helped revivify the repertoire: “Break It Up” is now more sharply focused, “Piss Factory” is dramatically jazzy, and their anthem, “Gloria,” ends the evening crashingly. Missing were “Free Money,” and “Land” — the Peckinpahesque cinematic ver­sion of “Land of 1000 Dances” — which is being saved for the forthcoming album.

Something is definitely going on here and I think I know what it is. During one of her sets Patti made the seemingly disconnected remark, “Don’t give up on Arnie Palmer.” But when the laughter subsided, she added, “The greats are still the greatest.” Yes, of course! All her life Patti Smith has had rock and roll in her blood — she has been, like the rest of us, a fan; this is part of her connection with her audience — and now she’s returning what rock has given her with the full force of her love. Perhaps Dylan perceives that this passion is a planet wave of no small sweep. Yet what I cherished most about Patti’s engagement was not the pounding rock-and-roll intensity but a throwaway gesture of camaraderie. When Lenny Kaye was having difficulty setting up his guitar between numbers, Patti paced around, joked around, scratched her stomach, scratched her hair­ — still Kaye was not quite ready. “I don’t really mind,” she told the audience. “I mean, Mick would wait all night for Keith.” 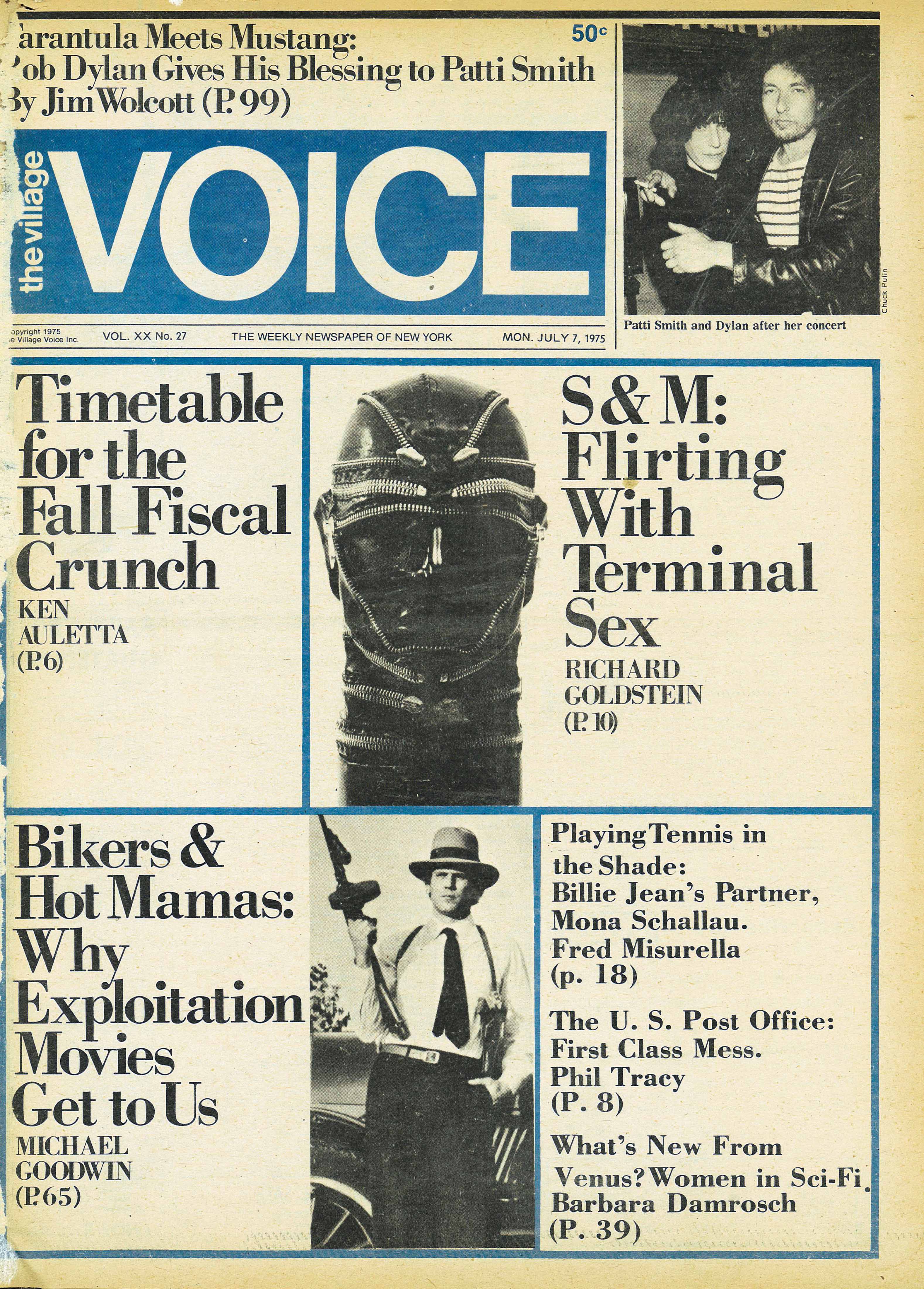 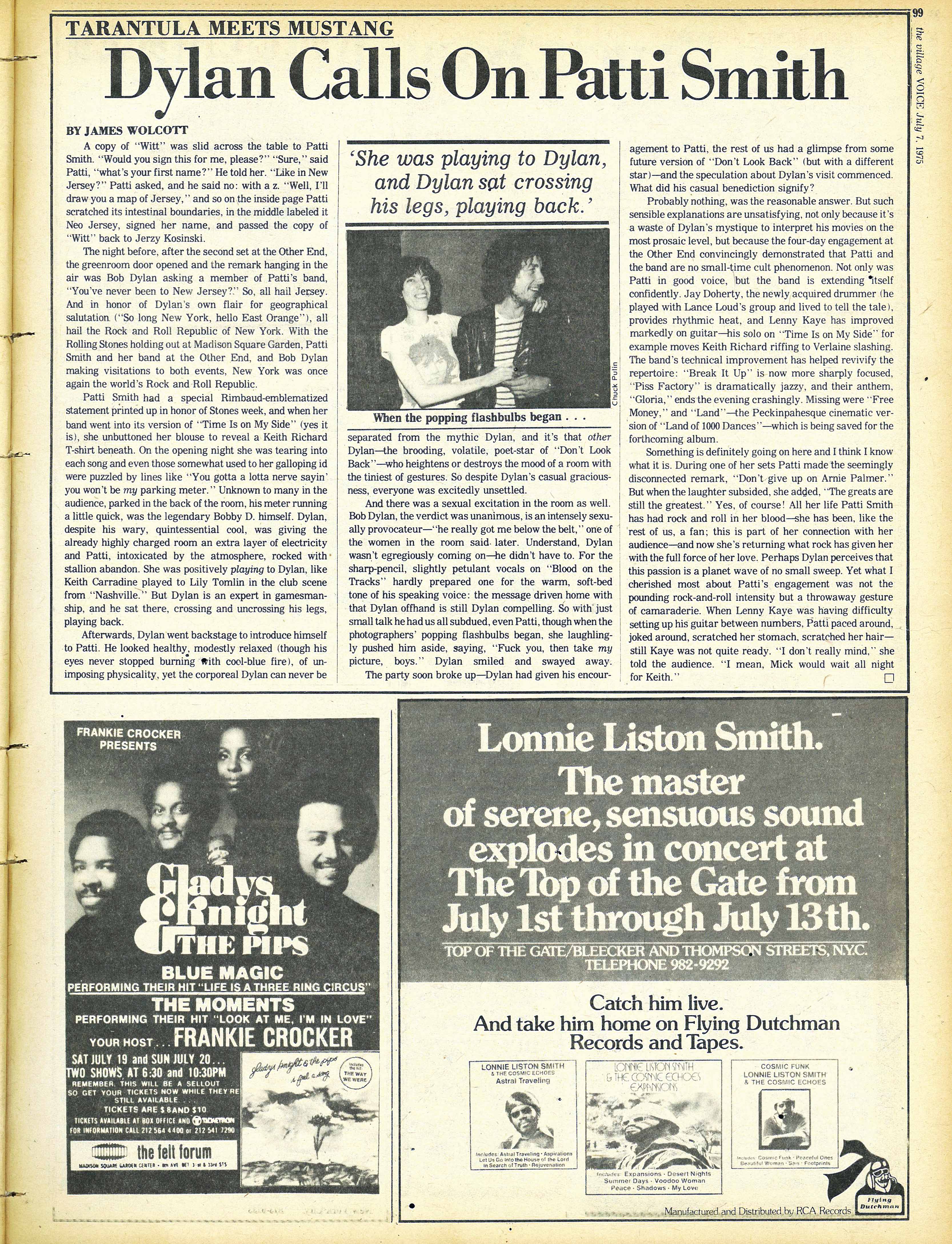