“This is not a ‘woman’s mov­ie,’ ” cautions John Singleton, 25, of his second feature. “Don’t say that or you’ll have every feminist in town coming out for attack. It’s a film with a black woman as the central character, directed by a black man.” The director of Boyz N the Hood, a film that launched a thousand teen gangsta flicks, sits in his hotel suite the morning of Poetic Justice‘s New York pre­miere ready to take the heat.

With Justice, Singleton moves his street kids out into the pasto­ral dreaminess of the highway from Compton to Oak town. It’s a road movie in the grand tradi­tion — nothing much happens, just one couple in the back of a mail van with the strangers Justice (Ja­net Jackson) and Lucky (Tupac Shakur) thrust together in the cab. The buzz on Justice, written and produced by the director, is that it lacks the drive, coherence, and general shoot-’em-up juice of Boyz. But Singleton makes no bones about shucking off the self-­described American Graffiti of the Compton crew for a twentysome­thing drama: “Everybody — all these little-dick motherfuckers — ­are trying to remake Boyz N the Hood while I’m on to the next story.

“Risky films like Poetic Justice test the limits of what is a com­mercial film. I didn’t set out to make a message movie. I set out to make films. When I make a film, I’m having a conversation with folks — just a very expensive conversation,” Singleton says, not particularly worried about losing his audience’s attention. “Justice is going to make a lot of money. Janet Jackson, Tupac. Everybody in the country would love to screw Janet Jackson.”

It is pointed out that despite Ms. Jackson’s video bodacious­ness, Singleton does not put the leads in bed together, the cheaper, easier way to a blockbuster. “No, but there is a love scene. It’s smooth,” he smiles, just a little. Singleton likes toying with expec­tations. Now that he’s got our at­tention with his hard-boy movie, he makes a sharp right into a com­ic love story — just because he can. “I want to make films with emo­tional impact. African Americans usually don’t get to have that on screen.”

But, what’s love got to do with it? When posed with the question, Is Justice a healing parable for an ailing community?, Singleton sighs, “I wanted to do something different. It’s a love story because that’s part of our experience too.… Now you’re going to ask me what Heywood’s phone call means.” Heywood, one of the beauticians in the shop where Jus­tice does hair, receives a phone call that reduces him to speech­lessness and his friends to tears. In the scene, everything very dan­gerous about swinging in the ’90s is implied, but nothing stated. “I want to give the audience mo­ments of guessing, stretching them, not giving every answer.” Which means, in this movie about girls and boys, Singleton leaves the lady’s clothes on and gives her words. Lots of poetry for Justice.

Justice’s inner life finds its way to sound through Maya Angelou’s resilient poetry, but such a dis­tinct voice threatens at times to overpower Jackson’s demure Jus­tice. “I know what you’re going to say,” counters Singleton. He ex­plains that the poetry serves not as filler for a female character be­yond his reach, but as an integral part of his vision of her. “I could write all the other parts for the character, but not the poetry. I should have used Sonia Sanchez, Toni Cade, some other woman poet, but Dr. Angelou is my favor­ite poet.” Does it seem at all ironic to the director that Maya Ange­lou is also the president’s favorite poet? “No, it just shows that Clin­ton’s smart.” Some messages poke through despite the creator’s pro­test; Justice suggests a literary ar­senal for expanded life expectan­cy, cloaking its didacticism in the cool manner of one sad girl’s musings.

Singleton did his research with a few close female friends as script-realness consultants to come up with Justice. “There are some lines I got directly from women’s mouths,” he says. “But when Jessie [Justice’s boss] says, ‘A man ain’t nothing but a tool,’ the women in the audience cheered — that’s pure Singleton. I was in the heads of these sisters, which is a triumph as a writer.” He pauses to point out a key turn on the new road of black represen­tation. “People are laughing at the words. A lot of black comedy is based on the physical, here people laugh at the words — that makes me feel good.”

It was Jackson, though, who came up with another pointedly female line for the film, “I think I’m going to go on a diet.” After warming to the handsome lad who might heal that lonely heart, Jus­tice gives a disparaging look down her healthy female form. “We were hanging out and eating Ros­coe’s chicken and waffles and soul food and all that fat food,” relates Singleton, whose movie uses “feminist” as an imprecation but is nonetheless keen on the authen­tic homegirl experience, “and she kind of got upset and said, ‘I’m gonna lose this weight.’ I said, ‘Keep it.’ It’s something I wanted in the role.

“I know that Justice is not a perfect movie,” Singleton begins. “Neither was Boyz. There are many stories to be told and this is just one of them. The gender dy­namic with our people is unique because of our history. Black women are doing better today than black men. I don’t really go into all that in Justice, like she probably makes more than him, and what about these women who are taking care of the men, or the reverse? This is more a love story, a summer dating movie.

“What I’d like to do is make movies that make lots of money, then put $1 million together for a movie that’s just about people and not give a fuck about what people think about it. Don’t you think I’d be upset if some people liked my movies?” ■ 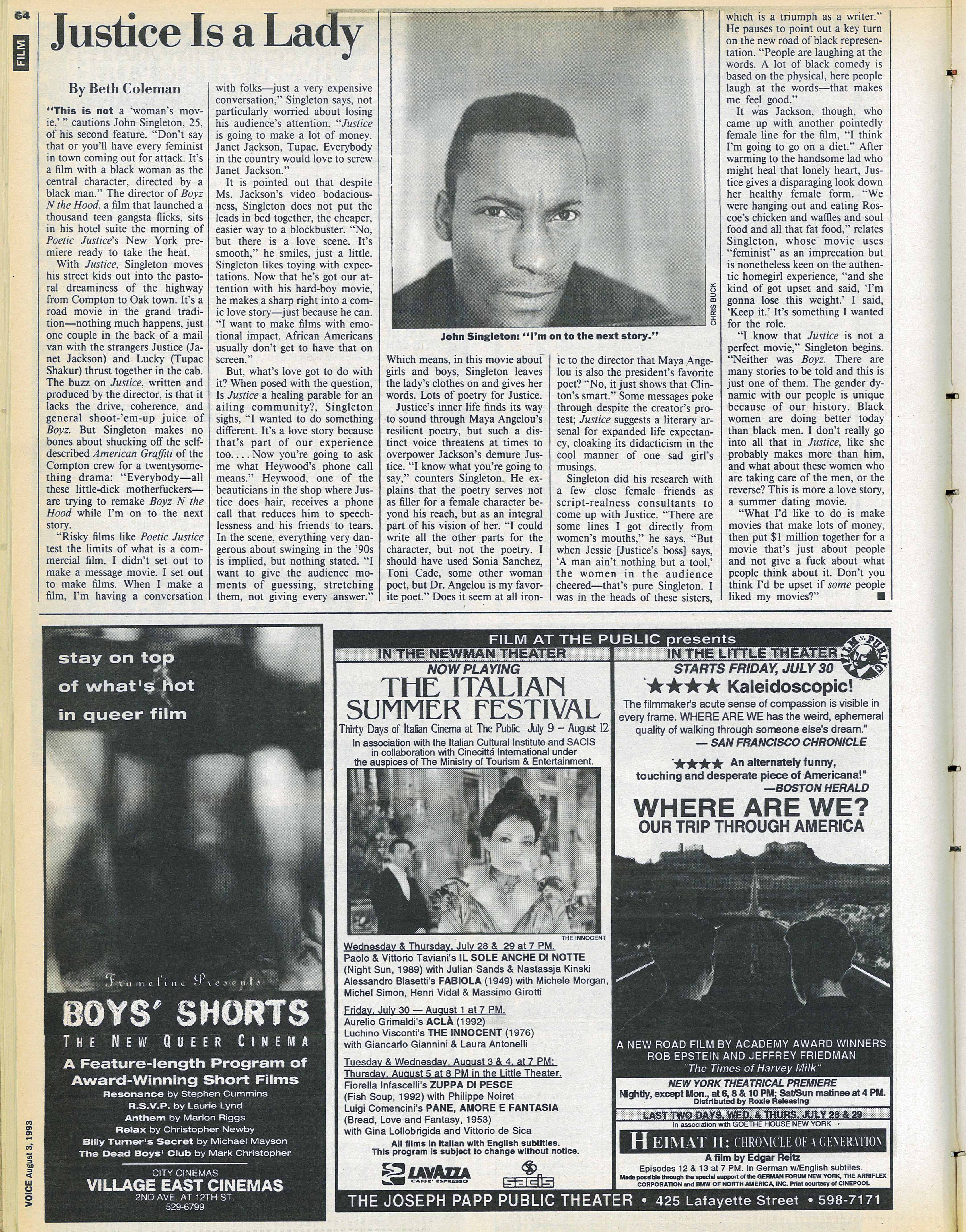