Heat-Seeking Bomb April 23, 1991 Every civilization gets the theater it deserves, and we get Miss Sai­gon, which means we can now say definitively that our civilization is over. After this, I see no way out but an aggressive clearance pro­gram: All the Broadway theaters must be demolished, without re­gard for their size, history, or landmark status; all the members of the League of New York Theatres must be lined up against a wall and shot; the New York Times must be firebombed into nothingness and its entire editori­al staff (most of whom are com­posed wholly of gravel and pitch anyway) fed into a stonecrusher and used to repave the West Side Highway; while anyone found to have voluntarily purchased a $100 ticket to Miss Saigon must be sentenced to a lifetime of hard ­labor and have his or her children cooked and distributed as food supplies to famine areas in the Third World. The authors, one hopes, will have the grace to com­mit ritual suicide — the atrium of the Marriott Marquis Hotel might be a suitable spot — while Camer­on Mackintosh and his produc­tion staff should be slowly beaten to death with blunt instruments; this year’s Pulitzer Prize judges in drama could be used for the job.

In answer to your next ques­tion, no, I didn’t like Miss Saigon. I don’t even like Puccini’s Ma­dama Butterfly all that much, real­ly, but at least Puccini (a) knew how to compose music; (b) was a master at conveying emotion and theatrical effect through music; (c) exhorted his librettists to strive for maximum credibility as a way of giving his theatrical creations a hold on life. Every moment of Miss Saigon is as implausible as it is trite and savorless, from the dancing to a ’40s blues sax in the Saigon bar of the opening, to the suicide by service revolver (no one even says “Get a doctor!”) in the back room of a Bangkok whorehouse at the end. As this suggests, Miss Saigon is drab and sordid in its triteness. Puccini’s Japan — borrowed from David Be­lasco — was a remote and fascinat­ing place to his audience; it was also not a country where, within recent memory, thousands of Ital­ians had died and others had com­mitted unspeakable brutalities, in a futile and disgusting war that had torn Italy’s social fabric apart.

To impose the kitsch tragedy of the betrayed geisha and her feckless American lover on the very real tragedy of the betrayed Asian country is a trick of exploitation that someone involved with Miss Saigon must have thought very clever. It would not have occurred to Puccini, who had the sense to keep a melodramatist’s honorable distance from reality. Helicopter or no helicopter (and the celebrat­ed chopper effect is hardly more than a techno-update of the midg­et clown car in a circus), using the fall of Saigon as an accessory to tear-jerking over the plight of an imaginary bar girl and her Amer­asian baby, and passing the result off as some kind of social com­ment, is a degradation of the spir­it too depressing to contemplate. The difference between Puccini and this show, in essence, is the difference between buying a trin­ket from a street peddler and get­ting rolled by a whore; the whore doesn’t make the latter act less degrading by coming away with $100 instead of $2.

At the top of Act II, Miss Saigon trespasses on reality in a way that’s far more revolting than any of its fictive steps over the bound­ary line: To cue us into the woes of its Cio-Cio-San and her child, what looks like real documentary footage of half-American Viet­namese children in an orphanage is shown. I write this with my mental fingers crossed, hoping against hope that the press rep will phone tomorrow to tell me these children are in fact highly paid members of SAG or AFTRA, that the whole thing is a replica, that the producers are donating a 10th of their proceeds to the relief of Vietnamese war orphans. But I’m not taking any bets on the arrival of that phone call. You can assume provisionally that the cre­ators of Miss Saigon see absolute­ly nothing wrong in using the real anguish of genuine abandoned children to jerk a few extra tears on their way to parlaying them­selves a multimillion-dollar profit. If you want to plunk down your money at their box office knowing that, OK, but please stop reading me. For good. You’ll never under­stand anything I write.

Miss Saigon‘s perpetrators may respond that their work has a seri­ous intent: to indict the world, and America in particular, for its unfeeling materialistic greed. Ser­monizing in this vein has always paid off for melodramatists, at popular prices, but it gets a tad shady when they demand a C-note for the privilege of hearing their sermon, especially when its theme, on which they have noth­ing new or imaginative to say, is so old and familiar — almost as fa­miliar as the old tunes from which their score is so liberally bor­rowed. (Linda Winer’s Newsday review offered the most thorough list of these, though she left out my favorite, Rodgers and Hart’s “There’s a Small Hotel,” on the tune of which the American sol­dier’s song to his sleeping Viet­namese love is built.) Like thieves with no real understanding of the goods they’ve filched, the authors dump both ideas and tunes on­stage cheaply and repetitively, taking no pains with them; the only desire evident is to unload the illicit haul as profitably as pos­sible. Not content with Butterfly alone, they snatch a bit of Tosca by making the heroine’s North Vietnamese fiancé, who’s already doing double duty as a blend of Puccini’s Bonze and Yamadori, an officer in the Viet Cong’s se­cret police, so he can be Baron Scarpia as well; all they left out was having her shout, “Questa è il bacio di Kim!” as she shoots him.

If the price scale weren’t enough proof that these crooks believe not one word of the pious indictment they spout, they provide a handy piece of additional evidence by putting their sermon in the mouth of Jonathan Pryce as the Engi­neer, a Saigon pimp whose role is analogous to that of Goro, the matchmaker in Puccini’s opera, but built up here into a lead, with reckless disregard for the charac­ter’s irrelevance to the drama. The results are just as interesting as you’d expect Butterfly to be with Goro as the central figure: After every limp episode of action, he comes on to hector the audience for interminable minutes about the innate greed of humanity and the joys of the free-enterprise sys­tem. Then some event happens, limply, and then there’s another interminable lecture. The bore­dom might be mitigated if Pryce were a brilliant bravura actor, but, despite the shrewdly exploited up­roar over his casting, he turns out — as usual in these overheated situations — to be utterly uninter­esting, performing the role in a raspy, energetic monotone, varied not once in the evening by a change of facial expression or vocal color. 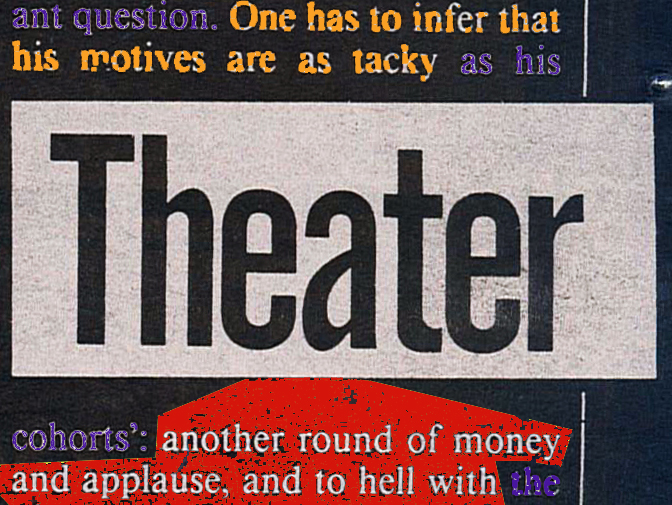 In addition — and I hate having to say this, because on principle I support the right of a gifted actor to play any part — his appearance as a Eurasian is ludicrous (espe­cially since, because of the uproar, he seems to be trying at the same time to act as un-Asian as possi­ble). Equity was perfectly right to object, on grounds of common sense: the worst Asian-American actor imaginable would be better in the role, because his ethnicity would make the audience see, if nothing else, the distance between the character and his dream of America. Pryce (who’s taller than most of the white Americans in the cast) comes off as exactly what he is — a scrawny, balding, mid­dle-aged Welsh ham selling the same tired showbiz routine he’s sold a thousand times before. He looks exactly as silly as Carol Channing would playing the life of Lena Home.

The only mileage the show gets out of him comes from his reputa­tion as a serious artist — another piece of peddled prestige: That’s a classical actor you’re watching hump the hood of that Cadillac, jocko. Why Pryce, with every ma­jor role in the repertoire available to him, would want to be seen in New York for only the third time repeating this one is not a pleas­ant question. One has to infer that his motives are as tacky as his cohorts’: another round of money and applause, and to hell with the dignity of art. He will go down in theater history as the acclaimed actor who sold out not just his gifts, but his professional stand­ing, for garbage — making him a sleazier whore than any bar girl in the history of Saigon.

As for his colleagues onstage, to whom fewer choices are available, they moved me to pity for their own plight, if not for their charac­ters’. Lea Salonga was worth bringing over: She has a sweet and very distinct stage personality, plus a beautiful voice with a strong, even-toned chest range, though like most people who sing this kind of amplified pop swill, she produces her upper register erratically and insecurely. (All the women in the cast do: When the whores sing the hero and heroine a wedding chorus, it’s a vocal coach’s nightmare.) Willy Falk, Hinton Battle, and Liz Callaway, as the evening’s Pinkerton, Sharp­less, and Kate respectively, have nothing of interest to say, sing, or do, since the perpetrators, ever ea­ger to play both sides against the middle, have made them non-ugly Americans to balance the ugly version of America offered by the Engineer. They look and sound just like the nice people in TV commercials, but what other choice have they in a show so exclusively preoccupied with its own marketing?

David Hersey’s lighting is less murky than usual, so the audience can see for once, behind Nicholas Hytner’s perfunctorily efficient staging, just how shabby and dull John Napier’s visual sense is. In general, you will be doing your friends a service if you can embar­rass them out of wasting their money on Miss Saigon, but you probably won’t have to trouble for long, since the alleged $34 million advance sale is presumably as big a fiction as every other claim that’s been made about this taw­dry monolith by the Ozymandiac frauds who built it. ■