It’s appropriate that the first, the only, place I heard the Audio Two’s last record, “I Like Cher­ries,” was on The D.N.A.-Hank Love Ra­dio Show (WNWK, 105.9, Sunday, 2 to 4 a.m.). As the self-proclaimed “Under­ground of Hip-Hop,” D.N.A.-Love is in­deed a minority in a minority, playing many cuts, artists, and labels that the Magics and Red Alerts won’t even unbox. So, while Magic pompously fronts him­self as “the Donald Trump of hip-hop,” and J. R. Vance wastes talk-time engag­ing Red Alert in the corniest chitchat this side of Diff’rent Strokes, I even tape the commercials read by DJ Hank Love. (The Billy Jean’s Hair Salon ad is an existentialist must-hear.)

Sure, D.N.A. plays a lot of wack rec­ords, but that’s a hazard of democracy. (Mitch-Ski and Shan ain’t exactly the Kings of Rock, by the way.) D.N.A.-Love listeners hear their own music — the “Star for a Night” feature, 4-X, allows them to visit the Manhattan studio and hear their tapes as part of their own verbal environ. The audience knows by fact, not by de­fault, that they’re definitely down with the program. “The people who listen to our show, they want to be recognized as listeners,” D.N.A. says. “We talk with our listeners; we don’t talk to them. It’s like a family operation. ‘Yo, what up, D.N.A. I’d like to give a shot-out to my homeboy Bob-Ski up in…’ ” Thusly, this is the only N.Y. radio show where B-boys take over the station in a substantive sense, and in which the act of first playing an Audio Two, Ultra Magnetic M.C.’s, Ma­jestic Productions, Ultimate Choice, or Super Lover Cee, becomes a vital com­munity service.

Although the exact size of the audience is not clear (the 27-year-old entrepreneur boasts “two million listeners in four states”), its brief history is more so. D.N.A. took over the WNWK (formerly WHBI) slot in 1985 right after Mr. Magic was called back by PT-109’d WBLS, which had stopped playing hip-hop for personal reasons.

D.N.A., a former Jackson 5 fan turned music student turned Rush Productions promo man, had long realized that the best way to get inside the biz was from backstage. His backstage pass was getting a sponsor to pay for two-hour time blocks and reselling minute-sized slices to adver­tisers. It worked, and his continued suc­cess with the show has allowed him to develop related projects, such as estab­lishing something wrongly too rare in the music business: a Black-owned company (D.N.A. International, Inc.) producing, packaging, and promoting hip-hop.

Now inside, he hasn’t exactly been wel­comed with open arms. D.N.A. is gay, and some of the difficulty he meets on a professional level, just trying to get his crews airplay at various spots on the dial, for example, comes from prejudice. While not denying this, he sees other reasons for the chilly reception as well.

No delusions of grandeur here; just someone who’s nonsense-tired. Hardly a proselyte, but not one to hold back. “I wish we could get together and organize and take control of this music, because now, it’s like we’re just a bunch o’ Black folks running around, with no organiza­tion, no goals, you know what I’m sayin’? There’s nothing organized.”

“I’m not on an ego trip. Believe me, I am more than honored that people listen to me. They are the stars. They are the Donald Trumps, they are the Godfathers, they are the Official Voice, not me. They put us there, they keep us there, without their support we wouldn’t be there. That’s why I always say on the radio they are the world’s greatest listeners: they stay up ’til two o’clock in the morning. They’ve been with us for almost three years, supporting us. I don’t need no title like ‘Godfather,’ or… uh… uh… ‘Pre­mier,’ or ‘Emperor.’ It’s not all about me. Without them, we ain’t jack-doo-doo. And that’s a quote.”

But then, perhaps thinking he had spo­ken just a little too soon, D.N.A. turned to his coproducer. “Well, how do you feel, Hank? Should we call you, ‘Prime Minis­ter Hank Love’?”

Oh, Yeah, Those ‘Other’ Hip-Hop Shows

Yeah, it’s a ghetto, boo-yee. But we call it home (or at least we do until after the revolv-olution).

MR. MAGIC’S RAP ATTACK (WBLS, 107.5, Friday & Saturday, 9 p.m. to 12.)
Pluses: Marley Marl, the man most likely to exceed, and to eventually write a jazz opera for turntables. Marley Marl’s well-earned status as a disc driver is assured, and we’ve known his mixes were edgy for years. Other pluses: the show’s nice, half-hour bites (just right for tap­ing), clear signal, Magic’s knowledge of the music and his attitude.
Negatives: Magic‘s attitude (his on-air dissing of Hurby et alli makes him sound like a jealous wish-I-wuz), regular “World Premieres” that aren’t, and, though “Fly” Tyrone Williams is no longer in the booth, Magic still pushes up, up, and away too much Pop Art-Prism-Cold Chillin’ product. (That year-end top 20 was a joke, ha-ha.)

THE AWESOME 2 (WNWK, Sunday, 4 to 5 a.m.)
America’s chillest air personalities, with the best opening music of any of these shows, comes on right after D.N.A., and they’re close in the Raw Feeling De­partment, but, being chill, they’re some­times a little cold on-air. Pluses: Toddy­Tod (subtly dope), frank, on-air shout-outs and interviews, the lack of gee-whiz. (They’re chill, remember?)
Negatives: Four in the a.m.!

THE POST-PUNK PROGRESSIVE POP PARTY (WRHU, 88.5, Sunday, 12 to 2 a.m.)
Only a white man could come up with a title like that, namely one Jeff Foss, who realized the strength of hip-hop’s position as New Music, even while nearby, more-powerful WLIR was still pushing A Flock of Bird-Dookey as the sound for the lunar colonies.
Pluses: No commercials (just Foss’s drolly read UPI wire copy on the hour), plays old stuff, tells name of artist, cut and record company (unlike Magic), and doesn’t talk over records. Foss also has obviously tak­en the “Float Like a Butterfly, Sting Like a Gordon Sumner” approach, surround­ing himself with the necessary Negroes to give his show real flat-tire-on-a-tar-roof­ rainy-night credibility. His on-air DJ, “Machete Master” Johnny Juice (of Kings of Pressure, hip-hop’s most physi­cally rhythmic DJ), and Juice’s “Love Mixes” (Force M.D.’s “Love Is a House” over the Super Lover Cee beat, 4-X) hype like a pipe.
Negative: Foss’s voice hurts — it’s hip­-hop meets Don Pardo meets the Ginsu Knife. Same thing for P-Fine’s vocals (WNYU, 89.1, ‘Tuesday, 9 to 10:30 p.m.). I honestly didn’t listen to Dré too much in his last days, and I still don’t listen to P or Vandy C (WNYE, 91.5, Saturday, 6 to 7 p.m.) too much, either. Sorry, folks. Sorry, sorry, sorry, sorry, sorry. Daytime radio on KISS and ’BLS, that is. ■

Run-D.M.C., L.L. Cool J, and Doug E. Fresh were all initially dismissed by most of the much record labels to which they sent tapes. This was because the people who make the money from this music’s success, for the most part, can’t dance, and don’t know the music, stretching over race, class, and age lines to grab a buck. Knowhumsayin’?

Serious-Lee-Fine is a crew from Chill City, Long Island, a/k/a Uniondale. Rush Productions manages them and Jam Master Jay is working with them in the studio even though they don’t have a record deal. I’ve been listening to their demo tape for the past seven months and, at this rate, I should tire of it sometime around the spring of 1994. The six-armed, six-legged, three-penised monster consists of vo­calists Serious C (lead rapper, architect, and bass drum), Choice Rapper Lee-Ski (mid­dleman, transmission, and planar saw), and K-Fine (afterburner, fragments, and Klaxon), with DJ Choice Master Chip C pumpin’ up the volume over his subliminal slicing. De­spite the cutesy name, the crew’s style is strictly seek-and-de­stroy; hyperassault on cuts with such titles as “Sweat,” “Bass Goes Bang,” and “The Mon­ster Shit.” Their sce­narios usually go sum’n like this: lead rapper Serious C starts the set with punchy assonances and alliterations, blowing subject matter all out of proportion. Then Lee-Ski’s convinced vocal grinds it right back down to size with a rap as exact as the jaws in a trap. Finally, Lee tosses it off to K-Fine, he takes it out of here, and the fun really begins: syntax gets slandered, rhythms get run over, 16-year-olds change their career plans, and the moisture count rises:

The tune is in boom, it’s widely projected
A dictation of orchestration will premier wax-wreckin’
My sister bought a copy, yes, some people still igg it
Don’t play it off, boss; but of course you dig it
Dakim, check the level, geese it up one unit
On beat I think it is; if it ain’t, Chip tune it!
Bites, termites, bloods have been spilt
They’re not fluent; careers are ruined in the house that I’ve built
For subtracting from the wack calculates as a minus
Because K is the finest rapping rhyming ruling royal highness
Leaving phrases I shall insert
Exhilarating dominating pulsating expert…

Forget what you just read. It’s irrelevant. K-Fine is one of those vocalists that, to scratch the adage, could make Webster’s Ninth New Collegiate sound hype. He describes his move as “a marriage of reality, fascination, and imagination, to bring forth my style of ill hip-hop — creating the most illest lyrics known to man.” You can call him the Dennis Hopper of Hip-Hop. I dunno, but K always sounds like he’s about to hyperventilate to me, so hard he pushes the euphoria.

Why does Serious-Lee-Fine continue to do some sort of weird holding pattern over Def Jam, New York, while lesser suckers on other labels make Swatch commercials or black-and-white fashion videos? Some might say samo-samo (see beginning of this piece). Some might say rapper glut at Rush. Some might say V action for Run. (Might be a meal hard to swallow when much hyper lyrics prevail.) We’ll see. I say let Toddy Riley (Kool Moe Dee, Classical Two) finish some of the brothers’ cuts (just to avoid clone-itis), give them to a record company with the juice, gusto, and attitude to move this project correct, then press the dope up. Stand back. Watch SLF rock the earth’s surface.
— Harry Allen 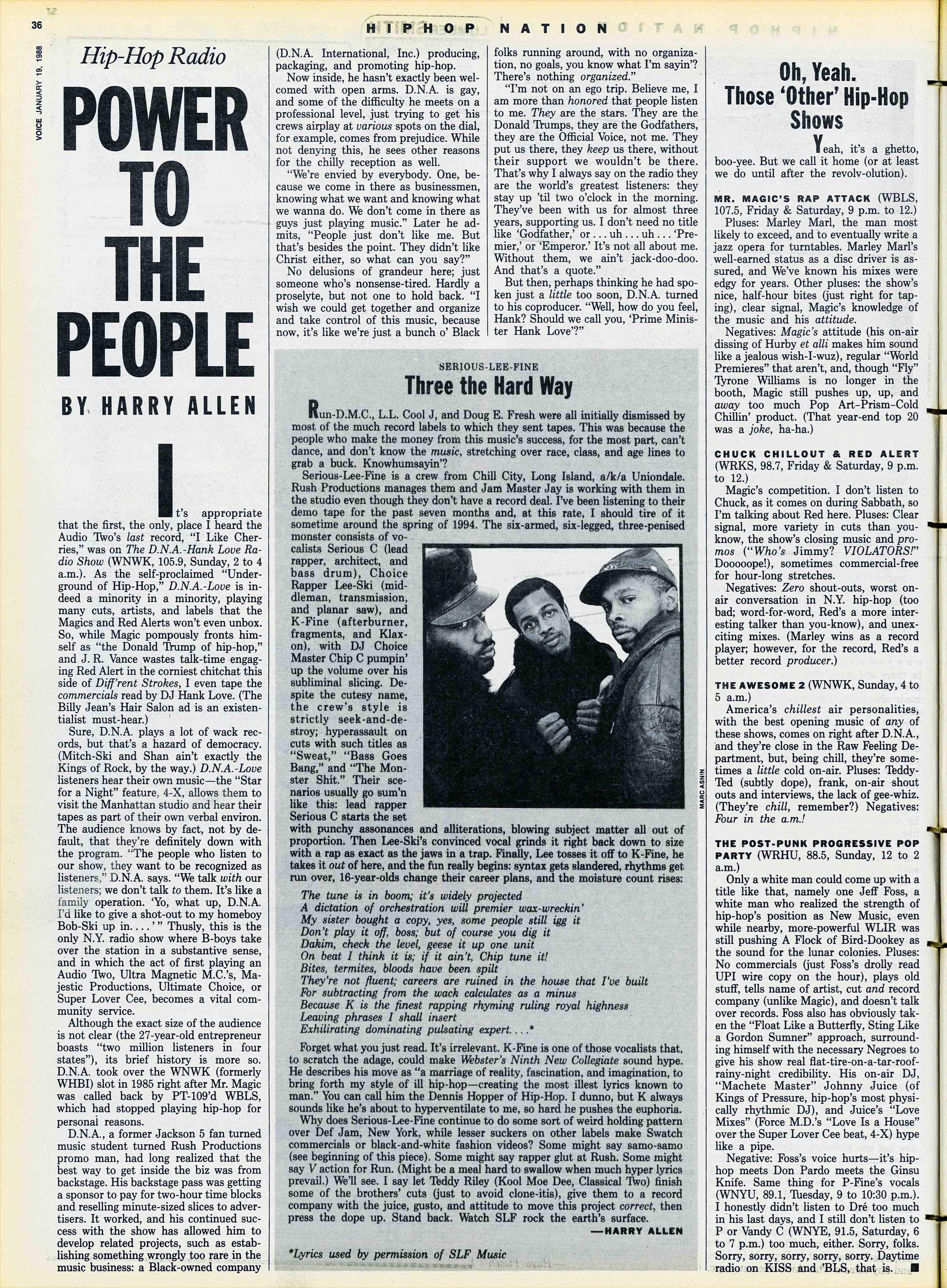