You can almost see her now, accepting her award for Outstanding Lifetime Achievement — Sylvia Robinson, that is, president of Sugar Hill Records — thanking “all the little people who made this possible.” By which she’ll mean folks like Grandmaster Flash and Melle Mel and the Funky Four Plus One and the Treacherous Three. She couldn’t have done it without them.

Robinson founded the rap industry by creating little people. As the first important rap producer, she reformulated a street phenomenon that had been booming citywide since the early ’70s; with the Sugar Hill Gang’s “Rapper’s Delight” in 1979 she dictated what a rap record was. It must have been a shock for the first groups to go into the studio and emerge with a goddamn band behind their rhymes. After all, they were already neighborhood stars using turntables and microphones, building crews around DJs who became mere titular heads once the studio tape started rolling. But the lean funk of the Sugar Hill house band suddenly redefined the sound of rap music, just as the recording process redefined success. The old methods no longer cut it, anymore than being number one in the park applied as the measure of success. Overnight, rappers became dependent on producers. Sugar Hill ruled the new industry by being able to reproduce its sound. And the rappers’ formulaic boasts only made it easier for Robinson to reduce them to beneficiaries of her hit-making machine.

Following Sugar Hill’s lead, producers built machines to duplicate hit records. Left-field flukes like Schoolly-D’s “P.S.K. — What Does It Mean?”/”Gucci Time” notwithstanding, virtually all hit rap records either come out of or generate production machines. If you follow the machines — or their interlabel equivalents, sequels and ripoffs — rather than the artists, it’s easy to see why records become hits. Doug E. Fresh didn’t get a machine going after “La-Di-Da-Di,” another fluke, so Dana Dane moved in with “Nightmares” and Just-Ice with “Latoya,” both blatant imitations that the core hip hop audience embraces without reservation. Full Force and Hitman Howie Tee stamp their golden pop imprint on UTFO, the Real Roxanne, and Whistle. Mantronik’s chilled beatbox methodology produces interchangeable hits for Mantronix and Trickee Tee. Larry Smith’s electrofunk is the essence of Whodini. Rick Rubin will continue to build the Def Jam catalogue by remaking “Sucker M.C.’s” until people stop buying it. And the Roxanne saga (and to a lesser extent, the current Pee-wee craze) proves that if you have a winning formula, you can plug any rapper into it.

Take away that formula, however, and even successful rap acts founder. The Sugar Hill roster for the most part disappeared after the label abandoned its system to copy Tommy Boy’s; that is, after Robinson answered Afrika Bambaataa and Soulsonic Force’s “Planet Rock” with “The Message.” For all its groundbreaking impact, the song marked the end of Sugar Hill’s machine. House drummer Keith LeBlanc had already left the label, and the rest of the rhythm section followed, to be replaced, along with the Chops horn section, by one-man-band Reggie Griffin. In turn, the Tommy Boy acts, particularly Bambaataa, faded when the label stopped using Arthur Baker and John Robie, the builders of its machine.

Run-D.M.C. are the first rappers to dominate their production system. Even when they worked with Larry Smith, Run (Joseph Simmons), D.M.C. (Daryll McDaniels), and Jam-Master Jay (Jason Mizell) always poked their heads outside the machine. They talked about how cool they were (anonymous machine fuel), but also about who they were: where they lived, why they wore those glasses, where they went to college. On their first 12-inch, “It’s Like That”/”Sucker M.C.’s,” they stripped their sound of all music, which was the producers’ handle on hip hop. With just beats and rhymes, they brought rap closer to its original state before the producers took it out of the reach of ordinary schmucks. The single demystified the recording process. A rapper needed access to another world — and a horn section — to make “That’s the Joint,” but anyone with the conviction could have made “Sucker M.C.’s.” By denying the trappings that the machine postulates as the essence of recorded rap, they vanquished the myth of the rapper as an elevated being.

Run-D.M.C.’s myth was like Rocky to everyone else’s Apollo Creed. It had to be a myth; no one could possibly be that square. But like Stallone’s (or Mellencamp’s or Springsteen’s), their myth was more relevant for its roughness, as they offered regular-Joe visions of sex appeal (“If you’re looking for a pet I’ll buy a kangaroo,” from “30 Days”); advice (“Try the school or the church,” from “It’s Like That”); integrity (“Calvin Klein’s no friend of mine/Don’t want nobody’s name on my behind,” from “Rock Box”); and glamour (“Cold chill at the party in a b-boy stance,” from “Sucker M.C.’s”). They were the first rappers to embrace the nobility of the common b-boy. As three middle-class college kids from the suburban Hollis, Queens, they romanticized the street character that other rappers rejected. Message MCs condemned the street. Boastful rhymers conquered by Cadillac. But Run-D.M.C. aligned their image with their street audience. By comparison, the Fat Boys, Whodini, L. L. Cool J, the Sugar Hill Gang, UTFO, Doug E. Fresh, and even Melle Mel all stand above or beyond or somehow apart from day-to-day b-boy life. Run-D.M.C. force you to confront them as people, not as fantasies.

Their career has taken off from two last-minute decisions. The first was to put raps on the bonus beat to “It’s Like That,” which became “Sucker M.C.’s,” the most influential record in second-wave hip hop. The second was the move by Russell Simmons — Run’s older brother, group manager, and Def Jam cofounder — to replace a synthesizer line on “Rock Box” with heavy metal guitar. “Rock Box” tempted them with a new sound, and they took the bait. They made last year’s King of Rock, a producer’s album and a transparent attempt to cross over. Before this album, they’d equated ambition with artificiality, and the excesses on King of Rock, an album they’ve since disavowed, reaffirmed their conservatism.

On their new LP, Raising Hell (Profile), co-produced by Run and Jay with Simmons and Rubin, the group again cuts the crap. Raising Hell is their least ambitious and best record. It’s like their ’84 debut, with a few important differences. Run-D.M.C. was a reactionary aesthetic coup that Raising Hell could never be, because Raising Hell doesn’t advance a new way to make music. It simply finishes what the first album started by making the beats a little harder, a little louder. The rhythms are still mostly electronic, but they swing more like a human drummer. It’s as if, having effectively killed off Sugar Hill-style r&b-based rap, the group is now letting some r&b back in.

Raising Hell is startlingly raw. It cracks along seams, wild dynamic convulsions that are common in shows with scratch DJs, but never make it onto record; production machines traditionally replace DJ’s in the studio. Raising Hell nearly captures the sonic collisions of Run-D.M.C.’s live performance; it stutters, hesitates, and explodes with the jerky rhythm of a DJ. And the seams are the best part — anyone can make a beatbox keep time; it takes inspiration to know how and when to fuck up.

They’ve also found a new way to fuck up on their lyrics. In place of the awkward sermonizing of the debut, Run-D.M.C. hang their quasi-populist lack of ambition on deliberate dumbness. “Peter Piper” weaves a string of nursery rhymes; “It’s Tricky” is about how hard it is to make a rhyme; “My Adidas” is about sneakers; “Walk This Way” is an Aerosmith cover; “Perfection” talks about pet insects; “You Be Illin’ ” revels in someone else’s stupid behavior; and “Dumb Girl” is a cautionary view of the female libido that’s best left alone. It’s disappointing that the group has never matched the one-liners of the first album, and that Raising Hell’s best (“It’s McDaniels, not McDonald’s/These rhymes are Daryll’s, the burgers are Ronald’s”) appears twice. The exception to the stupidity is “Proud to Be Black,” the one forceful indication that Run-D.M.C. can see beyond its middle-class orthodoxy. For once their stay-in-school aphorisms won’t solve the problem, and Run-D.M.C. turn their crunch into the rebellion of a yes-man betrayed.

You can make a lot out of the Aerosmith collaboration (their record company certainly hopes to) but the song merely echoes the album’s conservatism. It’s safer to remake “Walk This Way” than to write an original, especially after the failure of most of the guitar songs on King of Rock. Rubin suggested the collaboration after reading Chuck Eddy’s Aerosmith review in the Voice [January 7]; this anecdote for a future episode on Lifestyles of the Rich and Famous illustrates why Run-D.M.C. were right to insist that rappers are just plain folks. The album’s other guitar song, the title track, is like “King of Rock” done as AC/DC instead of Spinal Tap.

Guitar tunes aside, Raising Hell isn’t a star’s vehicle. As hard as it hits, the album is workmanlike, without indulgence or flamboyance. Run-D.M.C. don’t allow themselves the latitude they had on King of Rock. No Beatles or Michael Jackson references, no reggae — just rap, like a repentant sinner returning to the fold. The only new additions to the Run-D.M.C. lexicon are established b-boy fare: the scratch dynamics, the “La-Di-Da-Di” homage in “Perfection,” the human beatbox on “Hit It Run.”

Like Run-D.M.C., Raising Hell is more a purgation than a breakthrough. But that’s what Run-D.M.C., like all good conservatives, do best. For all their success, and this album is going to sell loads, they still deny the temptations of escape and upward mobility (they sound like they’re bullshitting about their fancy cars, telling the truth about their sneakers). This is a matter for celebration and concern: the album’s triumph is that it fulfills their promise and seemingly leaves no room for improvement. How can it get any harder? Raising Hell is the pure b-boy aesthetic, without apology. Without the machine. 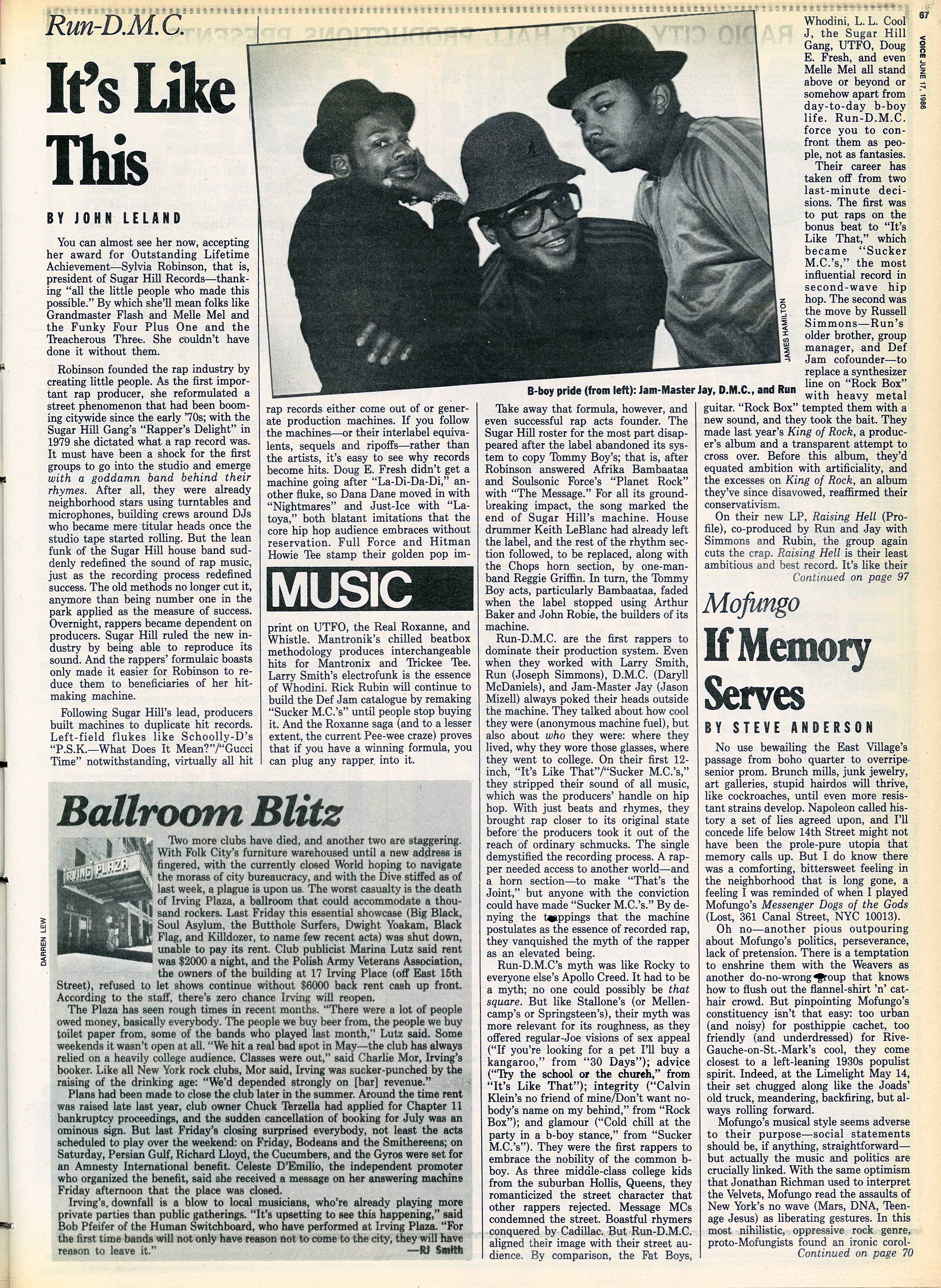 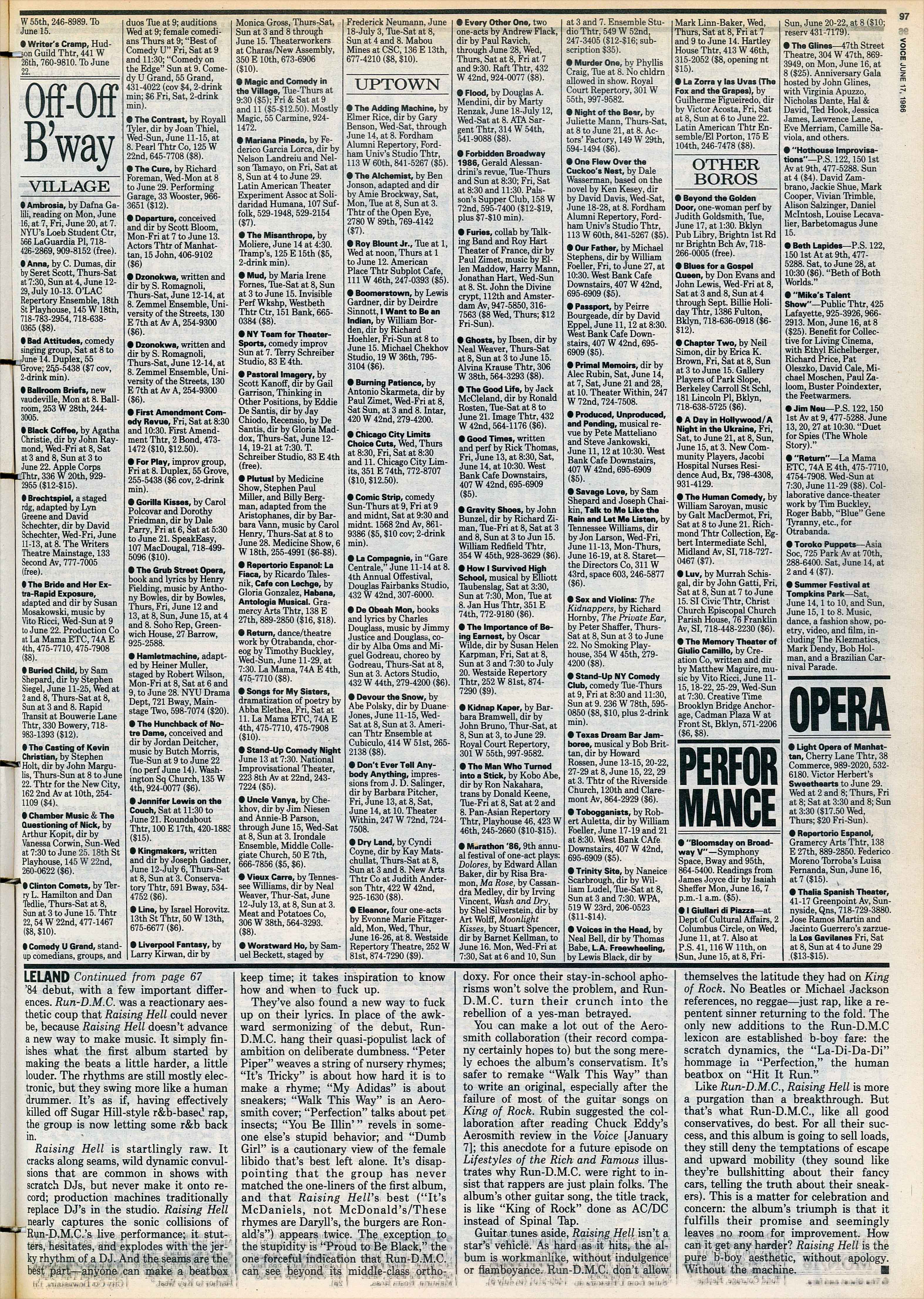