Riding Amtrak between Baltimore and Wilmington the train passes a factory with this insignia inscribed on its side: “Goetze’s Caramel Creams.” Being in the black humor line I immediately grasp the commodity value of this chance sighting. Metaphor is my business, an overweened sense of irony my stock in trade.

Just the other day I was thinking Michael Stewart could’ve been Jean Michel Basquiat in his dread period. Certainly he was lynched for committing the same “criminal act” which put both Basquiat and Keith Haring on the map and in the money. Some guys really do have all the luck. The other night a colleague looks out her Lower East Side window and sees a black guy and a white guy about to rumble; squad car pulls up, two cops jump out, throw the brother up against the wall, jam the nightstick to his throat and let the white guy go along his merry way. And this black guy was so preppy looking she told me. Reminding me of Stevie Wonder’s line about how you might have the cash but you can’t cash in your face. But black folk take themselves at face value too. The other night on the D train I got an Asian couple sitting across from me who seem to be romantically involved. Seated next to them is one very unpreppy B-boy prototype. Couldn’t tell you whether his emotional life was seething or somnolent. You know, one brand of racist mythology speaks of the inscrutable Oriental, another of the evil nigger, but homeboy’s mug is more illegible to this black brother than any foreign face I’ve ever seen. Deadpan? No, home’s visage in a black hole, light may pour in but none shines out. To these eyes he’s a cipher begging for decoding, a signifier crying out for deconstruction and like Bernhard Goetz I’m free to ascribe any negative cast I choose to his character: violent nigger, stupid nigger, evil nigger. The difference and social distance I presume between his blank categories and my powers of categorization, between his presumed unintelligence and my arrogance of intellect grant me this privilege. Forget that given another set of eyes the target for such prejudices could be me or Basquiat, Melle Mel or, for the sake of reportorial relevance here, Run-D.M.C.

Before we go on, consider for a moment that if hiphop does nothing else, it at least draws a few black youth out of the firing line; forces folk to see some young black men as something other than thugs, as possibly possessing a little intelligence, even if only for the duration of an MTV video. Let’s call this the liberal position. For a less tolerant view, cut to the Run-D.M.C. show I walked out on at the Beacon last Saturday (the late show, not the 7 p.m. which went smoothly) not because I walked in on the sight of several hundred black teenagers standing on their seats screaming “do that shit, do that shit” in a game of call and response with a deejay, but because, when people started running out of the orchestra doors yelling about a rumble in the balcony my partner-in-crime and I decided that given the vibes, it was time for our bourgeois black bohemian behinds to get the fuck out of Dodge. Passing, on the way, three cracked plate glass doors and several billy-club swinging gendarmes commanding the scene in front. From a photographer friend trapped backstage I heard somebody was stabbed later that night, that after Run-D.M.C. left the stage pandemonium erupted when somebody said they heard a gun go off, that when she left the theater she hadn’t seen as many cops since the Detroit riots and for the first time in her life she was afraid to be around her own people. Waiting to catch the train she witnessed some of those let out from the show launching Coke bottles at passing trains and applauding themselves as passengers ducked for cover.

From the gitgo, black music of one kind or another, jazz, blues, rock n’ roll, has been charged with promoting sexual promiscuity and perversion, drug abuse, devil worship, crime and violence. Charges which are only as true as they are half the story. Black musical forms have always been born in dangerous milieus, which they sometimes promulgated and sometimes transcended, and hiphop continues the genealogical imperative. Don’t think I didn’t get depressed like a mother-fer-ya (yeah, literally) when homegirl told me about the bottle-throwing episode, but I still believe hiphop can become more the cure of the condition of black underclass youth than a symptom of it. If for no other reason than that they listen to it like they listen to nothing and nobody else. This doesn’t mean it’s a panacea (sorry, I aint that naive), but it can maybe make a few stop and think — especially if they’re taking notes from sources as credible as Run-D.M.C.

Always dug Run-D.M.C. because they dressed like they weren’t ashamed to be identified with the stone B-boys. Like, Melle Mel once said the reason the Furious Five took to the chains and leather look was to match for visual aggression the rock and funk groups they began touring with after “The Message.” Which is funny, considering that the aggression some folk already perceive in less flashy black fashion is tantamount to asking for a couple bullets in the back. Under the circumstances Run-D.M.C.’s stance as raphappy fashion risks could be mistaken for a mere stab at intimidation — except remember that hiphop began as a subculture of resistance to, among other things, the Saturday Night Fever school of leisure wear, and that Run-D.M.C. were dressing down by law long before they made it on MTV. The trashing of a rock museum they do in the new “King of Rock” video proves they can cross over without compromising, and with a vengeance at that. What’s even hipper about them than their remarkable ability to adapt to market demands and maintain their authenticity is their other way of eating their cake and having it too: taking license to crack incisively on white and black culture alike without missing a beat. One minute they’re class-leveling Calvin Klein in language both Marxes would appreciate (Karl and Groucho) the next they’re giving Fs in English to all the other sucker MCs. Shades of Booker T. Washington’s bootstrap philosophy of black economics turn up often enough to make the point they believe in black self-help; invocations of Murphy’s Law as criminal deterrent pop out enough to convince they don’t believe crime pays. In their best raps they use braggadocio to taunt and inspire their audience; their best interviews find them hammering the message home to their peers to stay in school and get that piece of paper. Certainly nobody on the scene, outside of Ramm-El-Zee and Melle Mel, delivers more literate and thought-provoking lines than the duo.

The question is whether, intellectual types and MTV vidkids aside, Run-D.M.C.’s message is getting through to the other (if not their primary one) target audience, namely the hardrocks in the Beacon crowd. The funk-metal truncheons on their new King of Rock have secured their hold on the MTV crew, the dazzling dithyrambic invention of tips like “You’re Blind” will keep the eggheads occupied with their exegeses for days. But penetrating the mentalities of the hardrocks is going to take more of a headcharge than Run-D.M.C. got the voltage to supply. Now, you could say that since nobody else is reaching the hardrock posse, reaching out to them even, that making the attempt is the most that can be asked of the brothers. But in the wake of the Beacon and shit like the bottle throwing, that leaves me thinking the rest of us best jump on the bandwagon and quick. Maybe at least try telling Michael, Lionel, Diana, and Ray that charity begins at home. 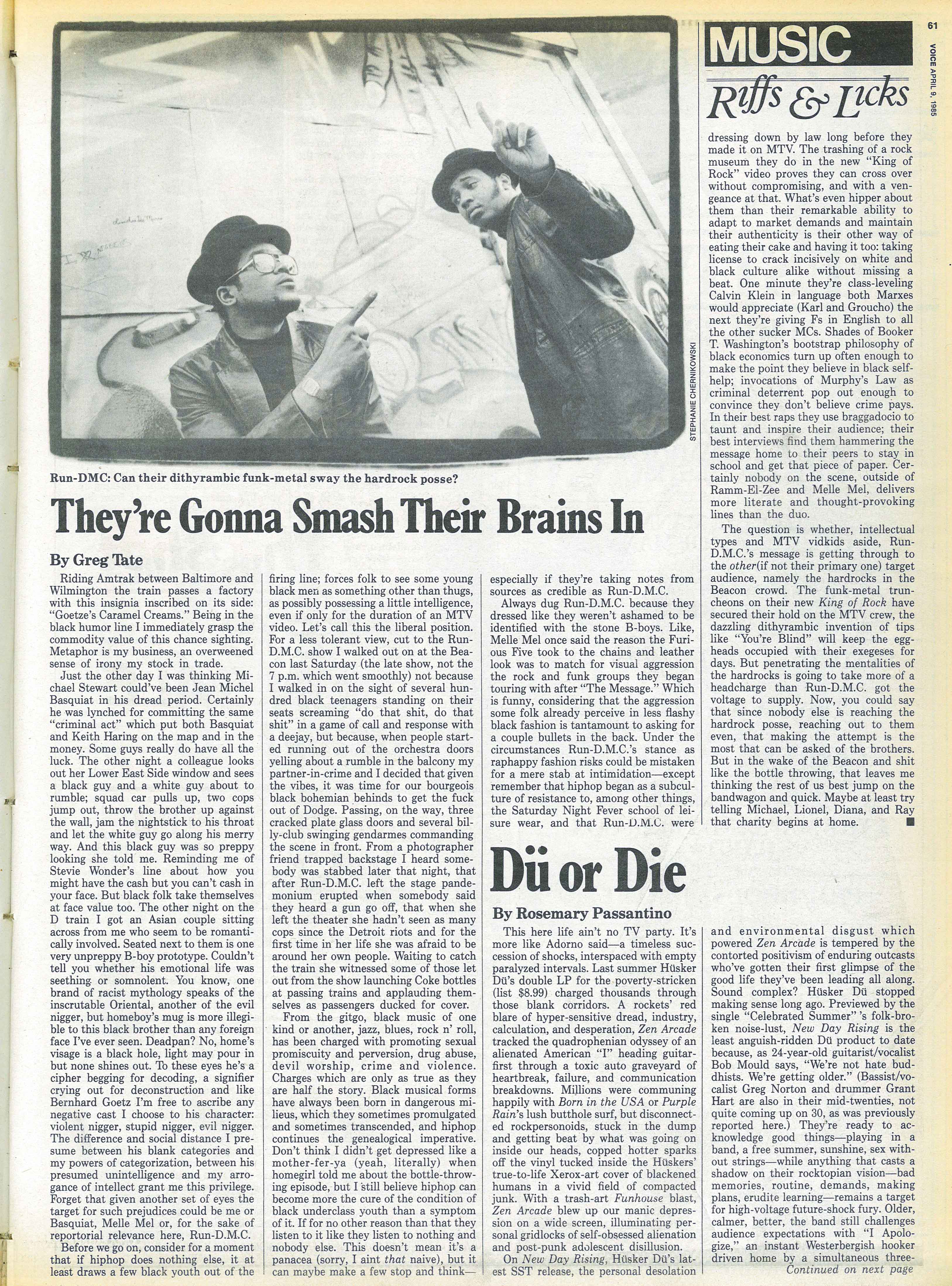 [Ed. Note: As a bonus, here’s the Voice’s first mention of Run-D.M.C., courtesy of Gary Jardim]

Hip-hop’s hook of the season is “It’s Like That,” by Run-D.M.C. and Orange Krush. Producers Larry Smith and Russell Simmons (half the credits on Kurtis Blow’s “Tough”) have cut a “stiff and nervous” beat/sound dominated by a mechanical web of bass bams and snare wacks aimed in part at the new wave club market. Its elemental starkness has an eerie European existential alienation all over it and it’s a hit on (black) radio. Stiff and nervous Babylon ’83. The question haunting rap is, what lies beyond the “it’s bullshit” motif? Alienation? “Money is the key to end all your woes.… Whatever happened to unity?… Disillusion is the word/I just go through life with my glasses blurred/It’s like that/And that’s the way it is.… If you really think about it, times aren’t that bad.”

Anyway, the mix of battering-ram percussion and rough vocals succeeds as polyrhythmic dance and hard-rock compulsion. The real breaks come in the syncopated interplay of drum and electronic shakere rhythms set against corrosive lyrics in “Sucker M.C.’s” (“You don’t even know your English/Your verbs or nouns/ You’re just a sucker M.C./You sad face clown”). Too bad this percussive clamor’s so far from the melodic heart behind John Henry’s hammer. But the lack of real emotion in Run-D.M.C.’s recent show at the Roxy was completely overshadowed by the dark brilliance of Bambaattaa and Islam swinging this new Shango thing and jamming rhythm and sound textures as so many subtexts pointing at “One Nation Under a Groove.” 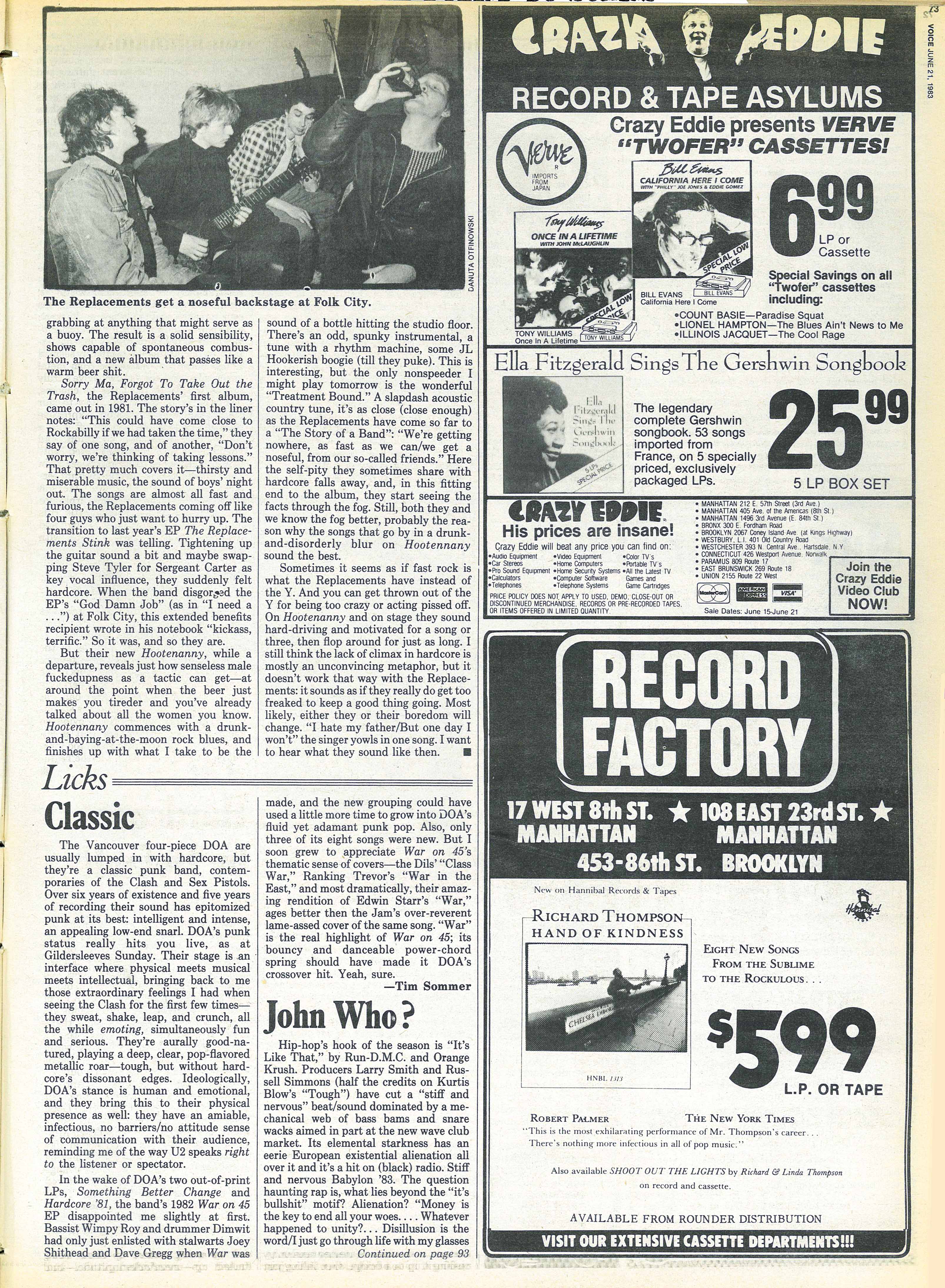 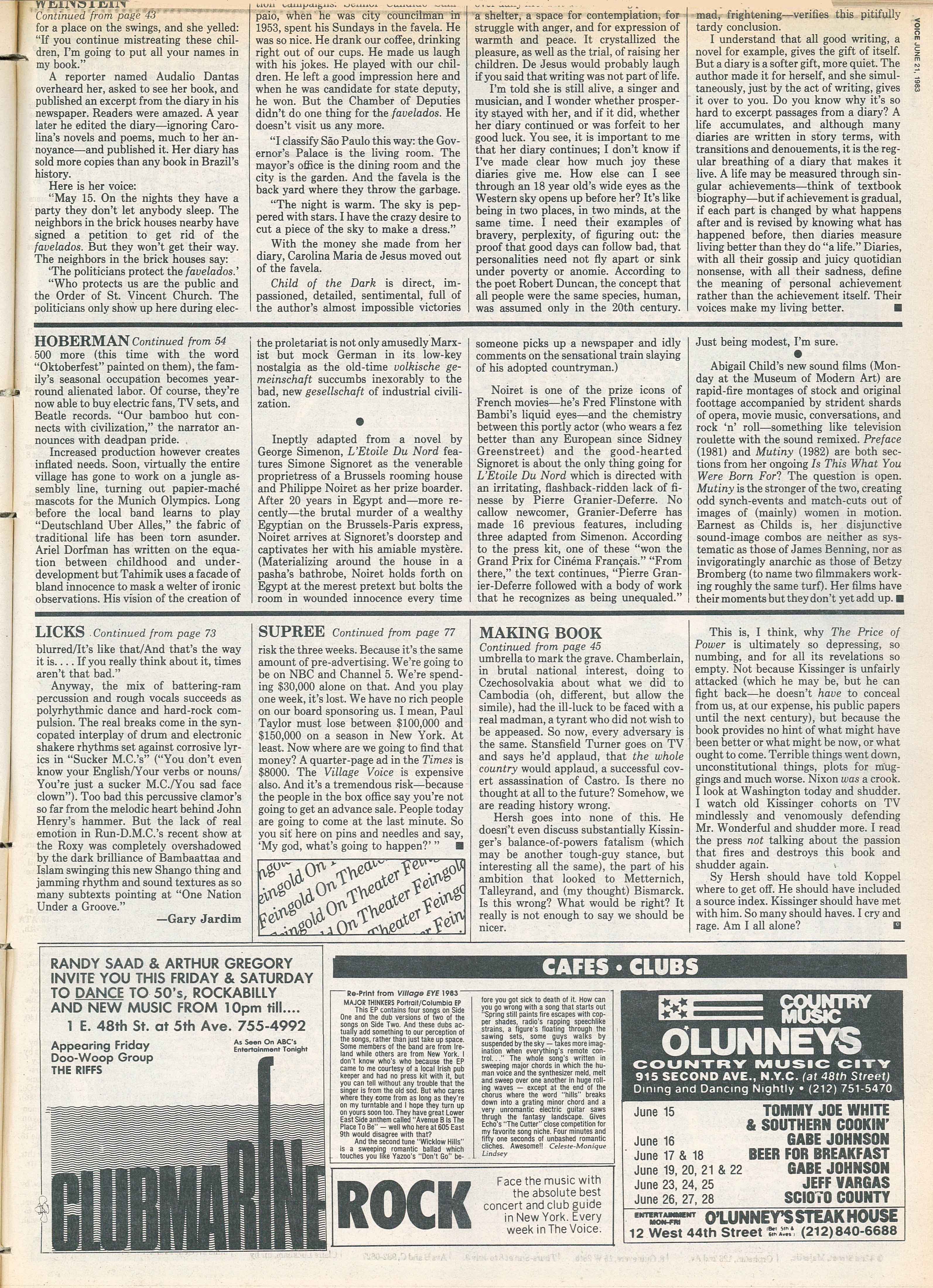