Big city graffiti peaked in the early ’70s, somewhere between the NYC Transit Au­thority’s decision to sic killer dogs on the vandals and visigoths, and the media hoopla that greeted the first graffiti artists show in SoHo.

We had pretty much stopped looking at the walls until this fall, when we noticed something new. The best graffiti suddenly had more to say than just a nickname and number. To be sure, the Communist Cadre had been stenciling slogans like YIPPIES JE­SUS FREAKS AND MOONIES ARE GOVERNMENT for years. But who was writing ONE WOMAN IS RAPED EVERY IO MINUTES — CASTRATE RA­PISTS? Or drawing chalk outlines of fallen bodies with bright red bloodstains? And who the hell was this guy Samo©?

For those of you who haven’t waded through lower Manhattan lately, Samo© is the logo of the most ambitious — and senten­tious — of the new wave of Magic Marker Jeremiahs. Accompanied by the inevitable copyright and usually punctuated with an ex­hortation to THINK!, there are hundreds of pithy SAMO© aphorisms splashed on choice spots in Soho, Noho, and the Village, East and West. A random sampling will give you the idea:

I met the perpetrators of SAMO© outside an East Village bar the other night and they agreed — provided no last names were used — ­to give me a tour of their handiwork and tell me something of its genesis.

Aided and abetted by a tight circle of friends, the bulk of Samo©’s sayings are the work of two sharp, personable teenagers named Jean (17) and Al (19) who share re­markably similar handwriting and an un­spoken agreement about where SAMO© is coming from.

Growing up in Brooklyn and the Lower East Side, respectively, both knocked about quite a bit. Jean dropped out — or was kicked out — of five or six schools. Al eventually found his way to Art and Design, where he was comfortable for a couple of years. Even­tually he dropped out too — it seems he spent most of his time decorating subway cars.

“Oh man, graffiti? Forget it. I was right in there with Snake 1, Phase Too, and all those cats. ’Cause that was my life at that point. Bomb 1, that was me. I must have gone through a hundred different markers before I was 16. Then after that I hung it up.

“But when SAMO© came along it was like whoa! a rush, you know? A reason to start writing again. The stuff you see on the sub­ways now is inane. Scribbled. SAMO© was like a refresher course because there’s some kind of statement being made. It’s not just ego graffiti.”

SAMO© was hatched this spring in the alter­native high school in Brooklyn Heights where Jean and Al ended up. “We were smoking some grass one night and I said something about it’s being the same old shit,” Jean recalls. “SAMO©, right? ‘Imagine this, selling packs of SAMO©!’ It started like that — as a private joke — and then it grew.”

Next, they drew a series of cartoons for their school paper showing people’s faces be­fore and after using SAMO©: “I used to be a lamo before I started SAMO©. Now I get some poontang everyday.”

The etymology of SAMO© took a meta­physical leap in its next manifestation, a short story by Jean featuring a man searching for religion and a store called Religomat, where a salesman with a TV smile explains the pros and cons of the popular brands: Buddhism, Christianity, Judaism, etc. Then the salesman pulls out SAMO©, a guilt-free re­ligion. It works like this: You do whatever you want here on earth, then when confront­ed with your deeds at the Pearly Gates you simply tell God: “I didn’t know.”

Does SAMO© in fact provide an alternative? “No way,” Jean and Al agree. “SAMO© is just a means of bringing it out,” Jean continues. “A tool for mocking bogusness.”

“Right, exactly,” Al agrees. “It makes people think ‘hey, maybe there’s another way.’ But it’s not like we can defend it. We’re really in a vulnerable spot to even talk about it with people from media.”

Talking to people from media was the last thing on their minds this summer as they fu­riously scrawled their message to the city. Jean estimates that he executed some 30 SA­MO©s on a good day, concentrating at first on the subways. “The D train, man, I covered it, ads and everything. And in broad day­light. Half of it, you know, is the arrogance involved.”

“We slowed down a little in June and July,” recalls Al. “But once you run it for that long it starts just coming up.” They became more and more selective, picking their targets. SAMO© AS AN ALTERNATIVE TO GREEK CHEESBURGER EMPORIUMS on a Greek cheesburger emporium. SAMO© AS AN END TO VINYL PUNKERY outside the Trash and Vaudeville boutique. SAMO© AS AN ALTER­NATIVE TO BOOSH-WAH YOUTH IMPERSONAT­ING ’60s PROTOTYPES on Stuyvesant High. Al grins: “Those guys hate us down there.”

Soon, feedback started appearing on the walls. Some of it was friendly — SAMO© CALL HOME AT ONCE! MOTHER NEEDS YOU — and some of it less so: SAMO© AS SHEER TEDIUM on St. Marks Place; SAMO© IS CIA on the Washington Square arch; and, on the Grand Union at Bleecker and La Guardia, a major political graffiti — DEATH TO SOMOZA — edited to read DEATH TO SAMO©.

“They’re doing exactly what we thought they’d do,” says Jean, his voice rising. “We tried to make it sound profound and they think it actually is! That’s like a heavy com­pliment, man.”

Al picks up the thread: “People are so bored that when something seems mysterious and it keeps coming up it’s like ‘Oh wow! What’s going on? We better know about this!’ So they conclude this thing that we’re CIA.… I can’t begin to explain where they got that.”

Their epithet, BOOSH-WAH, seems to pro­voke the most hostile reactions. The word was Jean’s contribution: “This city is crawl­ing with uptight, middle-class pseudos trying to look like the money they don’t have. Sta­tus symbols. It cracks me up. It’s like they’re walking around with price tags stapled to their heads. People should live more spiritu­ally, man. But we can’t stand on the sidewalk all day screaming at people to clean up their acts, so we write on walls.”

Is no surface sacred? They do stay clear of most private property, but government prop­erty and corporations are fair game, especial­ly subways, elevators, and public toilets. What about the millions of taxpayers’ dollars spent each year cleaning up? Jean has a ready reply: “That’s a drop in the bucket compared to how people are getting shafted in big ways.”

Jean is more troubled by his questions. Is it a cop-out to give SAMO©’s story to the pa­pers? Is it anti-cool to take credit for street art? And what of their ambition to some day work in art-related jobs, isn’t that BOOSH­-WAH?

And it should be reported that in the proc­ess of helping me with this story Jean and Al came under some rather pointed criticism from their friends, who worried that a taste of fame would go to their heads.

The strain of these last few weeks is reflect­ed, appropriately enough, in their art. One of their latest, and increasingly rare, creations reads: LIFE IS CONFUSING AT THIS POINT…SAMO©. 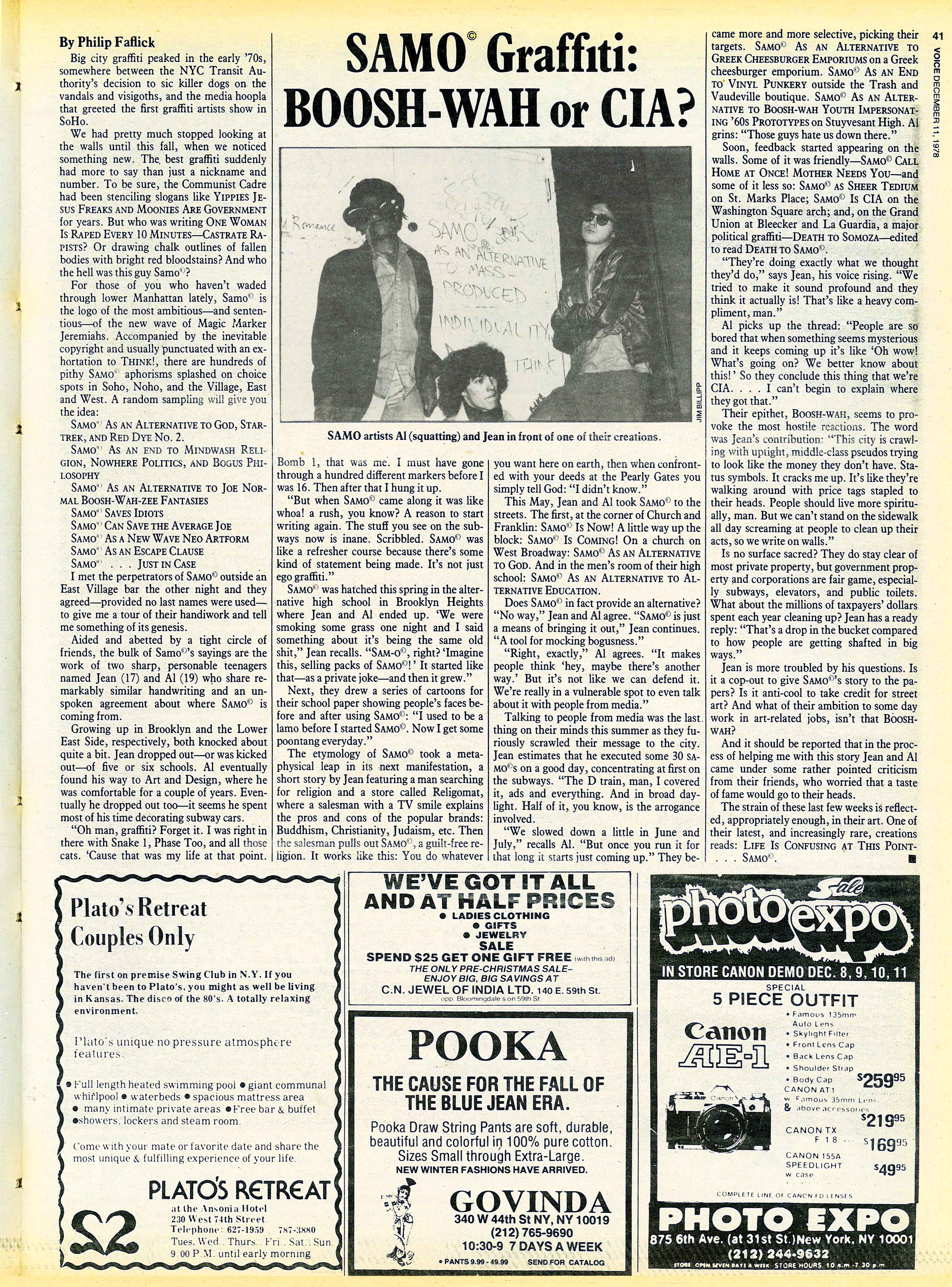