The Village Voice has a long history of brilliant and dynamic music editors, and Brian McManus fits that tradition. In 2014 he decreed that it was time for America’s original alternative weekly to take a look at its hometown’s music and put together a compendium of the fifty best albums ever made about New York City.

Staffers at the editorial meetings campaigned for albums they felt absolutely had to be on the list, ranging from Sonny Rollins’s The Bridge (number 27) to Afrika Bambaataa’s 1983 Death Mix (number 23). With only fifty slots available, the discussions at times got intense. The Velvet Underground and Nico, that seminal New York City band’s first album, was a given — it came in at number 7. And, of course, Mr. New York himself, Lou Reed, had to be represented as well, and everyone knew the obvious choice. But I made a forceful pitch for a different album, one that also featured Lou’s partner in rhyme (and assonance, and feedback, and distortion, and abrasively transcendent melodies) from those heady days of the Exploding Plastic Inevitable — John Cale. I lobbied for and won a spot on the list for 1990’s Songs for Drella over Lou’s own musical broadside New York.

That did not sit well with some of the Voice’s readers, leading us to use a quote from one angry comment as the headline to a follow-up article: “ ‘I Fucking Hate This Generation’: Memorable Comments on Our 50 Most NYC Albums Story.” In that piece McManus allowed me space to double down on my unpopular choice, and so it was with more than a little satisfaction that I recently came across this insightful 1989 review of a very early live performance of the ambitious Drella song cycle. Rock writer Rosemary Passantino first captures the flavor of that preview night: “It was an international crowd dressed in black, black, and black. French, Spanish, and Czech conversations blended with Brooklyn and New Jersey accents.” Then she goes on to nail one of the most compelling aspects of Drella, which to this day helps set it apart from the two songwriters’ solo catalogs — and indeed from their entire Velvets’ output: “Reed and Cale’s familiar jagged rhythms and raps still surprised, like veteran street fighters’ broken bottleneck swipes…The tension of ‘Black Angel’s Death Song’ remains, but the music was more exquisite, under glass, stripped of the jam panic of youth, ego, and addiction. Cale boxed Reed into his minimalist corner, while Reed bullied Cale beyond his neat charts.”

In other words, both artists had matured and were again — just like in the Velvets’ most uproarious days — arriving at a sonic space very different from what either could do on his own. Although there was no love lost between the duo after their acrimonious break in the late 1960s, the contrastingly talented collaborators rose to the occasion for the sainted Andy — soared, in fact, to some kind of heavenly melodic realm their devout Catholic subject would have (perhaps did and does still) appreciate. 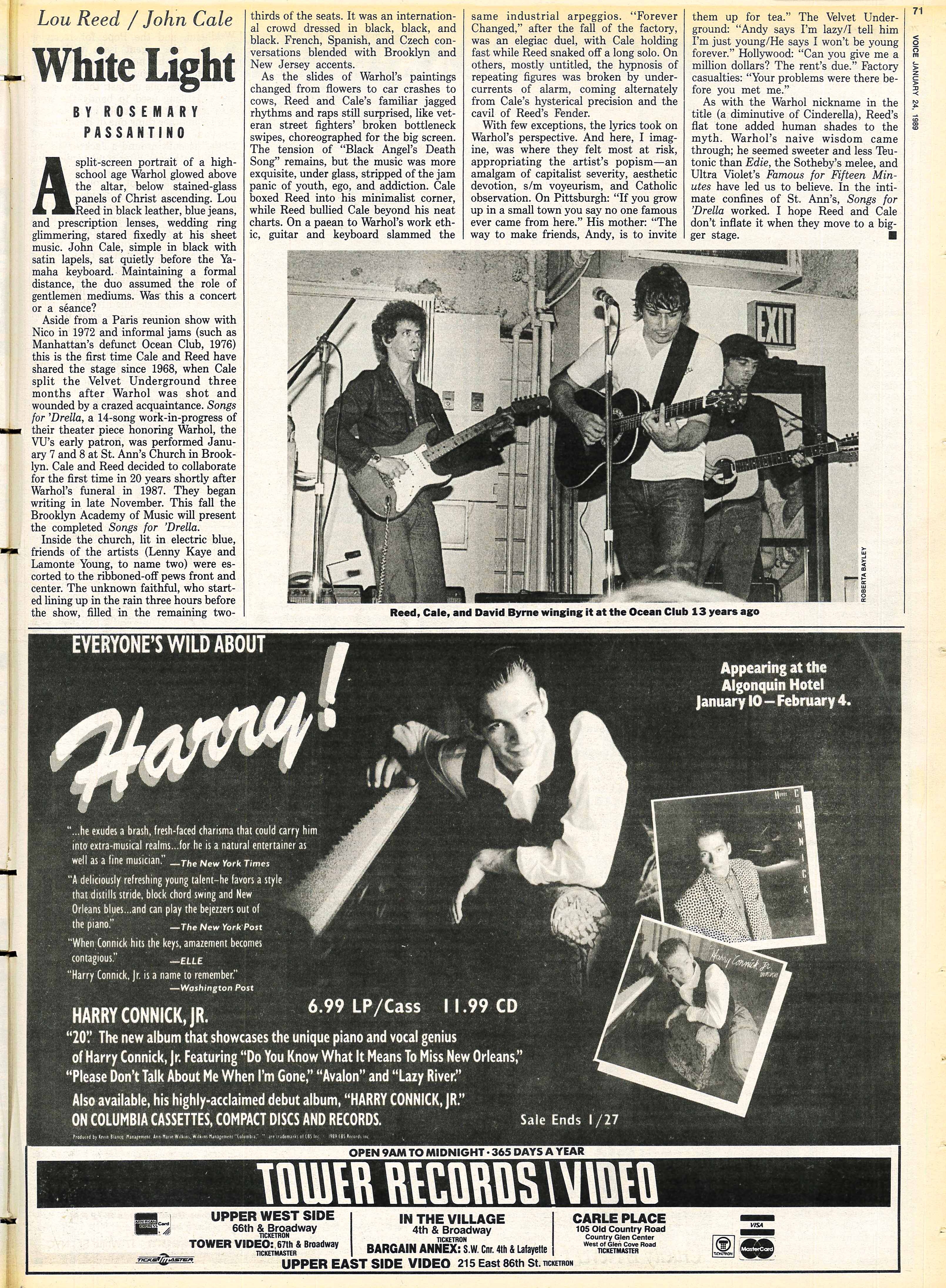