At one point or another on New York (Sire), Lou Reed commits every mistake in the activist singers’ handbook. Too often, these protest lyrics are gracelessly over-explicit, leaving you no room to discover anything. There are ironies so predictable that hearing them savored sets your teeth on edge, and moments of pathos undermined by their agenda-serving function. The blunt speech makes the sloppy thinking stick out — you want to know more precisely who’s being indicted, or accused — and one line exposes a whole style’s built-in fallacy: declaring “This is no time for phony rhetoric” is rhetoric. Beyond that, our poet of the heart’s back doors is now writing about subjects he’s only every bit as on top of as any newspaper reader. Sometimes less — it’s Richard Secord, not William.

I like the record better every time I play it, and I play it all the time.

Musically, New York’s among his very best. It reads worse than it sounds; irrespective of their other qualities, when you listen with lyric sheet in hand the words crowd out what his voice is doing to and with them, not to mention everything else going on. Once you quit reading, you’re hooked, even though three songs or so still sound lousy.

I could talk forever about just the guitar sound on New York, how basic it is, and how infinite. But it’d be bad faith to take the art and dismiss the politics — I don’t like the distinction, and I do like the politics, though Lou seems only fitfully aware that artfulness isn’t their enemy. I respect this album, and Lou and I do go way back (on my end anyway), so I owe my lover’s quarrel with it and him my best shot.

Admittedly, hearing a politicized, socially conscious Lou Reed is weird. He hasn’t worked out how he feels about those associations either — after including “Bono” on a list of fanciful names for his unborn child in one song, in another he denounces self-righteous rock singers claiming a direct line to God. More broadly, he can’t make up his mind if his message is best served by keeping the messenger unobtrusive, or whether he should remind us that he’s Lou Reed, who after all has a distinctive take on this stuff.

The unacknowledged subject of New York (I assume the title’s a switch on ’73’s Berlin: he used to be out there, now he’s right here) is Reed’s own change of heart, and his coming to grips with how best to honor the demands that today’s political imperatives put on a materially comfortable, middle-aged avant-gardist. In some ways, the submerged themes are more provoking, and almost certainly more pertinent to his actual audience, than the trenchant but unsuggestive narratives packing the album’s surface — people getting shot, blighted ghetto lives, bad crud washing up on the beach.

Well, Lou can’t live without dichotomy. But this born aesthete has usually framed the argument with himself in different terms. Up to now, his solo career was about the choice between his faith in rock & roll primitivism and — contradictory, he thought — high-art aspirations. At least in the liner notes, that schizophrenia crops up again here: Lou goes out his way to say you can’t best the basic rock & roll combo, but also directs that New York should be experienced in one sitting, “as though it were a book or a movie.” (Why not as though it were an album? you wonder.)

In the grooves, on the other hand, snaggly, unadorned riff-rock wins out, to its and Lou’s permanent glory. But while I delight in New York’s great noise, I find the rationale behind it as specious as I did the high art vs. riffraff dilemma. I think Reed’s now willing to accept basic rock as his best medium on the grounds that it’s so serviceable — i.e., that it’s generic structures have grown so familiar that today they can carry any message desired, the same way folkies conceived their use of Appalachian or Elizabethan ballads. While the music sounds wonderful, it doesn’t do the job he wants it to.

“Romeo Had Juliette,” the opener, does achieve not only grit but immediacy, its signature guitar phrase impatiently wheeling past every billboard the lyrics put up. (All right, fuck it: it’s cinematic.) But most often, the music doesn’t support or amplify what the songs are saying — except in melodramatic lapses like the climaxes of “Strawman,” the worst cut. On “Dirty Blvd.,” Reed brings in Dion on the coda, but instead of being brained by the intended irony — here’s what the Belmonts’ street corner looks like 30 years later — you’re just blown away by the beauty of Dion’s vocal, which takes off from the sputter-butter riff and makes the same notes, well, sing.

Above all, the sound’s autonomy keeps reminding you that Lou’s coming to his subjects from the outside. It isn’t as anachronistic as folkie ballads, but it isn’t contemporary either. It stays identifiably his, and even more identifiably not theirs — the urban underprivileged he’s depicting on the record’s most problematic songs.

They stay a “they” in other ways, too. The archetypal Lou Reed song makes you feel compassion for somebody you never understood and never expected to feel compassion for. Here, though he tries earnestly and usually unsentimentally to imagine his way inside the skull of, say, a Latino teenager on the Dirty Blvd., you never believe he met the kid. You also know beforehand that compassion’s the emotion you’ll be called upon to feel.

Folkies turn the disenfranchised into victims the same way bureaucrats turn them into statistics. Reed only commits that sin outright once, on his Vietnam-vet tearjerker “Xmas in February” (the title tells it all). More characteristically, and astutely, his subject is brutalization: these aren’t the noble poor but the degraded poor, and even at his remove Lou understands that the worst of what society does to you is what it makes you do to yourself. On “Endless Cycle,” he dresses in different socioeconomic drag the Oedipal patterns that have long fascinated him autobiographically, to modest, persuasive effect — only the title is schematic.

Among the other songs, “Sick of You” is the sort of sardonic-surreal bead-stringing — shaggy-dog protest — that hasn’t ever quite worked for anybody. Faring considerably better is “Last Great American Whale,” which you expect even less of — Lou the environmentalist is his one role here that always throws you. But in making his endangered species a mythical beast, the singer can endow him with wonder (“They say he could split a mountain in two/That’s how we got the Grand Canyon”).

Still, the shift in tone between these cuts and “Halloween Parade” is the difference between caring about something because you know it’s important and caring because it’s important to you. Honesty begins at home; as Lou takes in the sights on Christopher Street on the gay community’s national holiday, noting which faces are familiar and which are missing forever, you’re moved by the realization that in a sense this is the return of the prodigal son. His acknowledgement that to him AIDS is a death in the family is, among other things, reparation for his denial of his gay past in the ostentatiously heterosexual albums that have followed his marriage, an apostasy for which many gays probably never forgave him. This album’s finest moment is the throwaway line at the end of this song, voicing a hope as determined as it is unwarranted: “See you next year.”

“Halloween Parade” is also almost the only song whose specificity fully lives up to the album’s name. If anybody can claim New York as a title, it’s Lou; the irony is it would’ve fit nearly any of his other solo LPs better. Here, he’s so bent on being all-inclusive that he generalizes too much — what true New Yorker gives a fuck about the state of the rest of the union? This Jersey homeowner is most believable when he caps “Hold On” ’s catalogue of flashpoints with “That’s New York’s future, not mine.”

Partly as a result, left sounding more anomalous than it probably needs to is “Dime Story Mystery,” Reed’s farewell to his old band’s erstwhile patron, Andy Warhol. His sense of occasion for once accurately recognizing the obvious move as the right one, he designed the song to bring back memories of the Velvets, both in the flesh (Maureen Tucker sits in on drums, as she does on “Whale”) and in spirit (an uncredited string part simulates John Cale’s viola). Even the fact that the religious imagery feels pretentious also makes it feel apt. The problem is that “Mystery” is the final cut, leaving unresolved an album whose structure demands that it end with a definite Yes or No. It would’ve made more sense to close with “Beginning of a Great Adventure,” the tune about Lou’s impending or anyway potential fatherhood, or would that have been too Hannah and Her Sisters-ish for him?

Whether he’s expecting or not, Lou sounds rejuvenated. Getting politicized may not always make him more interesting, but it sure makes him sound more interested. Even so, I wonder what it means that my favorite song on New York is the one whose politics I most disagree with. “Good Evening Mr. Waldheim” disposes quickly of its early, unexceptionable targets — Waldheim for being Waldheim, and the Pope for receiving him — to take urgent issue with Jesse Jackson over his imputed anti-Semitism and refusal to repudiate Farrakhan.

The ironies pile up fast: the Jew doing the chastising used to bandy the work kike around pretty freely in interviews, and for another thing one of Reed’s inspirational numbers here, “Busload of Faith,” is built around a Jacksonian image. Nevertheless, after some sententious moments (“What about people right here right now/Who fought for you not so long ago”), Lou reluctantly decides that he and Jesse share no common ground.

I like the song partly because its sprightly tune strikes just the right conversational level, before at some imperceptible moment ratcheting off into what you only gradually notice is a ferociously intricate guitar duel (both Reed and co-guitarist Mike Rathke sound like they’re playing through clenched teeth). I like it more because its tension gives it something even the best cuts here otherwise lack, namely developments: you really want to hear whether Lou’s good will or his doubts will win out in the end. Though Reed would hardly see it this way, the song’s existence is a tribute: you can’t imagine a singer addressing another politician this familiarly, at least with any but ironic intent.

But I like it best because I disagree with it, and therefore have to think about why. That challenges me in the way political music is supposed to, and seldom does. In a recent interview in the L.A. Times, Lou backed off from implying that his album could change people’s attitudes; instead, he defended preaching to the converted, which he described as giving sustenance to people who might otherwise believe that no one else felt as they did. It’s an interesting justification — if only since it lines up New York with the rest of his oeuvre in ways you might otherwise have missed — and I bet anything he didn’t think of it until after he’d finished making the record. 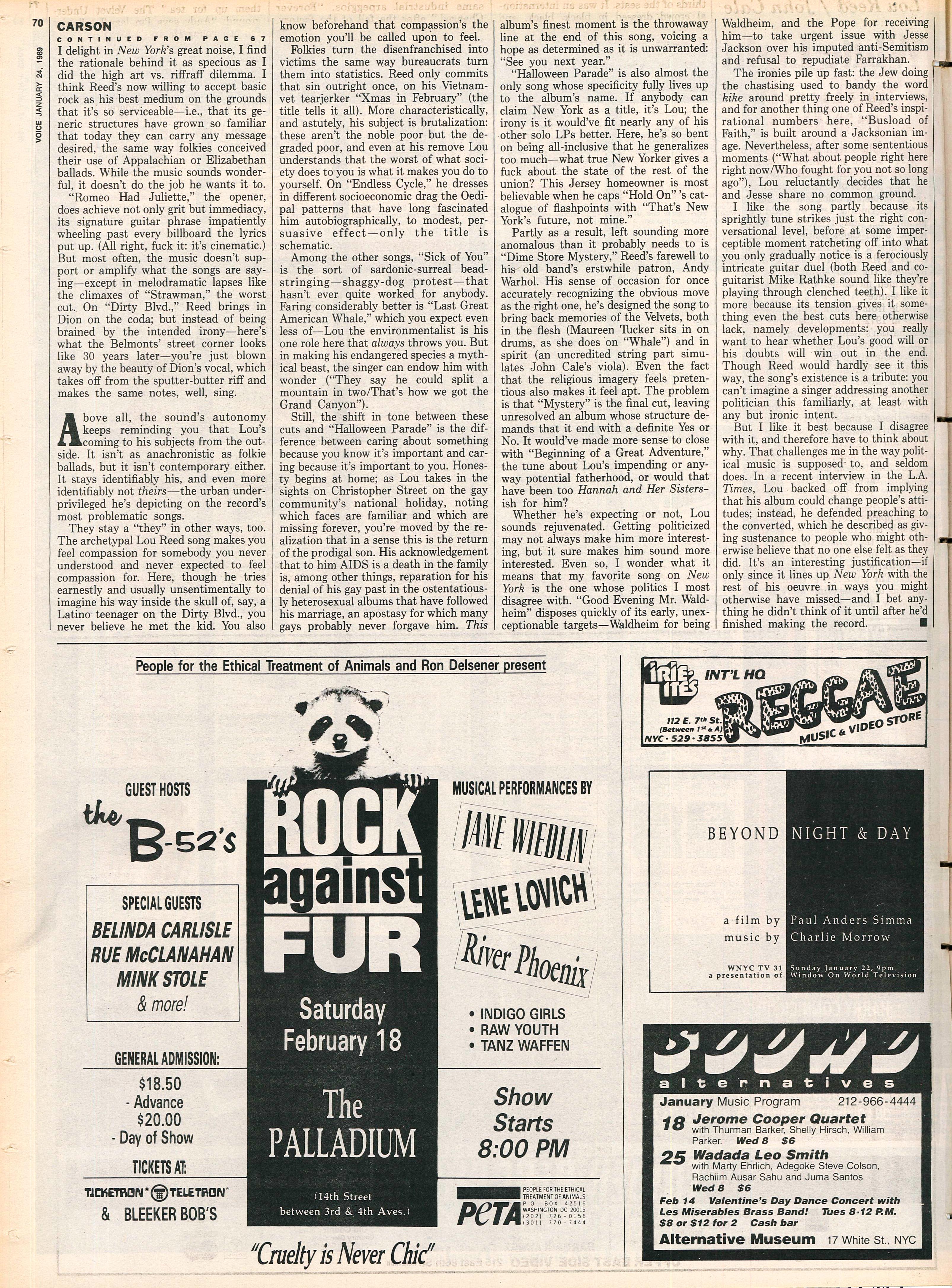 This article from the Village Voice Archive was posted on March 6, 2019