Pulling No Punches on ‘The Rumble in the Jungle’

[Archivist’s note: For the November 7, 1974, issue of the Voice, the rising young writer Jamaica Kincaid filed a report on going to the Victoria Theatre in Harlem to watch a simulcast of the heavyweight bout between challenger Muhammad Ali and reigning champion George Foreman. The fight was being broadcast live around the world from Kinshasa, Zaire (now the Democratic Republic of Congo), to an estimated one billion viewers, the largest audience in history at that time.

The piece displays the future award-winning novelist’s pungent prose style and insightful ear for dialogue. Kincaid, like much of the planet’s population, was clearly enamored of the handsome and charismatic Ali. By contrast, she is pretty hard on Foreman, saying that he “fell into the un-appealing low-tone category.” And that night, at least, Foreman and Ali fought with all the bad blood in the world between them. Years later, however, that would not be the case, and Foreman himself would give some insight into why Kincaid had been so charmed by Ali up on that screen. In 2003, a boxing writer asked Foreman why he thought he’d lost that epic battle to Ali, who had missed three and a half years in the ring because of his refusal to be drafted during the Vietnam War. It was partly, Foreman replied, because Ali came to that African country as a figure beloved for his outspoken courage both in and out of the ring: “He heard them chanting his name and said, ‘I’m not going to lose.’ That’s where the stamina and taking my punches came from: They loved him, and I love him too. He’s the greatest man I’ve ever known. Not the greatest boxer — that’s too small for him. He had a gift. He’s not ‘pretty,’ he’s beautiful. Everything America should be, Muhammad Ali is.”

Below, in honor of what would be Ali’s 77th birthday this Thursday, January 17, we reprint Kincaid’s article in full. —R.C. Baker]

The Triumph of Bad and Cool

“ ’Cos black is so bad
And white is so sad.
Ah said it
Ah meant it
Ah really re-pra-sent it.”
— Street jive heard in Cambridge, Massachusetts

Black boys are bad. They are bad and they are cool. They are so bad that sometimes they do indescribable things. White boys are not bad and they are not cool. But sometimes they like to think they are. When white boys want to play bad they walk through Central Park at midnight and then write about it. That is not bad and anyone who makes a living that way should be paid in Puerto Rican furniture.

Last week Muhammad Ali did a few things to show that he was the baddest and the coolest. He beat that chump of a champ George Foreman in eight rounds; he became the only authentic, living hero on the face of this planet, and then he proved himself to be the only viable personality left over from the ’60s. It was just glorious. Allah now has oil and a world boxing champion. Could any god ask for more?

I saw Muhammad Ali do those things at the Victoria Theatre in Harlem on Wednesday night. So did a number of other people, most of them men who bore the marks of former bad boys. In any case, they spoke that way. They used the word nigger very loosely and they made it sound worthwhile and respectable. They also used the word faggot a lot which they did not make sound worthwhile and respectable. In these circles, I discovered, faggot has replaced the word mo’fucker.

It was a very un-slick audience. No one looked as if they had gotten dressed up for the event. The closest thing to being glamorous anyone came was one man who walked around with an orange-coloured Panasonic cassette player. Lots of people carried brown paper bags which held bottles of stuff. Yes, it was a low-tone crowd, but a very bad low-tone crowd.

Most people were for Ali. You could tell because no one bought the Foreman posters. That wasn’t a good sign for Foreman. A bad man ought to have the bad people behind him. Well, Foreman might be bad, but he wasn’t the baddest. People were going crazy in the aisles telling each other how Ali would do it, in what time, in what style. It wasn’t entertainment, it wasn’t politics, it was going to be vindication. Ali became a redeemer of sorts.

There were lots of guards in the theatre and they all wore dark glasses. It made them look very ominous but they were really quite nice. They saved choice seats for themselves. I sat next to one named Michael Finch. There were some things he wanted me to know.

“Muhammad represents all black manhood. He’s got the pride of his people. He fought against America for himself and for his people. Aside from all that, I just dig his poetics. But I tell you he gonna give that Foreman what’s his. He gonna open his eyes, then he gonna close them, then he gonna put a tin cup in his hand and put him on a street corner where he belong.”

Then. “What would happen if the picture won’t come on? I tell you if that picture don’t come on you’ll see hell up in Harlem. Hell. I’d throw off this stuff and pretend I’m one of you all.”

Michael Finch had an opinion on everything. When the image of David Frost, who acted as one of the hosts, first appeared on the screen, he said, “What’s that faggot doing up there? He don’t belong in no fight. He should be home with his wife drinking coffee and dipping doughnuts.”

He called Joe Frazier a faggot and a turkey. He called George Foreman a faggot and a monster. He called everyone he didn’t like a faggot. When he saw Muhammad Ali in a pre-fight interview, he said, “He’s a terrible nigger, man. I tell you that nigger is bad.”

I learned a number of things that evening.

1. Muhammad is the cool way of referring to Muhammad Ali.

2. When a black person uses the word nigger it can be a positive thing or a negative thing. It all depends on a number of complicated variables. White people in general, however, are not allowed to let the word even cross their minds. Michael Finch said that nigger is a bad word and white people just don’t measure up as far as badness is concerned.

3. The announcer said that other people had said it (and I think he meant the fight) couldn’t happen in the deepest part of Africa, but here it is. This was followed by random film clips of downtown Zaire. Well, it is happening in the deepest part of Africa. Downtown Zaire has wonderful, big skyscrapers. It looked just tremendous. The World Trade Center may be hideous in Manhattan but it would look just fabulous in Zaire. Skyscrapers, like polyester, may be the birthright of Third World consumers.

4. Zaire has an authenticity program that promotes and encourages native customs that Europeans used to consider vulgar and primitive. Before the fight the close-circuit as well as the actual audience were entertained by Zairians performing their own various tribal folk dances. It was very elaborate and suggestive and you saw that the Soul Train Dancers didn’t invent the Funky anything. Perhaps it goes to prove that this particular racial group is just all round rhythmic. Michael Finch said he liked the way those people get down. In any case the fact that authenticity programs and skyscrapers can exist side by side and find appreciation under the same national umbrella is somehow remarkable.

5. The Zaire River used to be called the Congo River. I don’t know why they changed it. Congo seems like such a nice name for a river.

6. President Mobotu, the President of Zaire, is very stylish and very handsome. He wears a leopard skin pillbox very well.

Around 10 o’clock Muhammad Ali entered the ring. The audience in the the theatre rose to its feet and cheered. Actually, they said, “Ali bomaye.” [“Ali, kill him.”] The tribal spirit is very contagious. He looked like a movie star, the way he strode into the ring. His face looked smooth as a peach, his hair was nicely done — no split ends. Then he took off his robe and flexed the muscles in his arms. Gosh! He has the best pair of collar bones you have ever seen on any screen. Muhammad Ali before the fight looked so precious. Muhammad Ali after the fight was a little rough in spots. He clowned a little and led the audience in the Ali bomaye chant. It was quite heroic. I thought he was just wonderful, he said he was just wonderful, the audience in the theatre told his video image he was just wonderful.

Five minutes or so later George Foreman entered the ring. The audience booed at him. He didn’t have the grace of Ali at all. And besides he had lots of split ends. He just doesn’t have the face of a hero. In a pre-fight interview, Ali said that the way he psyched himself up for this fight with Foreman was to watch lots of old horror movies like “The Horrors of Count Dracula” and “The Return of the Werewolf.” Well, it is true that Foreman looks like a big black mound of brute force which is not the sort of thing you want to meet alone in a deserted alley. Foreman fell into the un-appealing low-tone category. Ali was high tone all the way and you can’t get any badder than that.

At the end of it all Foreman the chump was beaten by Ali the Champ. That was bad enough. But really the baddest thing in that whole fight was Ali leading the crowd in the Ali bomaye chant somewhere between the 4th and 5th round of the fight. Now that is so bad and so cool. It took the concept of bad and cool further than you ever dreamed it could go.

Foreman is now so ashamed of himself that he goes around telling people that Ali is a credit to his family, race and boxing. Maybe. But Ali says he is a credit to Allah. I believe him. It is the year of Allah and all you foolish people who think someone else is coming, good luck. But just remember, I told you first: When he comes he’ll be riding a camel, not carrying a cross. 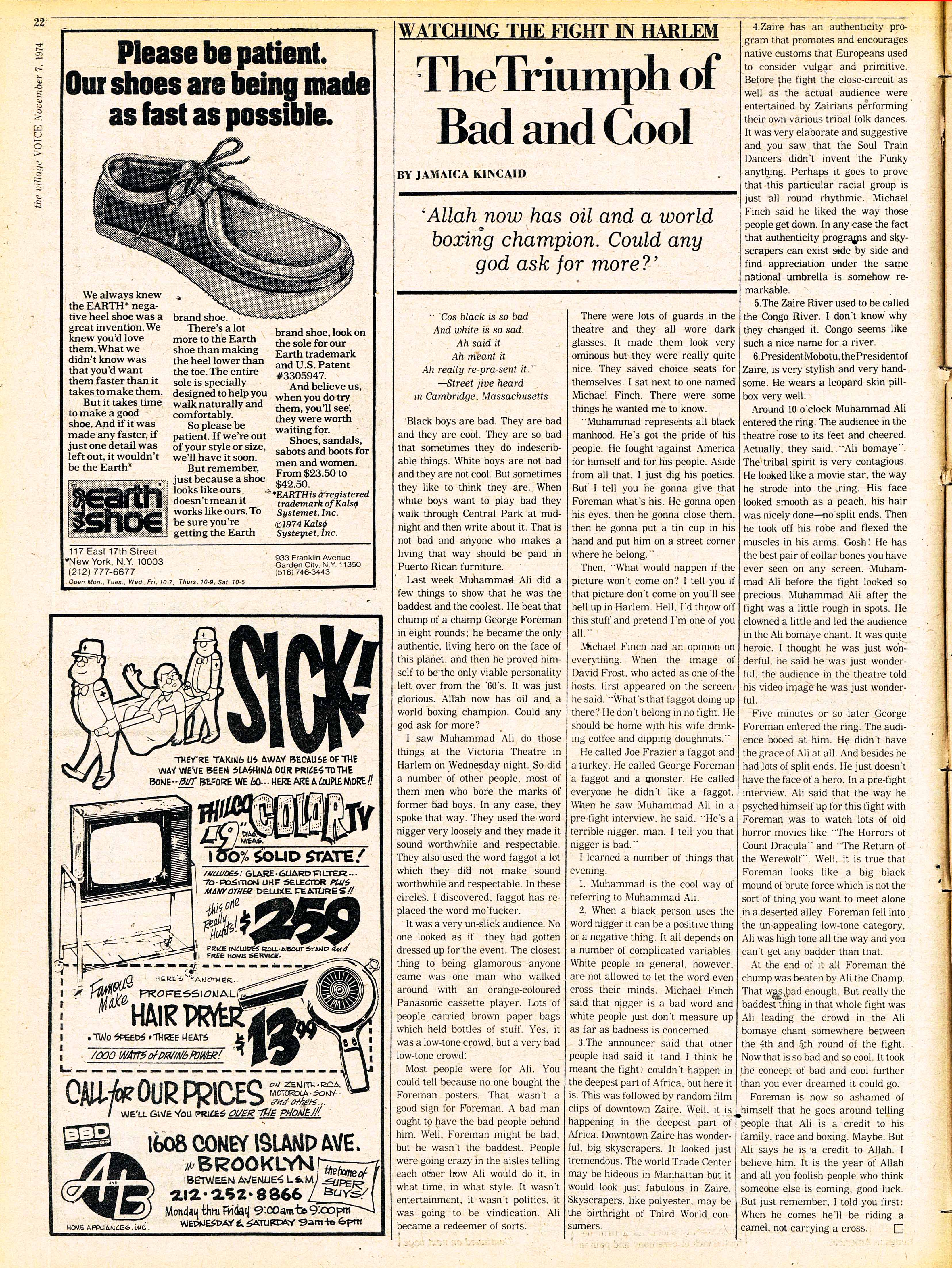