[Archivist’s note: January 6, 2019, will be the (appropriately) silver anniversary of the day figure skater Nancy Kerrigan was whacked on the right leg by an unknown assailant. Video taken shortly after the attack reveals Kerrigan in anguish on the floor of a corridor in a Detroit sports arena, famously wailing, “Why? Why?” and then explaining to medical personnel that she’d been hit with something “really, really hard.” It turned out to be a police baton used by an associate of the husband of Kerrigan’s skating rival, Tonya Harding.

The perp was quickly caught, and the ensuing investigation implicated a number of people in Harding’s orbit, though she denied any involvement in the attack. Both skaters went on to compete in the 1994 Olympics, in Lillehammer, Norway, adding a soap opera gloss to the proceedings that was beyond the pale even for this most high-strung of competitions. As Voice senior editor Stacey D’Erasmo wrote in a postmortem in the March 8, 1994, issue of the paper, “Figure skating, like the Miss America pageant, often resembles some peculiar, outdated girls’ school dedicated to preparing its students for a world that doesn’t exist.”

Kerrigan persevered, and won the silver medal. In what could be seen as a subplot to the whole tabloid drama, some commentators believed she lost the gold to Ukrainian skater Oksana Baiul because of the lingering Cold War animus of a judge from the former East Germany.

D’Erasmo points out that both Kerrigan and Harding were blue-collar strivers, but the attack “added the shadow Kerrigan needed to shine more brightly.” The Voice editors also pulled excerpts from an article by Abigail Feder that had appeared in the performance-studies journal TDR, which called out the prevailing belief that women athletes are overly dependent on family support: “When Daniel Kerrigan would have given all credit to Nancy — ‘[It’s] all her work. She does it all.… She came here on her own’ — [the commentator] turned to her mother and persisted: ‘Doesn’t it really take a family commitment, Brenda?’ ”

In 1996, two years after the Voice story was written, D’Erasmo told an interviewer, “Perhaps what still fascinates me most about these two reluctant icons is that both are trailed by enormous clouds of things we can’t see.” Even a quarter-century on, with a major Hollywood biopic of the skaters already in the rearview mirror, the clouds have never completely parted.

Below are both Voice takes on this chilly tragicomedy. —R.C. Baker] 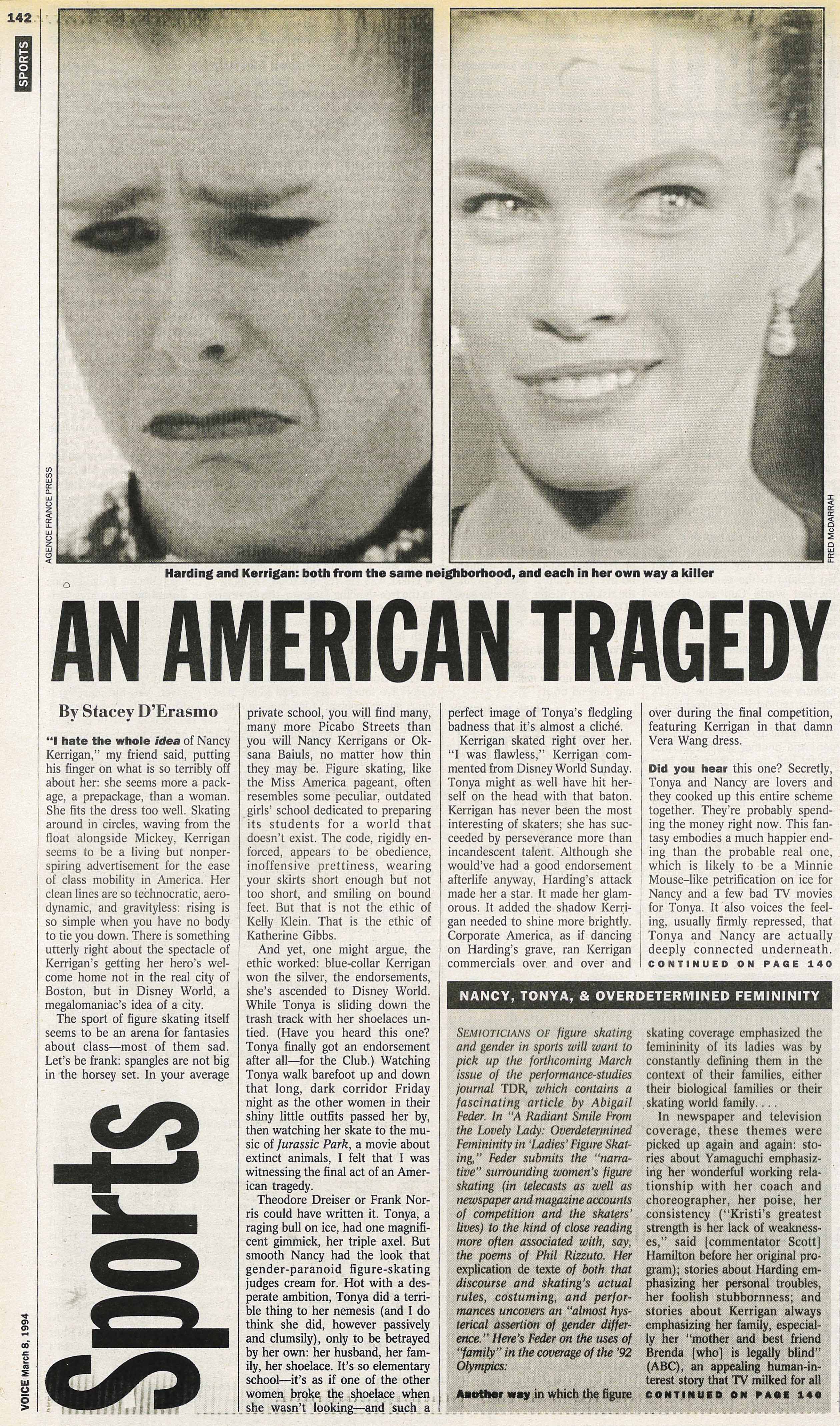