If you were born any time after, say, 1965, when “(I Can’t Get No) Satisfaction” hit the airwaves, you’ve been listening to Keith Richards all your life. In our age of fractured media and micro–attention spans, it’s hard to remember those days when one song was blaring from every car radio, jukebox, or plastic portable on the beach — so pervasive that even if you were in your mother’s womb you were getting hit with those top-of-the-charts vibrations. “The Summer Man,” an episode of Mad Men, captured the ubiquity of “Satisfaction” during the dog days of ’65 when slick adman Don Draper, questing after a healthier lifestyle, hears it on a transistor radio as he sits in a locker room. The song hits full volume as he lights a cigarette outside the New York Athletic Club, his gestures and attire in sync with the tune’s rollicking ennui: 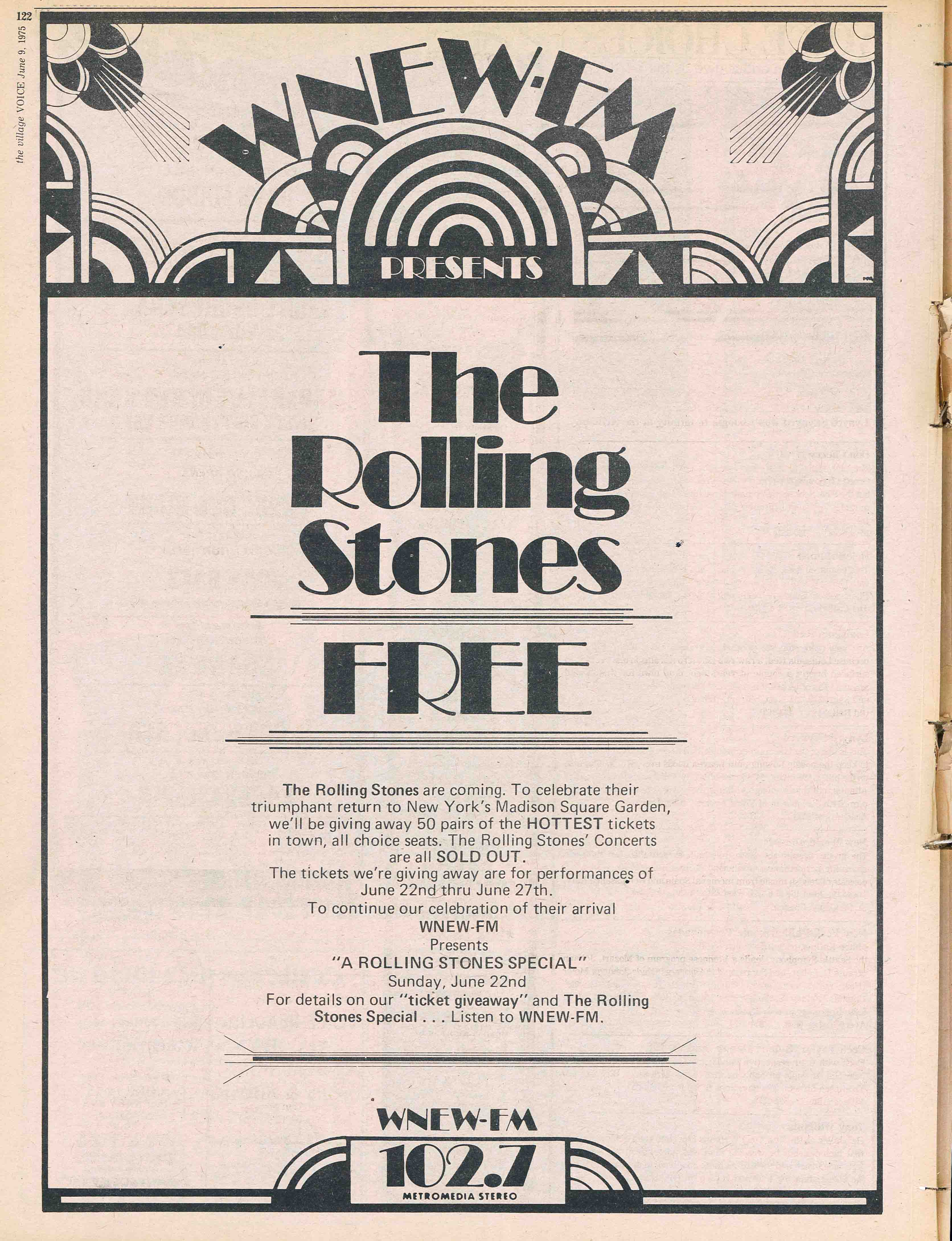 To celebrate Richards’s 75th birthday today, we’ll relate his oft-told tale of how that monster hit came about. Richards was 22 years old when he fell asleep one night with a tape recorder by his bed and awoke the next morning to see that the tape had been run to the end. Then, as he related to an interviewer many years later, “I put it back on, and there’s this, maybe, 30 seconds of ‘Satisfaction,’ in a very drowsy sort of rendition. And then it suddenly — the guitar goes ‘CLANG,’ and then there’s, like, 45 minutes of snoring.”

In the studio Richards employed a newfangled fuzz box as a stand-in for the horn section he planned to add later, but the band ultimately decided to leave the distorted guitar licks in the grooves, and a fuck-all anthem for the ages was born. In fact, according to the performing rights organization BMI, “Satisfaction” is the 91st most performed song of the twentieth century. That gaudy stat can be added to the Stones seven other No. 1 hits, and 66.5 million (and counting) concert tickets sold.

Writing one of the most popular songs of all time — in his sleep — seems S.O.P. for Richards, whose lifetime of consuming copious quantities of hard liquor and even harder drugs has left observers long wondering when Keef’s wiry little body would give up the ghost to join his Rolling Stone bandmate Brian Jones, and such other exemplars of the form as Jimi Hendrix, Janis Joplin, Jim Morrison, and Amy Winehouse, in Hell’s hottest rock band. But despite preacher Billy Graham’s warning that rock ’n’ roll was “ever working in the world for evil,” the devil’s music has been good to Richards. As he relates in the opening of the audio version of his 2010 autobiography, Life, he’s outlasted the doomsayers. “For many years, I slept, on average, twice a week, and this means that I’ve been conscious for at least three lifetimes.” He then adds, “I used up my nine lives long ago, but here I am, I’m still playing, and I’m still rockin’ and still rollin’.” Indeed, the Stones will be rolling into America next spring for their No Filter Tour.

To celebrate, we are resurfacing an up-close-and-personal feature story from Voice staffer Karen Durbin, from 1975, when the Stones were barnstorming America with a giant inflatable penis. 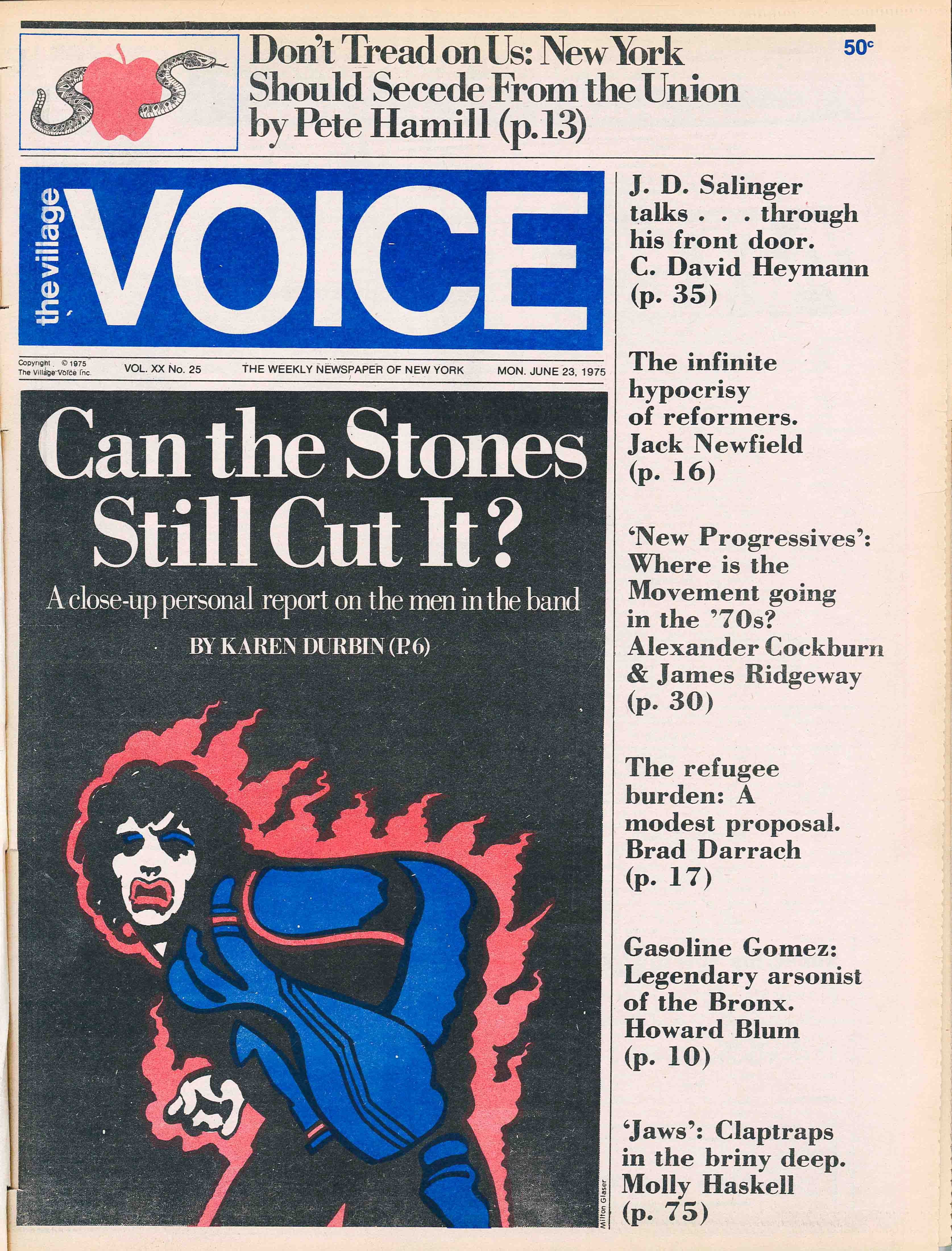 As in many articles about the Stones, you’ll get a healthy dose of Mick’s musings, but Durbin’s descriptions of Richards leave no doubt as to who is the brains and who is the soul of the band.

As for Keith blasting into rooms, well, he does. Offstage, Keith has the same intensity of presence as he does on, and so, of course, it stands out more. He’s amazing looking — all tatterdemalion satin jackets and flapping silk scarves, tight jeans, hollow cheeks, black artichoke hair, and huge iridescent eyes. He doesn’t look decadent; he looks vigorous and infernal, as if he just strode forth from the jaws of hell. 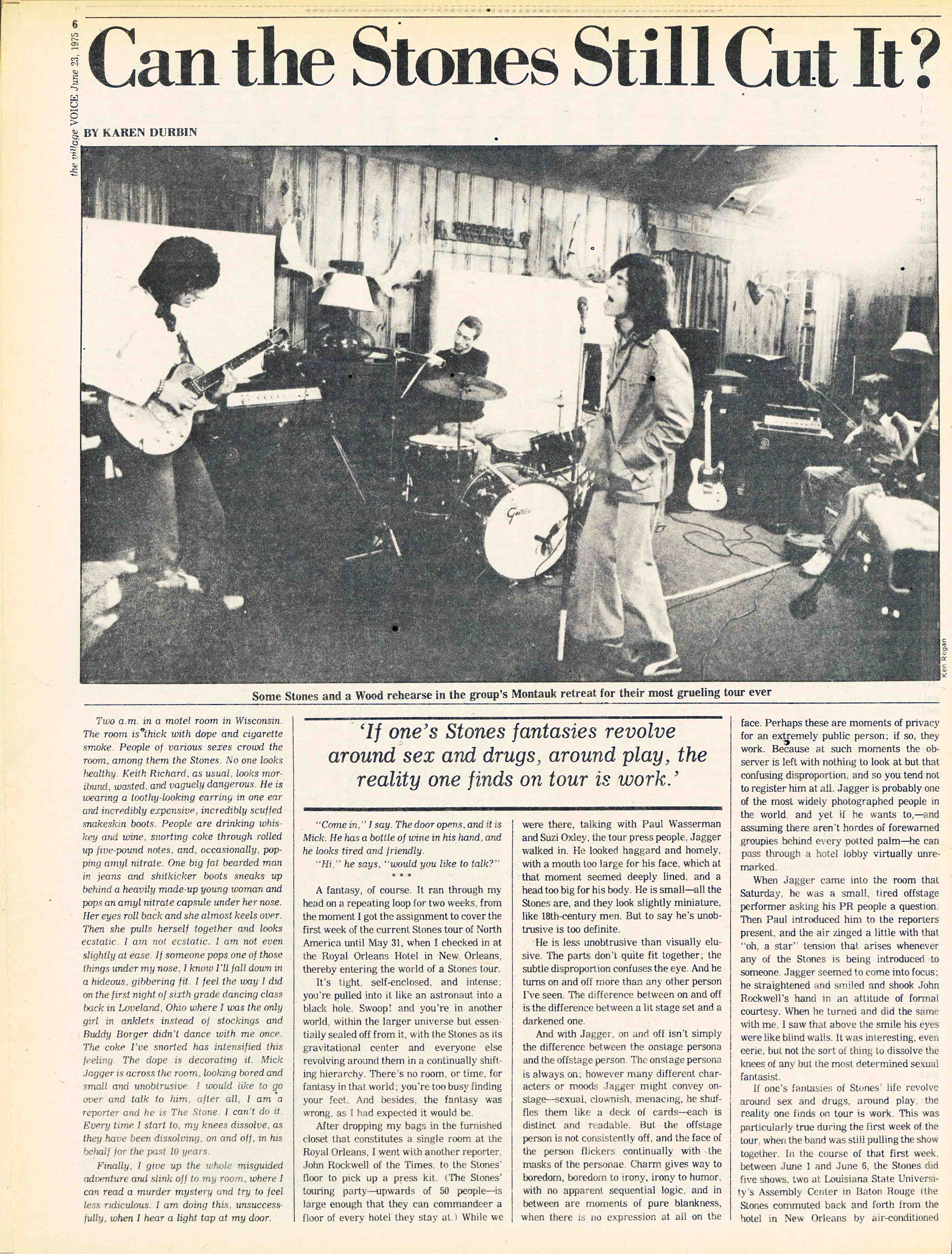 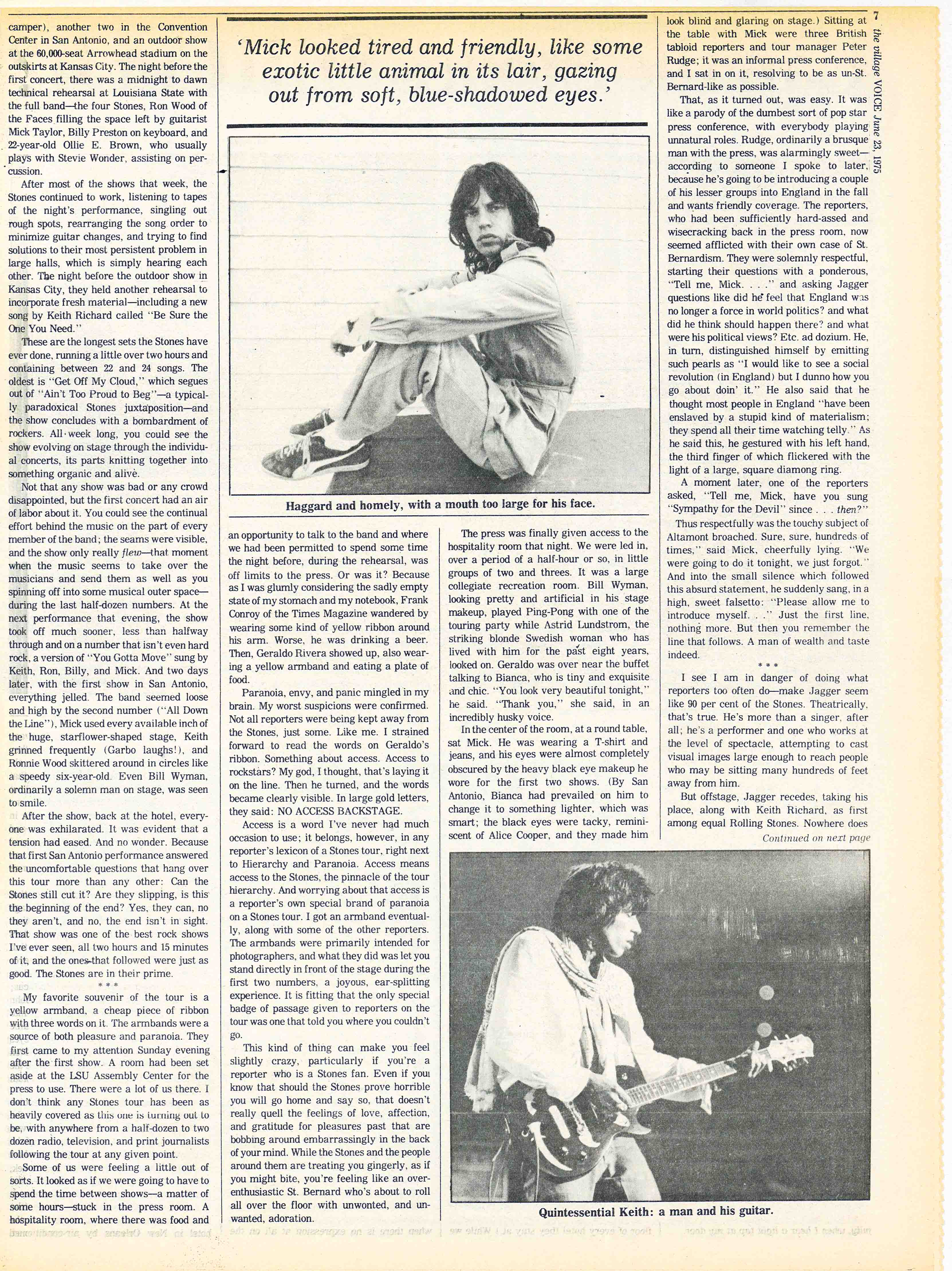 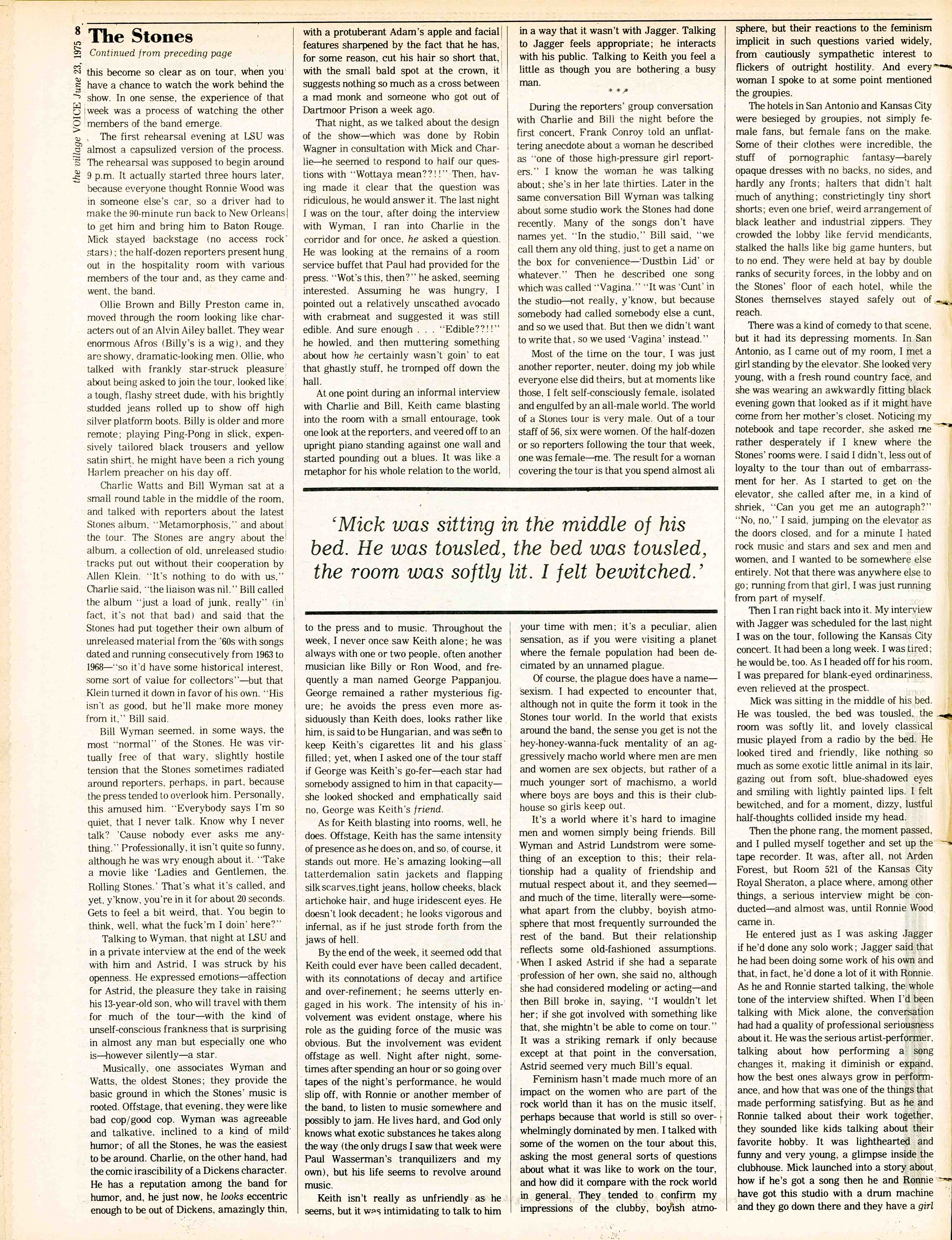 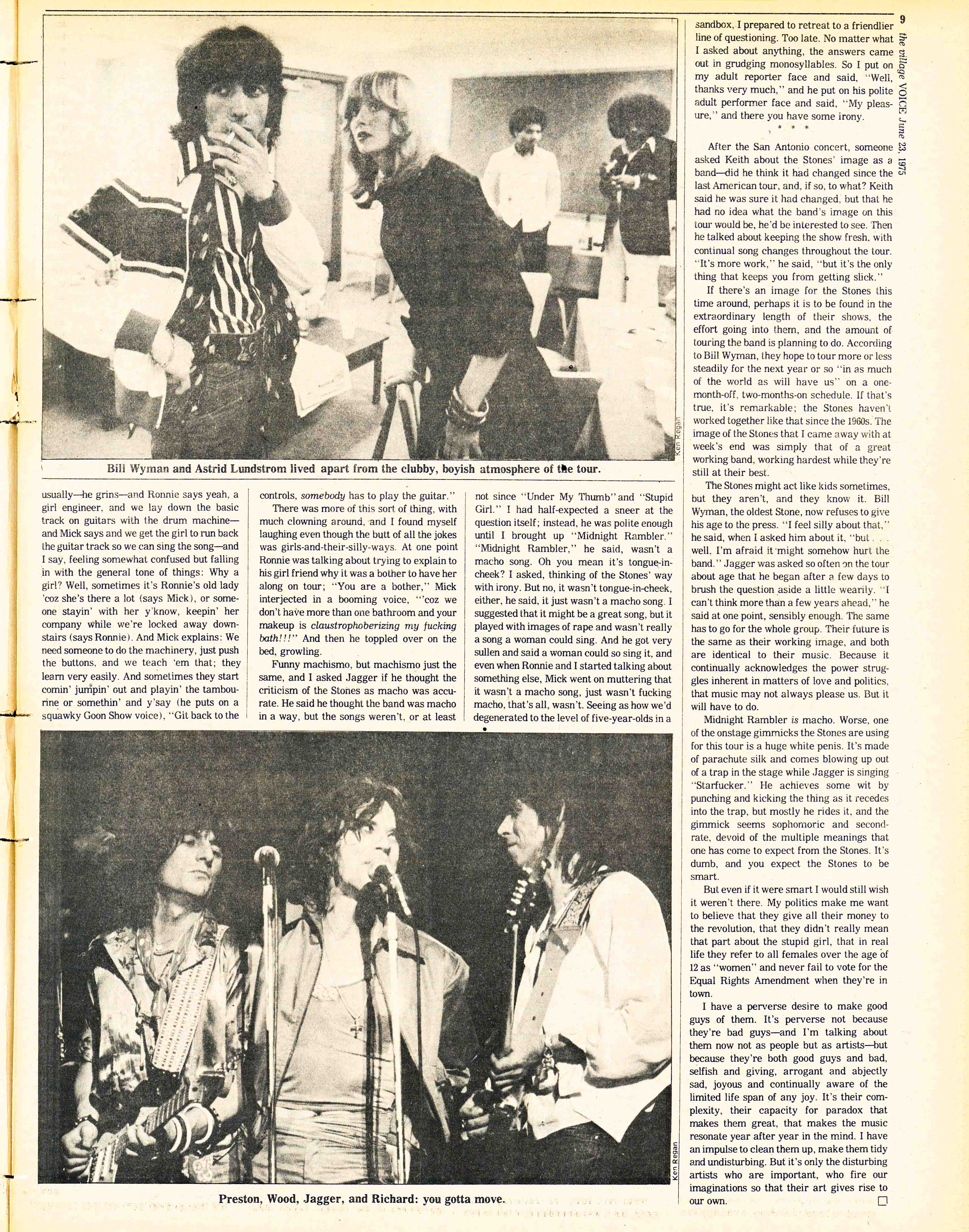 And yes, it’s Keith’s birthday, but Jagger celebrated his 75th this past July — and when you’ve got a great Milton Glaser portrait on your front page, you gotta blow it up big. Happy Birthday to the Glimmer Twins. 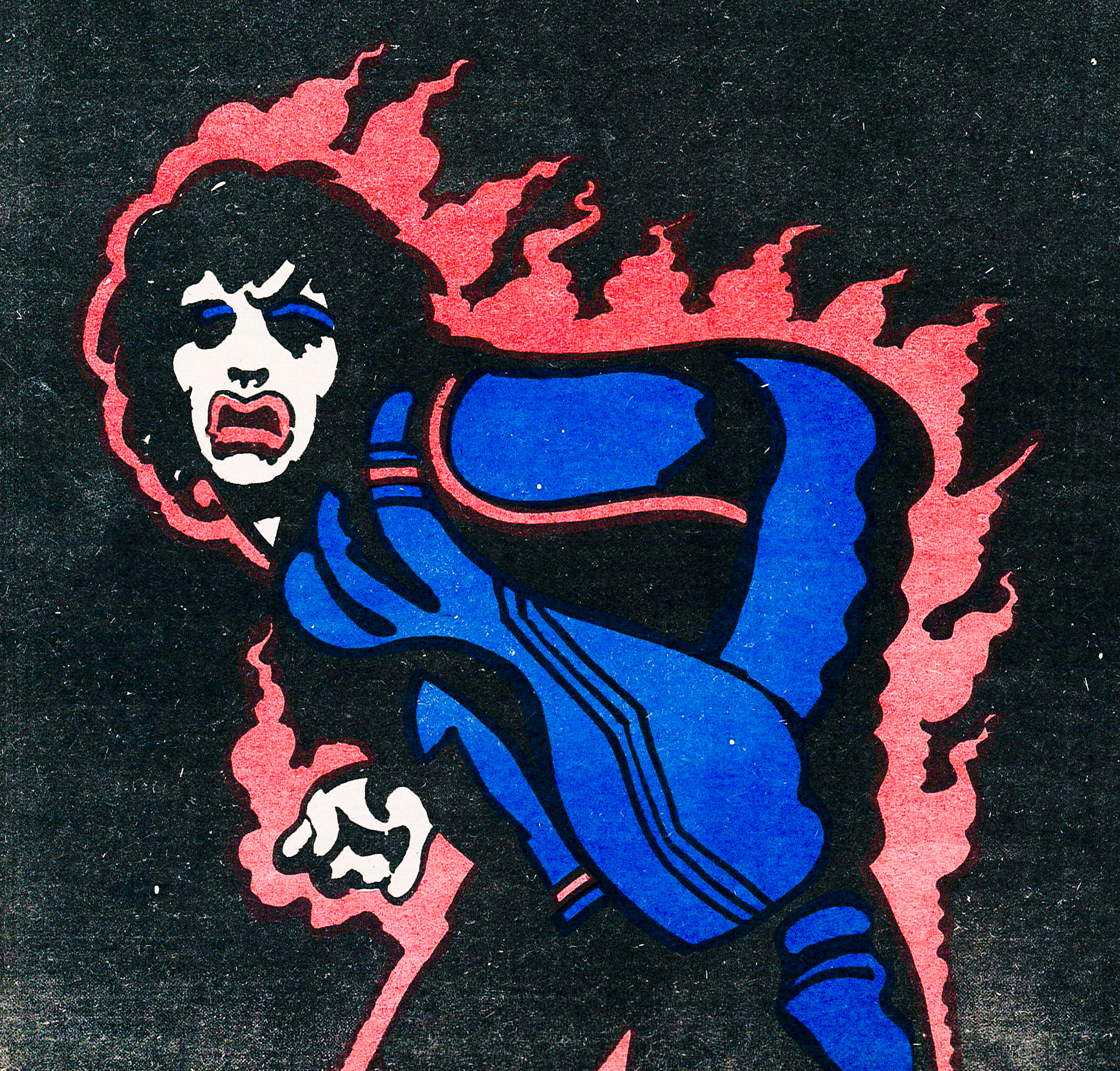