In the July 5, 1973, issue of the Village Voice, readers got a twofer. First, the paper’s Washington editor, Bob Kuttner, tackled the impending constitutional crisis. “If Congress fails to impeach Nixon — not for his putative ‘knowledge’ of the burglary and the cover-up but for presiding over an administration that willfully tried to undo the liberties of a free people — it will be a sign that Caesarism is tolerated, and the rule of law will continue to erode.” Kuttner’s article also illustrates, for today’s audience, an important difference between the Senate committee investigating the Watergate scandal, led by North Carolina Democrat Sam Ervin, and Robert Mueller’s current special counsel probe into Russian meddling in the 2016 presidential election: leaks to the press. Mueller’s investigators are notable for being tight-lipped. And as Kuttner wrote, “When the Ervin Committee is not in session, the news leaks reach torrential proportions.”

Like Trump today, President Richard Nixon hated the news media. But Twitter wasn’t available then for assailing the press as the “enemy of the people”—Nixon had his staff secretly draft an “enemies list” consisting of media figures he planned to harass and punish through such tactics as arbitrary audits of their tax returns. Nixon’s first two commissioners of Internal Revenue offered up their resignations rather than take such improper action, and the idea was shelved. Nixon then, without court approval, ordered the F.B.I. to wiretap members of the press and government, searching out “leakers.” Additionally, he suborned perjury to cover up favors to corporate supporters.

When the administration’s Dealing With our Political Enemies document came to light, many reporters who had investigated Nixon’s underhanded dealings were disappointed not to be on it. Kuttner writes, “An awful lot of good people in Washington failed to make Nixon’s laundry list, and some are downright indignant. The Washington Post had only two names on the list, perhaps in a reverse snub. Even [longtime anti-Nixon political cartoonist] Herblock was inexplicably omitted. The Village Voice was cut dead.” 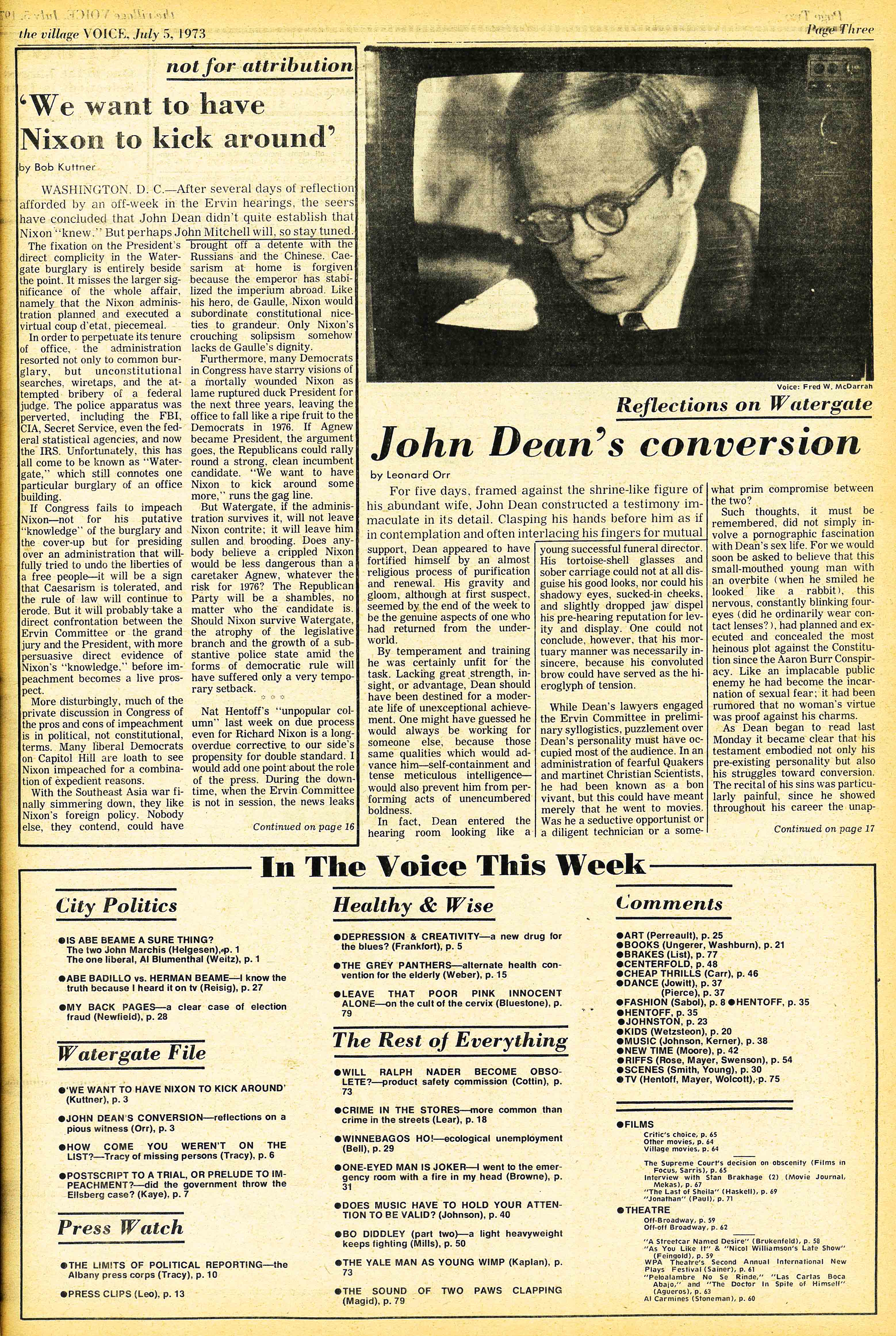 In a second article on that page, freelancer Leonard Orr discussed John Dean’s Senate testimony before the Watergate committee. Dean, the former White House counsel, had been fired by Nixon a couple of months before his appearance. Earlier in his legal career, Dean had been terminated by a law firm for “unethical conduct” — while working to obtain a television broadcast license for a client, Dean had attempted to procure one of the valuable permits for his family. Such blurring of legal and ethical lines would seem to have made him the perfect fit for a boss who had based much of his decades-long political career on bullying, prevaricating, and outright lying.

But as the Watergate scandal engulfed Nixon’s White House, Dean decided — in a calculation perhaps similar to the one Michael Cohen has recently made about his former boss Donald Trump — that he was not going to take the fall for his superiors’ crimes and misdemeanors. In both cases, the former consigliere turned state’s evidence. Until the Watergate hearings brought him into the nation’s living rooms, Dean, who had risen from volunteer lawyer on Nixon’s 1968 campaign to White House counsel two years later, was simply a faceless fixer doing his president’s bidding. Dean even wrote the cover memo for the enemies list, which stated, in part, “This memorandum addresses the matter of how we can maximize the fact of our incumbency in dealing with persons known to be active in their opposition to our Administration. Stated a bit more bluntly — how we can use the available federal machinery to screw our political enemies.” While not quite the same as Cohen’s testimony that he paid off a porn actress and a Playboy model to keep them quiet about their alleged affairs with Trump, both instances reveal henchmen willing to bend — and break — the law in their bosses’ service.

There are other similarities between Dean in 1973 and Cohen today. Trump’s former confidant has recently undergone a transformation, from the man who said, “I’m the guy who protects the president and the family. I’m the guy who would take a bullet for the president,” to stating that Trump is no longer his top priority: “To be crystal clear, my wife, my daughter and my son, and this country have my first loyalty.” Dean was also concerned about his family. Orr’s Voice article touched on a conspiracy theory rising like swamp gas around the Watergate debacle: that the counselor’s pretty wife, Maureen, had once been part of a call-girl ring, and that the whole Watergate scandal was based on Dean’s desire to protect her reputation. The smog of history has never cleared enough to give credence or the lie to this potboiler tale; at this point, the Deans’ marriage has endured for more than 45 years.

Ultimately, though, these sagas from then and now share the theme of the loyal subordinate wronged. When it appeared that Dean was being groomed to be Nixon’s fall guy, the ambitious young lawyer decided there was no honor among the thieves in the White House. Orr wrote, “Dean appeared to have fortified himself by an almost religious process of purification and renewal,” and added that the counselor “entered the hearing room looking like a young successful funeral director.”

Such firsthand observations from Orr give insight into why Dean has remained on the national stage for more than four decades and is once again on TV, commenting on current Washington scandals. Asked recently about Trump’s attempts to use the Department of Justice to punish his personal enemies, Dean told CNN, “While I heard [Nixon] break the law on some of those [Watergate] tapes, I never heard him do it by turning on his enemies and trying to put them in jail. This is really very, very heavy sledding.” Having had up close and personal experience of a president who challenged the rule of law, Dean was even more blunt in another response: “This is the sort of stuff of a banana republic. This is what an autocrat does.”

Forty-five years ago, Dean’s television testimony riveted America. Today, with our 24-7 mediascape and a president who can’t stop twiddling his Twitter thumbs, the Watergate hearings seem rather quaint. Earlier this summer, Trump excoriated Cohen’s change of heart during a Fox & Friends interview: “This whole thing about flipping — they call it. I know all about flipping. For thirty, forty years I have been watching flippers. Everything is wonderful, and then they get ten years in jail and they flip on whoever the next highest one is, or as high as you can go. It almost ought to be outlawed.”

Since he partially made his bones as a bullying exec on reality TV, perhaps it’s no wonder that Trump sounds like the captain of a New Jersey crew from The Sopranos. Still, he might do well to remember that it is sometimes the little guys who come out on top. In fact, when Trump thinks of Cohen these days, perhaps he’ll recall a popular TV show that aired from 1964 through 1967, a period when Nixon was rebuilding his career with an eye toward taking one last shot at the presidency after narrowly losing to John F. Kennedy, in 1960. The lyrics to the show’s theme song begin, “They call him Flipper — Flipper — faster than light-ning/No one you see — is smarter than he…” 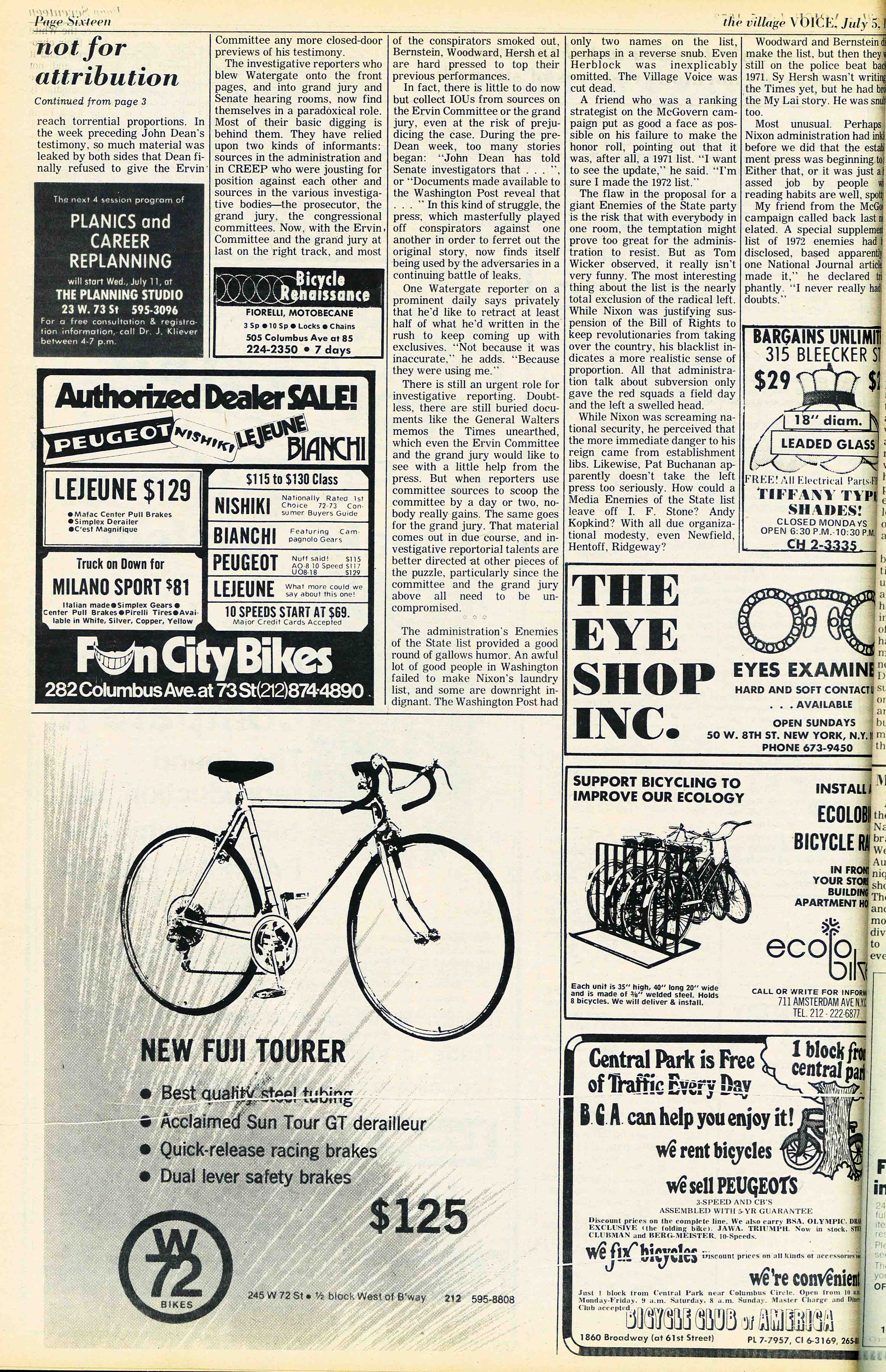 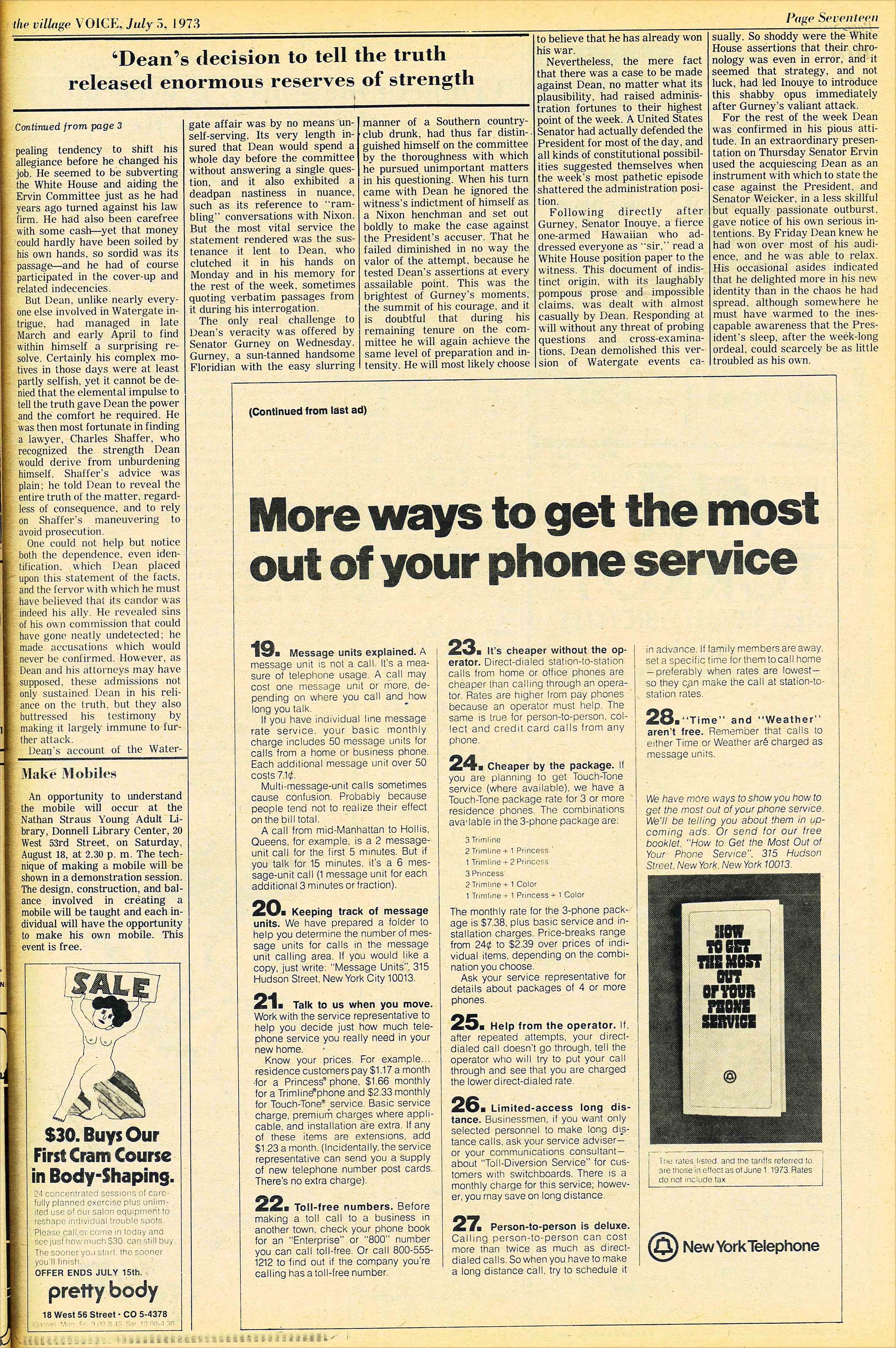