Andy Land 7: A Museum of One’s Own

In May 1994, the opening of the Andy Warhol Museum in Pittsburgh was the art event of the year, drawing the bold-faced glitterati from both New York’s high society and downtown demimonde to the artist’s hometown in the hills of western Pennsylvania. The Voice devoted two stories to the occasion, with Elizabeth Hess raving about the museum itself, and Guy Trebay taking stock of the festivities, which saw Debi Mazar, Dennis Hopper, Pee-wee Herman, John Waters, and Fran Lebowitz in attendance. “Among the painters on hand for Friday’s black-tie dinner,” wrote Trebay, “were Roy Lichtenstein, Francesco Clemente, Brice Marden, and Ross Bleckner, who dressed down in blue jeans and jacket and spent the evening jockeying to get cute boys moved to his table.”

As for the space itself, both writers were fans. “The Andy Warhol Museum is exquisite, beyond expectations,” wrote Hess. “Designed by New York architect Richard Gluckman, it’s a vast industrial warehouse that has been turned into a $12.3 million art palace. Inside, there are six expansive floors of open, elegant exhibition space; a film theater; an archive floor; an addition for offices; and storage space for the thousands of Warhols in the museum’s collection.… The place is perfect.”

Both Hess and Trebay explored the connection between artist and city. “Over the course of the weekend, visitors would have a chance to take the Warhol World Tour,” wrote Trebay, before offering a thumbnail sketch of young Andy Warhol’s world. Fans could visit “the house-next-to-the-house on 73 Orr Street where Andy and his two brothers were born (asphalt shingles, two floors, single water closet in the basement, wretched poverty that probably looked good to Andrei and Julia Warhola at the time), the neighborhood where he was reared (set in a dreary valley know as the “the Rut”), the church where his family worshiped (St. John Chrysostom, Byzantine rite Catholic), the high school where he was a star art student (Schenley High) and the department store (Joseph Horne Co.) where, as a window dresser, he launched himself into the world. What they wouldn’t get is any clear sense of how a talented Ruthenian-American kid with jug ears and a bulbous nose charted a trajectory that would carry him out of his class, out of Pittsburgh (he always claimed it was McKeesport), away from the ghetto of sexual stereotype (let’s do him the favor of remembering he was gay) and onto the face of pop (not Pop) culture, which was always Andy’s natural milieu.”

As this week’s opening of “Andy Warhol — From A to B and Back Again” at the Whitney makes clear, few contemporary American artists can compete with Warhol’s cultural legacy. But that was no less true in 1994, when Hess observed: “Warhol not only looks original, but surprisingly contemporary, like the most influential artist of the last few decades. He looks like he deserves his own museum. The impact of Warhol’s work on American culture was hard and fast, but this museum is going to slowly carry this work into the future, for posterity. The gatekeepers, in the end, have no choice.” 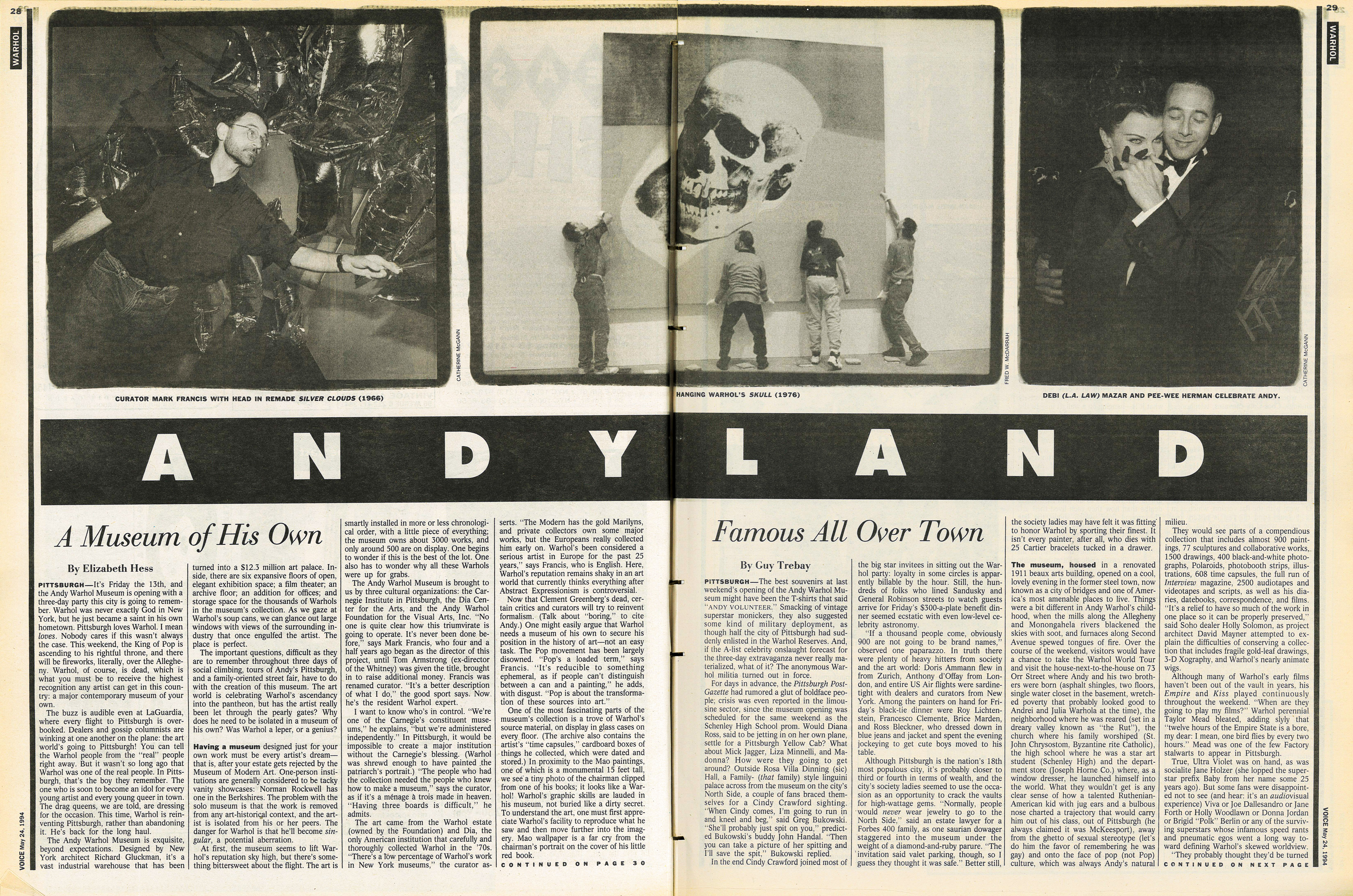 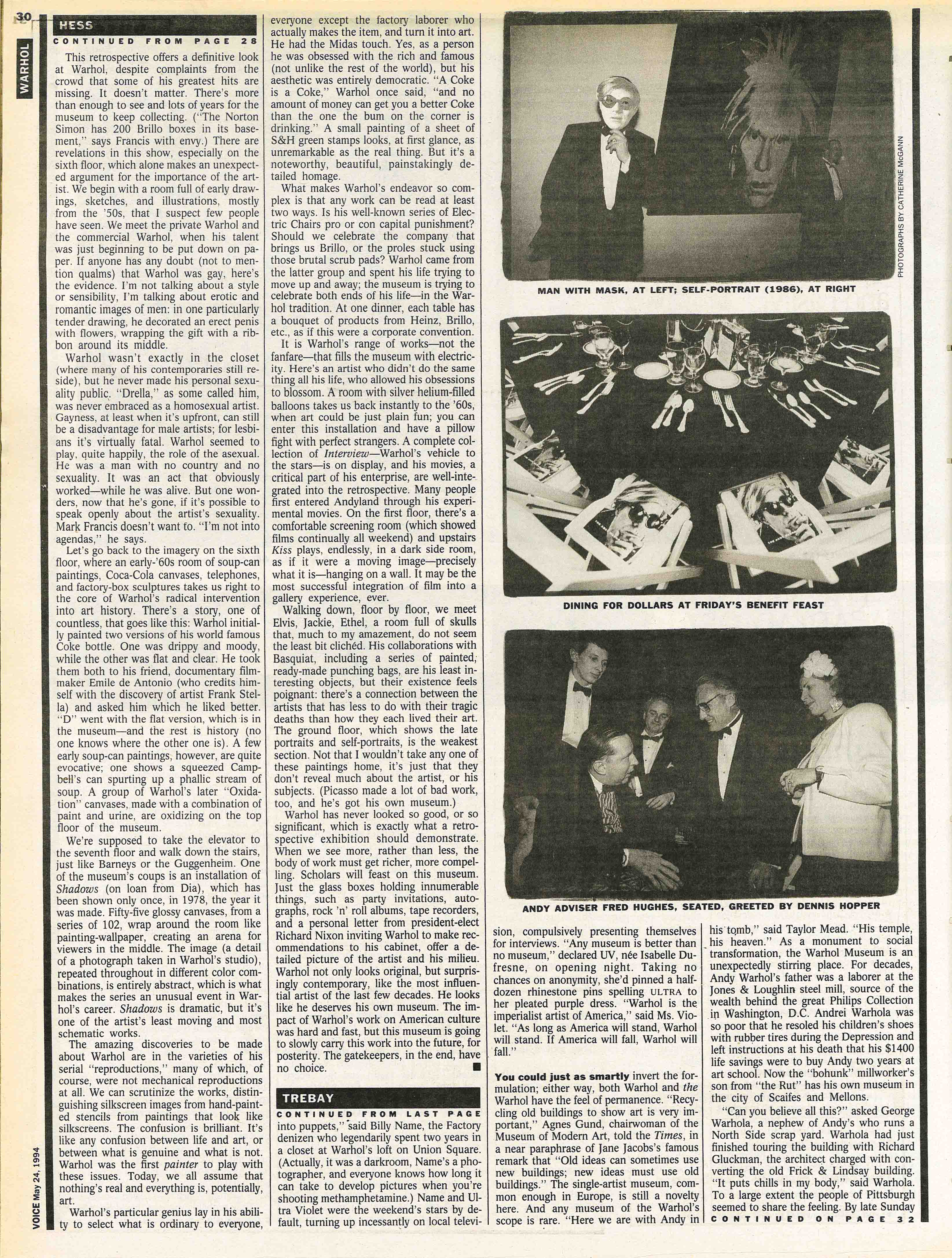 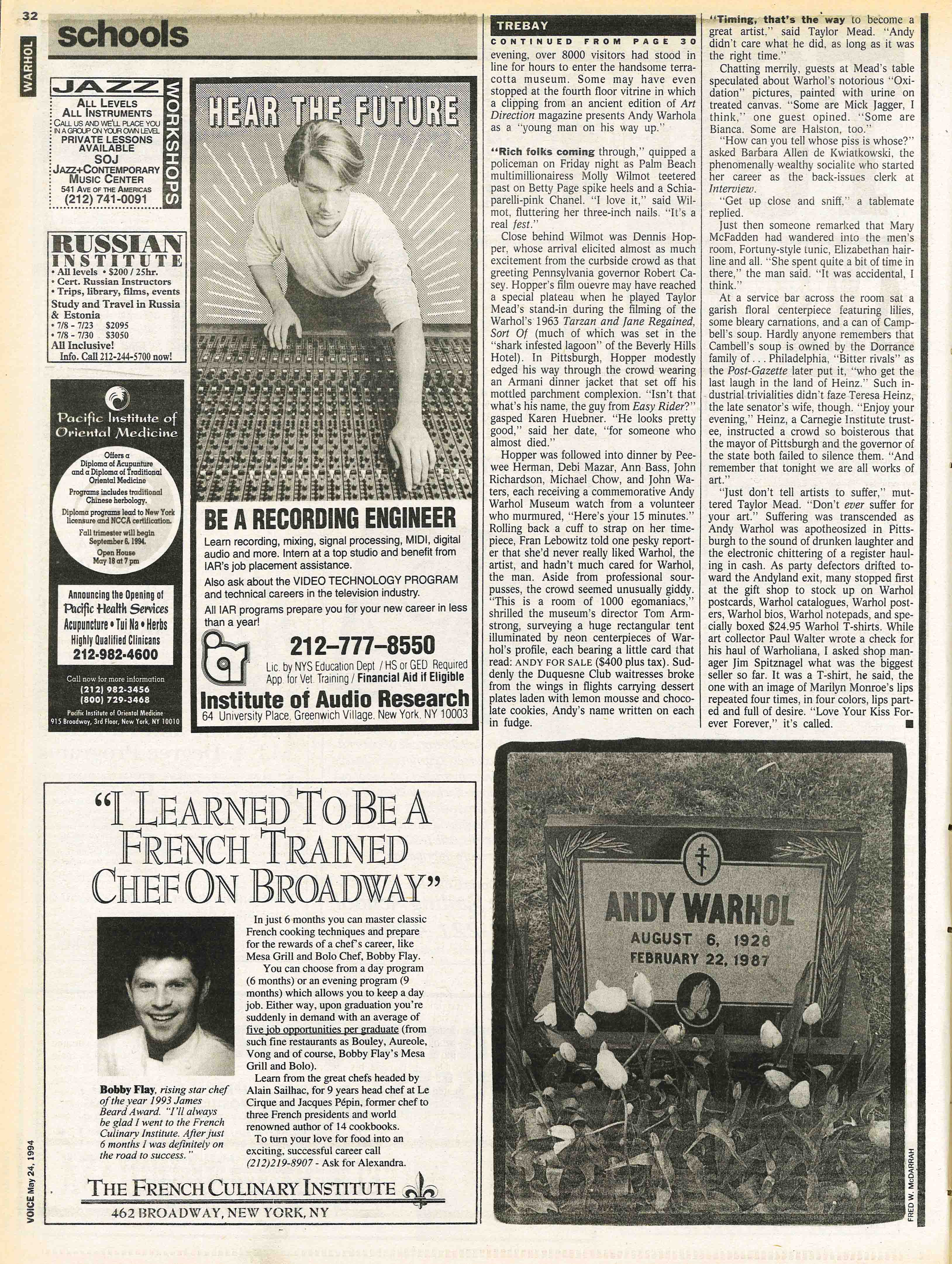