For Andy Warhol, a night on the town was hardly a news-making event, especially in the Sixties. But in September 1968, when Voice writer Leticia Kent caught up with the pop-art icon, it was front-page news. As Kent wrote in the September 12 issue of the paper: “It was the underground film-maker’s first public appearance since last June, when, as everyone knows, he was shot down by Valerie Solanas.”

The shooting, on an otherwise typical day in early June, had rocked the downtown demimonde, and it nearly took Warhol’s life. “I don’t even know whether or not I’m really alive or — whether I died,” Warhol told Kent. “It’s sad. Like I can’t say hello or goodbye to people. Life is like a dream. What would you call that?”

Warhol had come a long way since his brush with death. Just three days after the shooting, in the June 6 issue of the Voice, writer Howard Smith provided a blow-by-blow account of an “ordinary afternoon” that suddenly turned to panic and pandemonium. Smith also looked at the strange path that led Solanas (spelled “Solanis” in the story) to commit such a violent crime. As the Voice went to press, it was still unclear whether her assassination attempt had succeeded. “Tuesday his condition was still listed as critical,” wrote Smith, “and doctors gave him a 50-50 chance to live.”

In his 1980 memoir, POPism: The Warhol Sixties, the artist describes the experience from his perspective. “As I was coming down from my operation, I heard a television going somewhere and the words ‘Kennedy’ and ‘assassin’ and ‘shot’ over and over again. Robert Kennedy had been shot, but what was so weird was that I had no understanding that this was a second Kennedy assassination — I just thought that maybe after you die, they rerun things for you, like President Kennedy’s assassination.”

Just after midnight on June 5, 1968, RFK had been gunned down in Los Angeles, too late to make it into that week’s issue of the Voice. The following issue featured Fred McDarrah’s haunting portrait of the late New York senator. The two shootings, separated by two days and thousands of miles, rattled New York City, highlighting the growing threat of gun violence. In POPism, Warhol recounts an exchange between Robert Rauschenberg and Factory regular Brigid Berlin at Max’s Kansas City:

She went on toward the back room and collided with Bob Rauschenberg who was coming down from the upstairs, all sweaty from dancing. “I told him the news about Bobby Kennedy,” she said, “and he fell to the floor, sobbing, and said, ‘Is this the medium?’ ”

“What was that supposed to mean?” I asked her.

“First you, then Bobby Kennedy,” she said. “Guns.”

This week’s opening of “Andy Warhol — From A to B and Back Again” at the Whitney Museum of American Art provides a good excuse to revisit one crazy, tragic summer from the pages of the Voice.

“The Shot That Shattered the Velvet Underground”
by Howard Smith
June 6, 1968

It was an ordinary afternoon at The Factory, the huge, new loft on the north side of Union Square which is the center of the Warhol scene. Sun came in the windows and gleamed off the mirror-topped desks. Paul Morrissey, Warhol’s executive producer, and Fred Hughes, an assistant, sat around talking with Mario Amaya, a visiting art magazine editor from London.

Suddenly the elevator doors opened and Andy Warhol walked into the loft with Valerie Solanis [sic], a sometime writer and super-woman-power advocate who had appeared in his film, “I, a Man.” She had come by The Factory earlier in the afternoon looking for Warhol, and had waited for him outside in front of the building for three hours. They walked over to talk with Morrissey, Hughes, and Amaya. It was typical Factory small talk, Hughes recalled. “You still writing dirty books, Valerie?” he asked.

Hughes wandered off, and Morrissey took off to the bathroom. Then the telephone rang, and Warhol went to answer it. While he spoke with Viva, the reigning superstar, Valerie Solanis [sic] pulled a .32 automatic out of the pocket of her trench coat. Warhol turned and saw the gun. “Valerie,” he yelled. “Don’t do it! No! No!” She fired three shots, and Warhol fell to the floor.

Then she turned on Amaya, and shot him in the hip. Amaya fled to a back room in the loft and crashed through a door, breaking the latch with the impact. She pursued him, and tried to force the door open while Amaya held it closed with his body. Morrissey, meanwhile, had heard the shots and ran to watch her through the small projection window.

She then turned and walked back to Hughes who, terrified, begged her not to shoot. “I have to shoot you,” she told him. Hughes fell to his knees, pleading “You can’t. I’m innocent.” Just as she seemed about to shoot, the elevator doors opened again and distracted her. “She was very confused, very agitated,” Hughes recalled. She turned back, pointing the gun at Hughes, who was still on his knees, pleading for his life, and then Valerie Solanis [sic] darted on the empty elevator and disappeared.

Hughes called the police and an ambulance. Warhol lay on the floor, he said, still conscious and bleeding only slightly, but obviously in great pain. He seemed delirious, and cried “I can’t! I can’t!” Then photographer Billy Name came into the loft, saw Warhol, and went to him. Warhol heard him cry, but mistook it for laughter. “Billy,” he said softly, “don’t laugh. Don’t make me laugh.”

The police arrived, and finally the ambulance, and Warhol was taken to Columbus Hospital. “They thought he was dead at first,” Morrissey said. But Warhol was alive, and was rushed to surgery, where a four-man team of doctors fought for five and a half hours to save him. Tuesday his condition was still listed as critical, and doctors gave him a 50-50 chance to live.

While the doctors operated, friends, press, and superstars jammed the tiny lobby of the hospital. The press was voracious; the superstars responsive. In one corner Leo Castelli and Ivan Karp were being interviewed; in another, Viva and Gerard Malanga were being set up for photographs. Later, Warhol’s mother, a tiny old woman wearing a babushka, was brought weeping out of a back room. Malanga and Viva went to comfort her, and a hospital attendant brought a wheelchair to take Mrs. Warhol, who has a heart ailment, outside to a waiting taxi. A flock of photographers struggled for front photographs, almost trampling the old woman in the process.

Then word arrived that Valerie Solanis [sic] had turned herself in to a rookie cop at Times Square, and some of the press rushed to the 13th Precinct station, only a few blocks away, where she was to be booked. While she was being questioned upstairs, a battery of photographers stood poised for an hour in front of the door through which she would enter. Twenty other newsmen milled about the room. When she finally came through the door, her hands were cuffed behind her back, it was bedlam. Photographers climbed behind the booking desk, elbowing cops out of the way. While police tried to book her, she posed and smiled for photographers. It was impossible to book her; the clicking and whirring of the cameras drowned out the sound of her voice. The police gave in, and let the press interview her. She was responsive to the questions. When asked about a motive, she said “I have a lot of very involved reasons. Read my manifesto and it will tell you what I am.” After a few minutes, the police hustled the reporters out of the station and took her back to be booked in the fingerprint room. She was charged with felonious assault and possession of a deadly weapon.

Valerie Solanis’s [sic] life revolved around her “manifesto,” a 21-page mimeographed document entitled S.C.U.M., Society for Cutting Up Men. She was a man-hater, not a lesbian, but consumed with a passionate loathing of men. All the passion was contained in the manifesto, which she sold to support herself by placing ads in The Voice and peddling it — at $1 for men and 25 cents for women — at coffeehouses and Max’s Kansas City. “She was always known to be odd,” said an acquaintance, “even within a pretty odd scene. But she was very friendly, very warm. All her hate was in her writing. In person she was gentle, not aggressive at all.”

Yet suddenly she turned savage, and people at The Factory searched for a motive. She was bitter, they said, because Warhol had refused for over a year to use a script that she had written. She also had at one time accused Warhol — absurdly, his associates said — of dubbing in over her voice in the film, “I, a Man.” Neither clue seems sufficient to explain the horror that shattered the Velvet Underground. 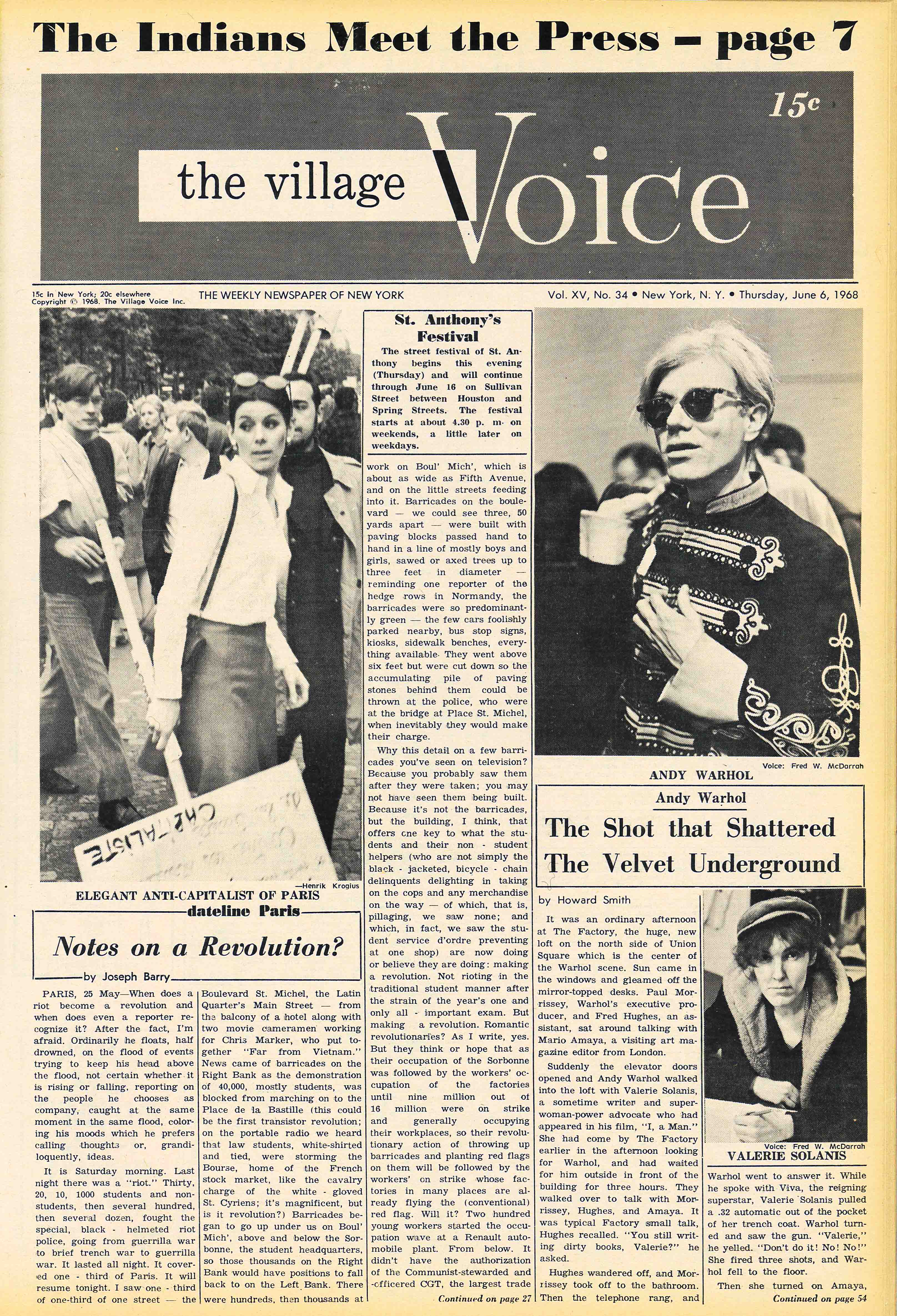 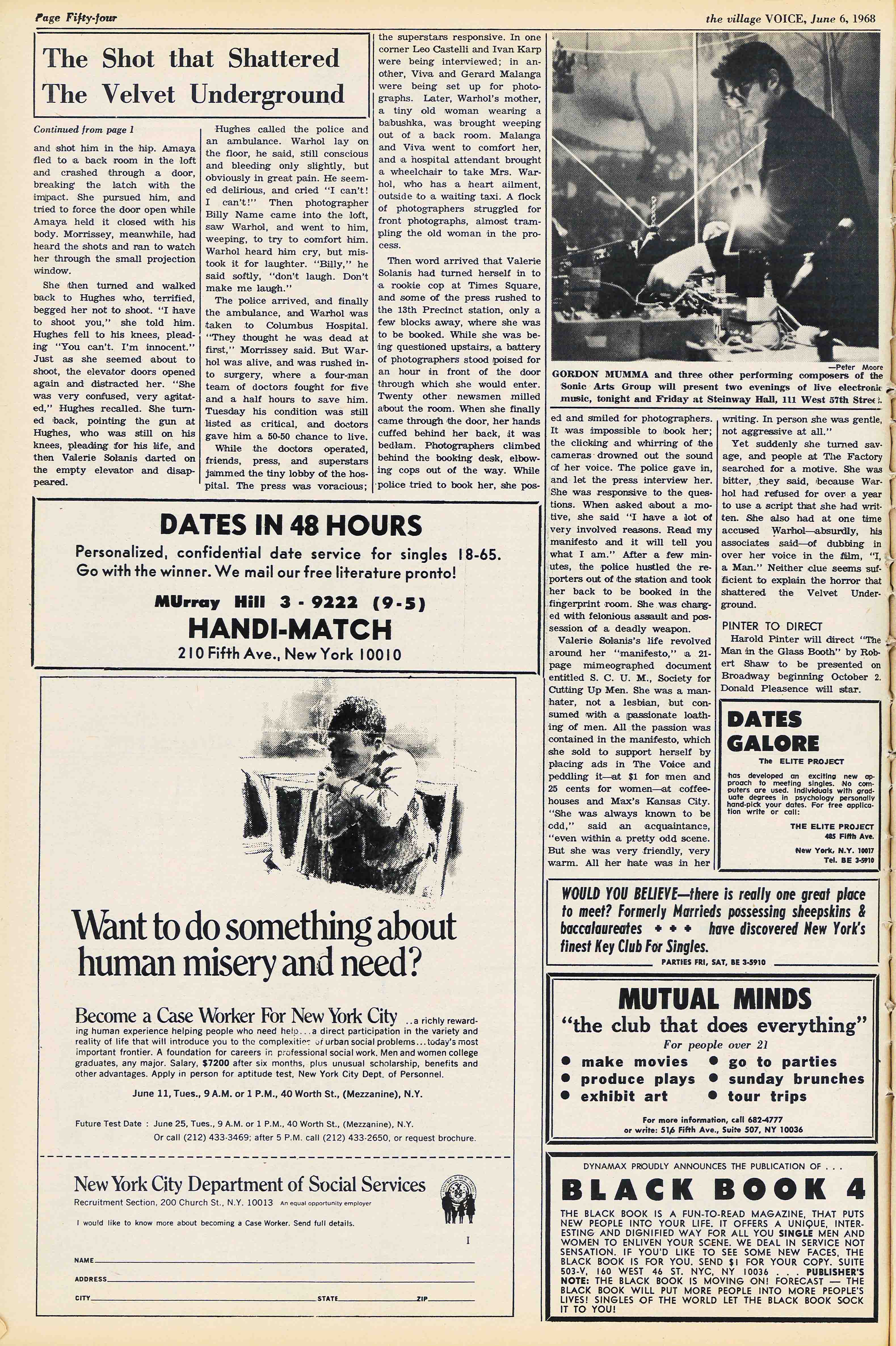