[We have to cop to a bit of Yankees bias here at Archives Central, and so admit that the Fall Classic starting tonight is a case of poxes on both houses. That said, we find ourselves hating the Dodgers a shade less than the Sox and have taken a look into the green volumes of bound newsprint to see how Voice writers of yore approached the bicoastal Boys of Summer. We found a few gems, including a piece from the “only Dodger fan in Yonkers” and another about a novel seeking to redress the perfidy of the Brooklyn team’s move to Los Angeles in 1957.

But let’s start with a great year for the Yanks — because why not? It’s the October 30, 1978, issue of the Voice, and writer Clayton Riley zooms in on L.A. Dodgers captain Davey Lopes stepping up to the plate: “Maybe this exceptional sorrow is always in his eyes. Tonight, however, he’s made it clear he wants to live higher and stronger for the friend and mentor he affectionately called the Devil… Jim Gilliam, who replaced immortal Jackie Robinson at second base in old Ebbets Field.”

Much baseball history crosses in those two sentences. Gilliam had replaced Robinson at second base in 1953, when the All-Star veteran moved to playing third and the outfield. Robinson had famously broken through baseball’s color line in 1947, when the Dodgers were still Brooklyn’s beloved bums. Gilliam, also black, was a teammate who, unlike Robinson, made the move from Flatbush to the City of Angels, leaving behind a trail of broken Brooklyn hearts. After his playing days, Gilliam was the Los Angeles Dodgers first-base coach, and he had passed away two days before the 1978 Series opened. Riley’s chronicle of that championship battle reminds the few who might have forgotten just how stellar Yankee third basemen Graig Nettles’s was during the Series: “Nettles clearly established that he had taken away a vital portion of the field for the right-handed pull hitter, which was to say most of the Los Angeles team.” In Yankee centerfielder Mickey Rivers, Riley found “a man who certifies the premise: There are answers in the universe we simply shouldn’t question.”

This was the second straight Series between the Dodgers and Yanks, and L.A., anxious to avenge their ’77 loss, went up 2-0. But the Yanks took three in the Bronx and finished the deal back at Chavez Ravine. Riley writes, “Pitcher Don Sutton of the Dodgers, who would lose the final, devastating ballgame at Los Angeles, brought a measure of reflection to the work when he told a reporter that he felt no exceptional pressure on him as he went out to face the Yankees. 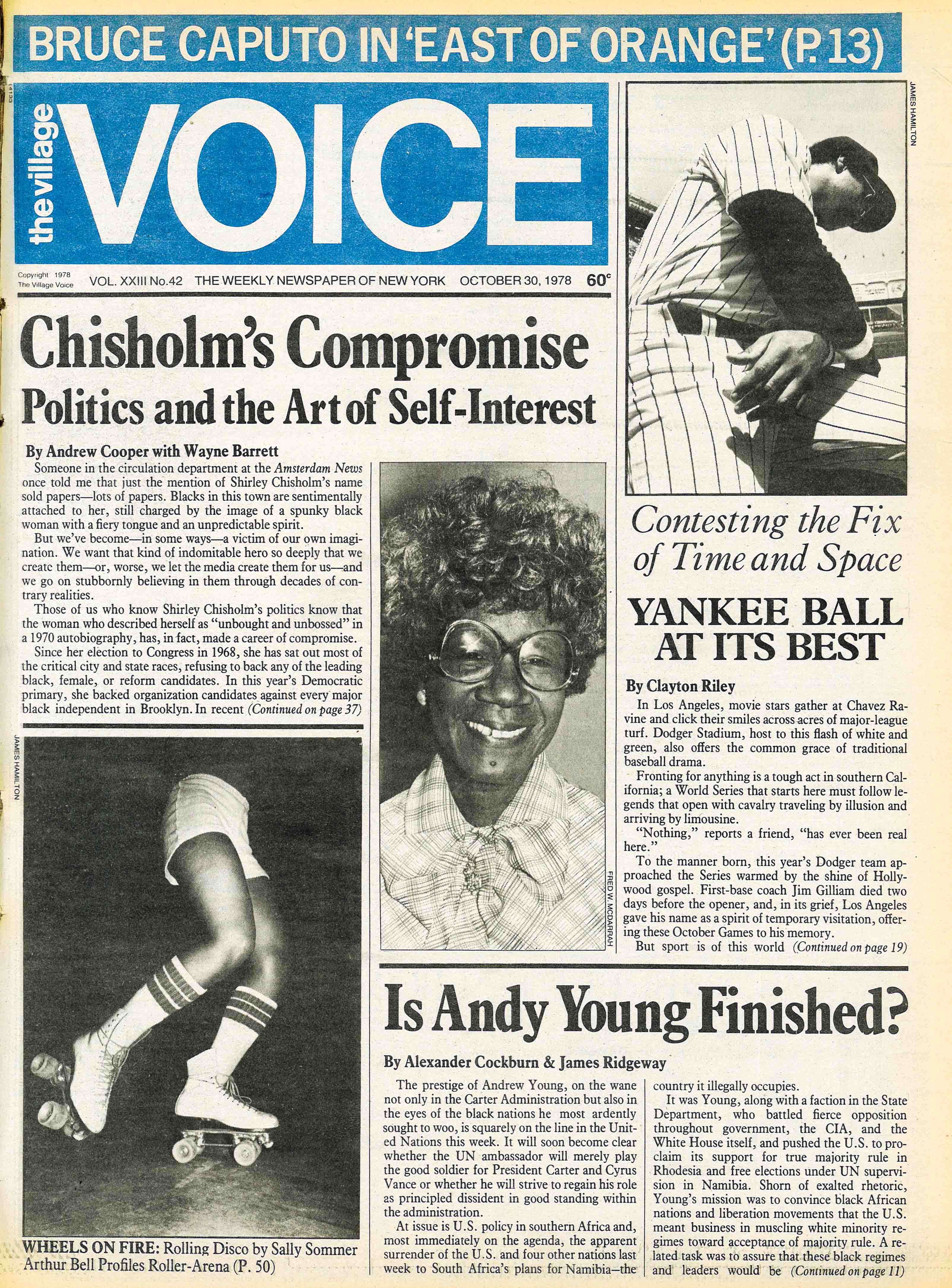 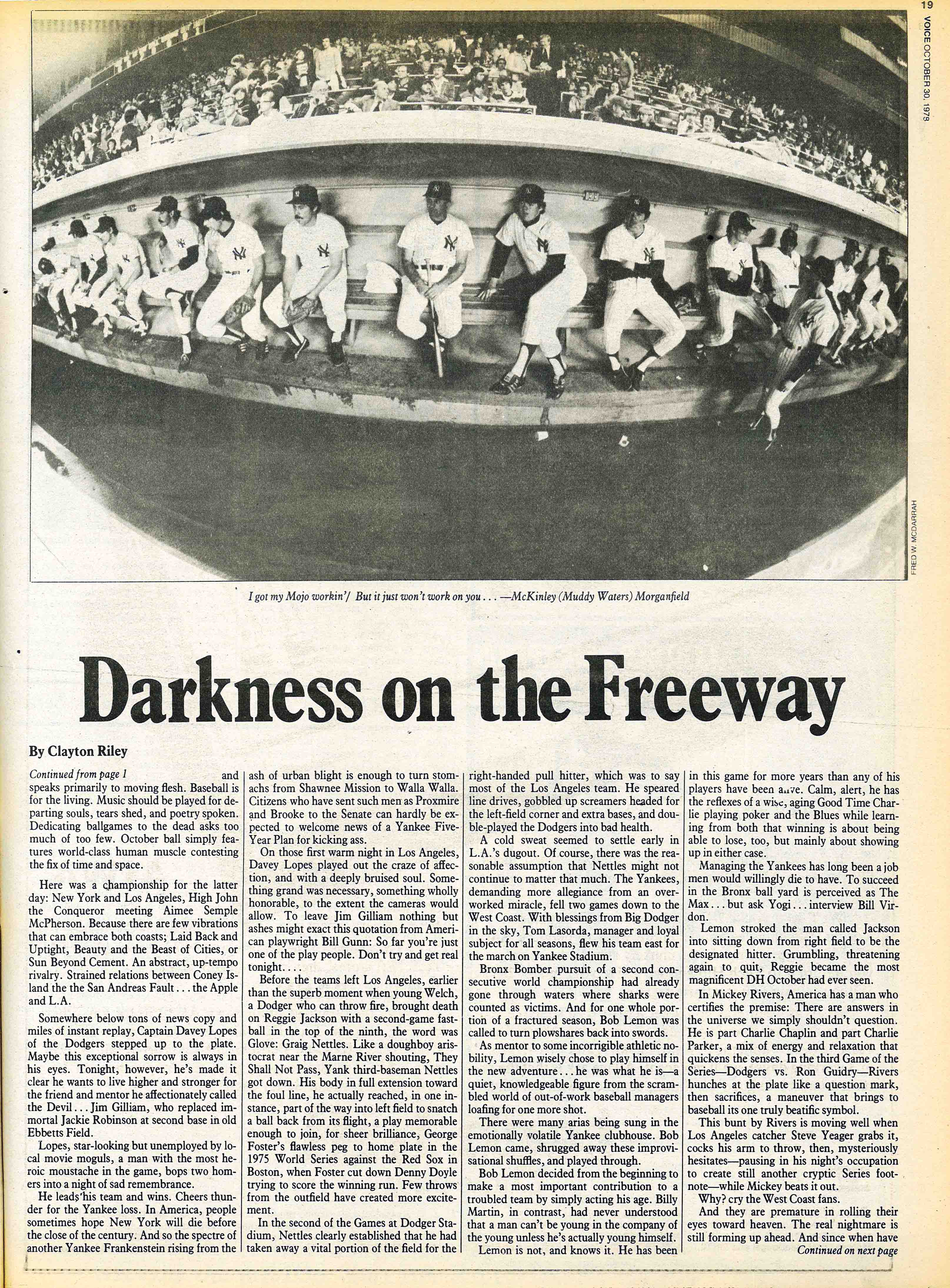 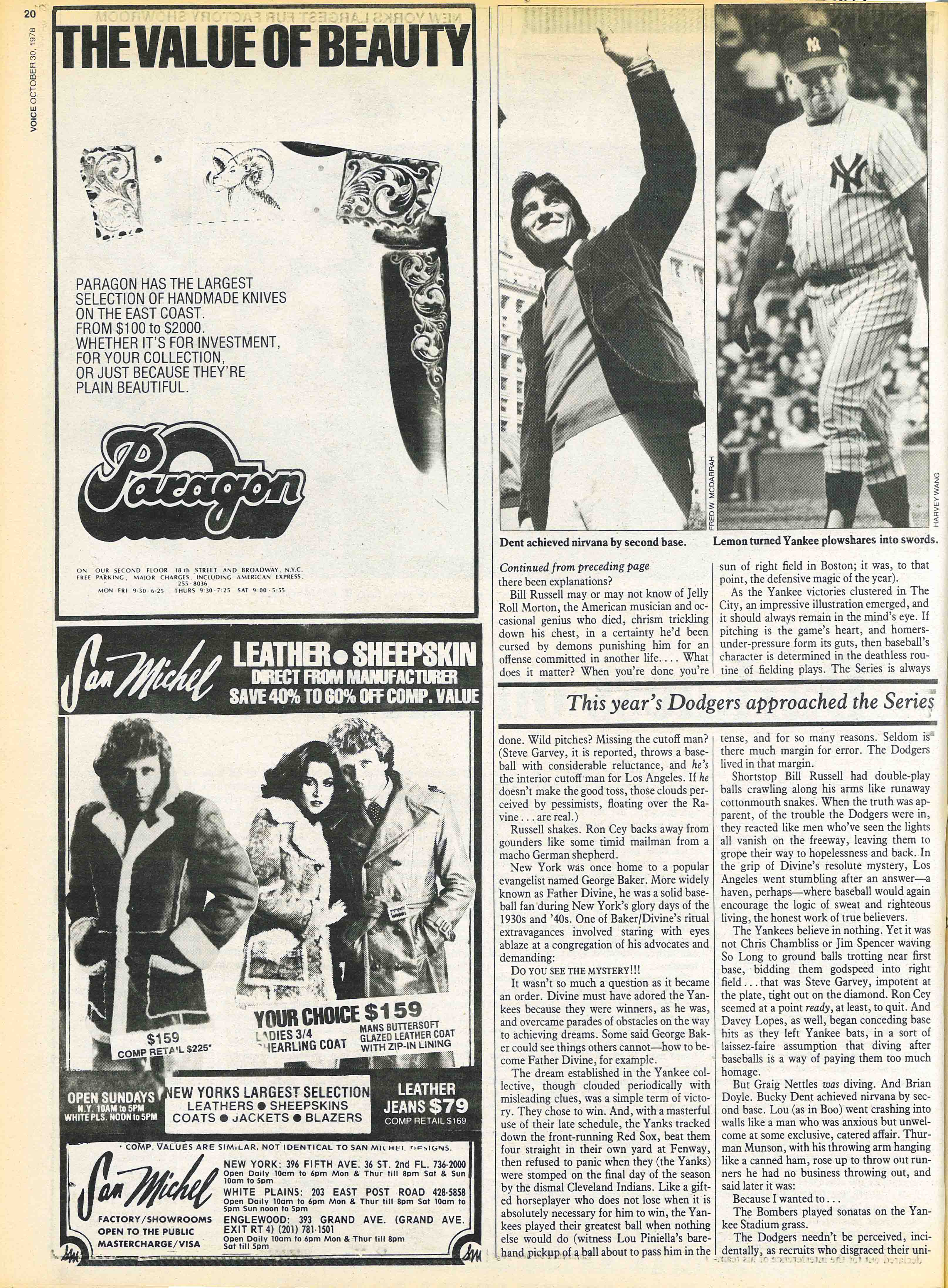 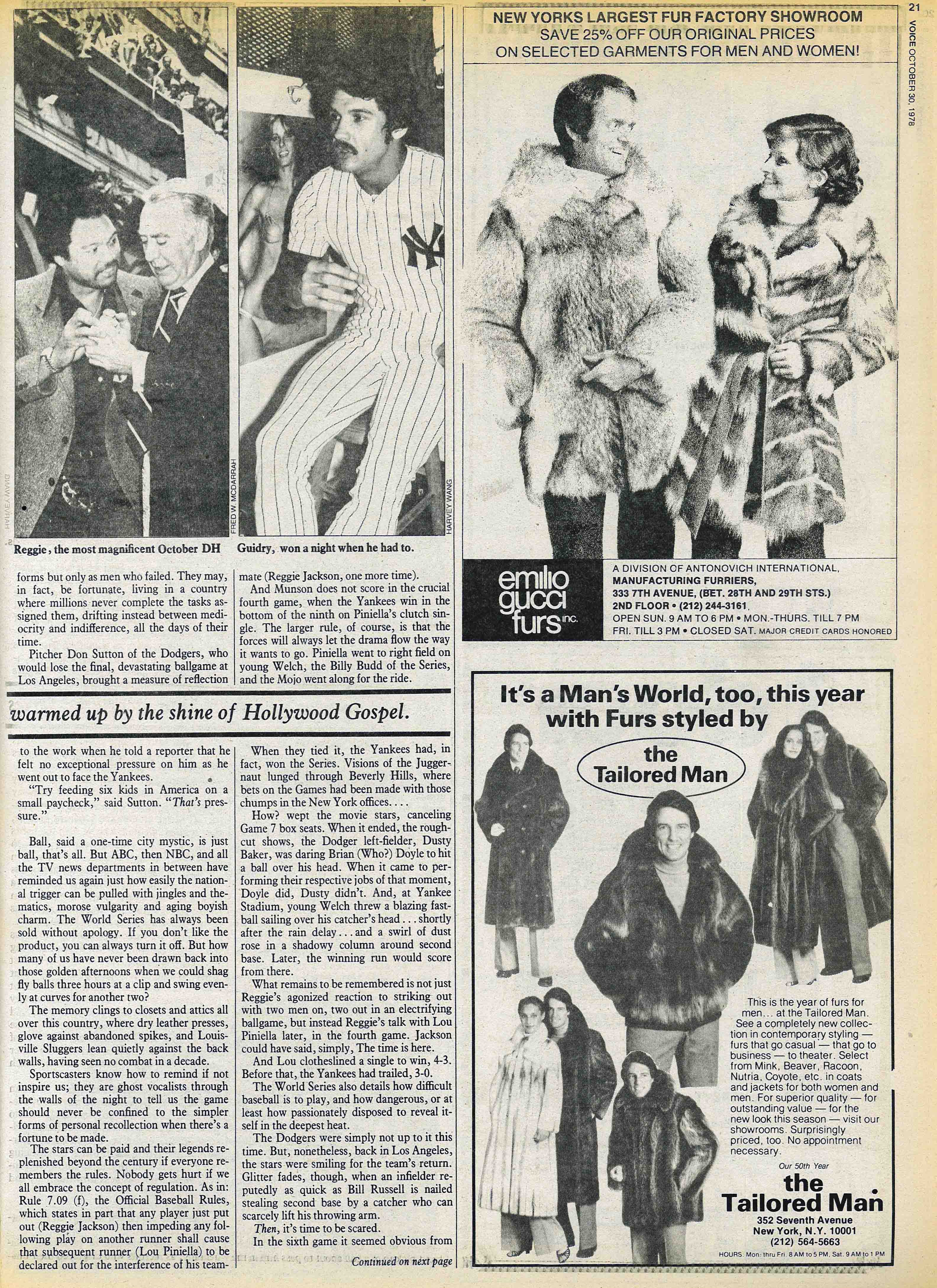 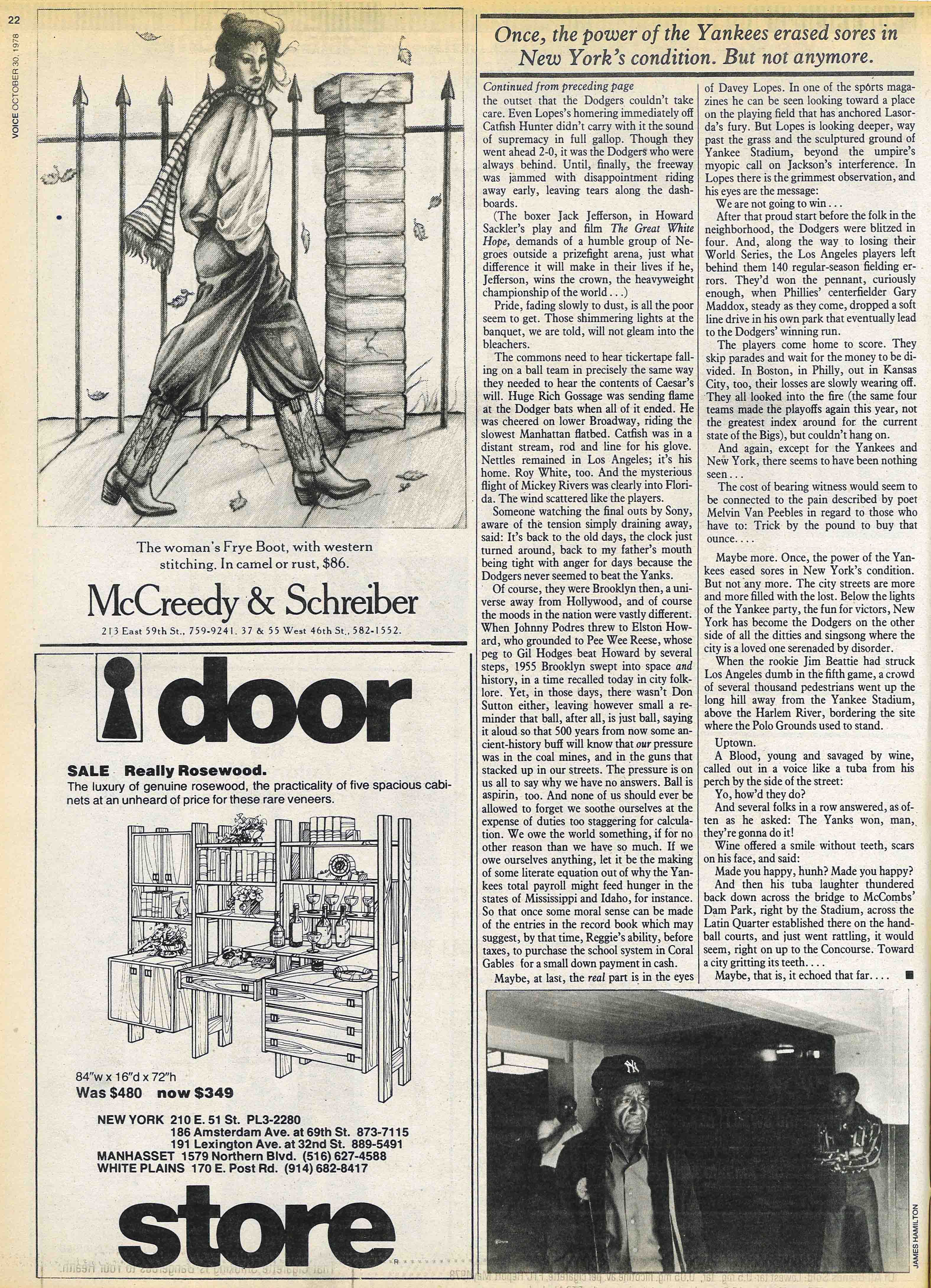 Next we turn to the January 28, 1980 issue where contributor Joel Oppenheimer opines on the superiority of the Dodgers’ Duke Snider over the Yankees’ Mickey Mantle and Willie Mays of the Giants when all three played center field here in New York in the 1950s. The article takes a more personal turn when Oppenheimer reminisces about pitcher Rex Barney’s odyssey in a Dodgers uniform—including the last time the right-hander wore one. 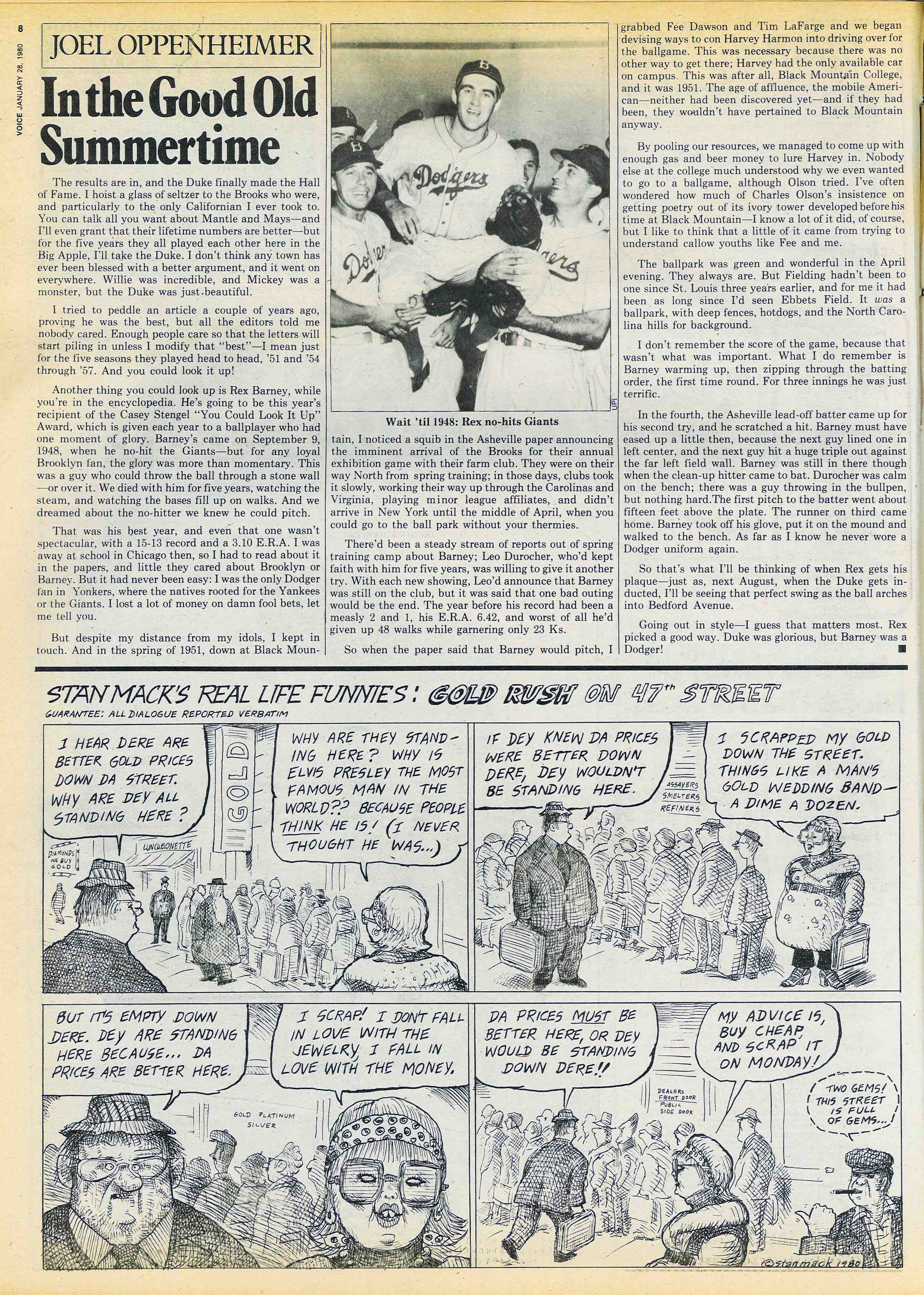 Finally, we take a look at a “lovely idea for a book, and I’m furious that David Ritz had it instead of me.” It’s the June 16, 1981 issue and Dodger fan Oppenheimer is lamenting that he did not conceive of The Man Who Brought the Dodgers Back to Brooklyn, a novel with a title that tells it’s tale. Oppenheimer worries, however, that “the rest of the world may not let it stay just a novel,” because a New York State Senator is agitating to rebuild Ebbets Field—but with Astroturf instead of grass. “The whole notion leads me to propose a corollary to my thesis that all things new are bad: all new versions of old things are even worse.” 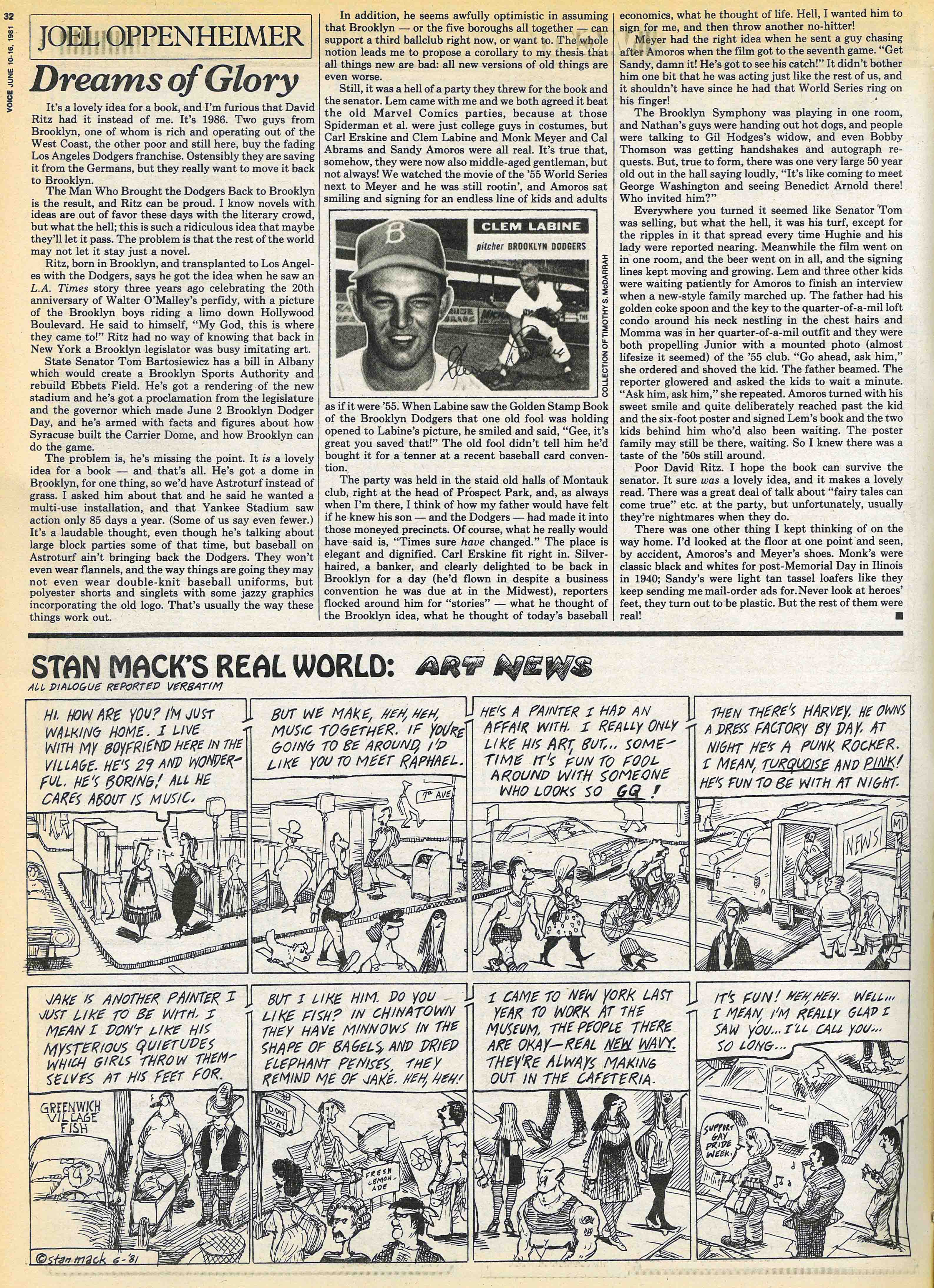