With its elevation of Judge Brett Kavanaugh to the Supreme Court earlier this month, the Senate served up a neat smackdown to the #MeToo movement, which for the past year had given women a glimmer of hope that their stories of sexual harassment and assault would finally be heard and believed, and that the men who perpetrated these acts would be held to account.

As we reflect on this backlash to women’s latest step toward full equality, we look back at another backlash against women’s progress, this time set in the Eighties. This was the decade in which women were shamed for the advances they’d made in the workplace, told they in fact could not have it all — that their career successes would lead to a lonely, childless life. This was the decade in which a joint Harvard-Yale study declared that a white, single, college-educated woman over thirty had a 20 percent chance of getting married (and a 2.6 percent chance after the age of forty), and in which a movie script about a single woman treated badly by a married man morphed into Fatal Attraction.

The Eighties’ anti-feminist backlash provided Pulitzer Prize–winning reporter Susan Faludi with the topic and title of her first book. Backlash: The Undeclared War Against American Women was published 27 years ago this month — just weeks after the Senate had ignored the accusations of sexual harassment against another Supreme Court nominee, Clarence Thomas, ultimately confirming him to the bench. In the book, Faludi posited that the anti-feminist backlash of that era had been “set off not by women’s achievement of full equality but by the increased possibility that they might win it. It is a pre-emptive strike that stops women long before they reach the finish line.” And so it goes nearly three decades later.

In the December 31, 1991, issue of the Voice, Ellen Cohn gave a mixed review of the book, writing that although it is “deeply felt and undeniably earnest, it is no rousing call to arms.” Which is not to say that Cohn disagrees with Faludi’s premise; far from it.

Describing the “counterassault” against feminists that Faludi details, Cohn writes that it “demonizes women’s liberation not only to halt women’s progress but to nullify it, simultaneously advancing the idea that for women, independence and self-determination lead only to sorrow.” Quoting Faludi, she continues, “It is most powerful when it lodges inside a woman’s mind and turns her vision inward, until she imagines the pressure is all in her head, until she begins to enforce the backlash, too — on herself,” then says, “Indeed, I have their names and numbers.”

Echoing language we still hear today, Cohn begins her review by noting the multiple occasions in which she’s heard a woman preface a learned analysis of “women’s second-class status” in America with the statement “I’m not a feminist but….” “Each woman,” writes Cohn, “in a rush from logic, history, and common sense, apparently believes that if she disavows the F-word, she’ll be safe; she’ll be exempt from those unsightly labels — ‘strident’  and ‘humorless’ — and the gains women made in the ’70s will still be hers. Sisters, they’re gone and going fast.”

Perhaps most chilling is when Cohn notes that “it’s hard to imagine more antiwomen teams than Regan-Bush or Bush–what’s-his-name” (referring to, of course, Dan Quayle, who campaigned against a fictional female character’s decision to raise a child on her own). One wonders what she’d have to say about the team in the White House today. 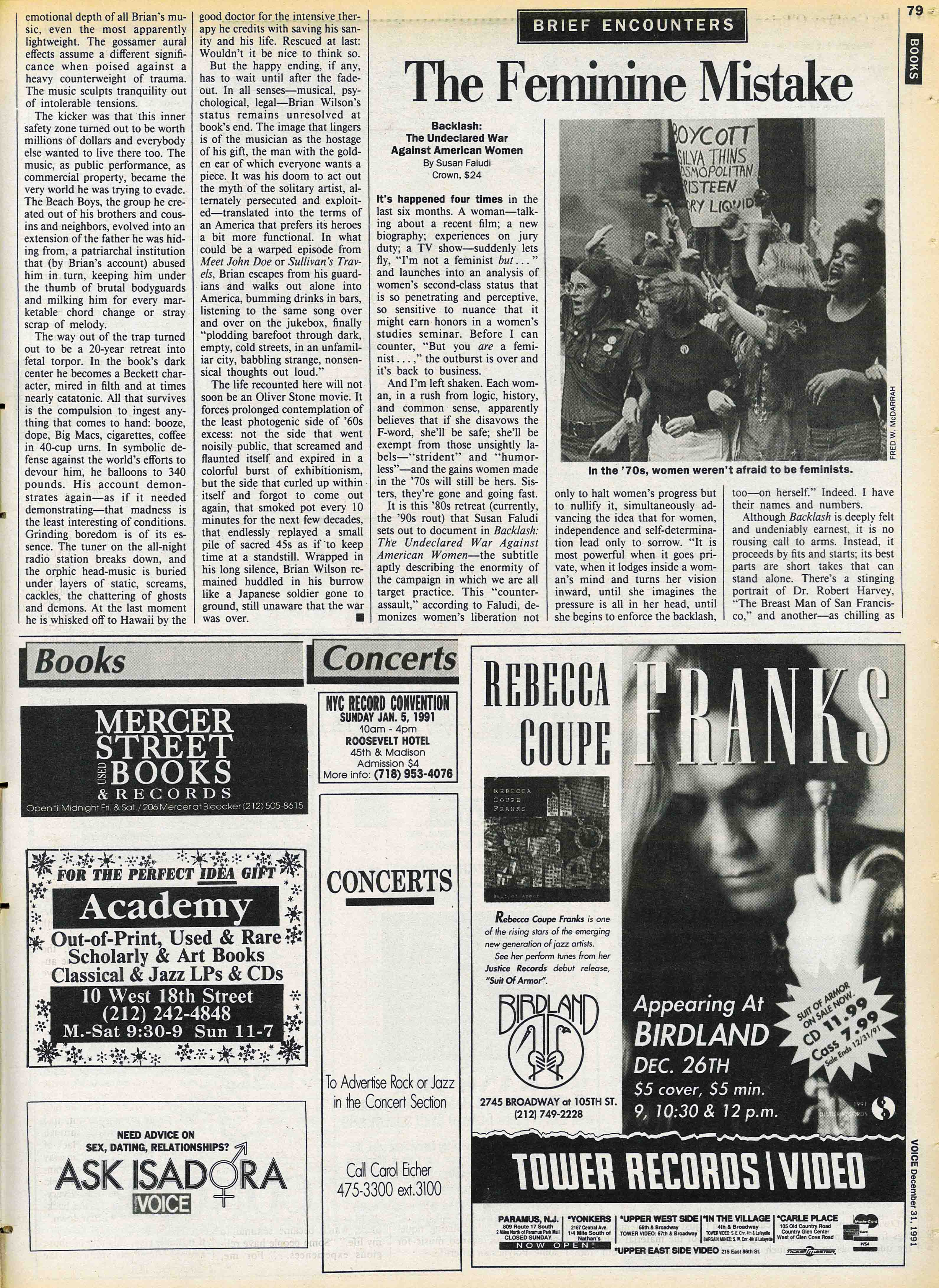 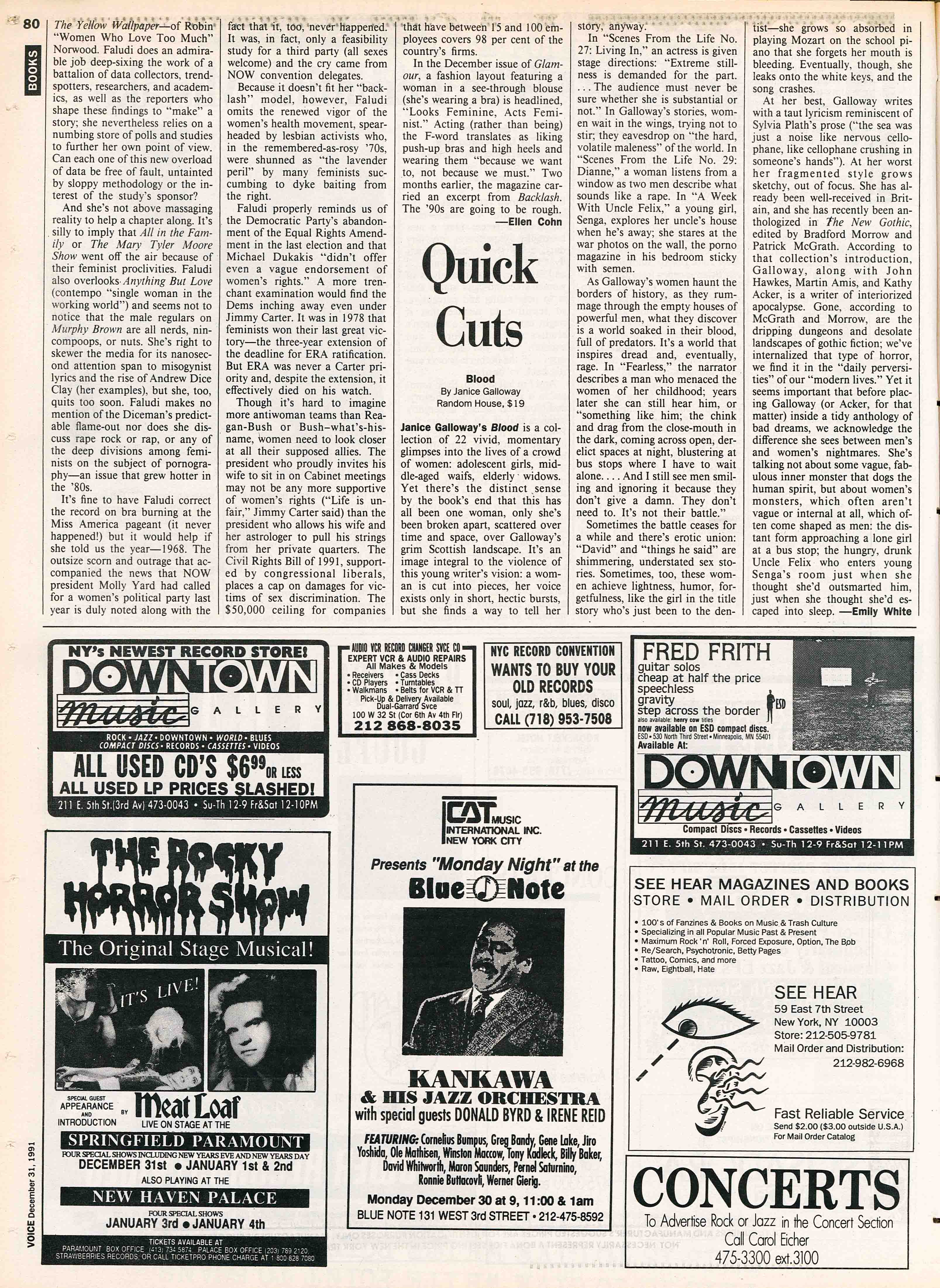