Janis and Jimi Jamming at the Singer Bowl

In 1966 a little-known singer out of Texas named Janis Joplin joined forces with a successful psychedelic-rock group from San Francisco. Their 1967 performance at the Monterey Pop Festival left Village Voice jazz critic Nat Hentoff in awe: “Her singing is a celebration — her voice and body hurled with larruping power that leaves her limp. And this member of the audience feels that he has been in contact with an overwhelming life force.”

Now it’s August of 1968 and Big Brother and the Holding Company are coming to the Fillmore East on Second Avenue at 6th Street. An ad in the Voice depicts the band in all their San Francisco finery of stripes, beads, boots, and sandals — plus one big dog. (Many years later, guitarist/founding member Sam Andrew told an interviewer where the compound name had come from: “Big Brother courtesy of George Orwell, and the Holding Company courtesy of a silly hippy pun. ‘Holding’ meant ‘possessing illicit drugs.’ We decided to put the names together, although some of the more forward thinking among us worried about whether such a lengthy name would fit on a record label or a marquee.” With their major-label debut coming out later that month, they’d have to find room to fit Joplin’s name up there, too.) 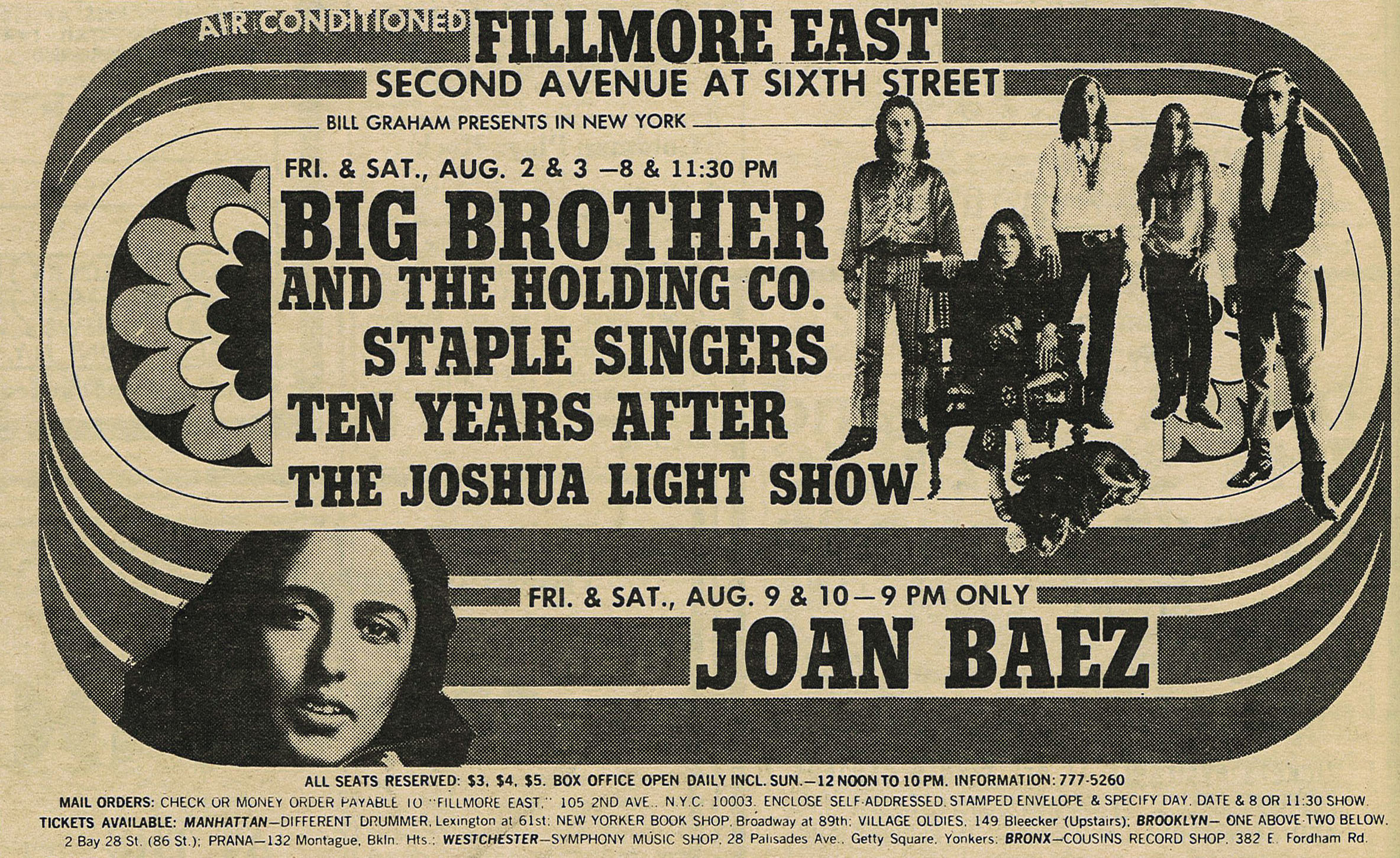 The following week, in the August 8, 1968, issue, the Voice sent music critic Annie Fisher to the Fillmore to cover the performance. Page 1 has a photo of Joplin belting out a song, a stark graphic created with Kodalith film, which bent all midtones to either black or white, imbuing the image with the dynamic of a strobing light show. Fisher conveys something that, for those who weren’t around to witness Joplin in concert, rings true. In recordings you hear a performer who doesn’t merely sing songs, but inhabits them, experiencing them over and over. “Janis Joplin is Janis Joplin, and there’s nothing to do but listen to her,” Fisher writes. “She lives more in one song than a lot of people do in one lifetime. I hope she doesn’t kill herself doing it. No amount of money or adulation can repay or replenish what she gives in each performance. Saturday at the Fillmore East: one more show to go, the first show full house on its feet, chanting for a second encore, MORE MORE MORE. The band had come back onstage, and I looked into the wings for her. It was a moment frozen in time. She stood back there, pulling herself together for one more time, and her evident exhaustion was raw and frightening. I’d like to forget that look, but I won’t for a long time.”

Fisher goes on to add that the band itself provided “variety in texture and tempo” to the songs. Joplin and Big Brother did a number of cover versions and made over such songs as Erma (older sister of Aretha) Franklin’s “Piece of My Heart” with their signature brand of throbbing psychedelia. Andrew said that the band “Big Brotherized” the song: “We didn’t have a choice. Given our talents and capabilities that was the only thing we could do. Erma’s ‘Piece of My Heart’ had a delicacy and a sense of mystery that was just beyond us.” Instead, Joplin reached inside herself to give the song a slashing, desperate, deeply personal edge that was completely her own. 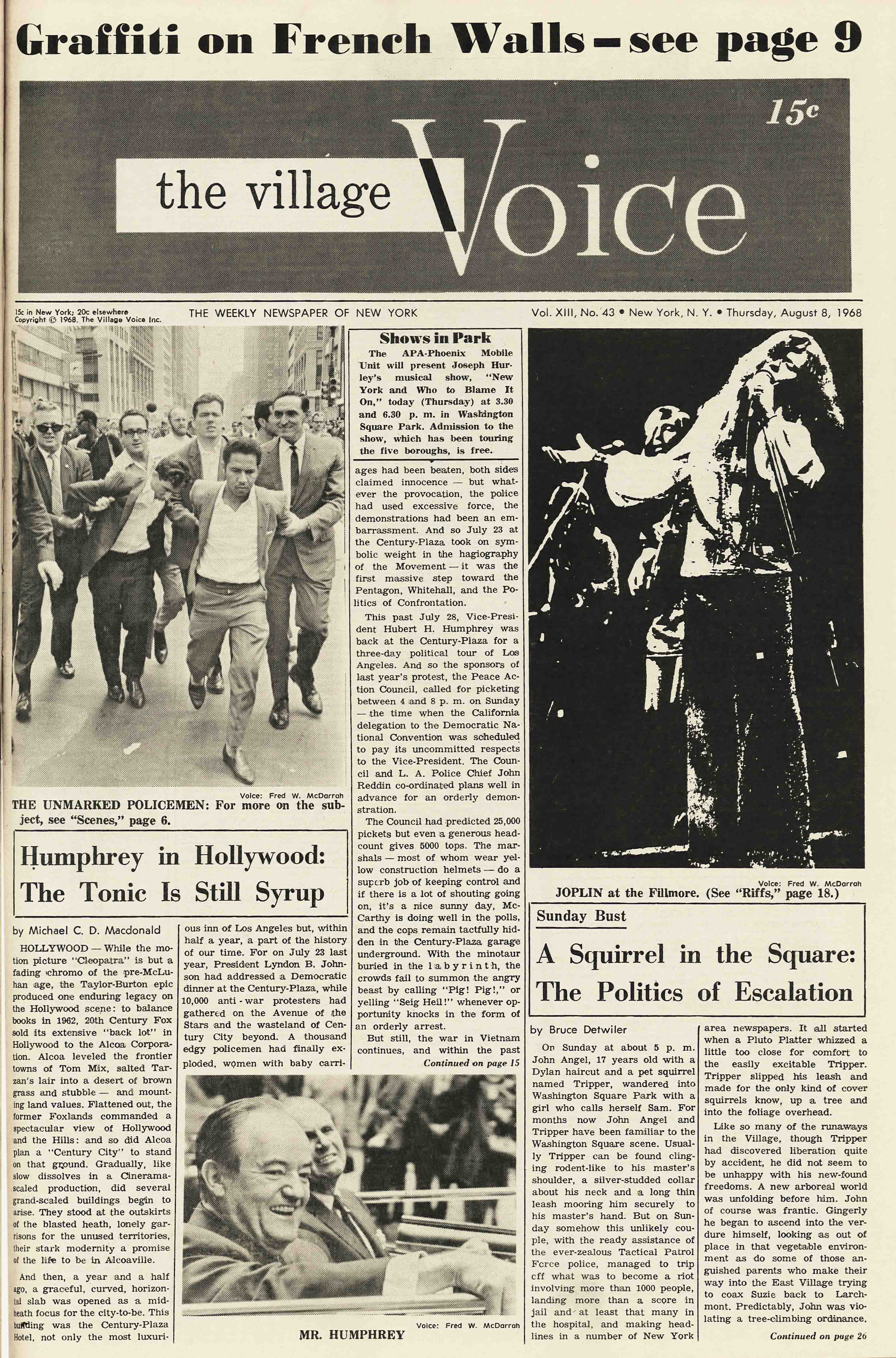 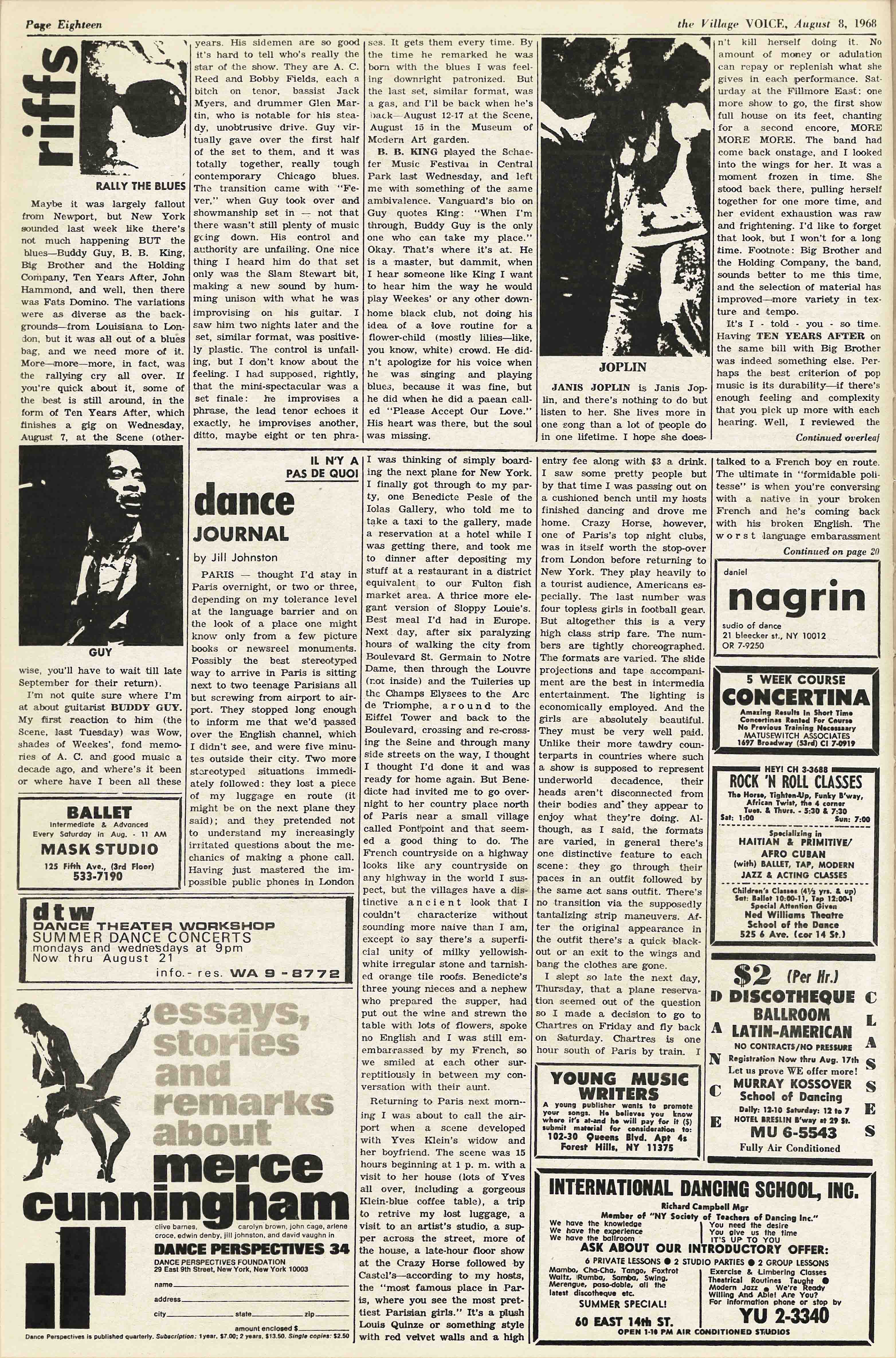 But the tiny singer couldn’t do this every night. In that same issue another ad alerts the freaks, heads, and kids that an even bigger bill was rolling into the Singer Bowl, a remnant of the 1964 World’s Fair built by the Singer Sewing Machine Company. (The venue would also host boxing matches and become a tennis stadium named for longtime Corona resident Louis Armstrong. It was demolished in 2016.) 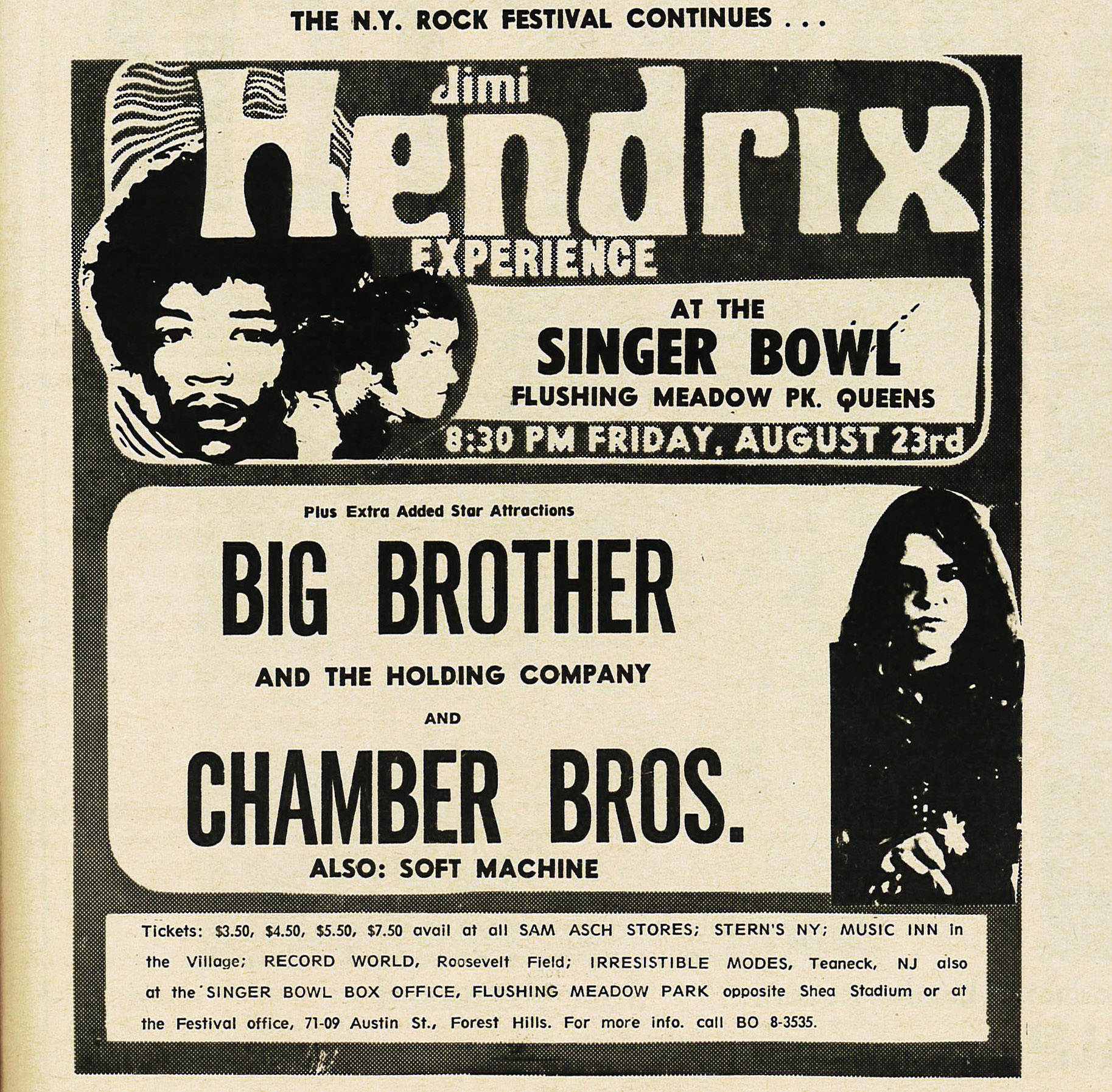 Fisher gets the plum assignment again. After some trouble finding the Singer Bowl in the wilds of Flushing Meadows Park — “an unmarked Moses maze of intersecting circles and crossroads” — she and her companion arrive at their seats and discover that the outdoor sound system is pretty bad; Fisher searches for improved acoustics amid the bleachers. The bands play on a sort of lazy Susan — a revolving stage — and after the Chambers Brothers finish their set with the huge hit “Time Has Come Today,” Big Brother and Janis come on. “ ‘Did you SEE what just happened?’ laughs Janis, off balance at the first turn of the bandstand. She’s swilling it down up there from a pint bottle. I wonder idly if the bottle contains weak tea, a stage set. These days, even the best have a shuck, right?…Something missing — the fire. Despite a perfectly respectable response, it’s not her night, not her house.”

Instead it’s Jimi Hendrix’s house. The guitar genius sets the tone by wiping his nose with a Confederate flag. Fisher hears something besides the music: “I didn’t know till tonight he was ‘discovered’ at the Cafe Wha?, which justifies just about everything that has gone down on MacDougal Street. He’s getting better than $500 a minute for this show, one hour, and that’s not an inflated price. He’s worth it. But he shouldn’t be playing this date. Rock outdoors is a gas, but stadium concerts should be left to groups like the Rascals or the Four Seasons, not anyone who has original musical ideas.”

Then she sees “some guy [who] has one of those long 2×8 or 2×10 crossbars of a police barricade up in the air. It’s an exquisite instant, the point of balance before the point of no return. I’ve never been in a riot. Shaken, I am suddenly aware of a weak, watery physical sensation that tells me a story of cowardice. I wouldn’t be any good. I’m not going to Chicago anyway” — she is referring to the Democratic National Convention starting that week in the City of the Big Shoulders, where everyone was expecting violence — “nothing in Chicago that a monkey woman can do. As suddenly as it started it’s all over, a phalanx of uniforms hustling out the musicians’ entrance, the kid apparently in the middle, the barricade apparently back in place.”

Politics, police, and violence were everywhere that summer. 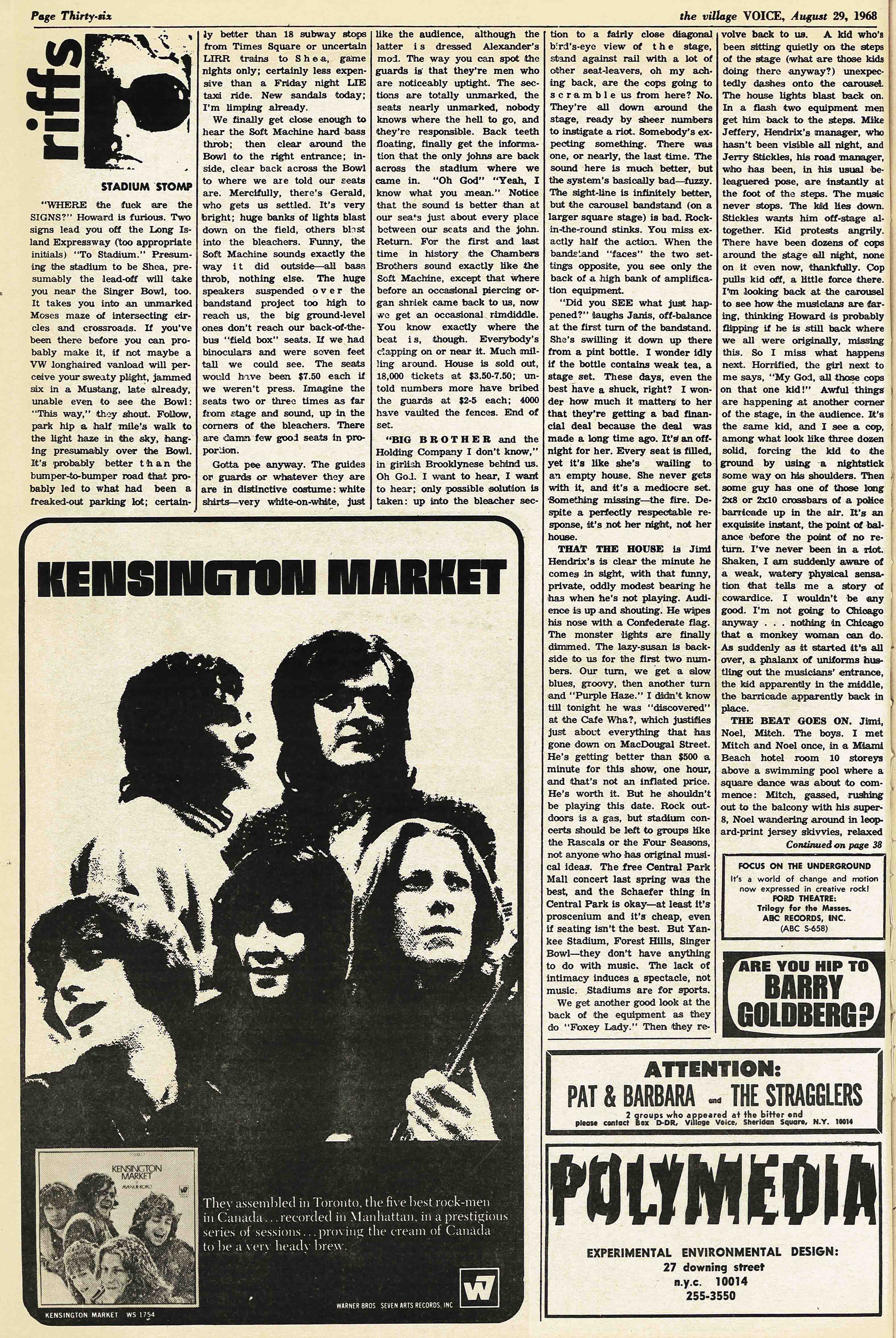 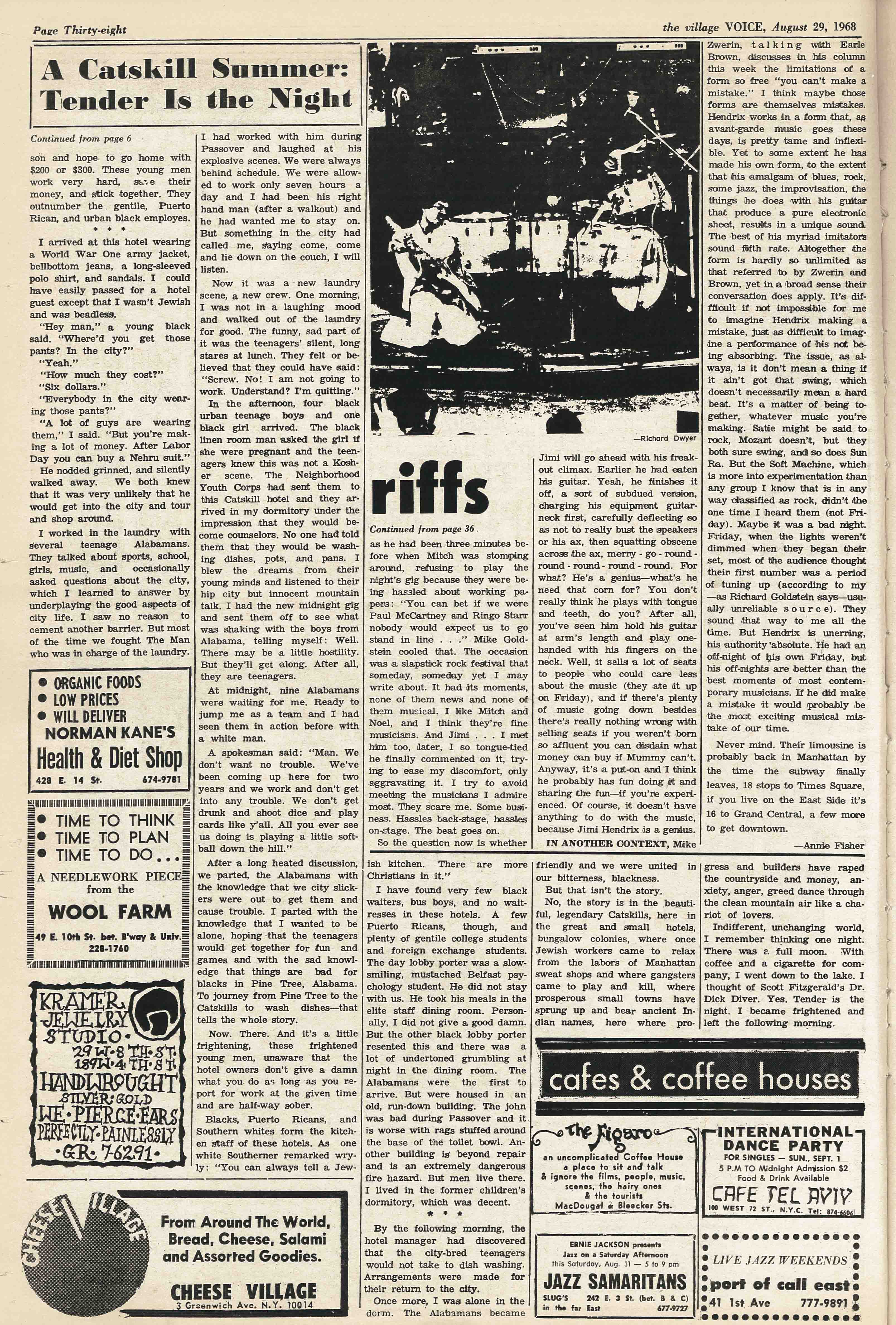 Janis may have had an off night at the Singer Bowl, but, just a bit more than two years before she would die of a heroin overdose at age 27, she was becoming a headliner of her own. That month of August 1968, Big Brother released Cheap Thrills, with cover art by another rising star of the counterculture, the underground cartoonist Robert Crumb. The copy in a full-page ad for the album in the September 5 Village Voice reads truthfully: “Janis Joplin. Big Brother and The Holding Company. They’re going to wipe you out.” But the boys in the band are nowhere to be seen. Just Janis in elephantine bell-bottoms and a world-conquering smile. 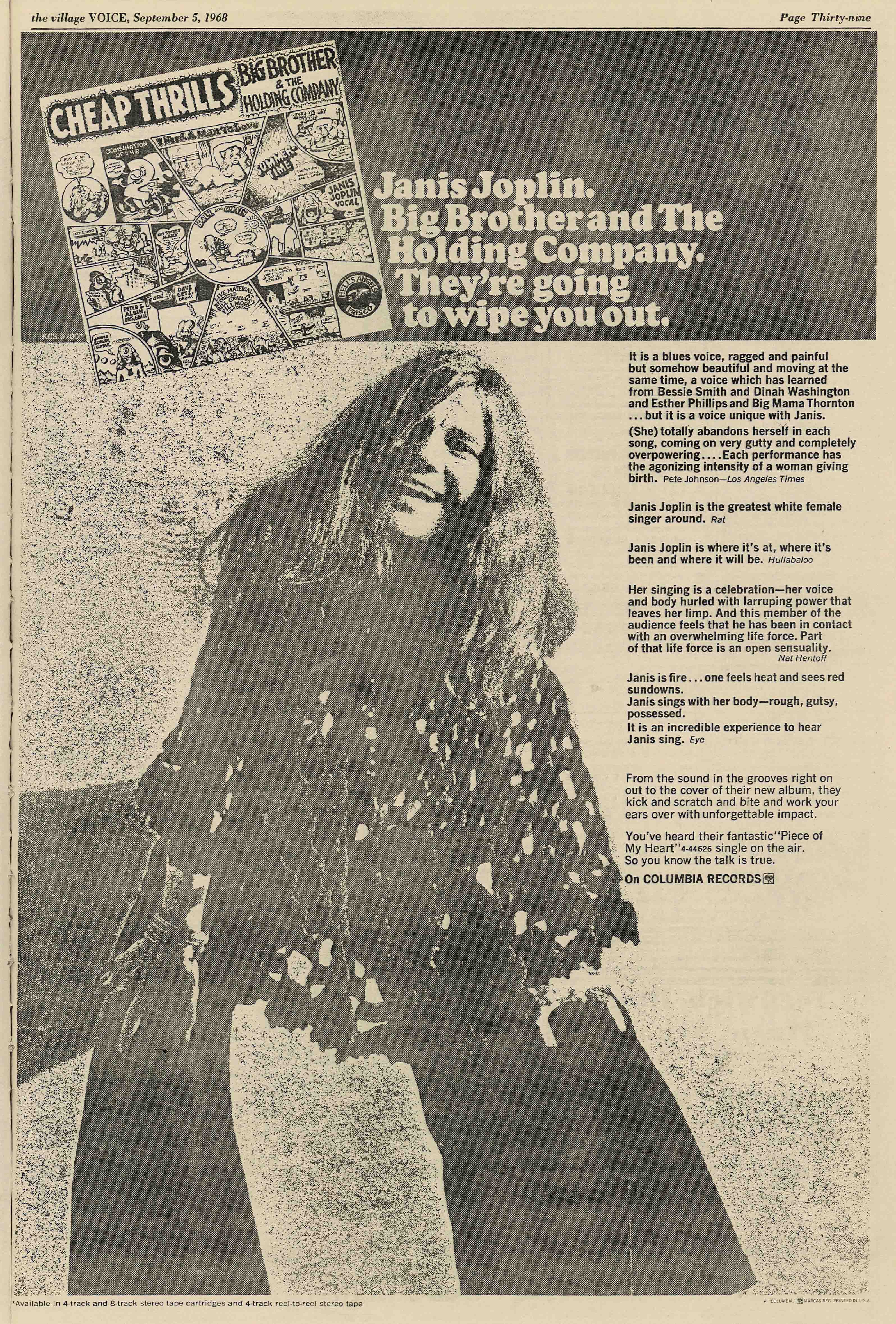