With freedom of the press under attack, we look back at a fearless reporter who fought the good fight until his life was cut short

I got a hot tip when I read an Esquire magazine interview with the accomplished writer Ron Rosenbaum, known for his insightful and compulsively readable long-form pieces. In 1971 he had published “Secrets of the Little Blue Box,” about a group of kids known as “phone phreaks” who were hacking the long-distance telephone system. The article was so exhilarating that a 21-year-old Steve Wozniak called his 16-year-old friend Steve Jobs to rave about all the revelations he was finding on Esquire’s pages. Rosenbaum’s prescient investigation has been cited as a “‘foundation event’ for the creation of Apple Computer.”

But what really caught my attention in the 2017 Rosenbaum interview were these lines, where he talks about applying for a job at the Village Voice after working at the Fire Island News, in the summer of 1968: “At the end of the summer I went in for an interview and to my surprise got hired on the spot because they had a slot for counterculture reporting. I don’t know if the name Don McNeill means anything to you but he was the early era of counterculture reporting. He was very talented, famous for having his bloody visage blown up on the front page of the Voice. Anyway, McNeill was involved with a bunch of people in a commune in Massachusetts and that summer he walked into a pond and didn’t come out. And there’s still controversy whether it was a suicide or an accident. There was a replacement for him that didn’t work out so there was an opening.”

The name Don McNeill didn’t ring any bells with me, but the picture Rosenbaum mentioned did. I knew I had seen it at some point during my years of flipping through the yellowed pages of the Voice’s archive volumes.

First I checked the card catalog we keep in the archive room, an incomplete but invaluable resource of Voice — and, therefore, postwar American — history. Among maybe two dozen entries I found the ones above, which give a clear indication of McNeill’s counterculture beat. One article we will definitely have to resurface one of these days is the piece on LeRoi Jones (Amiri Baraka), in which the poet-playwright-thinker was being tried for “possession of weapons and poetry.”

But I wanted to find the photo and story Rosenbaum remembered, and I had to go a little further into that year of 1968. I found it in March.

McNeill had gone to cover a “Yip-In” at Grand Central: “All the brass was watching and the cops were having a ball. ‘It was the most extraordinary display of unprovoked police brutality I’ve seen outside of Mississippi,’ Alan Levine, staff counsel for the New York Civil Liberties Union, said at a press conference on Saturday. ‘The police reacted enthusiastically to the prospect of being unleashed.’” The piece goes on to describe a police riot: “Cops hit women and kicked demonstrators who had fallen while trying to escape the flailing nightsticks. It was like a fire in a theatre.” Obviously, from the picture — which both Rosenbaum and I remembered — McNeill had been in the middle of the mêlée. But when I turned to the jump page, it was gone. Aaarrrgghh. An occasional occurrence — some cretin tears pages out sometime over the past half-century.

But then, a few months further on, I found the bad news. In the August 15, 1968, issue, film critic Leticia Kent writes a heartfelt remembrance of McNeill, who had drowned in a pond in Monroe, New York. (Rosenbaum remembered it as Massachusetts, but the distinction doesn’t really matter. McNeill was 23. Rosenbaum has other memories — possible suicide, for example — that I couldn’t find anything about.)

In her article, Kent notes that both of McNeill’s parents were reporters and that he “vowed not to become a newsman. But he joined The Voice as a staff writer in the summer of 1966. No contradictions. The Village Voice, he insisted, was not a newspaper.” Kent adds, “As a writer, he was older than himself at 23. He was an illuminator, humble before his own illuminations…” Indeed, McNeill wrote about police brutality partly because he experienced it firsthand. But Kent also quotes passages that, from the brief encounters with McNeill in the archives, ring as true as we can know someone from newsprint.

Here’s one example, from a piece about a “Be-In” in Central Park’s Sheep Meadow: “People climbed into trees and made animal calls, and were answered by calls from other trees. Two men stripped naked and were gently persuaded to re-clothe as the police appeared. Herds of people rushed together from encampments on the hills to converge en masse on the great mud of the meadow. They joined hands to form great circles, hundreds of yards in diameter, and broke to hurtle to the center in a joyous, crushing, multi-embracing pigpile. Chains of people careened through the crowds at full run. Their energy seemed inexhaustible.

“The password was ‘LOVE’ and it was sung, chanted, painted across foreheads…”

In a 1970 archive volume, I discover that a collection of McNeill’s writing was published that year. A New York Times review from that summer reports that “the book hangs together, which it does better than most any collection of short pieces I have read, [and] is a tribute to the pure line of McNeill’s preoccupations. His preoccupations were those of his friends; often, in fact, he wrote about his friends, and it seemed almost accidental that in chronicling the lives of this collection of Buddhists, Diggers, street‐people, runaways, speedfreaks and acid‐heads, he was also chronicling one of the most radical cultures to have emerged in 20th-century America.”

Plus, we get the missing jump page about that police beating. But it seems beside the point now, in the larger scheme of what McNeill — a reluctant reporter who found a home with a paper that understood — accomplished in two very brief years. His book may be out of print, but over time his stories will be back in print, such as it is, here at From the Archives.

This article from the Village Voice Archive was posted on August 17, 2018 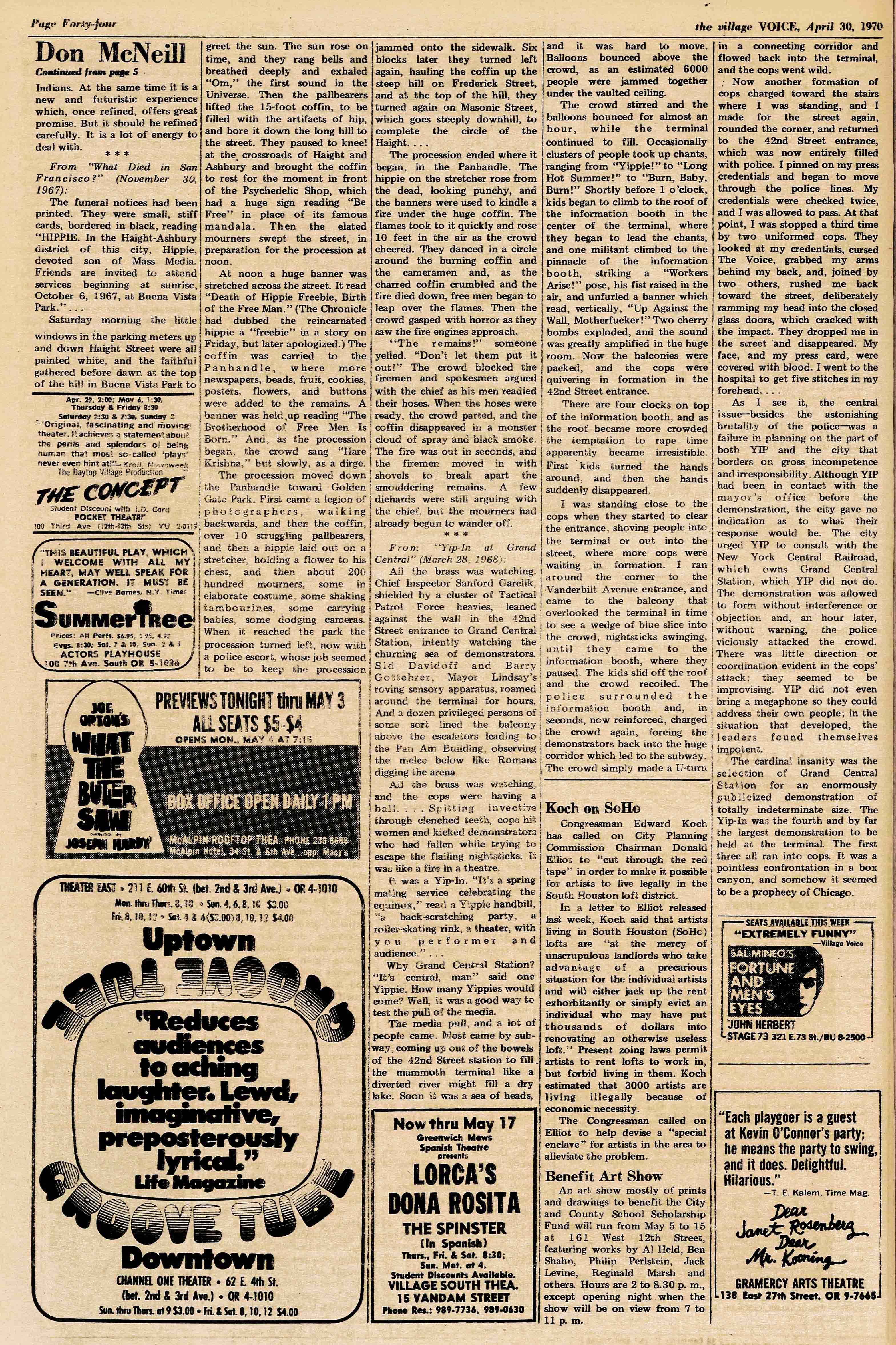