1962 was a good year for pop culture. The Beatles released “Love Me Do”; Andy Warhol discovered Campbell’s soup; John Glenn went into orbit; Bob Dylan played Carnegie Hall; and Steve Ditko, a 34-year-old journeyman comics artist, co-created Spider-Man. Ditko died in his West 51st Street apartment on June 29, at age 90, prompting a surge of wistful recollections from commentators and fans recalling their youthful identification with the teenage superhero who, co-creator Stan Lee once said, “gets sinus attacks, he gets acne and allergy attacks while he’s fighting.” The gangly Spider-Man launched one of the most successful movie franchises in history, but Ditko had already pushed well beyond the “cinematic” — an adjective often applied to his page layouts — to formal, narrative, and aesthetic frontiers unique to the comics medium. This would become most apparent in the mid 1960s, when Ditko and a stable of topflight freelancers were taking turns dazzling readers on the pages of Jim Warren’s concisely titled black-and-white horror magazines Creepy and Eerie.

Ditko began his career after serving in the Army in postwar Europe, moving to New York to study comic-book illustration at the Cartoonists and Illustrators School (later, the School of Visual Arts) under Jerry Robinson, an artist who worked on Batman comics and created the Joker character.

In 1954, Ditko began illustrating (and sometimes writing) horror and suspense stories for Charlton Comics, a publisher that paid low rates but allowed artists wide creative latitude. The limbs of Ditko’s figures were often stretched to extremes, hands thrusting toward readers, fingers writhing; close-ups of eyes would fill panels, adding tension between characters seen at varying distances. Such visual strategies were enhanced by abstract webs — sometimes colorful, often pure white — which might represent fog or smoke or just mysterious ectoplasm, all the better to conjure run-ins with criminals, encounters with ghosts, and journeys into ultra-dimensional time and space warps. Ditko, like all great comic artists, understood that unlike in a movie, where even the most powerful images must follow one after the other, he was presenting readers (who are also viewers) with a full page, which would not only tell a story but also work as a collage of light and shadow, shape and perspective, volume and line.

Comics were cheaply produced — Charlton’s magazines in particular were notable for pages by turns flooded with ink or barely legible from worn-out printing blankets. So comics artists employed heavy outlines, because detailed draftsmanship was often muddied by slapdash color registration. Ditko’s bold compositions withstood these degradations better than most. In addition to Spider-Man, Ditko created the Doctor Strange character for Marvel, and his swirling compositions were a perfect fit for the master of mystic arts’ astral journeys into psychedelic realms. (In The Electric Kool-Aid Acid Test, Tom Wolfe describes LSD advocate Ken Kesey sitting “for hours on end reading comic books, absorbed in the plunging purple Steve Ditko shadows of Dr. Strange.”) 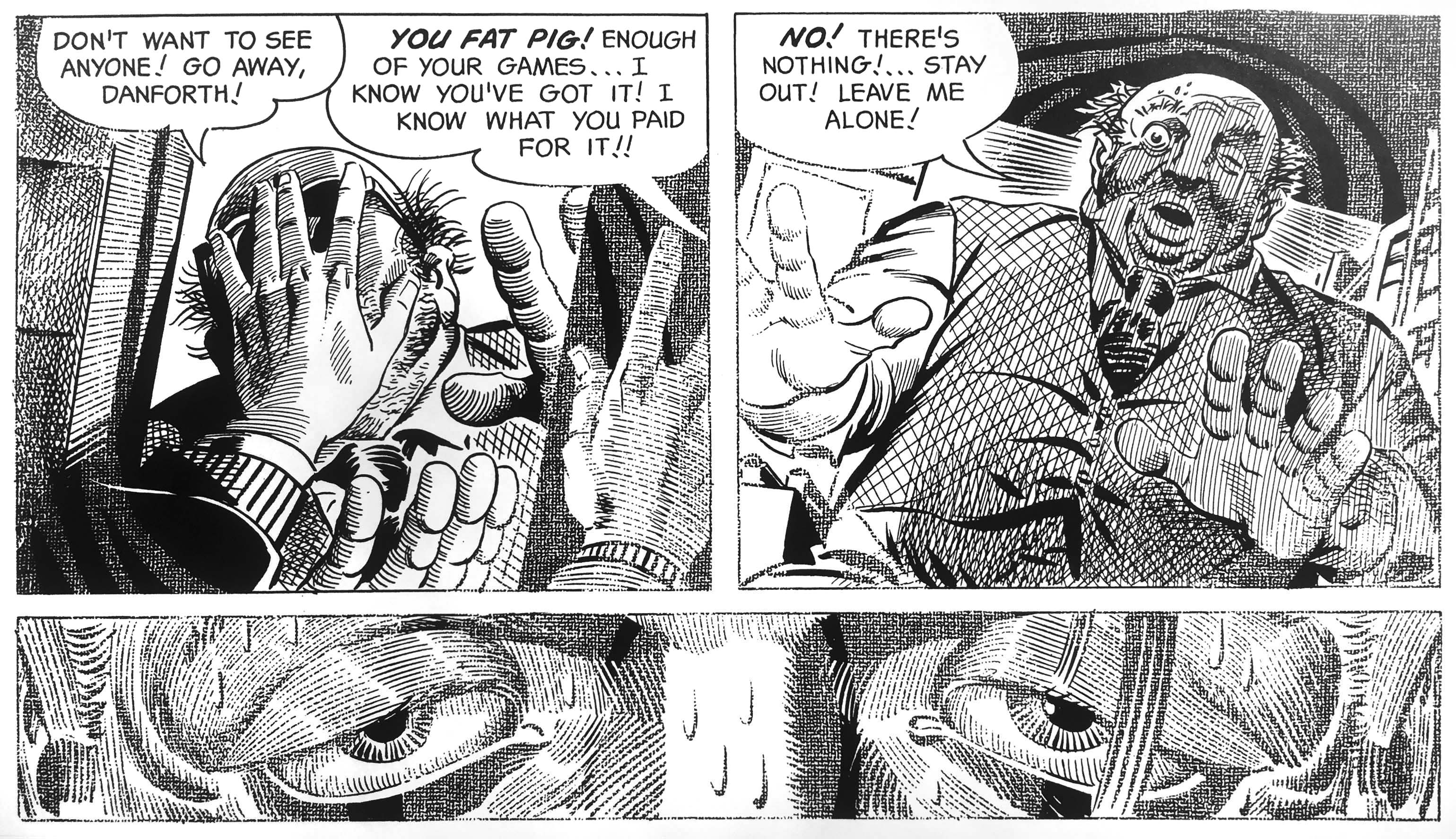 The sheer artistry of Ditko’s dynamic mix of abstract composition and elastic figuration received showcase treatment in Warren’s black-and-white horror publications. A typical Warren mag from the mid to late 1960s was a highlight reel of some of the best draftsmen this country ever produced — in each issue’s half-dozen or so stories, readers might get Reed Crandall’s woodcut-like drawings adapting Edgar Allan Poe’s “Hop-Frog,” Angelo Torres’s mix of film stills and noir lighting in a twist on The Phantom of the Opera, moody graveyard scenes in misty grays by Gene Colan, or the hyper-real figures and passionate layouts of a Neal Adams vampire tale. 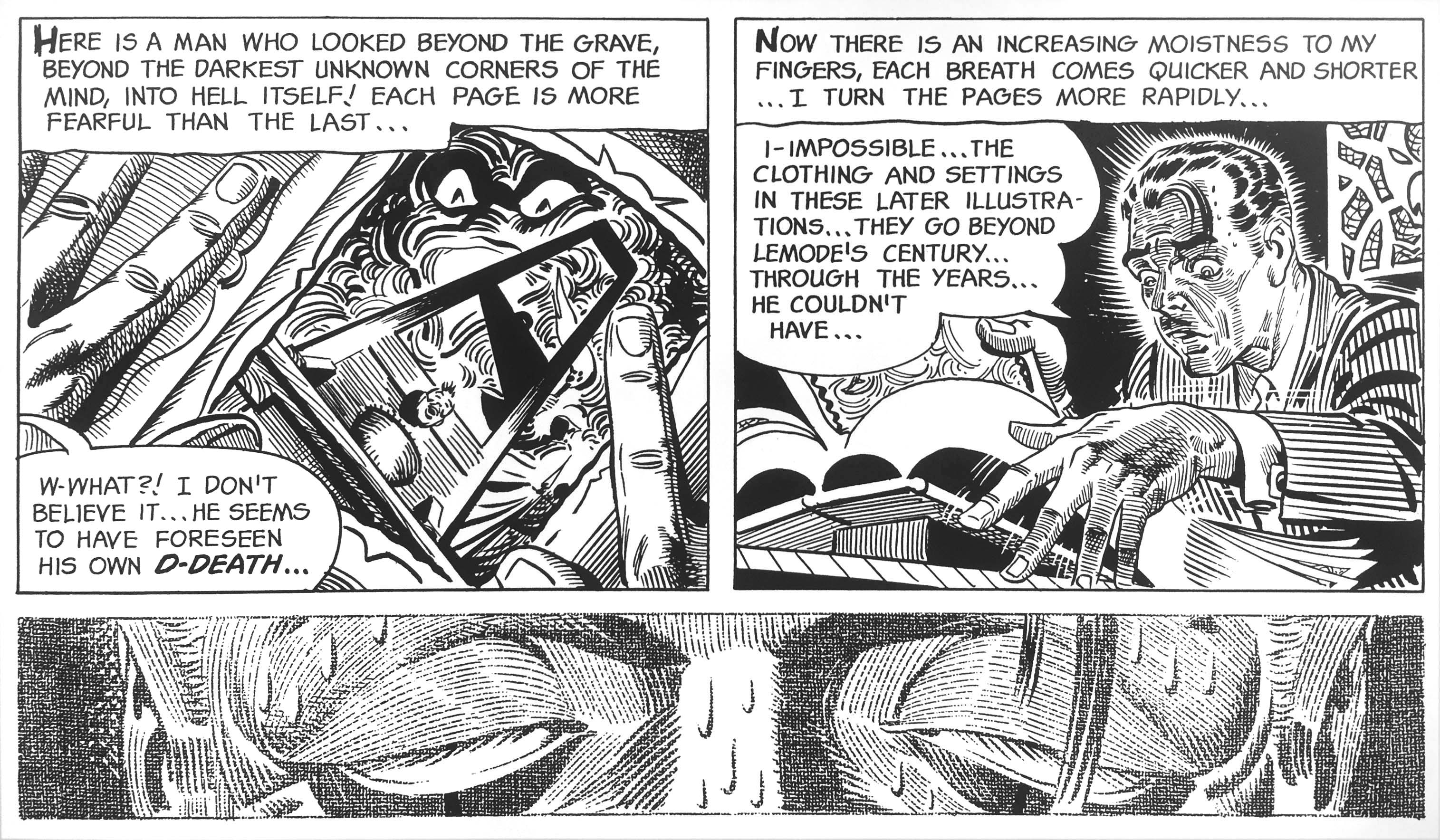 Between 1966 and ’68, Ditko drew sixteen stories for Warren, all but one of them scripted by the incredibly versatile Archie Goodwin. Two examples, done in polar-opposite styles, show Ditko at the top of his game. In “Collector’s Edition!,” from Creepy #10 (1966), Ditko used concise crosshatching to achieve expressive tonalities emphasizing the tension that arises when a slovenly dealer of occult books taunts a fanatical collector with the possibility of obtaining a rare masterpiece detailing the darkest of the diabolical arts. The close-ups of eyes Ditko deployed for compositional variety a decade earlier are here arrayed in a narrative sequence that punctuates the antagonism between buyer and seller, which shortly escalates to murder. Goodwin — as sharp a yarn-spinner as ever came down America’s pop-cult pike — was no doubt having fun with the collecting manias that were driving the burgeoning comic-fandom phenomenon. The blasphemous tome featured in the story, Dark Visions, written by “the Marquis Lemode,” contains both stygian realms of evil and predictions of the future, giving the collector a preview of his own onrushing demise. Ditko’s precise line work propels Goodwin’s entwined narrative to its sardonically surprising conclusion.

But it’s in Creepy #13’s “Second Chance!” (1967) that Ditko displays ink-wash chops that, in their verve and subtlety, were unlike anything he achieved in mainstream comics, the delicate gradations of gray overlaid with white filigrees impossible to reproduce in color comics. Ditko’s crepuscular ambience enhances Goodwin’s plot, which begins and ends amid graveyard dirt and in between takes a trippy plunge into a hell filled with undulating demons, flailing victims, and diaphanous mists. The broad range of shadows and patinas of light give Ditko’s figures a supple grace he rarely equaled in his superhero comics.

Notoriously reclusive, Ditko spent his last decades more and more consumed by a rigid — not to say black-and-white — view of the world, inspired in no small part by the stark divisions between good and evil as espoused by writer-philosopher Ayn Rand. Although he did create more characters in those passing years (most notably Mr. A., a humorless vigilante who wore metal gloves, all the better for pummeling moral trespassers), Ditko never surpassed the sheer graphic elation of his Warren work. All the gray areas were gone.