This Independence Day we’re taking a trip to 1976 in the Village Voice Wayback Machine. Among other questions: Why was a donkey climbing a skyscraper in an ad for Korvettes department store?

Less than a year after President Gerald Ford told New York that the federal government would not bail the city out of its fiscal crisis (which led to the infamous Daily News headline “Ford to City: Drop Dead”), Gotham gussied itself up to celebrate not only America’s Bicentennial but also the 1976 Democratic National Convention, which would nominate Jimmy Carter. (Who, with the help of New York State’s 41 electoral votes, would go on to defeat Ford in a close election.)

It was a unique convergence of events in the city — first the Bicentennial hoopla, and then the convention from the 12th to the 15th. Of course, New York was — even more so than now — the media capital of the world, but anyone who has ever researched cultural history knows that advertising can be as revealing about the times as editorial content. With that in mind, behold some choice samples of Independence Day carnival barking. 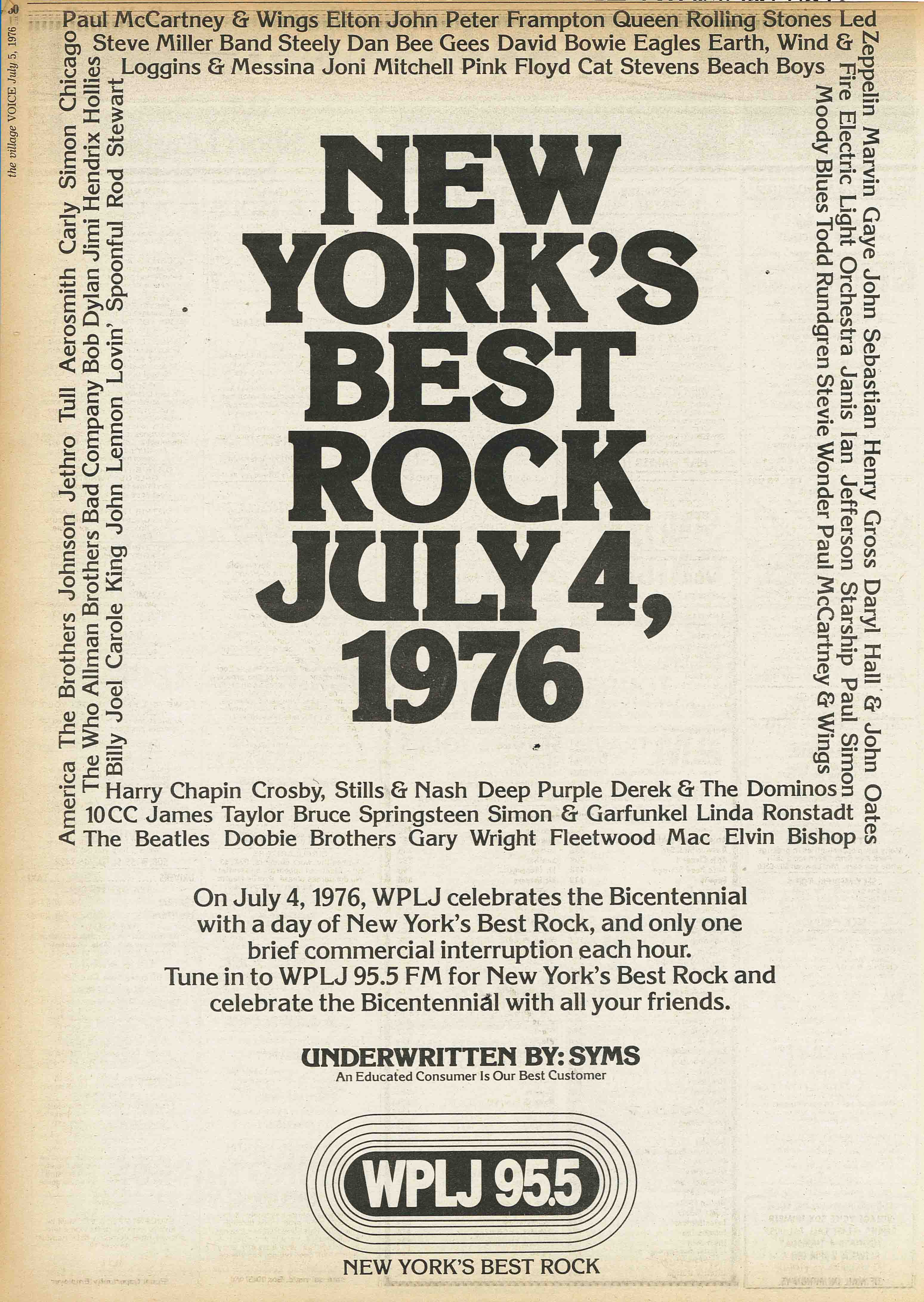 America might have won the Revolutionary War and gone on to invent rock ’n’ roll, but, judging by the holiday playlist of one of the city’s behemoth FM radio stations, the British were beating us at our own musical game. That relative Jersey newcomer Bruce Springsteen was indeed tearing up the airwaves, but DJs were still loyally spinning such stalwarts of the British Invasion as the Beatles (together and solo), eminences such as Led Zeppelin and the Rolling Stones, and Seventies hitmaker Elton John in heavy rotation. This was the advent of “classic” rock — if you wanted to hear real pioneers, such as Elvis, Jerry Lee, or Little Richard, you’d have to find an “oldies” station. 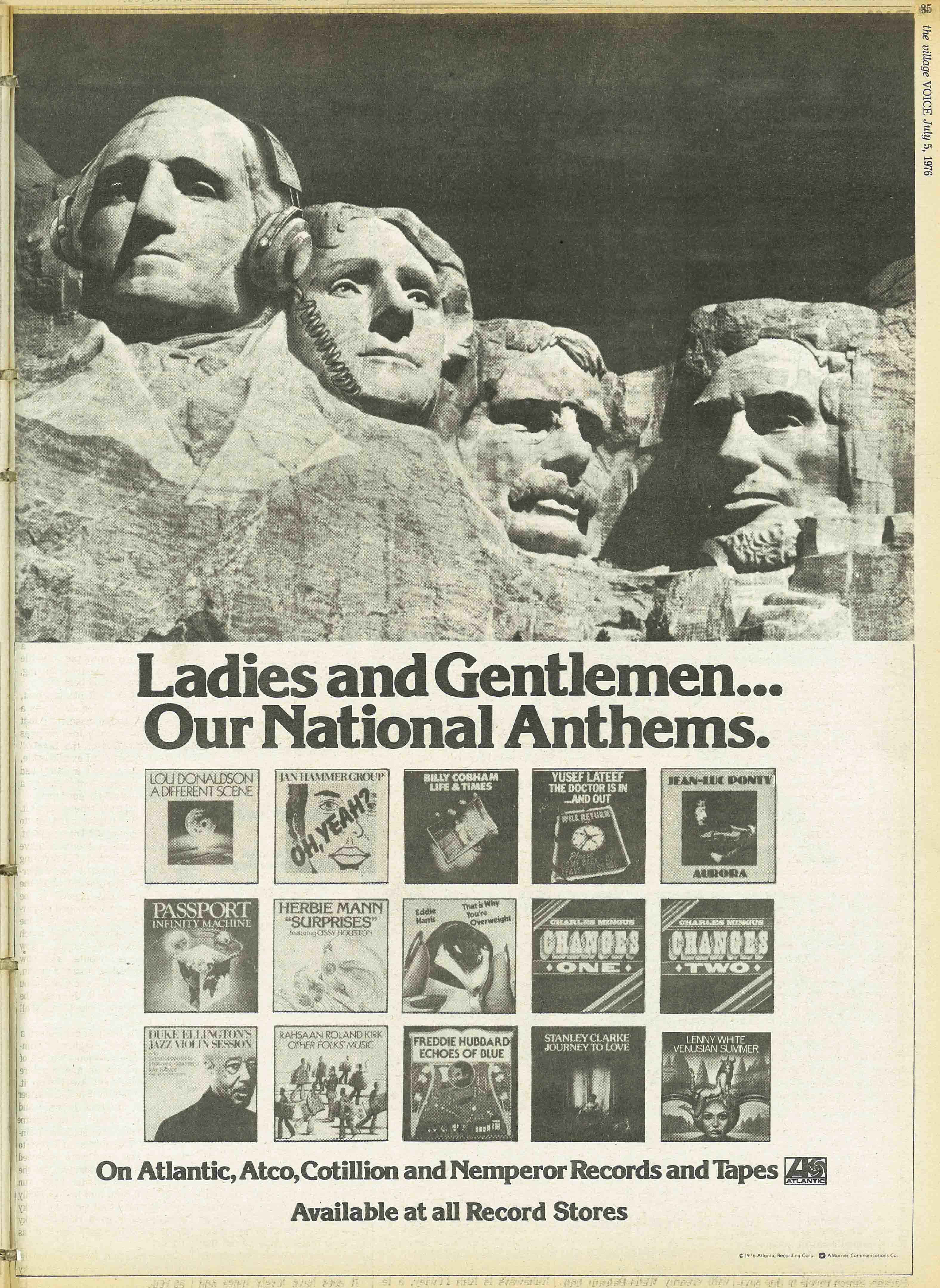 Jazz was more thoroughly homegrown, and the graphic-design team at Atlantic Records found a way to tie the music to America’s biggest political idols. (Although Richard Nixon played the piano in the White House, it would not be until 1992 that a presidential candidate would capture the spirit of Atlantic’s equating “cool” with American-born music. Bill Clinton wasn’t blowing jazz, but “Hound Dog” — a twelve-bar blues written by two Jews and first turned into a minor hit by a black female blues singer before becoming a monster chart-topper for the Southern white king of rock ’n’ roll, Elvis Presley — embodies an ethnic mix that represents American ideals at least as well as “The Star-Spangled Banner.”) 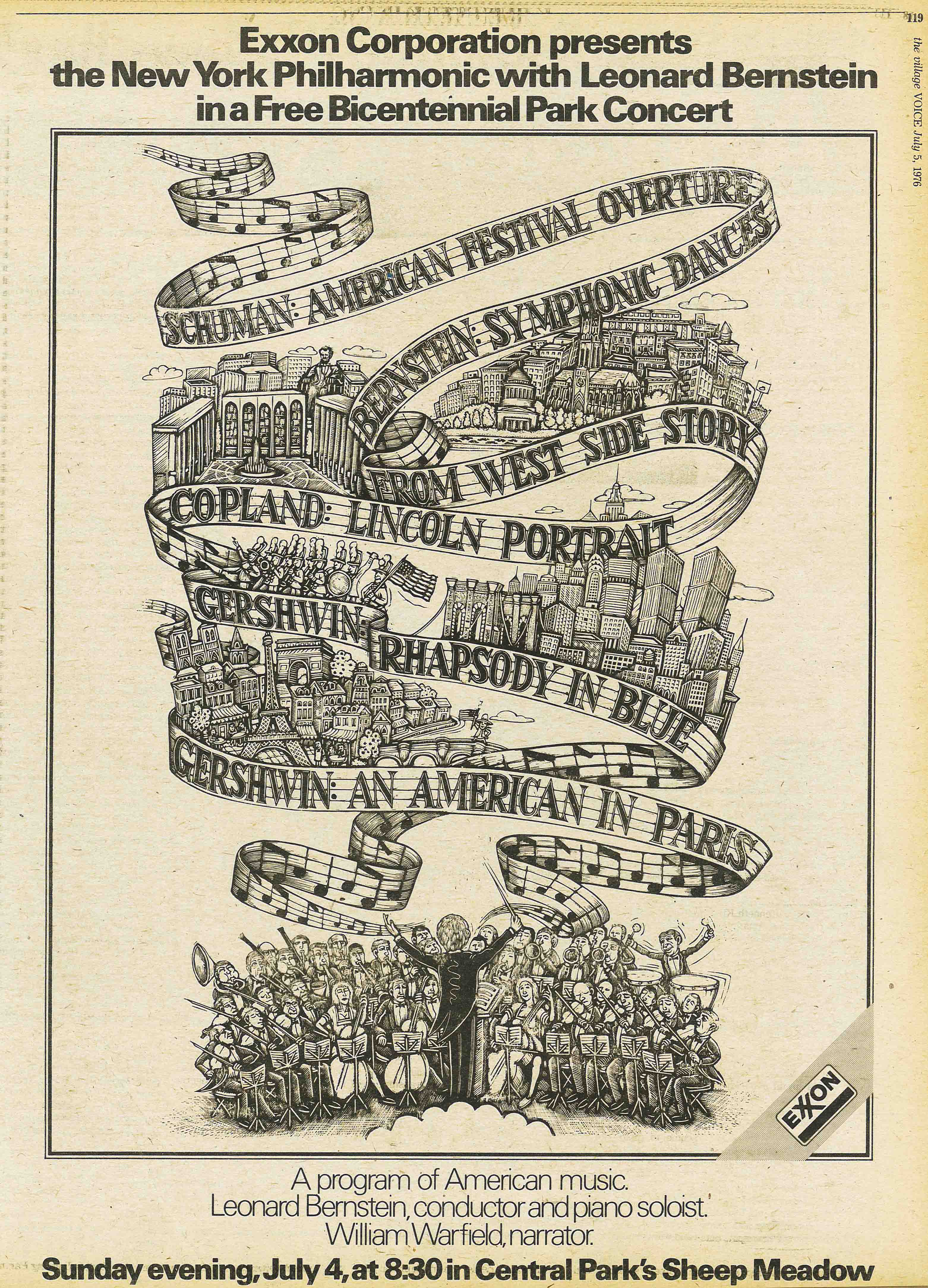 For those whose tastes ran to symphonic music, the Sheep Meadow in Central Park was the place to be, as America rang in 200 years of being “the last best hope of earth,” President Lincoln’s characterization of the country at the height of the Civil War, when Northern victory was far from certain. The Union survived, and in 1939 the Manhattan-born composer William Schuman wrote American Festival Overture, which he called music for “a very festive occasion.” New York Philharmonic conductor Leonard Bernstein took him at his word, and included the piece in a patriotic extravaganza. Also featured was Aaron Copland’s Lincoln Portrait, which incorporates text from a number of the Great Emancipator’s speeches, including these lines from an 1862 address to Congress, as the Civil War raged on: “The dogmas of the quiet past are inadequate to the stormy present. The occasion is piled high with difficulty and we must rise with the occasion. As our case is new, so we must think anew and act anew. We must disenthrall ourselves and then we shall save our country.” 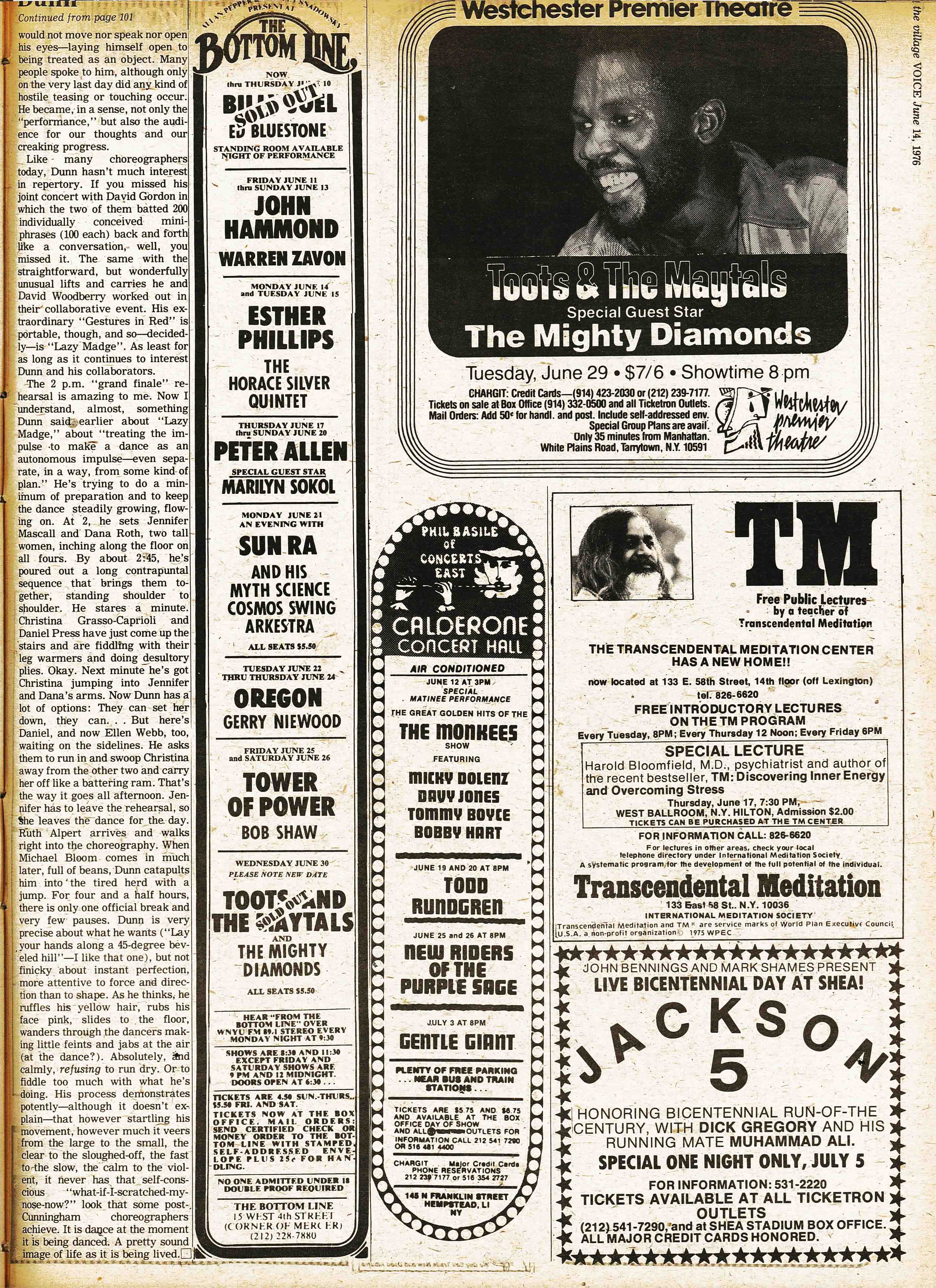 On the night after the Philharmonic spectacle, celebrators could really kick out the jams — at Shea Stadium. On July 5, 1976, you could hop the 7 train to see comedian Dick Gregory joined by his “running mate” Muhammad Ali, for the conclusion of his “Bicentennial Run Against Hunger in America.” Gregory, who was a long-distance runner, had run from Los Angeles to New York to “awaken a Sleeping America to the plight of the American people who remain poorly fed, poorly housed, and poorly clothed — while America basks in its glory of affluence and bounty.”

Oh, and the musical guests were the Jackson 5. 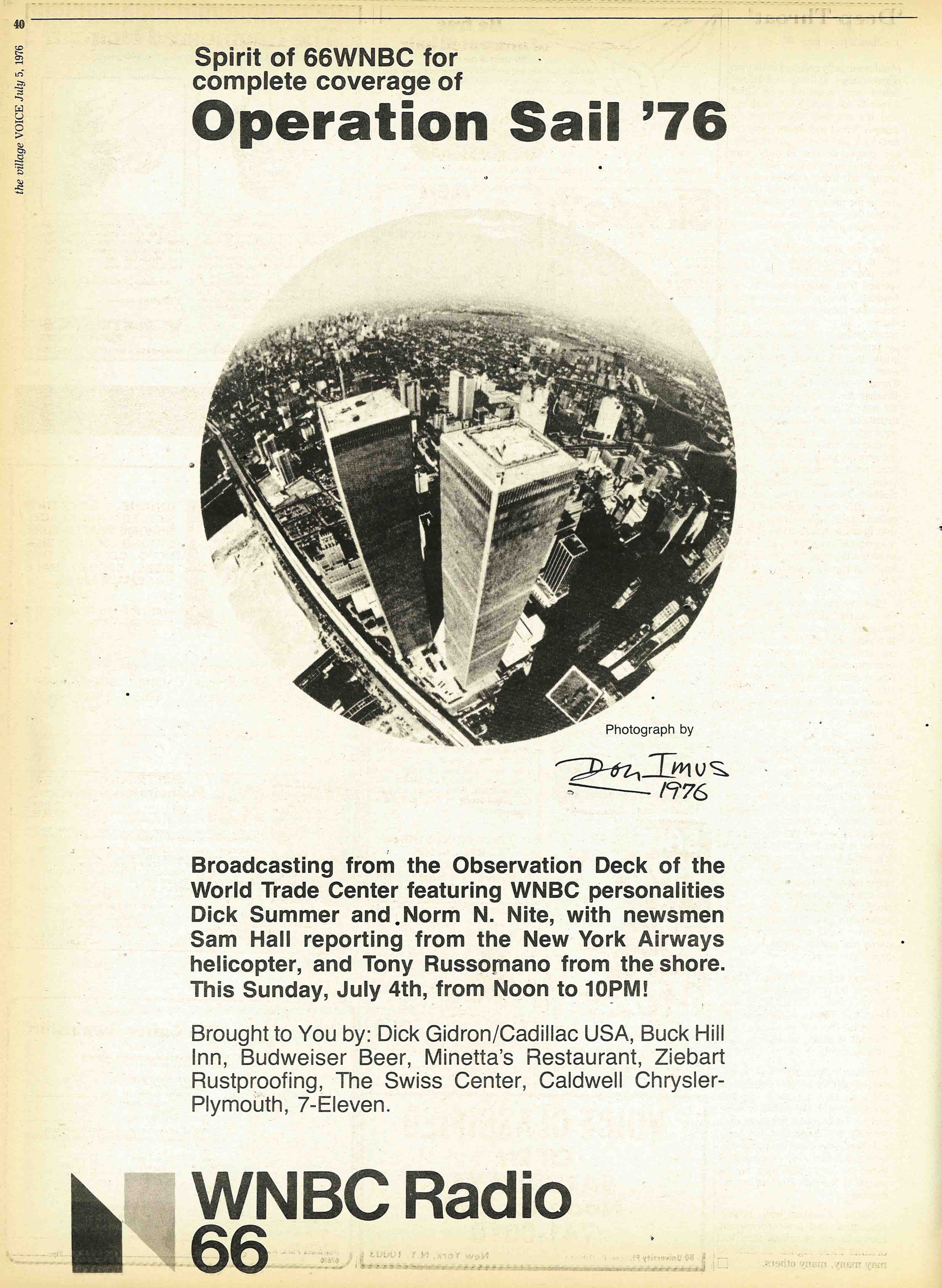 One of the nonmusical highlights of the Bicentennial was Operation Sail, which brought tall ships from around the world to New York Harbor. Radio personality Don Imus gave the World Trade Towers the fish-eye treatment from a traffic helicopter to welcome the international fleet. 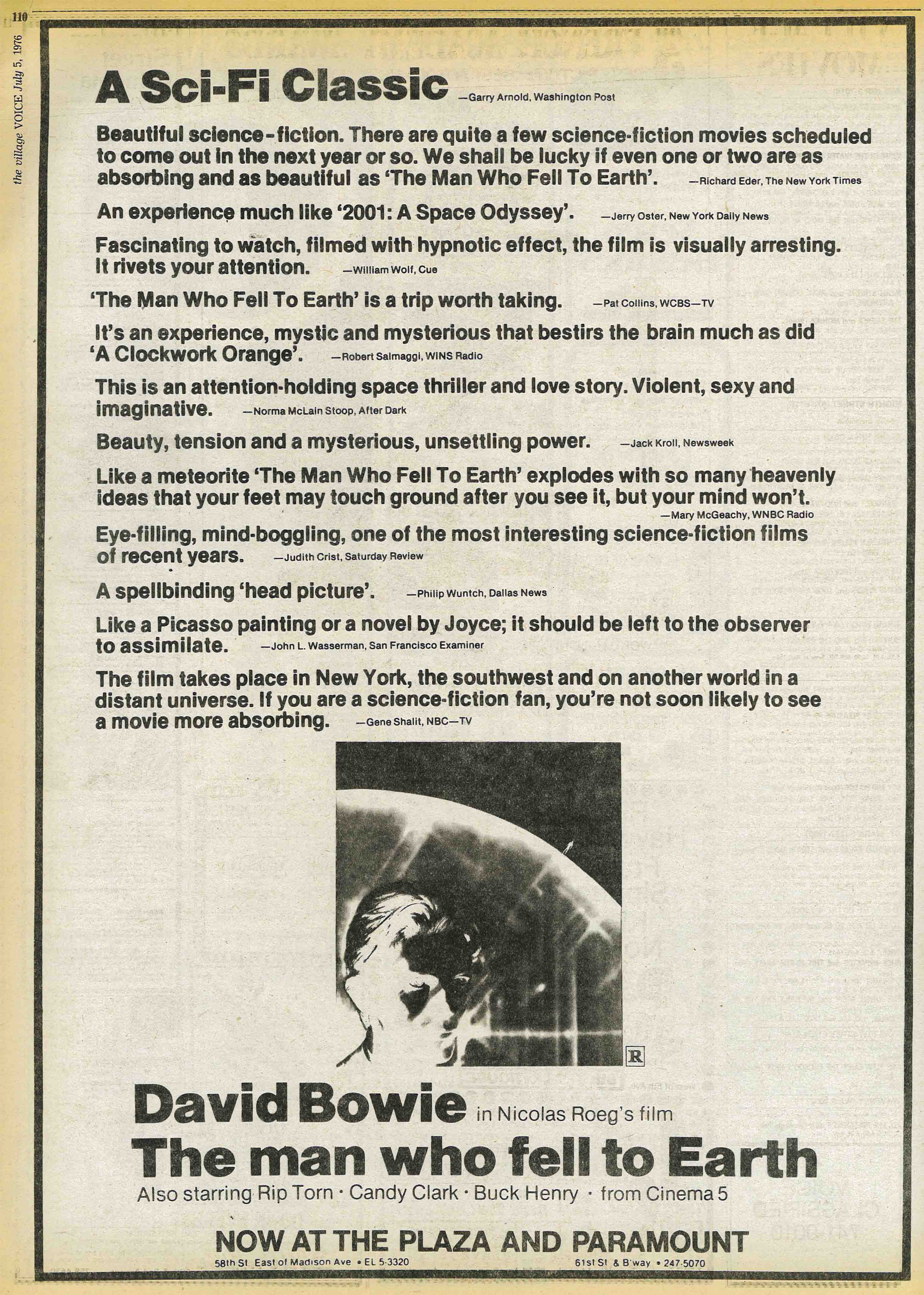 Those who wanted nothing to do with America’s big blowout could head for the movie theaters, where a major British rocker was starring in, as one critic described it, “a spellbinding ‘head picture.’ ” If that wasn’t enticement enough, another critic compared director Nicolas Roeg’s The Man Who Fell to Earth to “a Picasso painting or novel by Joyce; it should be left to the observer to assimilate.” 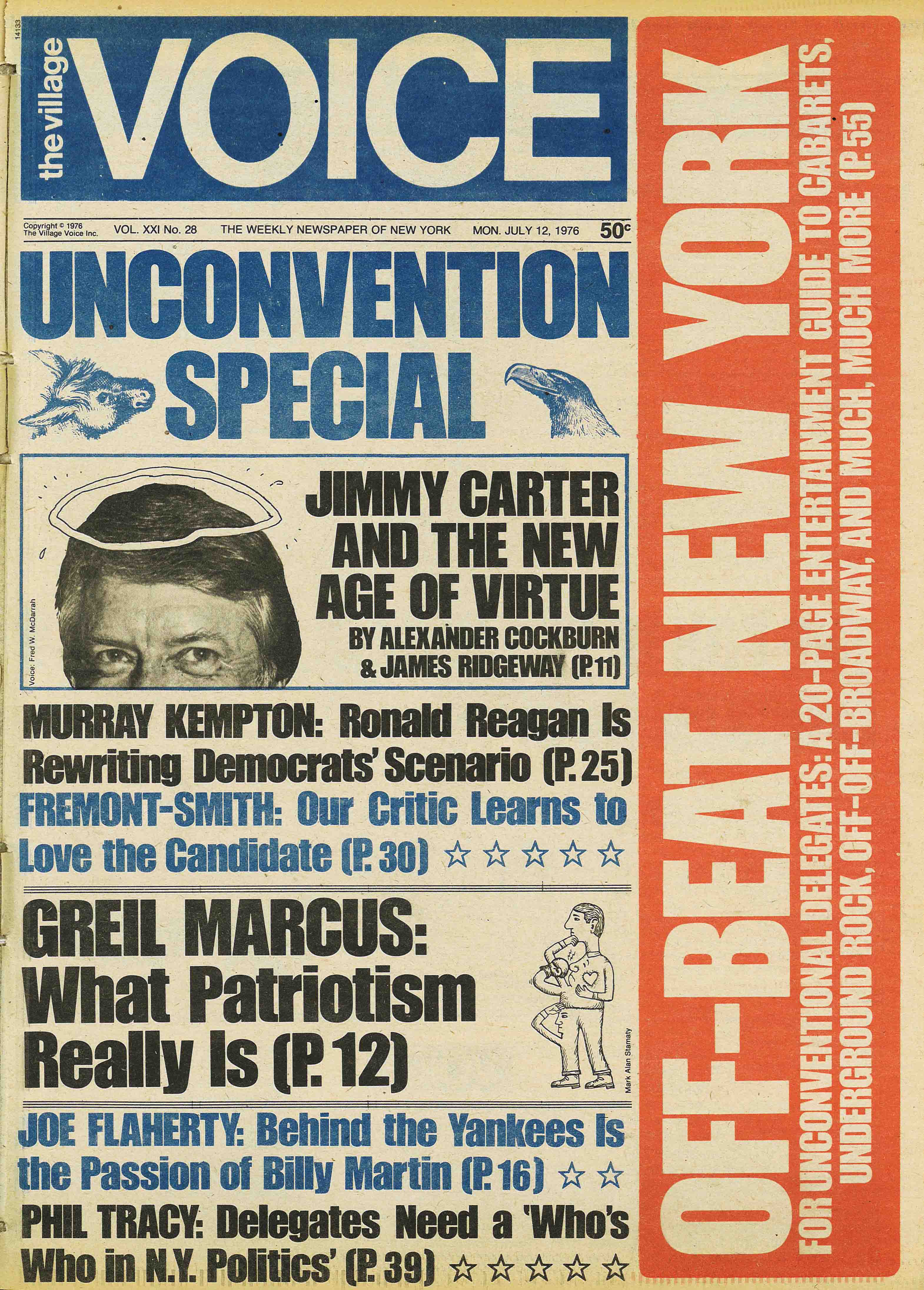 Once the Bicentennial was done, New York City had to prepare for the arrival of the Democrats who were anointing Jimmy Carter as their presidential candidate. The Democratic National Convention took place at Madison Square Garden from July 12 to July 15. Along with coverage of the Dems and an article on the ever-newsworthy Billy Martin, in his first full year as Yankees manager, the Voice cover teased an essay on patriotism by cultural surveyor Greil Marcus. 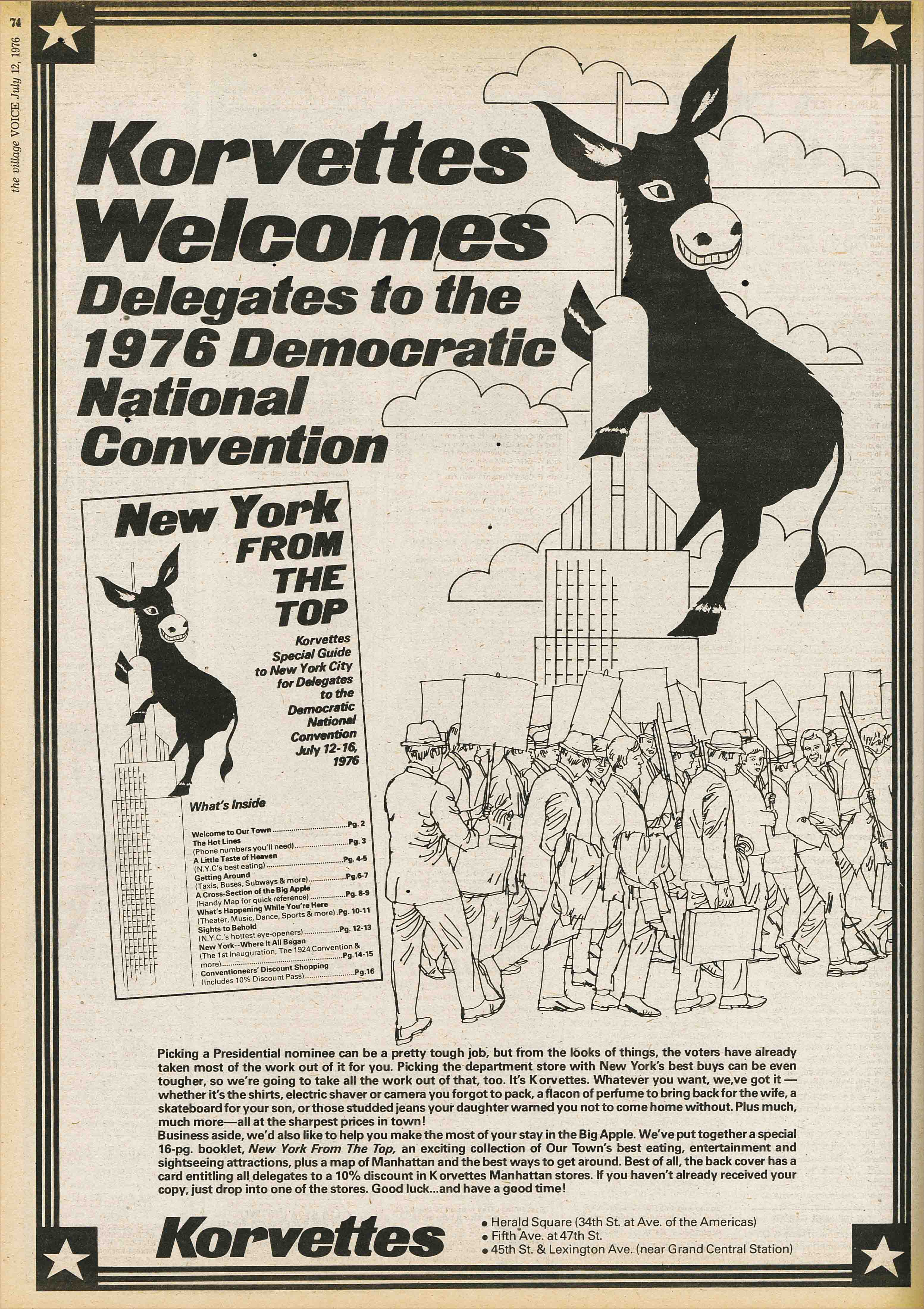 Korvettes department store was one of many New York City outlets offering convention visitors printed guides to local restaurants, nightlife, and tourist attractions. It was too late, however, for out-of-towners to have witnessed the second coming of a unique bit of Gotham’s fictional lore: the death of King Kong, this time falling not from the Empire State Building — as he had in the original 1933 film — but from the Twin Towers. According to the June 22, 1976, edition of the New York Times, “a horrified crowd of more than 5,000 New Yorkers surged past police lines at the World Trade Center last night on cue and fought its way to the spot where a giant gorilla lay dead after a 110-story fall from the North Tower.” The paper further reported that these unpaid extras had to stage their charge “again and again — and again,” because they were blocking the camera crew’s view of Jessica Lange, who was updating the role, made famous by Fay Wray, of the beauty who killed the beast.

It was certainly a mixed metaphor to have the symbol of the Democratic Party re-create that moment in an ad welcoming delegates. But Korvettes assured the visitors that, although finding gifts for those at home could be tougher than picking a candidate, they could confidently purchase “a flacon of perfume to bring back for the wife, a skateboard for your son, or those studded jeans your daughter warned you not to come home without.” Welcome to the big city. 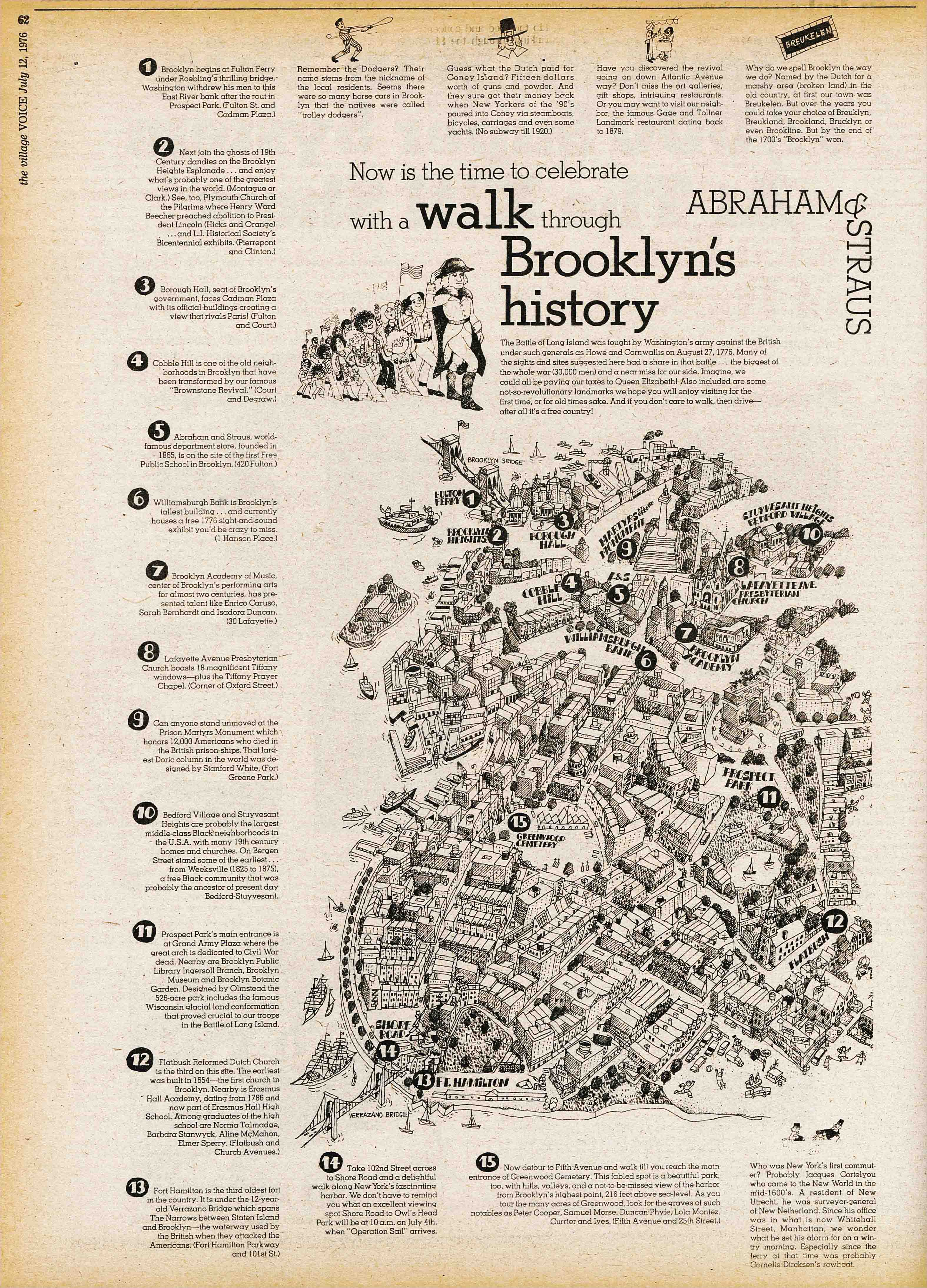 Brooklyn retailer Abraham & Straus sought to lure conventioneers across the East River by appealing to their patriotism, with ad copy that read, “The Battle of Long Island was fought by Washington’s army against the British under such generals as Howe and Cornwallis on August 27, 1776,” and then promised, “Many of the sights and sites suggested here had a share in that battle.”

And here’s a closer look at A&S’s nifty outerborough map: 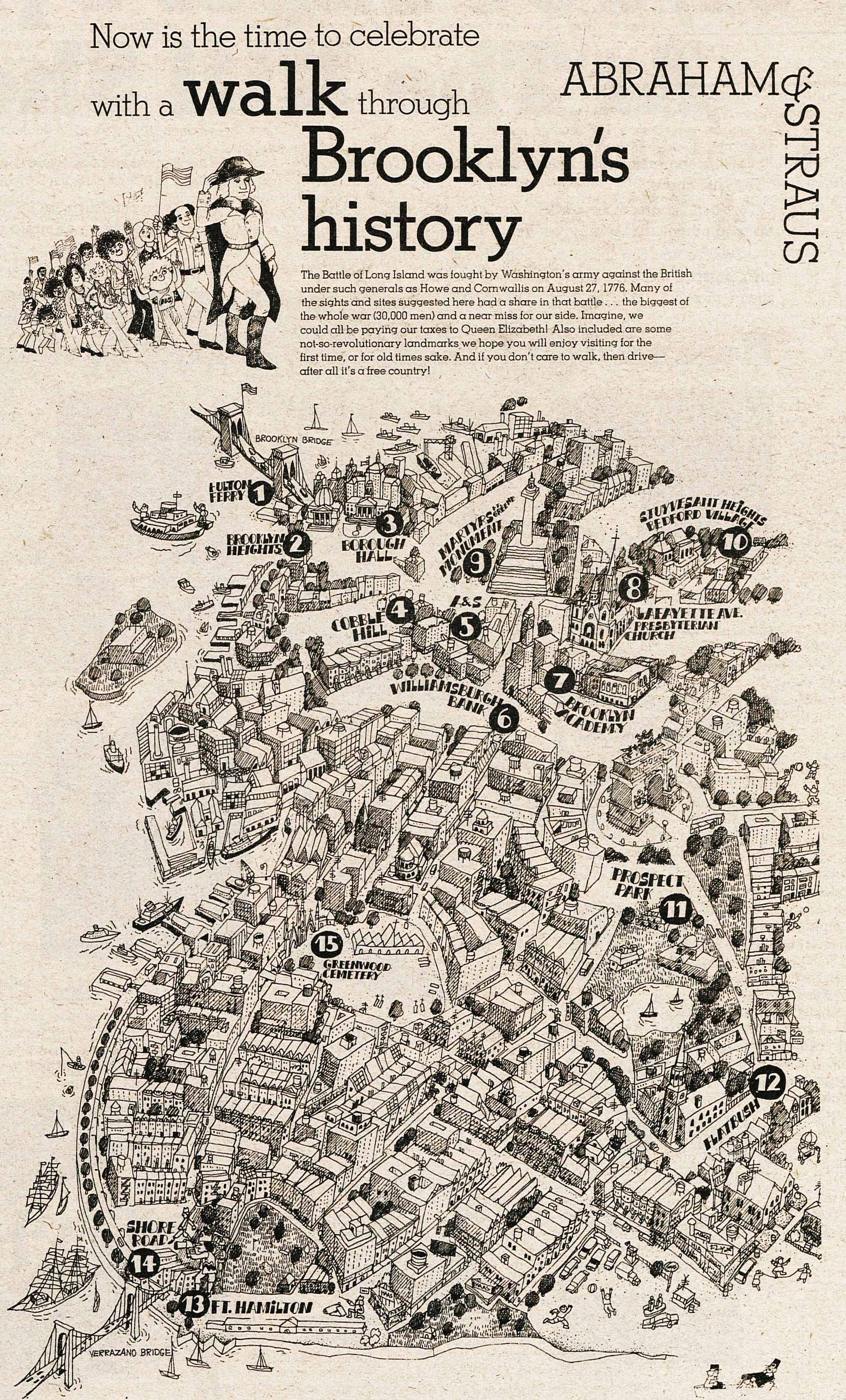 And finally, what would the Bicentennial have been without a reference to the Watergate scandal, which proved that democracy is bigger than those who seek to undermine it. In an ad for a comedy record by the comedians Burns and Schreiber, “that great iconoclast from Baltimore,” who we assume to be H.L. Mencken, is quoted: “It is the duty of the satirist to be outrageous and to offend. It is the duty of the government to be responsible.”

Those were the days! 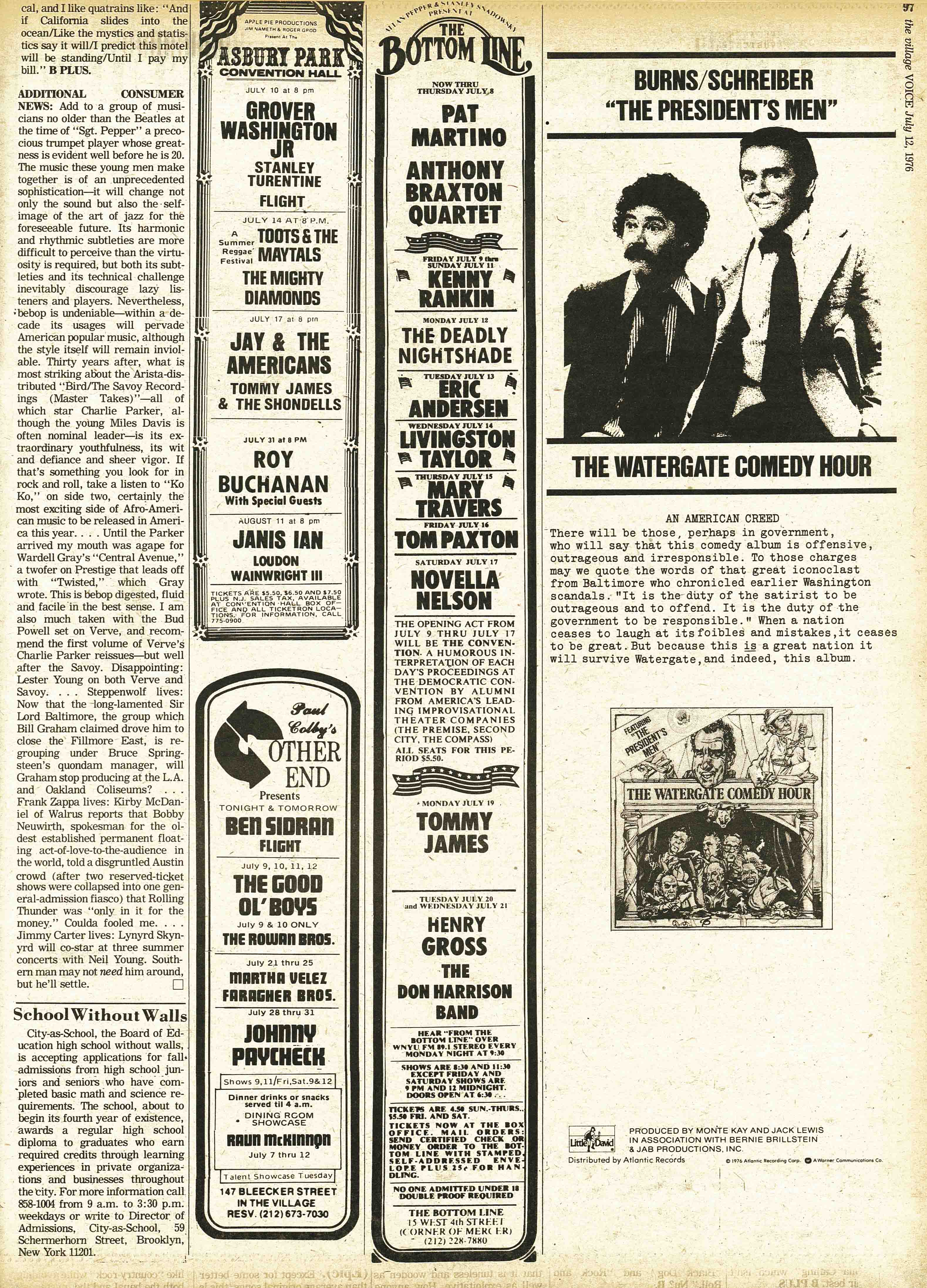