“Ludwig, you are the favorite of the Lord because more than any other man, you are exposed to sin.” A compassionate priest says this to the mad king of Bavaria about halfway through Ludwig, Luchino Visconti’s sprawling 1973 film, which is being given a weeklong rerelease at the Film Society of Lincoln Center, as part of its broader Visconti retrospective. You could take the priest’s statement and replace either “the Lord” or “Ludwig” with “Visconti,” that most godlike of directors — a towering figure who exerted total control over his impeccably lovely frames. But he was also a complicated man who clearly identified with Ludwig’s extravagance, his obsession with opera, his lightly hidden homosexuality, his flaunting of tradition. Visconti loved contradictory, tormented characters, who seemed to reflect his own angst back at him.

The heir to a long line of Italian nobility, Visconti was a Marxist filmmaker who never gave up on his aristocratic tastes; as the years passed, he seemed to retreat further into his sets, mounting elaborate historical spectacles. Ludwig, related to a long line of European monarchs, turned away from the business of politics and war and imperial strategizing to hole up in his castles, losing himself in a world of art and music, theater and make-believe, turning his subjects into playthings. Of course, Visconti never went as far as Ludwig — his films remained politically complex, often speaking to their era. But you can sense him resisting the urge to disappear into these decadent cinematic dioramas. For the director, the story of this obsessive, disgraced monarch is both a fantasy and a cautionary tale.

Ludwig was one of Visconti’s most ambitious films — the final part of his so-called German Trilogy. The previous titles, The Damned and Death in Venice, had been international hits, but this one would prove to be among the director’s least critically and financially successful works. This restored new 35mm print runs 238 minutes, but initially Ludwig was released only in butchered versions in the U.S. (173 minutes) and the U.K. (137 minutes). Critics were largely perplexed by its slow pace, its talkiness, its lack of those Viscontian virtues of spectacle and melodrama. A more complete version emerged only in the early 1980s, after the director’s death.

The full version of Ludwig is even more deliberately paced than those earlier cuts, with all the solemn solitude of a chamber drama. Gone is the hysteria of The Damned or the insistent lyricism of Death in Venice. This is Visconti’s coolest, most ruminative film. Structured around various individuals — doctors, politicians, functionaries — relating their experiences with (and, in some cases, offering up their analyses of) the monarch, Ludwig recalls an autopsy or an exhumation; it even ends on a haunting freeze-frame of the king’s dead body, as he’s dredged up from the lake where he’s drowned. It’s a haunting moment, but not a startling one: The shadow of death seems to hang over the entire movie.

The first half mostly follows Ludwig (played with wide-eyed fervor by Helmut Berger, Visconti’s lover at the time) as he obsesses over his cousin, Princess Elisabeth of Austria (Romy Schneider, who had played the same character as a teenager in a series of family-friendly films following the young princess’ fictional adventures). Elisabeth adores him, but she also seems to understand even better than he does that they could never be together. Later, Ludwig reluctantly agrees to marry a fellow aristocrat, Sophie (Sonia Petrova), at the request of his family. He also goes through various machinations to bring German composer Richard Wagner (played by Trevor Howard) to Bavaria.

The world had rejected the famously profligate and temperamental Wagner, but Ludwig worships the man’s genius and is willing to do anything for his art, including building him an opera house in Bayreuth. For all that, there’s also an emotional paralysis to these early scenes, as if the film has absorbed Ludwig’s inability to express his true desires. Very early on, we see his coronation, but Visconti mostly confines us to an interior room along with the young king as attendants and visitors step in and out and celebratory music plays somewhere in the distance. Later, we only hear of Wagner’s accomplishments: We never see Bayreuth or his triumphant premieres. Built mostly around medium close-ups and dark interiors, the film creates a sense of isolation that matches the lead character’s own state of mind.

There are brief moments of sublime beauty, however, as Ludwig builds his castles, courts handsome young men, and begins to look for something approaching love. At one point, Ludwig summons an actor he’s become obsessed with to his famous man-made Grotto of Venus, an underground lake with artificial waterfalls and special lighting and piped-in music, where the king arrives on a cockleshell-shaped boat, imagining himself to be a Wagnerian hero. It’s a ridiculous moment — Ludwig already has long appeared to be a man possessed — but it’s also oddly touching. Isn’t he also a film director avant la lettre — a man who has created an elaborate, possibly mad spectacle, and has then lost himself in it? 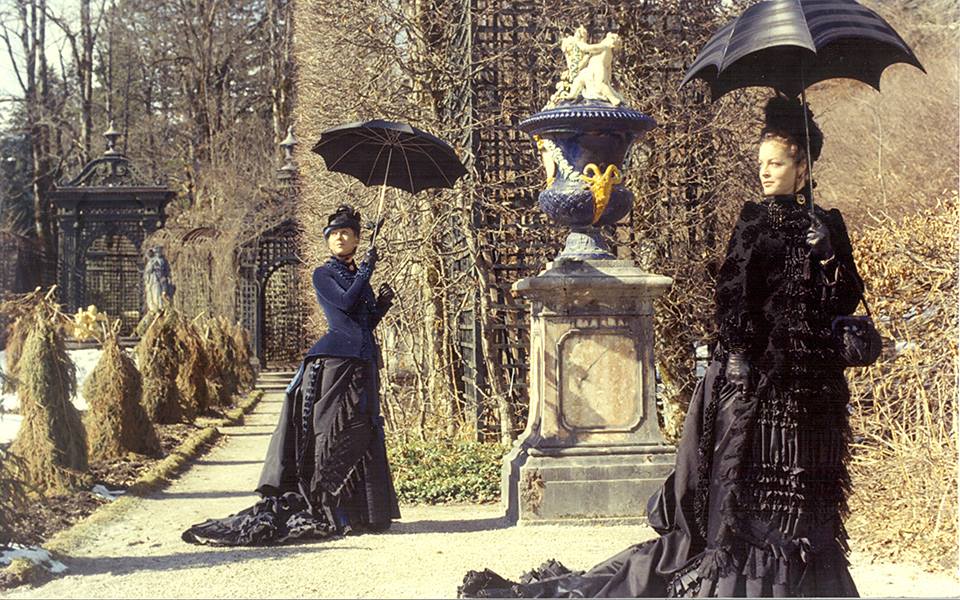 Visconti’s project was, in a sense, an act of reclamation. This king was seen for decades as a pathetic disgrace, a failed statesman whose failing sanity cost his nation dearly. He had effectively ceded power over Bavaria, wanting nothing to do with the unified Germany rising around him, a new power driven by Prussian expansion and diplomatic realpolitik — the forces that would culminate in Nazism. In Visconti’s eyes, Ludwig is the end point of German romanticism, a symbol of a path not taken. (His approach differs significantly from the German director Hans-Jürgen Syberberg, who also made a film about the king in 1972; for Syberberg, Ludwig and German romanticism were early expressions of the same impulse that would eventually bring Hitler to power.)

There is one scene in Ludwig that I’ve never been able to shake, and it feels different every time I see this beautiful, hypnotic movie. It comes late in the film, as Elisabeth comes to visit Ludwig in one of his castles. The paranoid king refuses to see her. She walks around the grounds as we are treated to ten minutes of Romy Schneider silently touring this ornate, massive palace at Herrenchiemsee, shot on location. At the sight of a Versailles-like hall of mirrors, she begins to laugh uncontrollably, her cackles echoing in the vast emptiness of the room. Is this mockery or defiance? Is she guffawing at Ludwig’s insanity? Or is she gleefully admiring the fact that, as the old world collapses around him, this mad king has dared to dream not of war and empire and power, but of otherworldly beauty? The question hangs tantalizingly in the air.