The June 6, 1968, issue of the Village Voice reported on the shooting of Andy Warhol by a disgruntled wannabe playwright, which took place on June 3. Media moved at a slower pace back then, and so there is no mention in the Voice that the madness of the times had also once again caught up with the Kennedys — Bobby had been shot early on the morning of June 5 in Los Angeles, after winning the California primary. By the Voice cover date of June 6, RFK had already died from his wounds. But on the back page of the paper, the candidate is still alive — as his canvassers prepared for the June 18 New York primary contest. 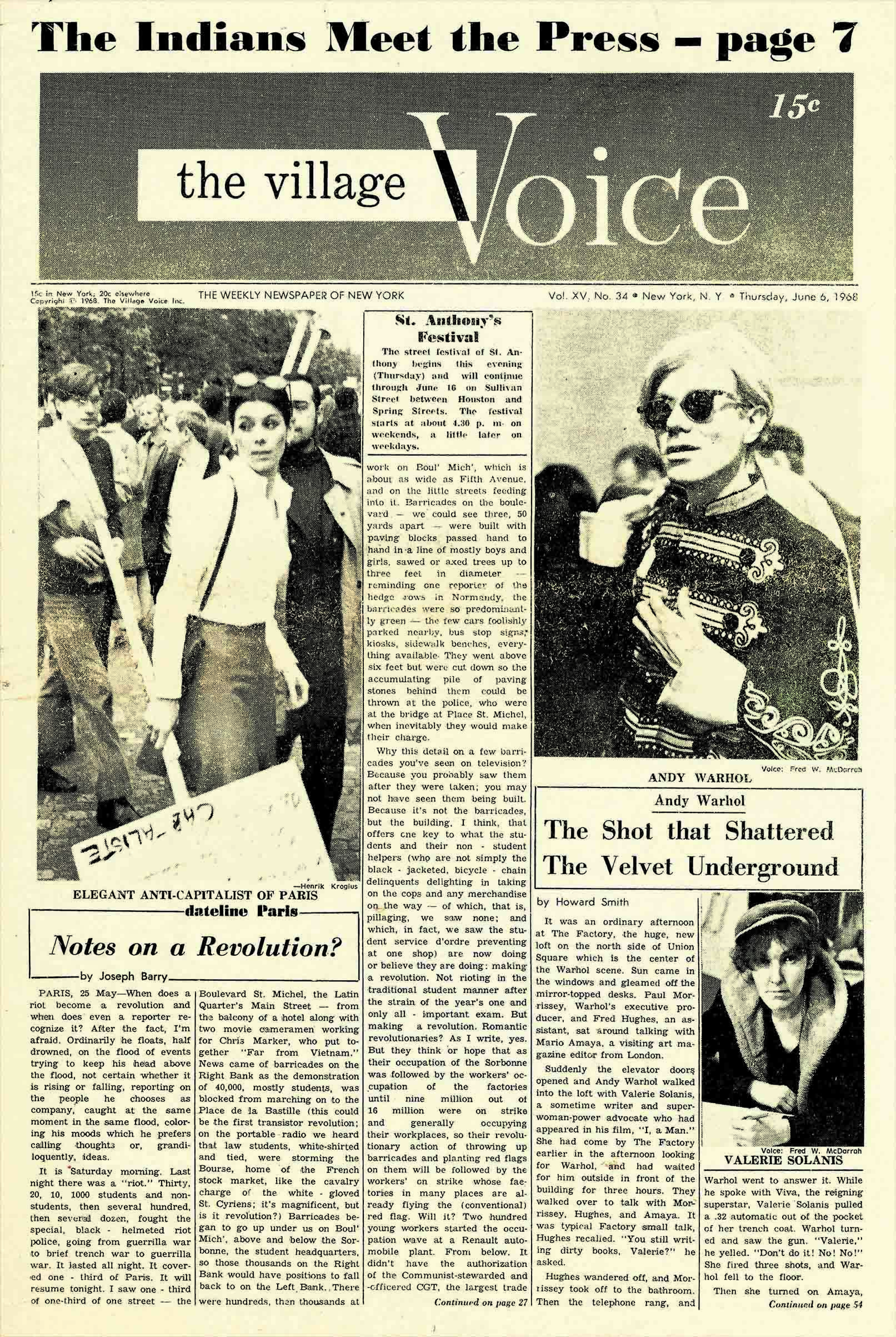 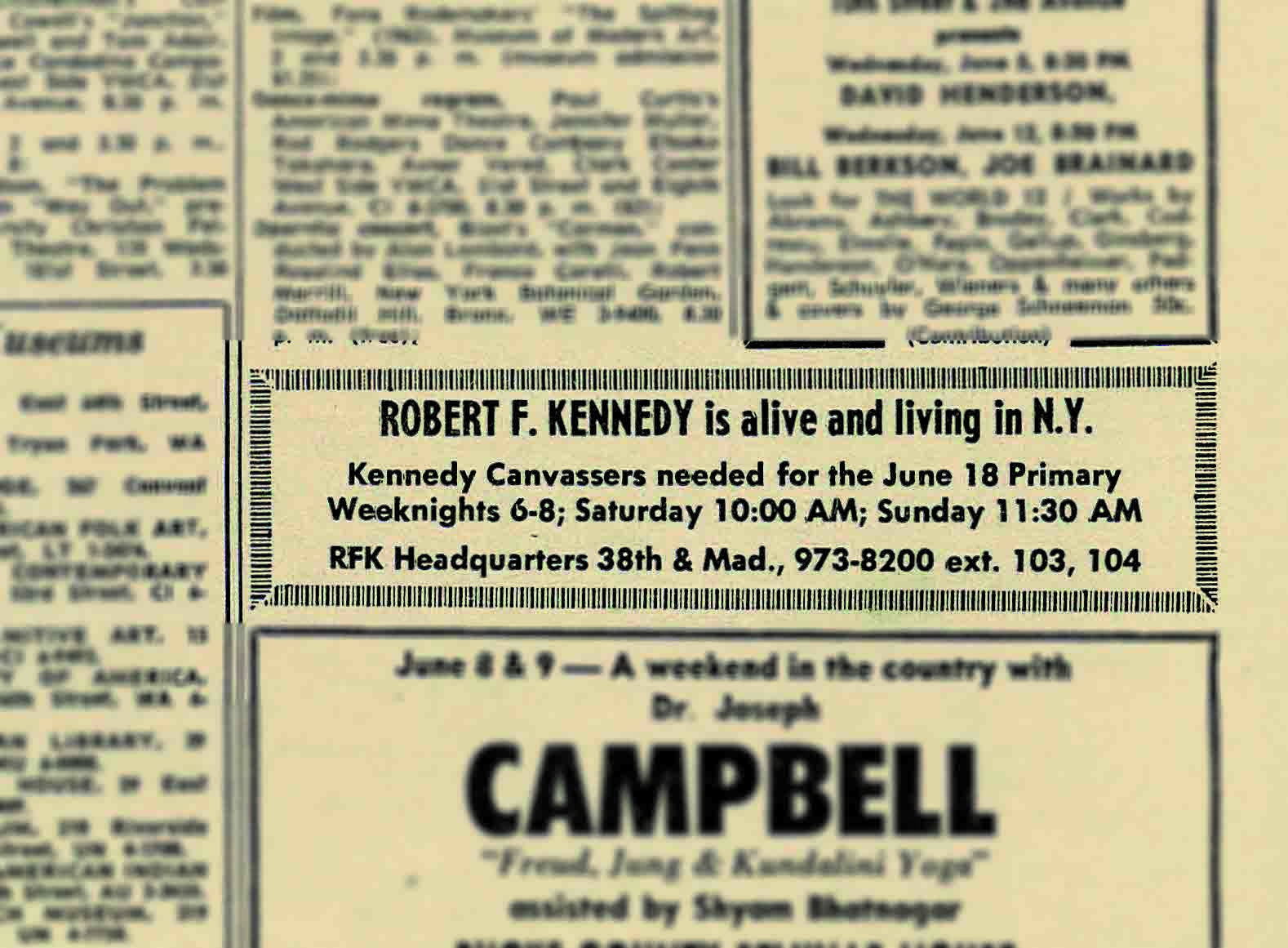 What if Kennedy had survived and Warhol had died? We wouldn’t have the artist’s late, great “Shadows” series, but how different would America’s political and social history be? Richard Nixon, who had lost the presidency to Bobby’s brother John in 1960, would go on to defeat Hubert Humphrey by a razor-thin margin, in 1968. Could the underhanded Republican have beaten the surging RFK? On March 22, shortly after entering the presidential race, Bobby told students at Vanderbilt University, “Richard Nixon represents the dark side of the American spirit.” And indeed, the famously paranoid president would prove Kennedy right when he resigned in disgrace, in 1974 — but not before he had managed to sow more tribal hatreds across the land with his divisive racial policies and secret escalations of the Vietnam War.

Mailer had been correct in his hope, back in 1964, that the notoriously ruthless and pragmatic RFK might be capable of growth and change. In the documentary The Sixties — The Years That Shaped a Generation, Frank Mankiewicz, an aide to RFK, tells this story: “I think one thing that happened to him was that his brother was murdered. I think that had a profound impact on him. On an airplane during the campaign, someone asked him — may have been Jack Newfield — ‘What’s your position on capital punishment?’ And he said, ‘I’m against it.’ And whoever it was said, ‘When you were at the Justice Department that wasn’t your position, when you were attorney general.’ And he said, ‘Well, then I hadn’t read Camus.’ ”

It is the rare American politician who cites a French journalist/philosopher/novelist as a powerful influence on his thinking.

Along with the rest of the nation, the Voice mourned Kennedy’s passing, not least with a beautiful, elegiac portrait of RFK that staff photographer Fred McDarrah had taken on the Lower East Side a few months earlier. Both Pete Hamill and Jack Newfield reported from the scene of the assassination. 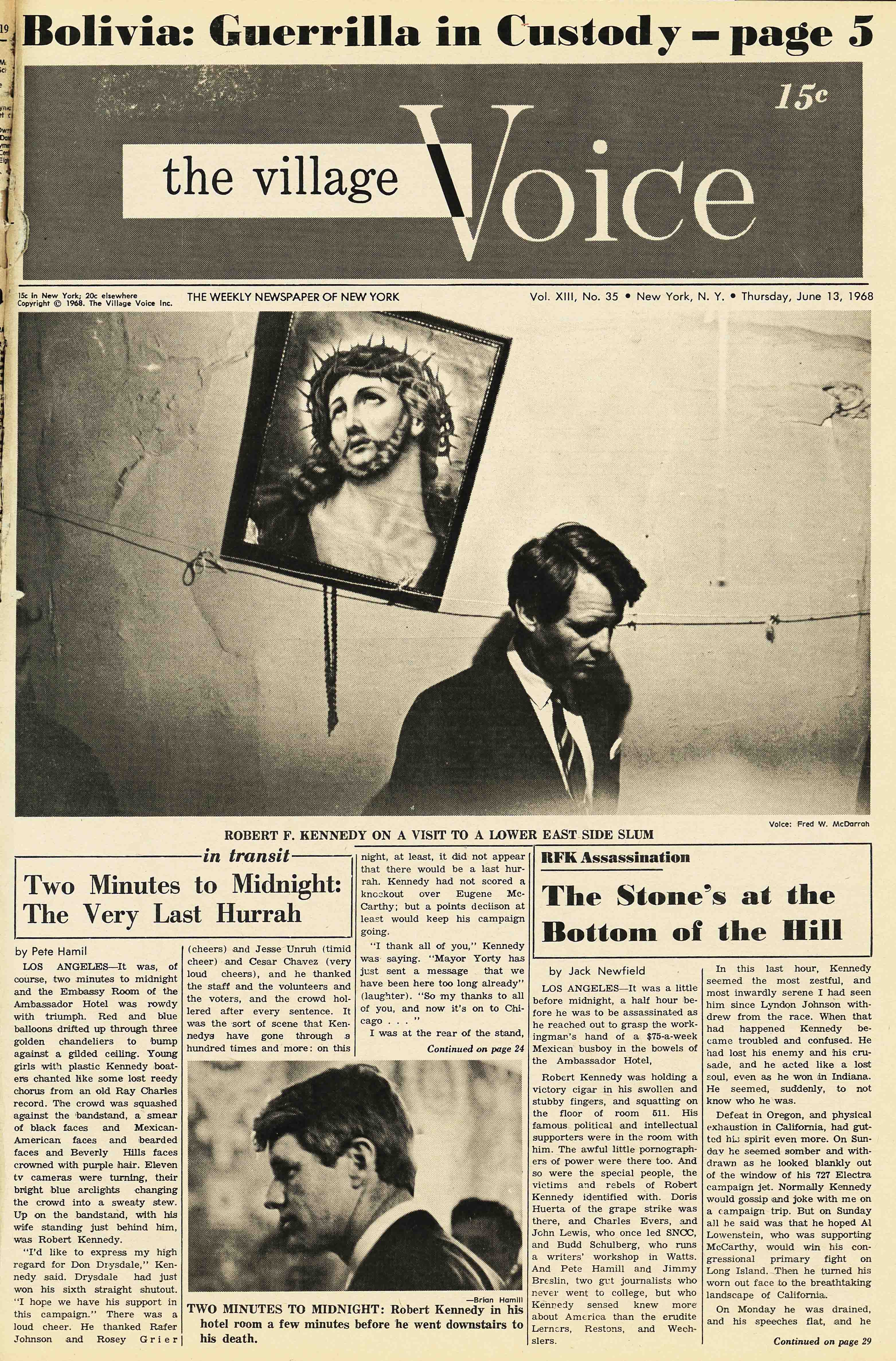 Newfield wrote of his memories of the campaign: “Kennedy quietly reading the Old Testament as a private gesture of irreverence all through the three-hour funeral mass for Cardinal Spellman. Kennedy sitting in his Manhattan apartment and reading me a poem from Emerson. Kennedy visiting a migrant worker camp near Buffalo, and walking right past the manager who held a gun, and into a rotting trailer that was home for 10 migrants. Kennedy pausing while campaigning in Brooklyn in front of a small girl with glasses and suddenly saying, ‘My little girl wears glasses too. And I love her very much.’ Kennedy visiting a hospital for retarded children in Westchester last January, and impulsively taking 16 patients for a ride to buy ice cream, while doctors and aides panicked. If I had written these things two weeks ago, The Voice would have been deluged with letters calling me a whore. Now such anecdotes fill the papers and the networks, and no one doubts them.”

Newfield concluded on a note of tremendous sadness, describing the funeral train that carried RFK’s body from New York to Washington, D.C. “Robert Kennedy was not a saint. He was a politician who could talk about law and order in Indiana. But anyone who rode on his funeral train last Saturday, and looked out at the rows of wounded black faces that lingered on the poor side of the tracks, knew what might have been. The stone is once again at the bottom of the hill and we are alone.”

Hamill was much angrier:

All those people in New York who hated Kennedy’s guts, who said “eccch” when his name was mentioned, the ones who creamed over Murray Kempton’s vicious diatribes these past few months: they were the same. When Evers died, when King died, when Jack Kennedy died, all the bland pundits said that some good would come of it in some way, that the nation would go through a catharsis, that somehow the bitterness, the hatred, the bigotry, the evil of racism, the glib violence would be erased. That was bullshit. We will have our four-day televised orgy of remorse about Robert Kennedy and then it will be business as usual. 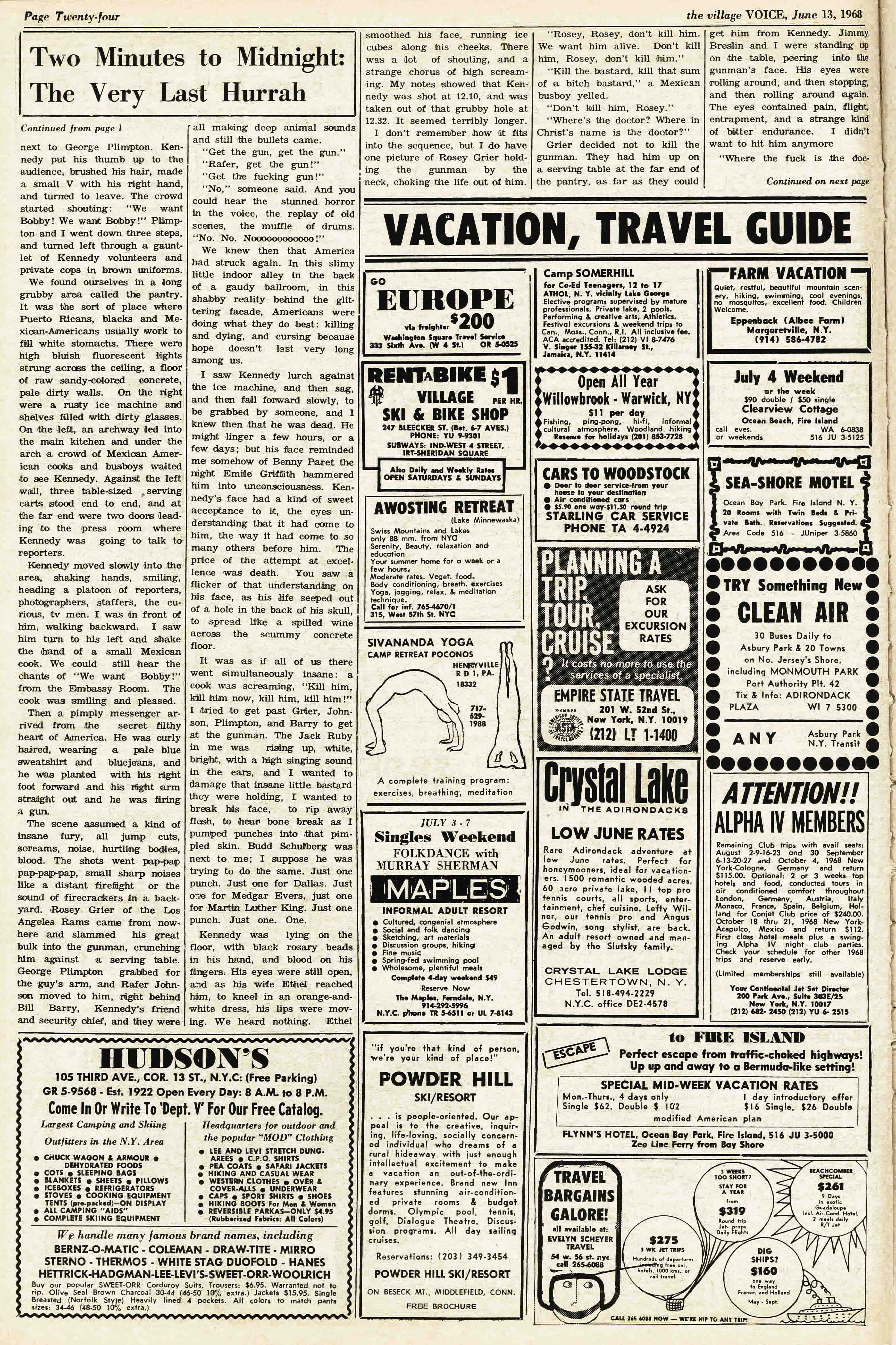 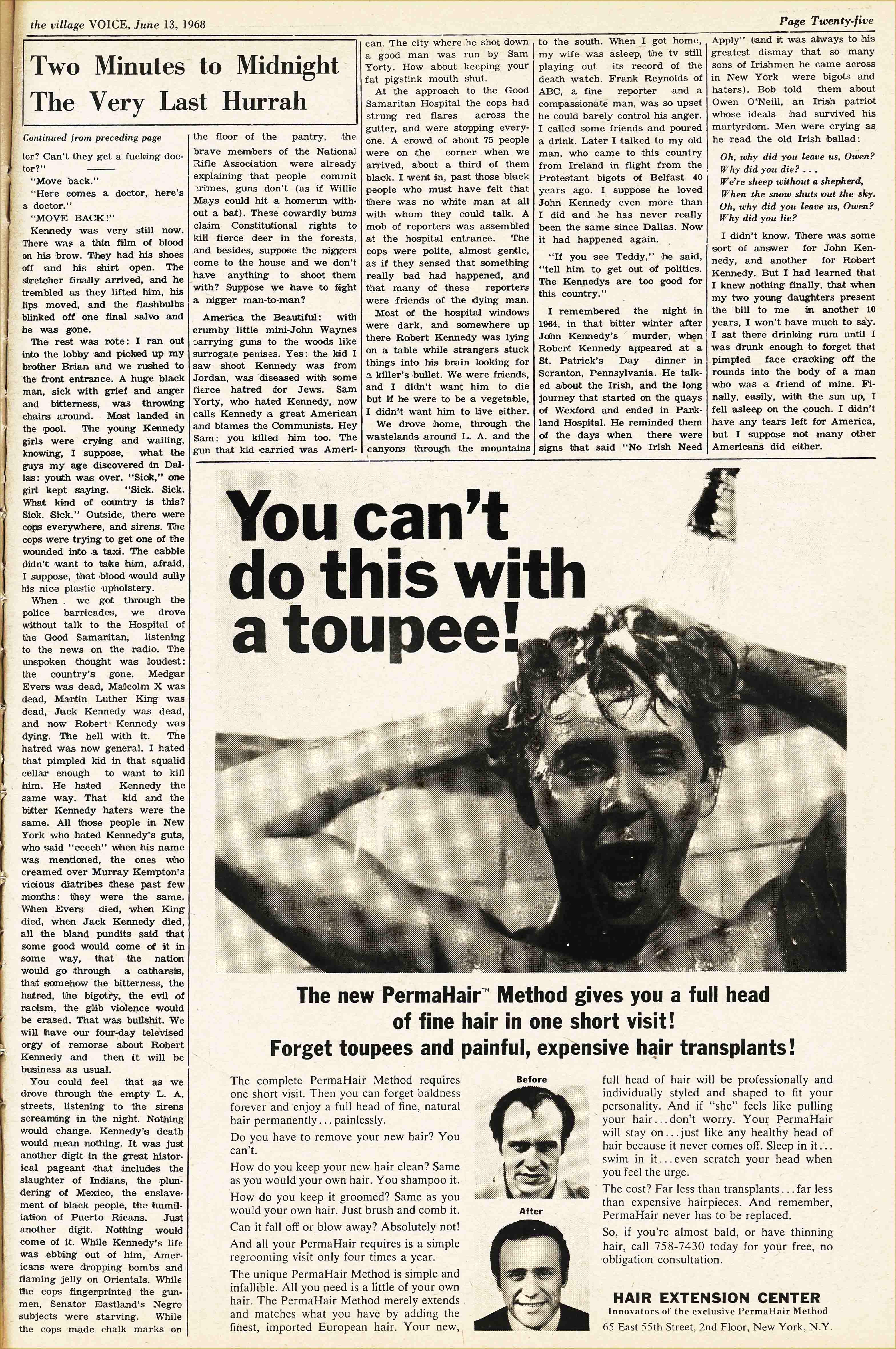 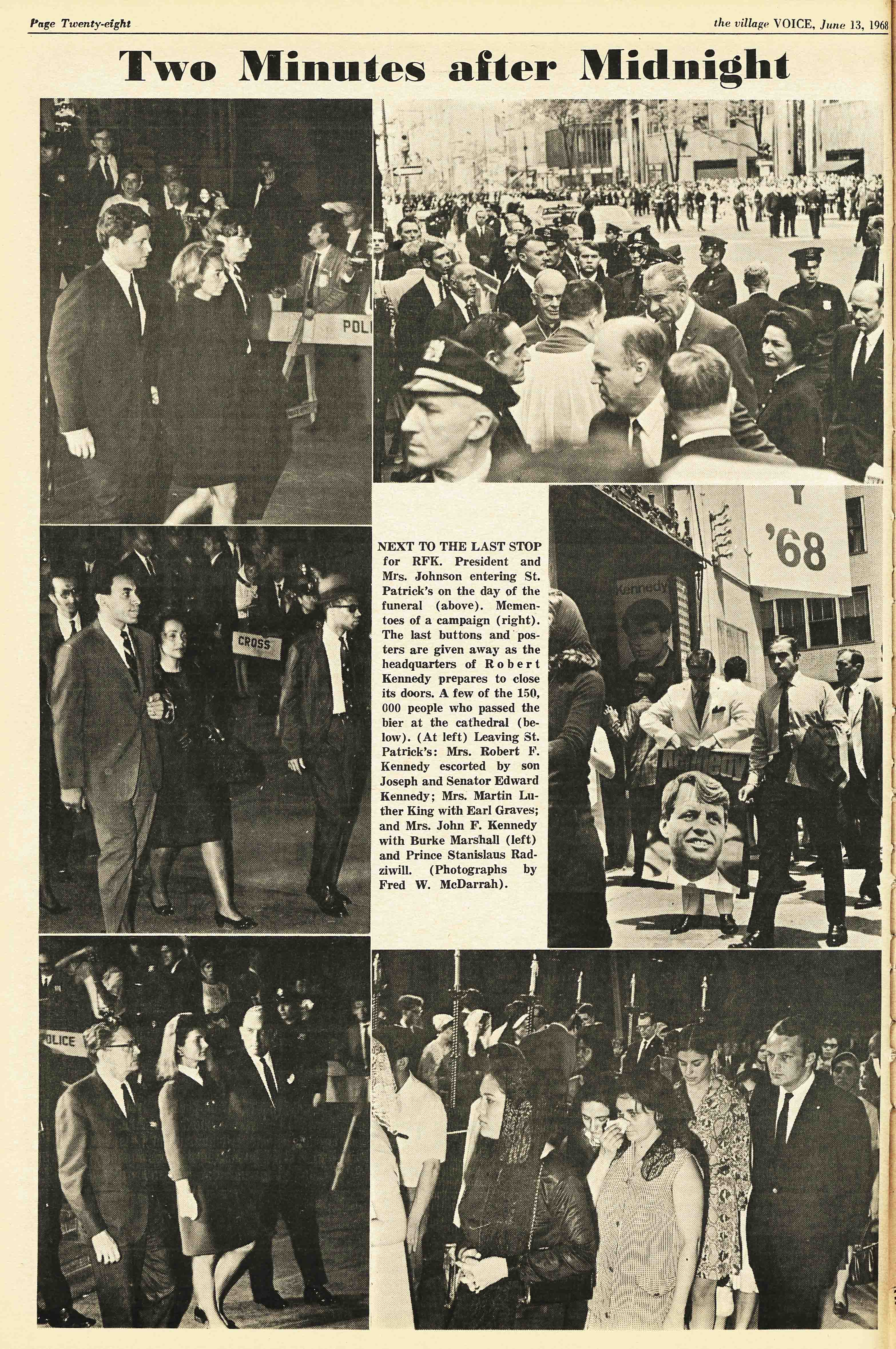 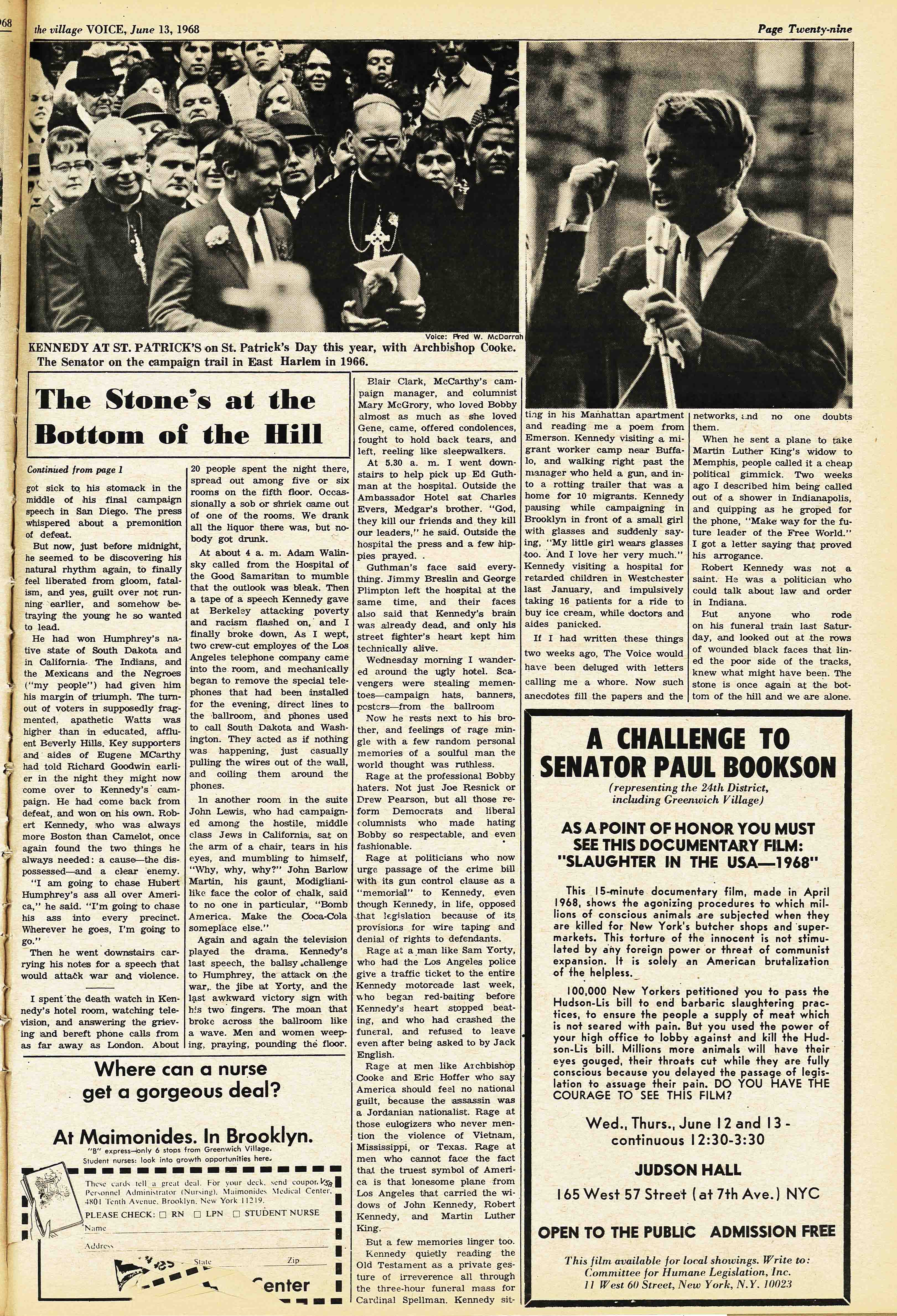 The Voice’s on-the-spot reporting of RFK’s campaign — Hamill was just a few feet away from Bobby when the assassin fired the shots — accomplished journalism’s mandate to be the first draft of history. Now we can look back on RFK as a comet of hope, a brief blaze of what might have been. Maybe 1968 could have been a time when the divisions in America began to be bridged, rather than hacked more permanently into the landscape by Nixon and his henchmen. It is the saddest of golden anniversaries, and we must face the fact that things turned out the way they did. But we are still fortunate to be here, alive in the current moment, though it’s one that holds at least as many dangers to democracy and decency as in Bobby Kennedy’s time. If his legacy is to mean anything, we must pick up the promises he represented and continue the arduous work of making them come true.

To read about the Voice’s coverage of Robert Kennedy prior to his assassination, click here.