Throughout the 1960s, the Village Voice, like much of the American media, was fascinated by the Kennedy family. In a sense, the paper’s coverage of Robert F. Kennedy began with an endorsement of his brother John for president, in 1960: “The somnolent 1950’s will come to an end next week. We slept through them almost to the point of the Big Sleep, and when we were not dormant we frittered away our energies and let others steal our liberties in the most mirthless decade of them all. We assume that the election of John F. Kennedy, whom we support without reservation, will bring the decade to an end.… It never seemed credible to us, even from the beginning, that [Richard] Nixon, the Abominable No Man of our generation, could attain the Presidency.”

Norman Mailer, one of the founders of the Voice, had angrily quit writing for the paper some four years earlier, after his phrase “the nuances of growth” had been mistakenly changed to “the nuisances of growth.” The novelist, already upset with previous “grievous” typesetting errors, used some “fairly sharp words” with his editors: “Certain things were said which can hardly be unsaid.” However, he retained an ownership stake in the paper, and one can imagine the evocative imagery of the endorsement (below) coming at least in part from his pen. In any case, Mailer would in future years write about both Kennedy brothers for the Voice. 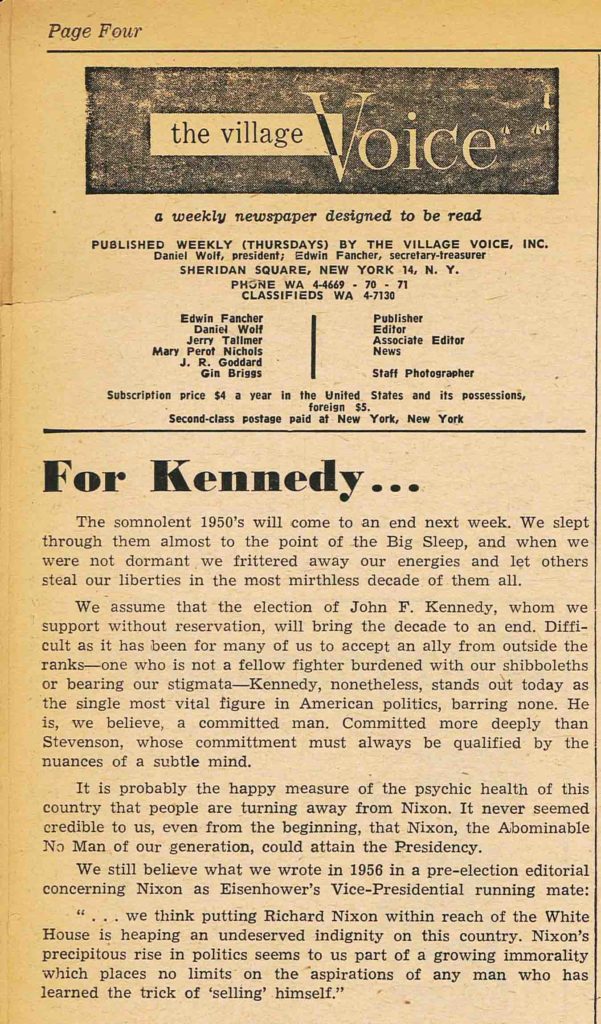 John Kennedy was assassinated in November 1963, and Robert, his attorney general, soon after left that office to run for U.S. senator from the state of New York. “There are more of us than there is trouble,” the ever optimistic RFK told a reporter in 1964, upon hearing that his brother Ted had survived a plane crash. “The Kennedys intend to stay in public life. Good luck is something you make, and bad luck is something you endure.”

But more than his accent betrayed RFK’s Boston origins, and there were plenty of folks who labeled him a calculating carpetbagger. Voice writer Nat Hentoff wasn’t particularly concerned with Bobby’s out-of-state roots, and in an essay that, judging by its headline, “Bobby the K,” might have been written about a gangster, granted that as the nation’s top lawman, RFK “did curb some of the more mindlessly zealous viciousness of the Immigration authorities.” But the jazz critic and social-political commentator wasn’t enthusiastic about either Kennedy or the Republican incumbent, Kenneth Keating. “I tried to rationalize a vote for Keating, so eager was I to vote against a man I consider as multiply dangerous as Robert Kennedy,” he wrote. The incumbent senator’s “antic performance” during the Cuban missile crisis and his anti-school-busing stance, however, left Hentoff with no one to vote for. He was not alone in New York in feeling that RFK was too ambitious to be satisfied even if he won the Senate seat, writing in his opinionated piece, “I am bugged when Kennedy beaters of the bush try to con me by pretending New York State is anything but a way-stop for this man on the run.” 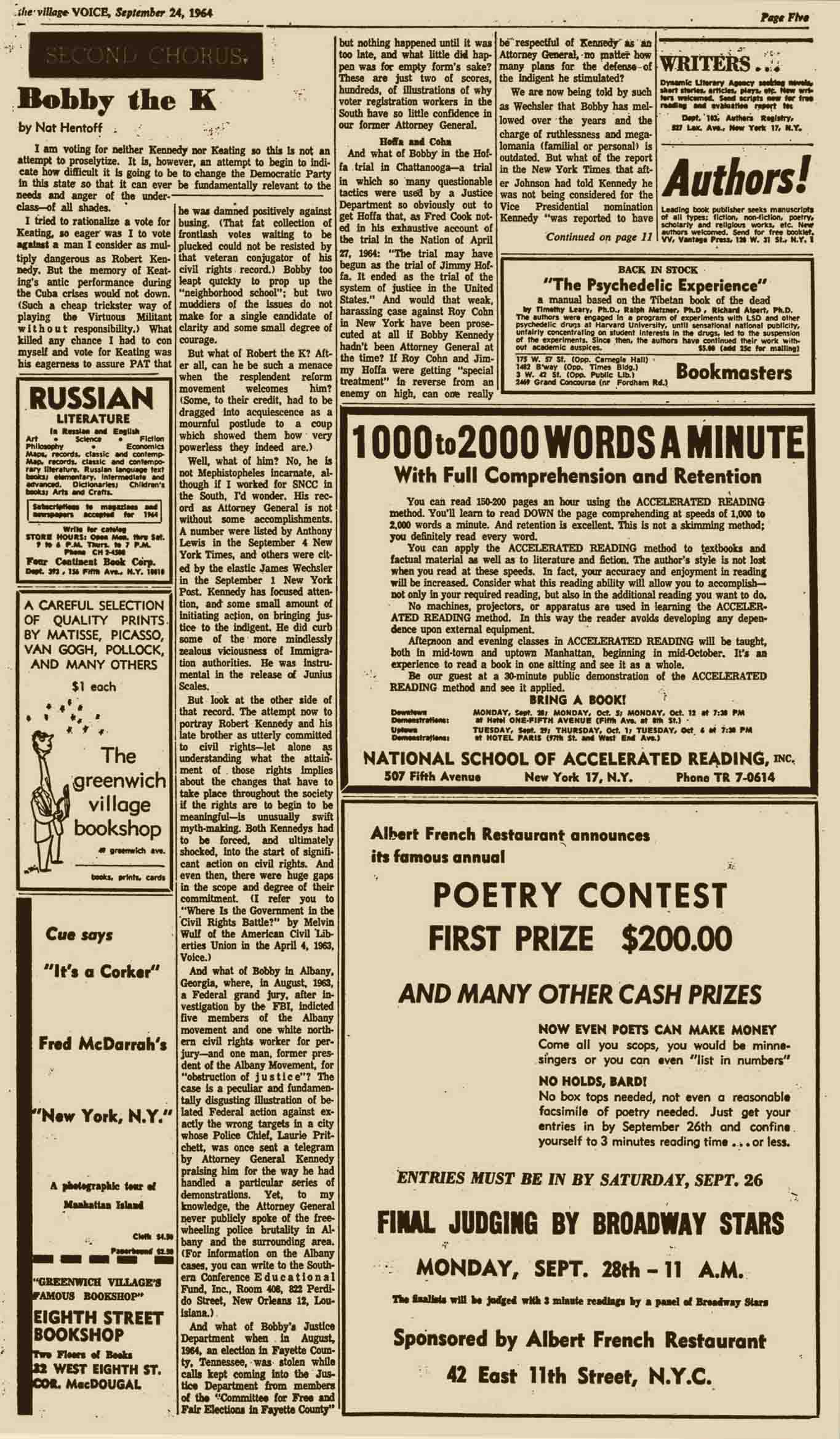 As Mary Perot Nichols reported in the following issue, Hentoff wasn’t the only New Yorker who was strongly opposed to Bobby. Gore Vidal, the author and gadfly who never met an ax he wouldn’t happily grind down to a bloody nub, came out hard against RFK’s candidacy. “We believe,” the novelist told the assembled press, “that one of the great myths of current American politics is the widespread belief that Robert Kennedy is a liberal. We believe that he is anti-liberal and disturbingly authoritarian.” By default, Vidal and his friends were thereby supporting the Republican, Keating, who had made it clear he would “never, never” support Barry Goldwater, the Republican presidential candidate. These were days of strange political bedfellows. 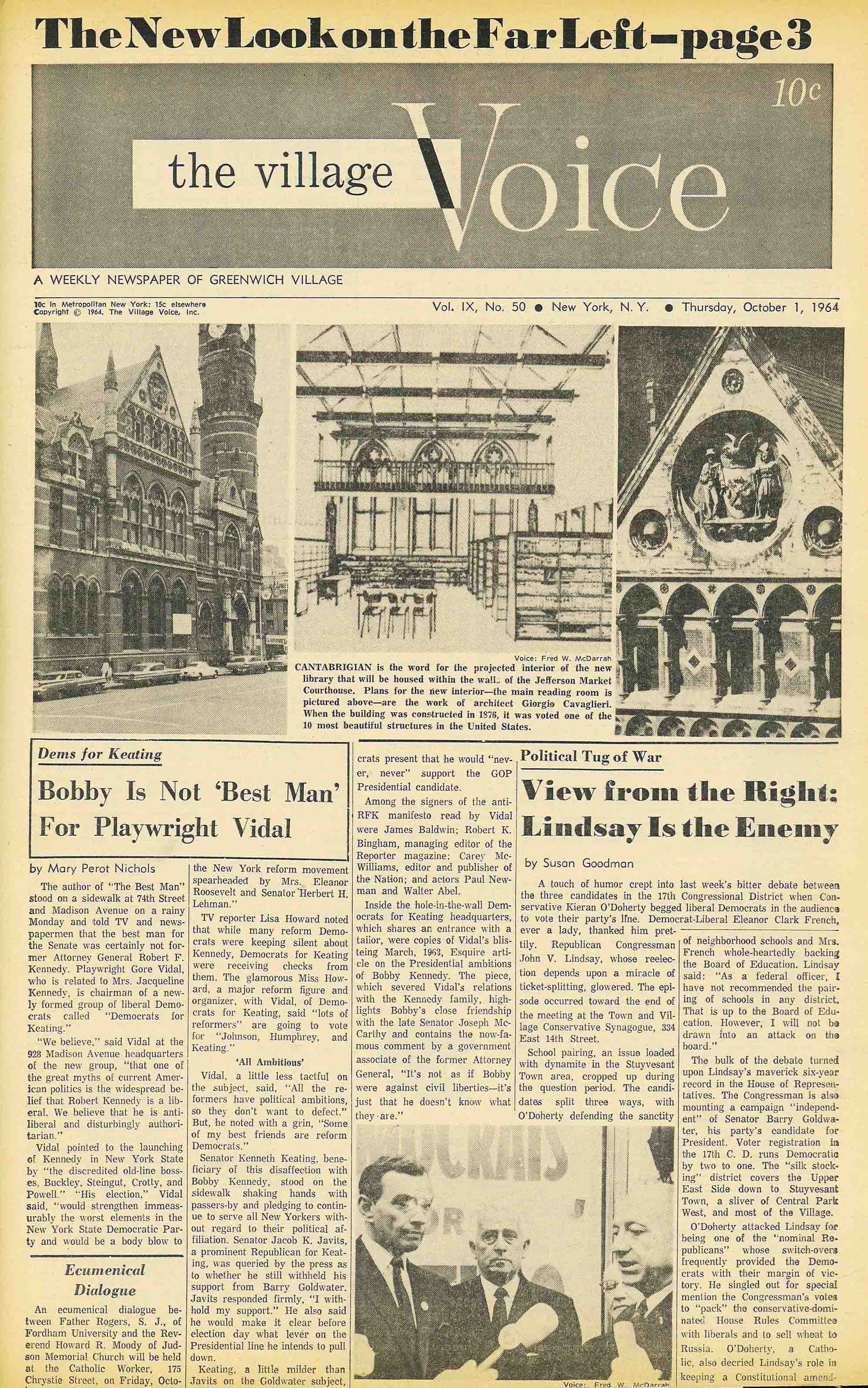 The following week, Jack Newfield reported in the Voice, “Robert F. Kennedy evoked Beatlemania, laughter, and tears during a tour of Greenwich Village Friday night.” At first, the article reads, the younger Kennedy didn’t connect with the crowd: “Nothing he said struck the nerve that can ignite an adult crowd. John Kennedy’s addresses during the autumn of 1960 were like music from the pen of Duke Ellington; Friday night Bobby lacked even the beat of rock ’n’ roll.” But after a testy exchange about New York’s stop-and-frisk ordinance — “Kennedy snapped, his eyes cold. ‘It’s a state law.’ ” — the crowd was reluctant to let the worn-out candidate leave, and he began shaking hands and signing autographs as the hysteria built. Voice editors used one of Newfield’s observations for the headline — “ ‘Mommy, he touched me,’ a 10-year-old screamed shrilly.” In concluding his take on the long day of campaigning, Newfield returned to his Beatlemania hook: “A disheveled nymphet, clutching an autograph to her almost breasts, sighed, ‘I’d rather have this than Ringo’s.’ ” 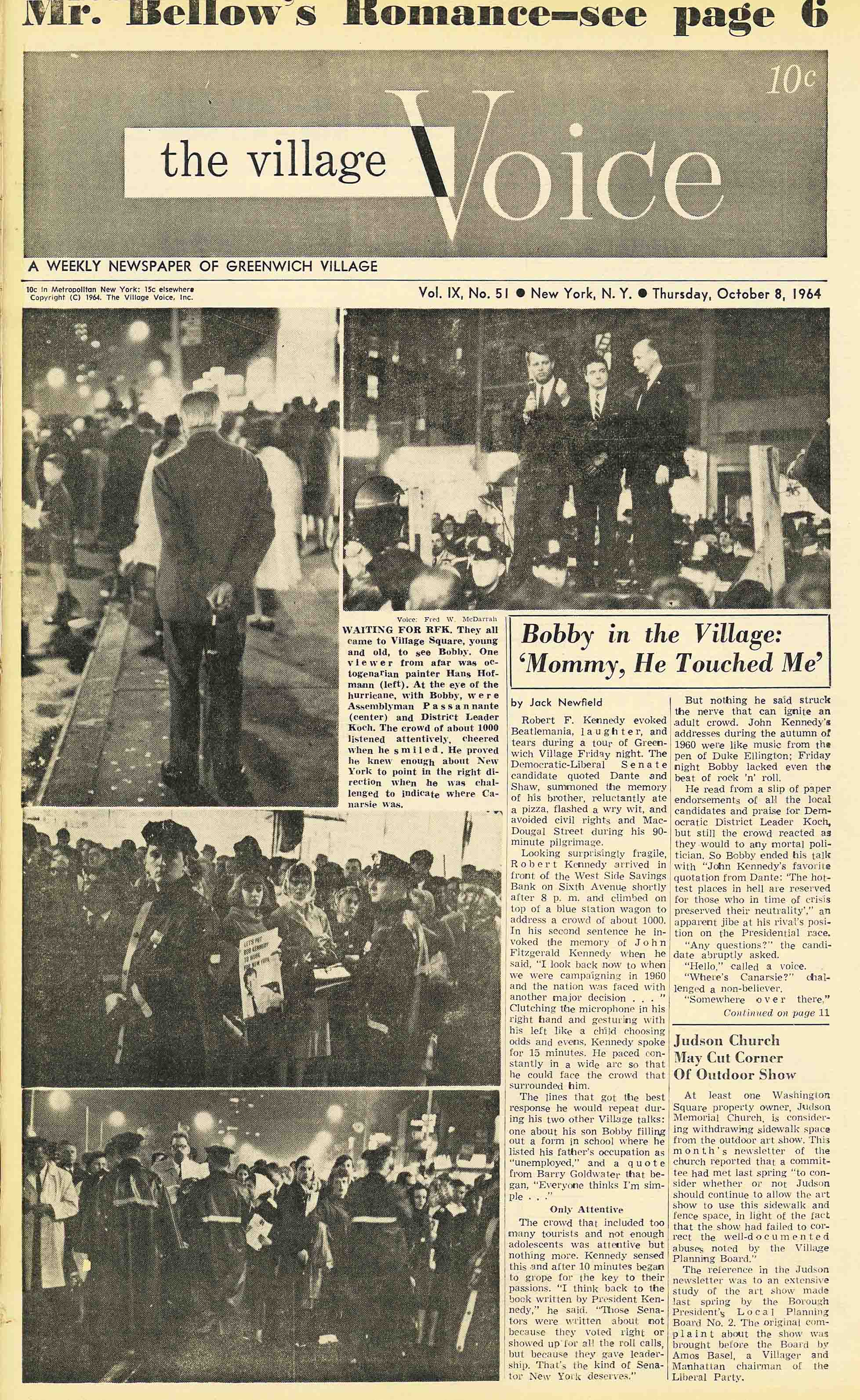 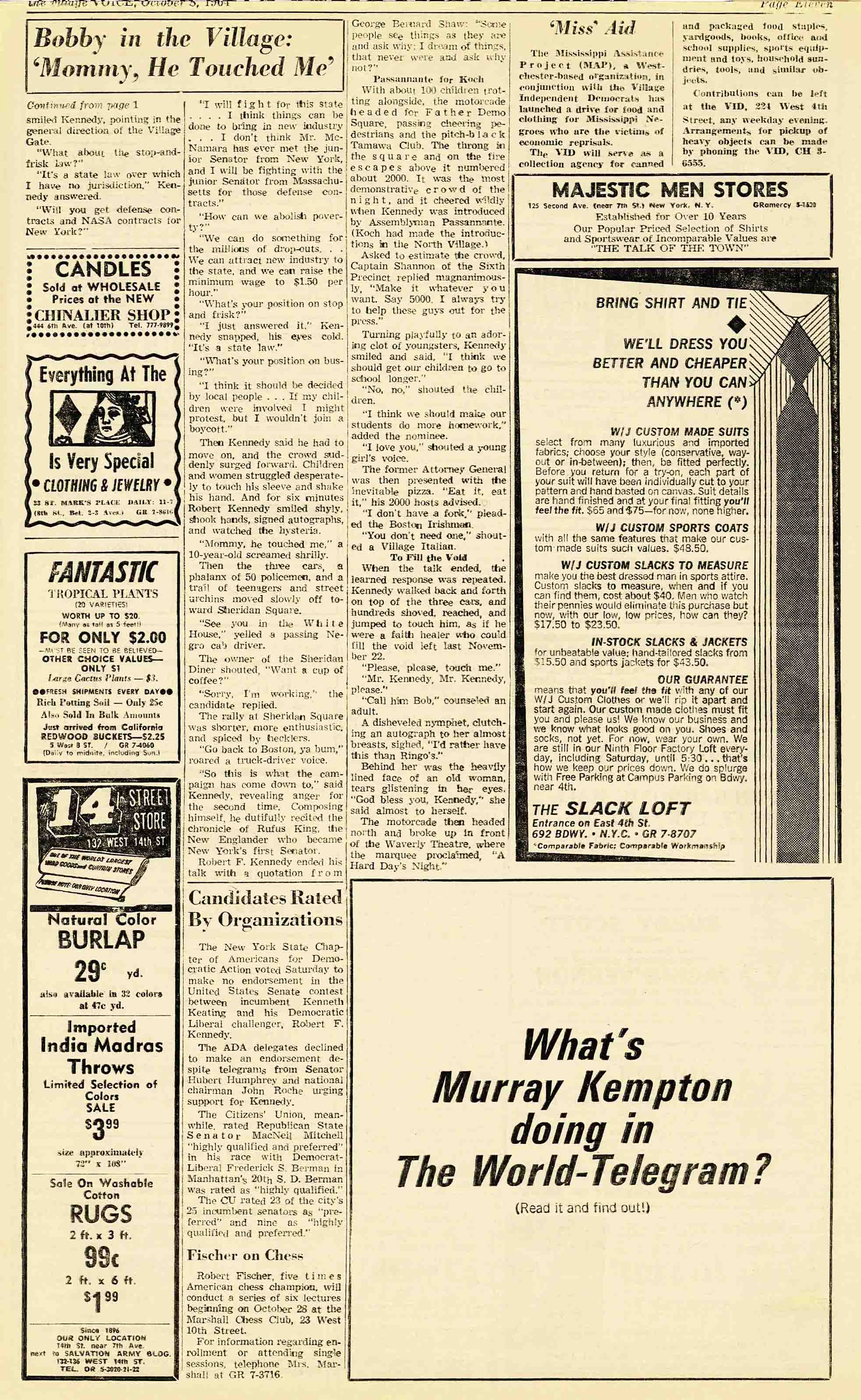 The following week the debate continued on the Voice Letters page, with a missive arriving from Taylor Mead — one of the “superstars” then appearing in Andy Warhol’s underground films — which called Kennedy “the James Dean of politics.” 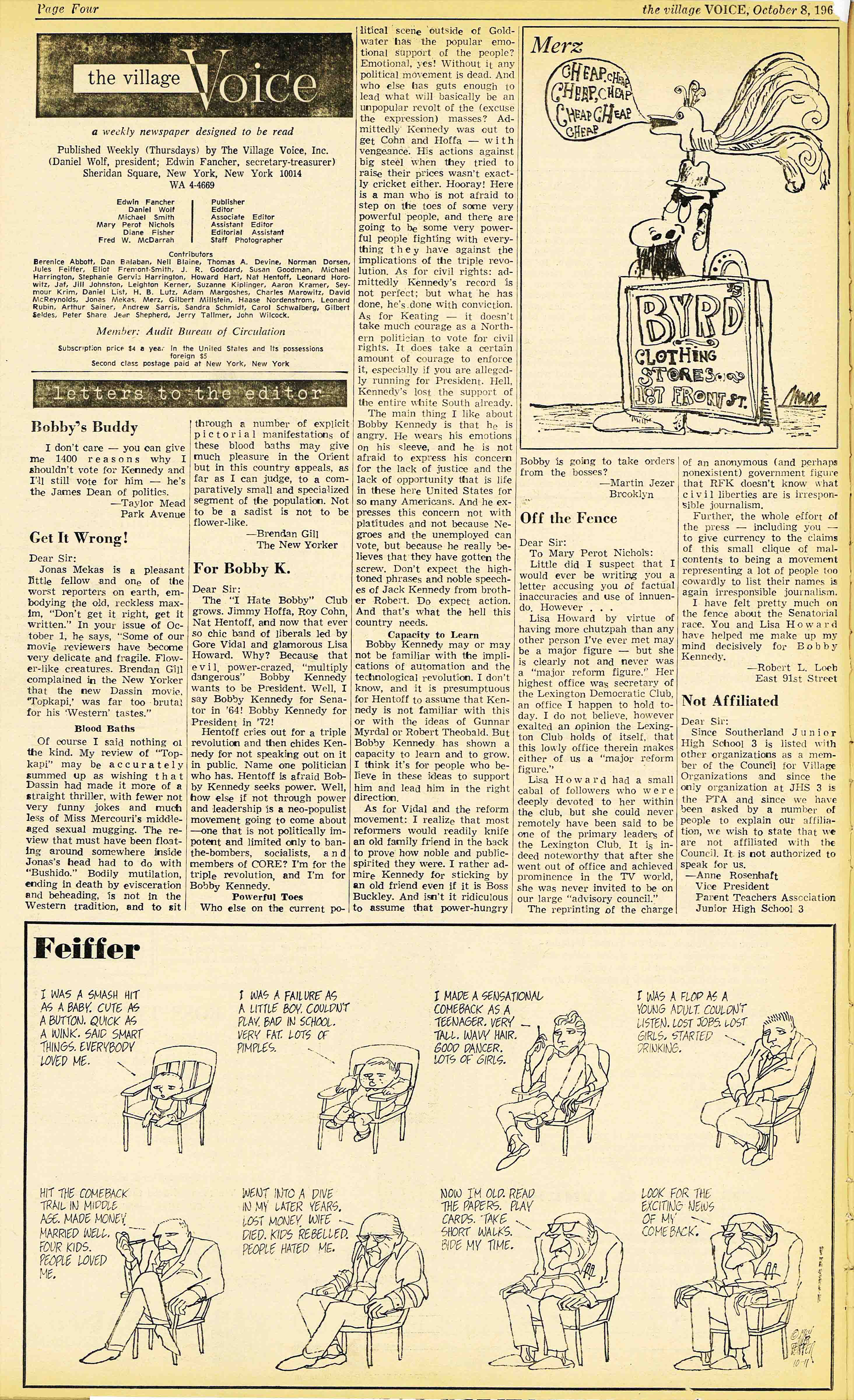 As the election neared, the Voice ran a great Ben Shahn cartoon of Goldwater as an overgrown baby. That same issue also featured Norman Mailer’s riposte to Hentoff. 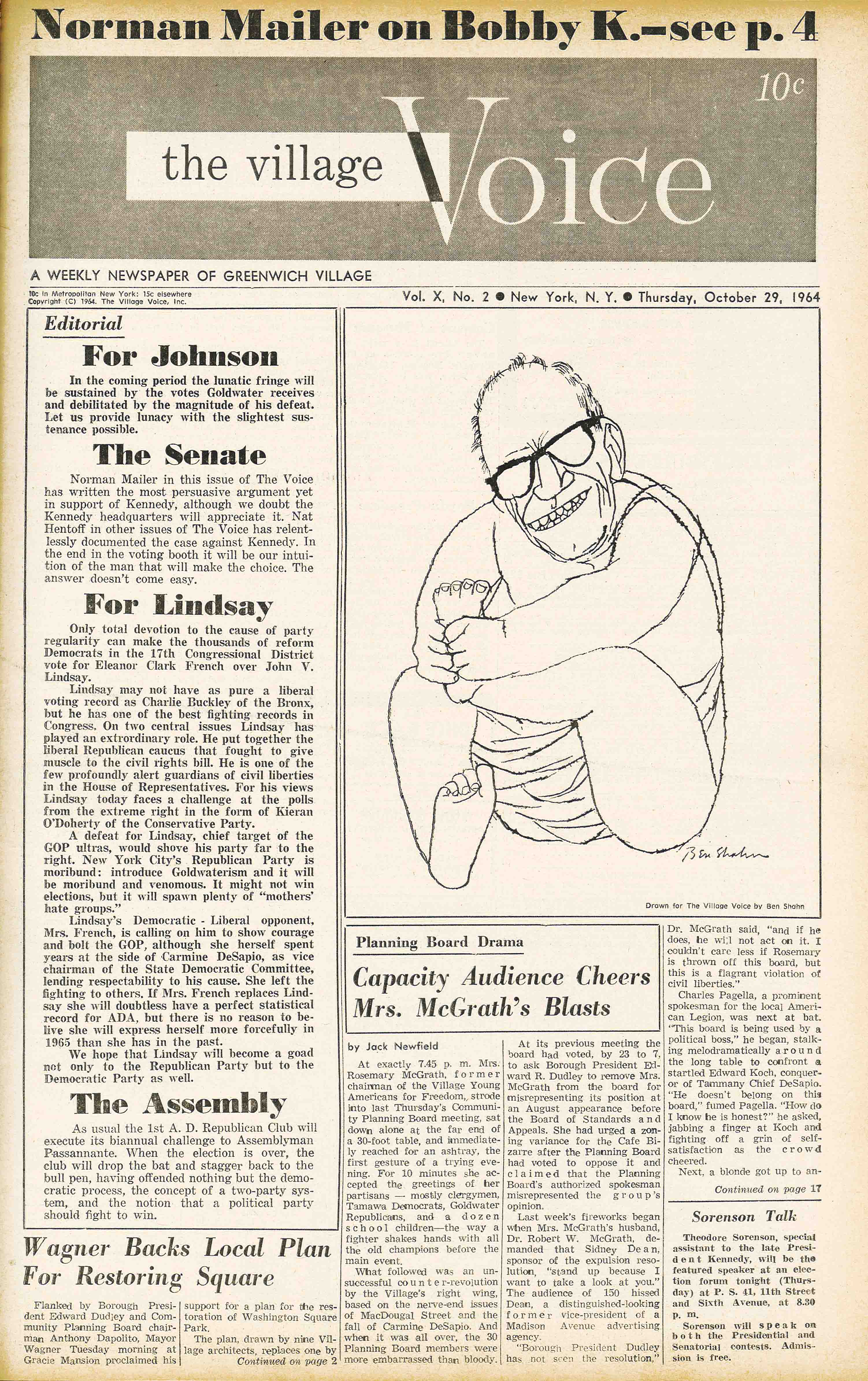 In an endorsement for the Voice titled, “A Vote for Bobby K. — Possibility of a Hero,” Mailer wrote, “When there first began to be talk, back last winter, of Bobby Kennedy going in against Kenneth Keating, I had the reaction of a prize fight manager who has seen better days: Put down no bets, they’re a couple of bums.” But as he watched the race, the novelist began to change his mind. Although he aptly describes Kennedy as having “the face of a Widmark gunsel,” he also also views the the 39-year-old candidate as someone who can grow and change, “an active principle.” Ultimately, Mailer makes his choice clear, writing, “To vote for a man who is neuter is to vote for the plague. I would rather vote for a man on the assumption he is a hero and have him turn into a monster than vote for a man who can never be a hero.” 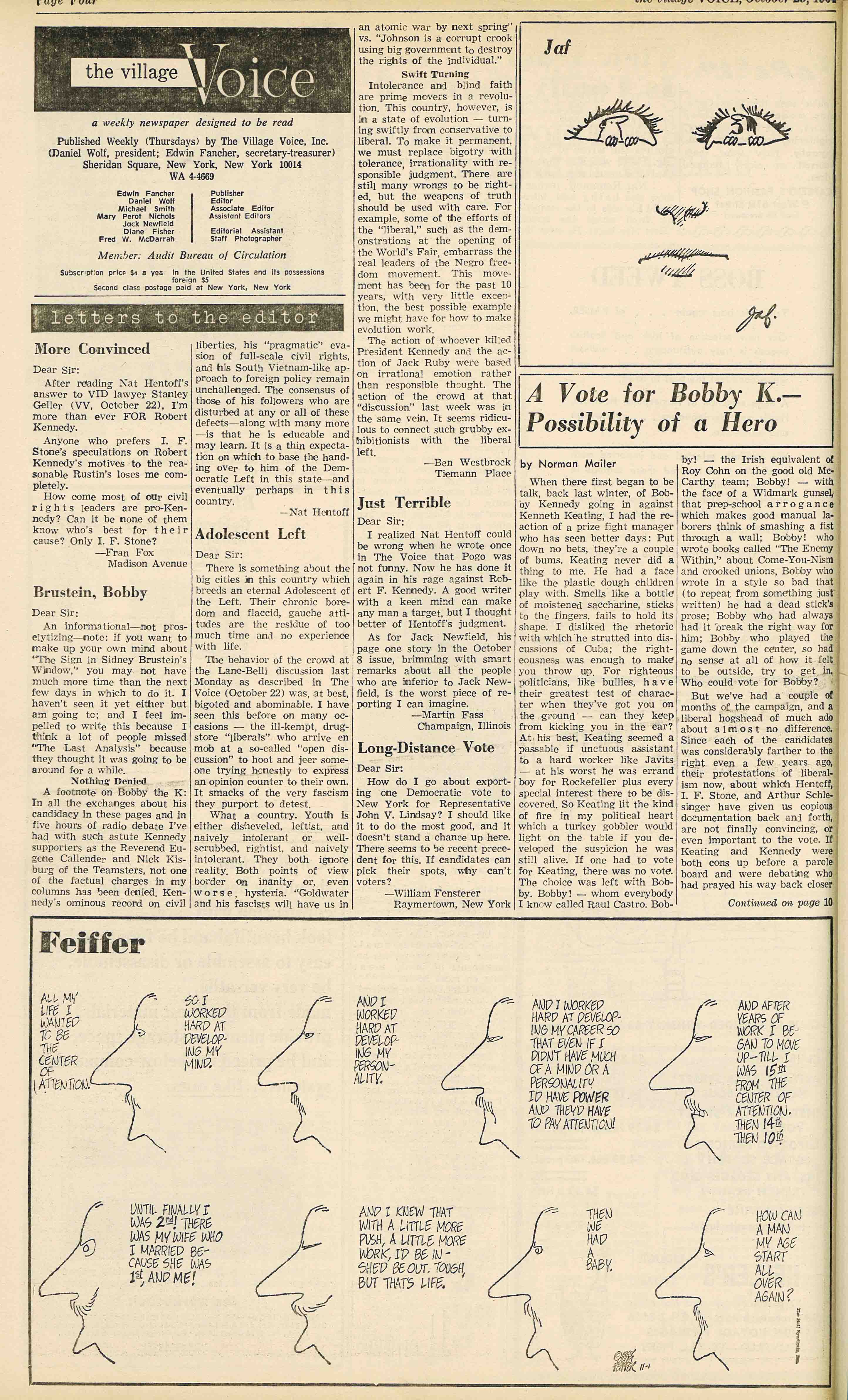 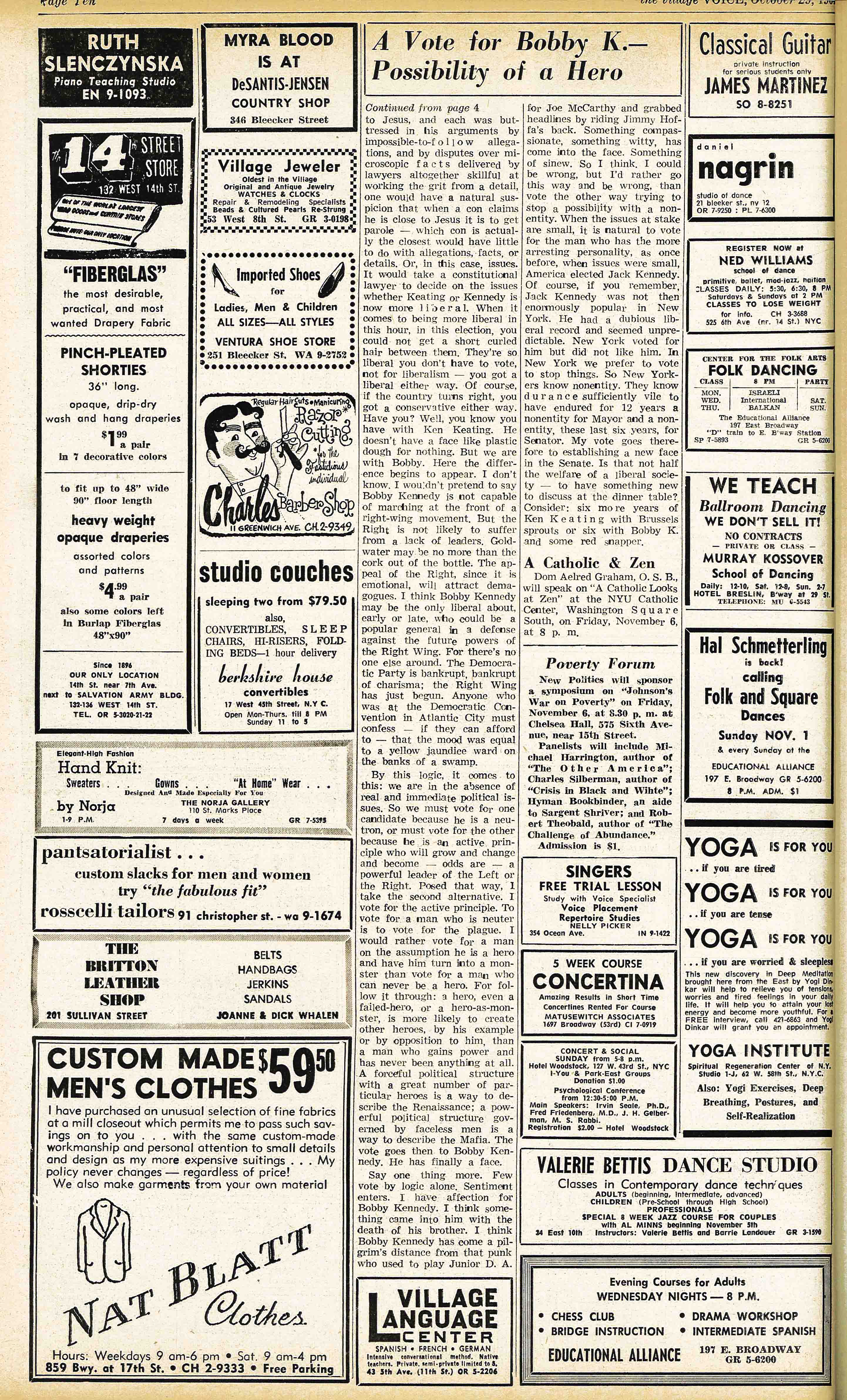 In the post-election issue, the Voice was still in some ways as parochial as its slogan, “A Weekly Newspaper of Greenwich Village.” Although RFK won the Senate seat, the paper mainly focused on how he had lagged in the Village, “splitting the 26,000 votes evenly with Kenneth Keating.” Four years later, both the candidate and the paper had grown. 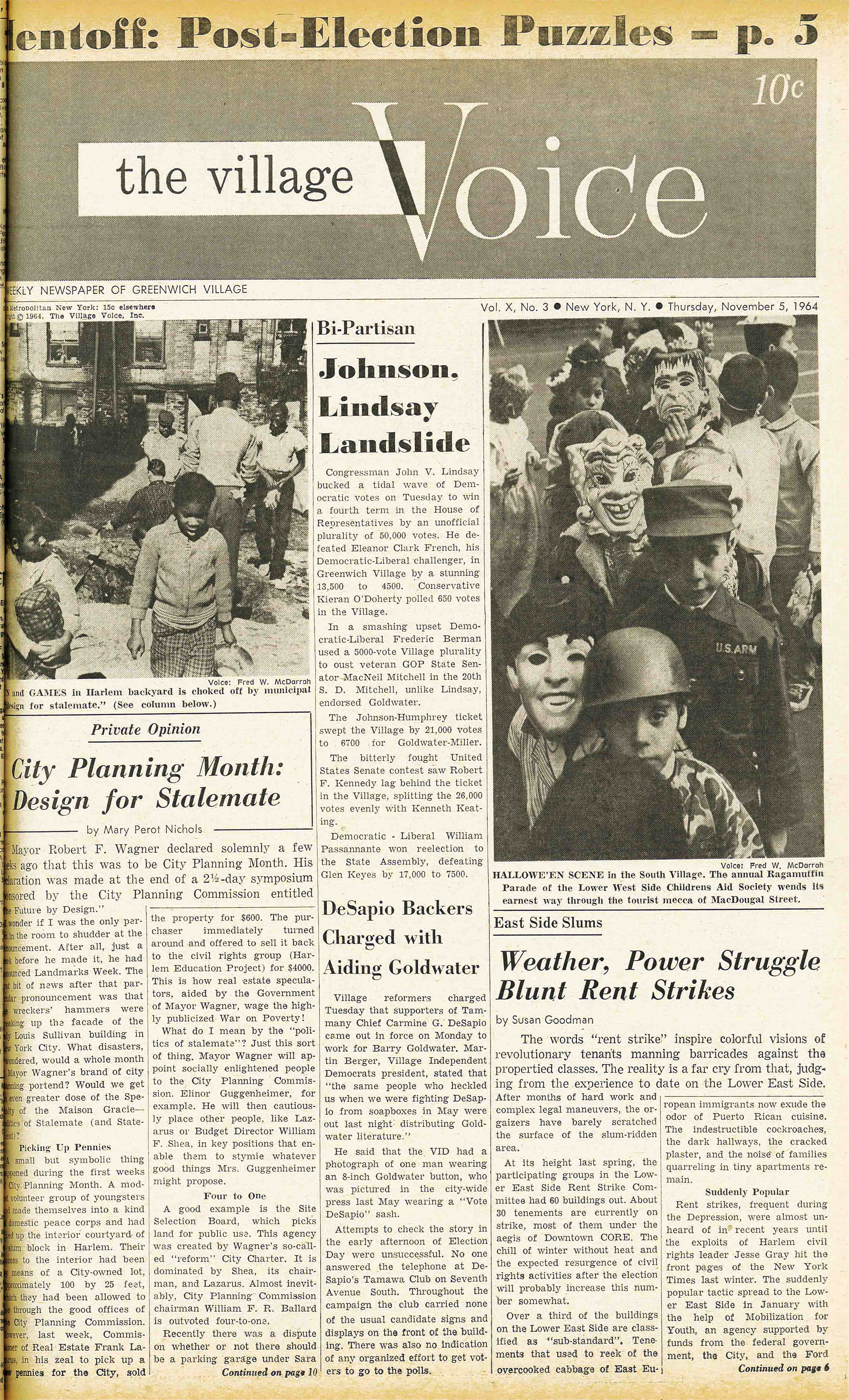 By 1968 the Village Voice was “The Weekly Newspaper of New York,” and Bobby Kennedy was, as many had predicted in 1964, running for the White House. The Voice’s always on-the-scene photographer Fred McDarrah caught the Irish politician working the crowd during the St. Patrick’s Day parade, wearing what we can only assume was a green boutonniere in his lapel. Below the picture, reporter Jack Newfield chronicled the presidential candidate’s travels in America’s heartland: “The frenzy began as soon as Kennedy arrived in Kansas City at 8:30 p.m. Sunday. Three thousand people had waited for two hours to see him, even though all he was scheduled to do was switch from a commercial airliner to Governor Robert Docking’s private plane.… The crowd broke through police lines and charged at Kennedy. It looked like the start of the land rush in Kansas 100 years ago, as hundreds of people, almost all of them young, raced onto the airport runway. Once they reached Kennedy, however, few of them knew what to do — except touch him and scream his name.”

Newfield captured the intense hope that a large part of the electorate was placing in Kennedy as someone who could change the direction of the country, which many felt had been going off the rails since his brother’s assassination, five years earlier. The Vietnam War had broken the resolve of Lyndon Johnson, who declared he would not seek another term as president, opening the door for Kennedy, Eugene McCarthy, and Johnson’s vice president, Hubert Humphrey. The Voice, now not only a New York paper but one with a national readership, would report on the whirlwind Democratic campaign — as well as Richard Nixon’s rise on the Republican side. 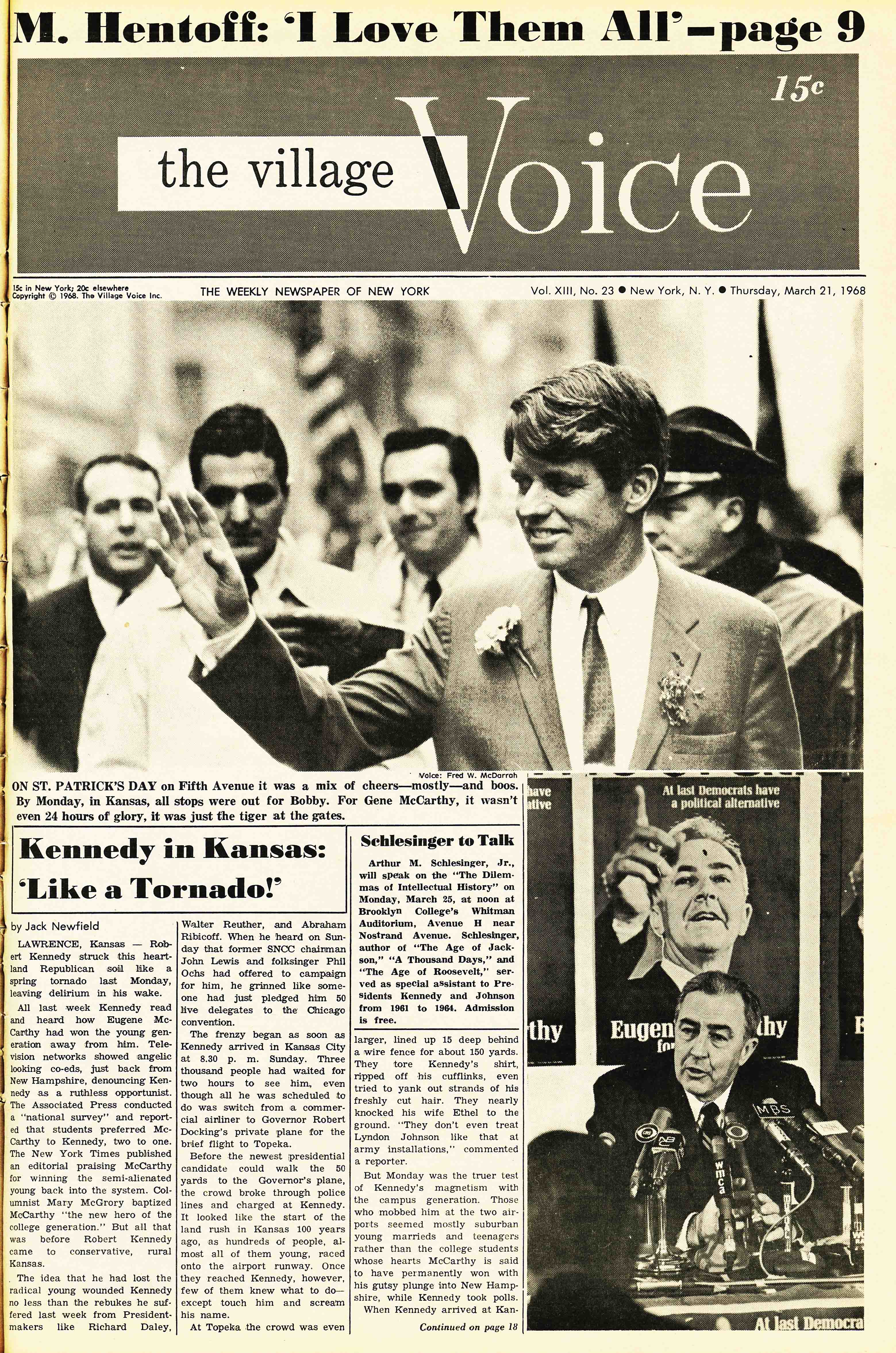 On April 4, tragedy struck America as that great truth-speaker to power Martin Luther King Jr. was murdered, in Memphis, Tennessee. In one of the most powerful speeches in American history, Robert Kennedy broke the news to a largely African American audience in Indianapolis, sharing with them the grief he still felt from the death of his brother:

“Even in our sleep, pain which cannot forget falls drop by drop upon the heart, until, in our own despair, against our will, comes wisdom through the awful grace of God.” 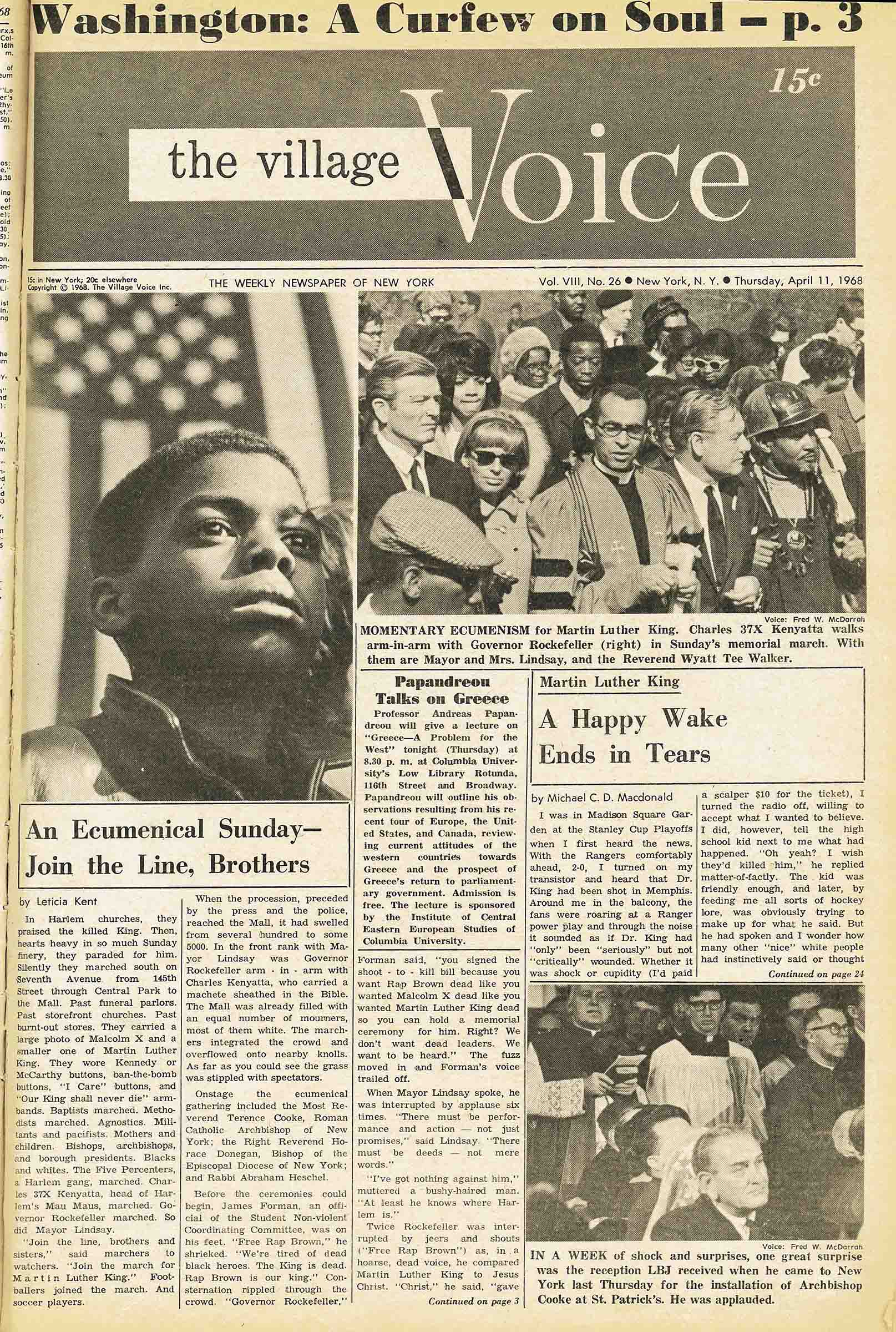 But the campaign continued, and during the next month the Voice reported on both RFK crisscrossing Indiana for the Hoosier State’s primary and the Beatles in New York. Lennon and McCartney were looking stylish in their casual suits, but Jack Newfield reported that Kennedy looked like “a fighter at the end of 15 savage rounds waiting for the judges’ decision. His front tooth was chipped — he’d been pulled out of his car during a motorcade.… His stubby, trembling fingers were red and swollen from a thousand Indiana hands. Exhaustion blotched his skin and thickened his features.” But by the next morning, as Indianians headed for the polls, RFK was up for a rough game of touch football, where he interfered on a pass to Richard Harwood, a reporter playing on the other team. Harwood made the touchdown catch but was angry; Newfield wrote that Harwood told the candidate, “You’re a dirty player, and a lousy one too.” Newfield adds, “Kennedy winced, but later that night, Harwood was one of the few reporters permitted in the suite with Kennedy as the election returns came in.” 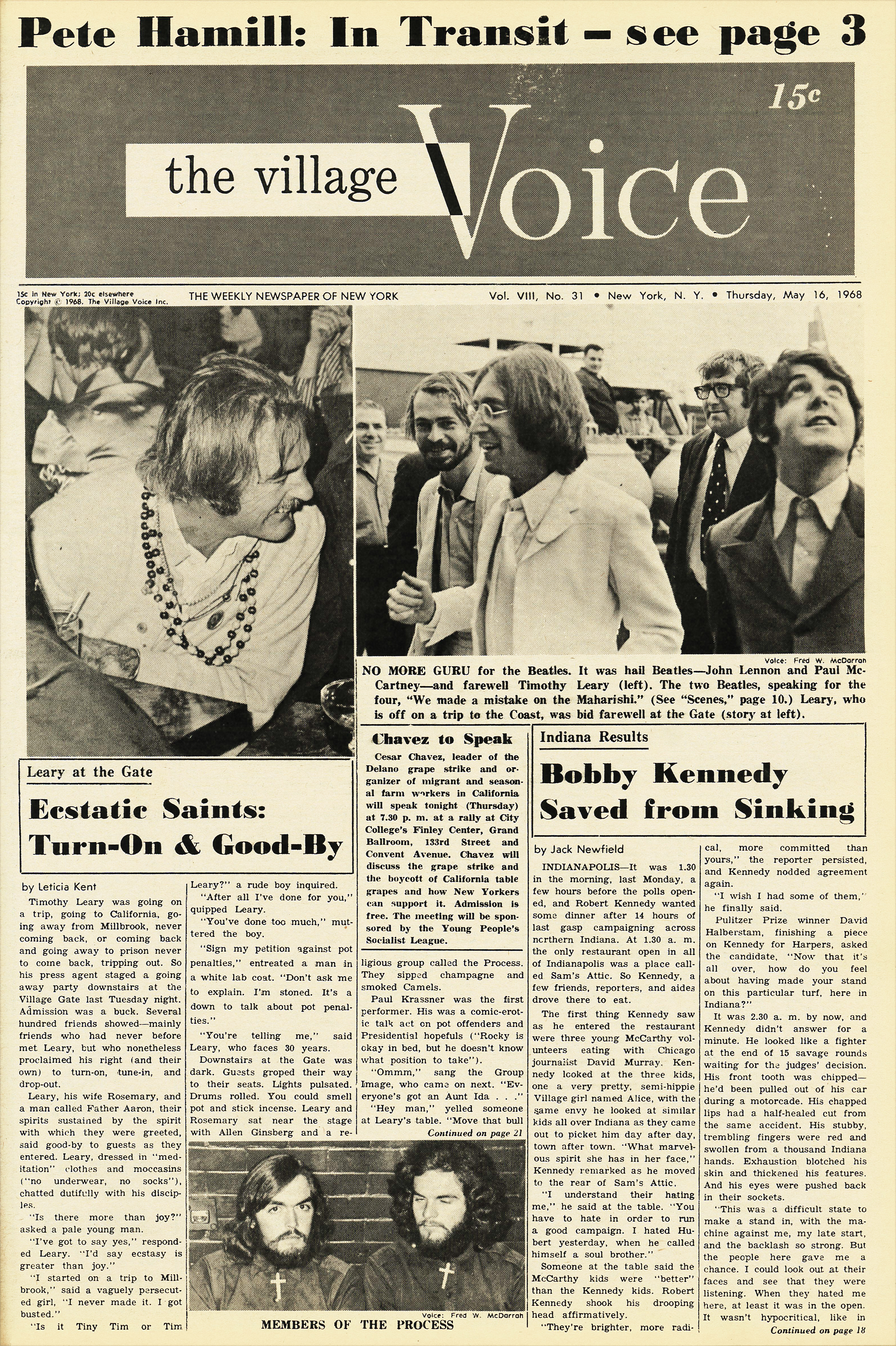 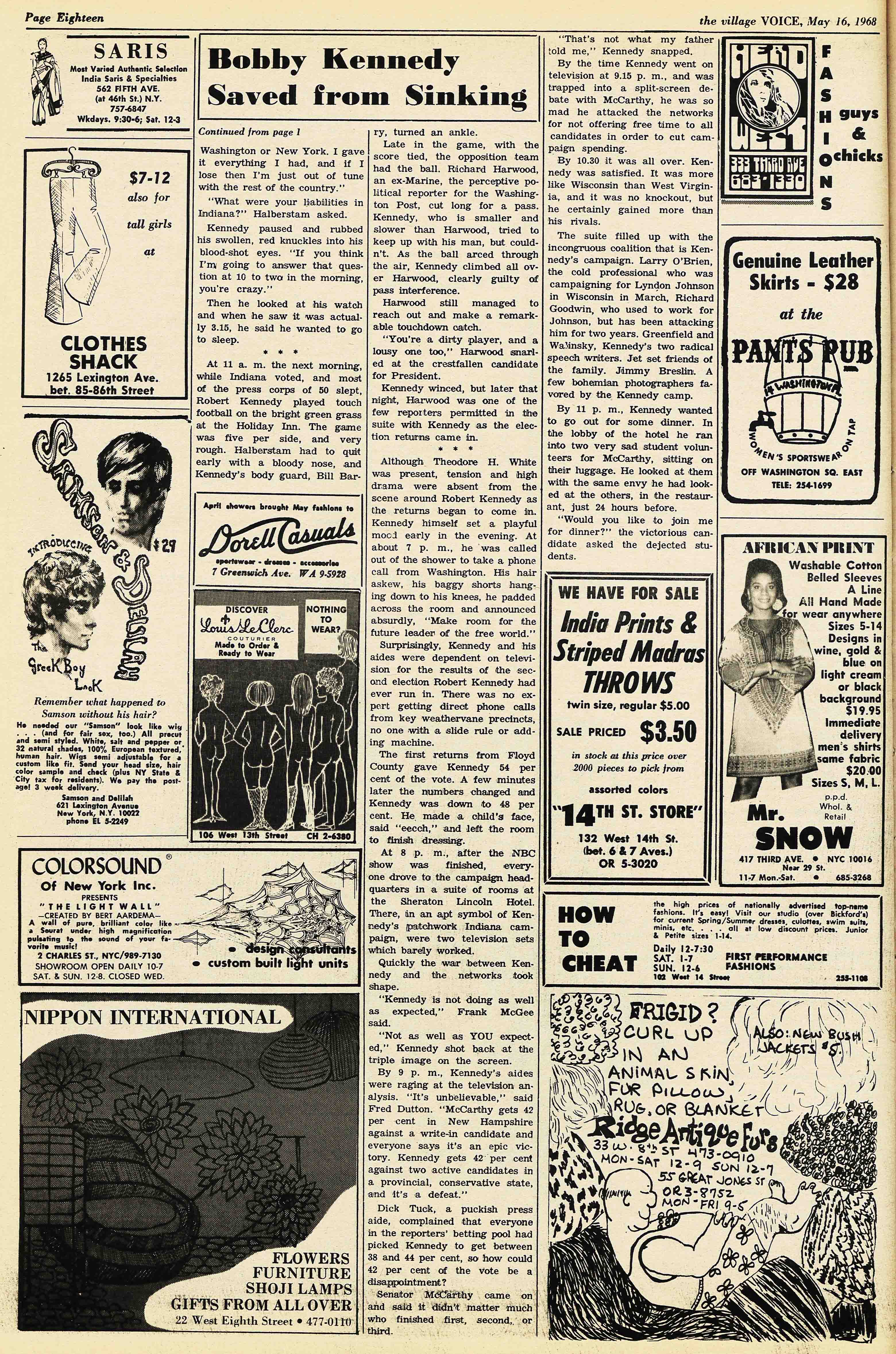 Pete Hamill was another reporter the Voice sent out on the campaign trail. In a long essay he grappled with the violence that was sweeping the country, those hatreds that RFK had spoken of in his impromptu elegy for Martin Luther King. Hamill also wrote of meeting a couple who were taking their daughter to see the candidate: “ ‘We never saw President Kennedy in the flesh,’ his wife said. ‘And so we want the little girl to see Bobby.’ ”

Hamill was disturbed by radical kids who threw stones at Kennedy’s car. “I don’t believe that those young people were just an obscure case, hardened up by the barbarities of Marxist prose. No. They were the truest children of the Johnson era, because if the past few dirty years have taught us anything, they have taught us how to hate.” Near the end he draws a line from the JFK assassination directly to those violent protestors: “The smug, pampered, self-righteous kid who takes rocks into the darkness of an overpass and pelts a candidate with them is only a step away from picking up a Mannlicher Carcano with a telescopic sight.” 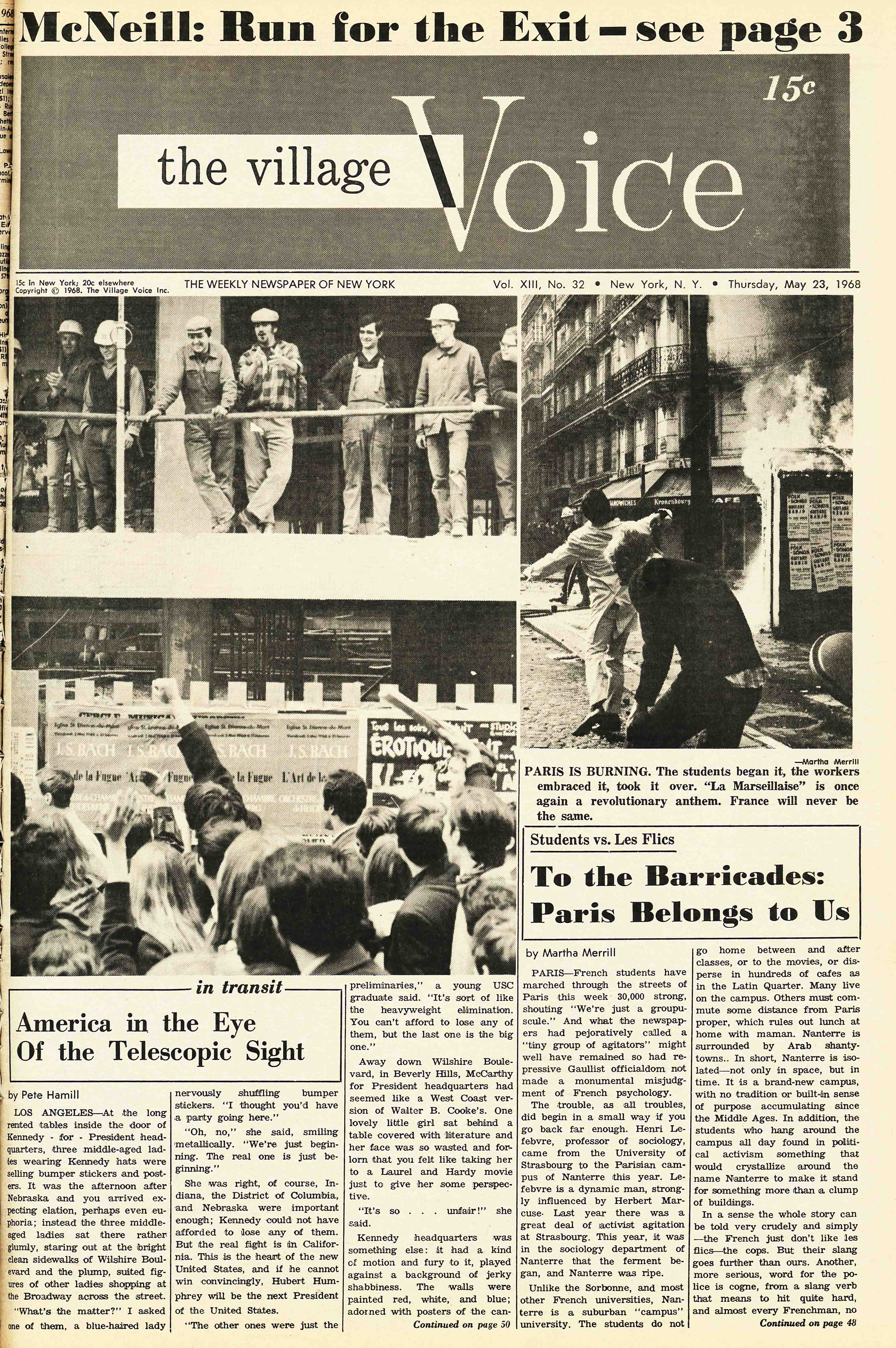 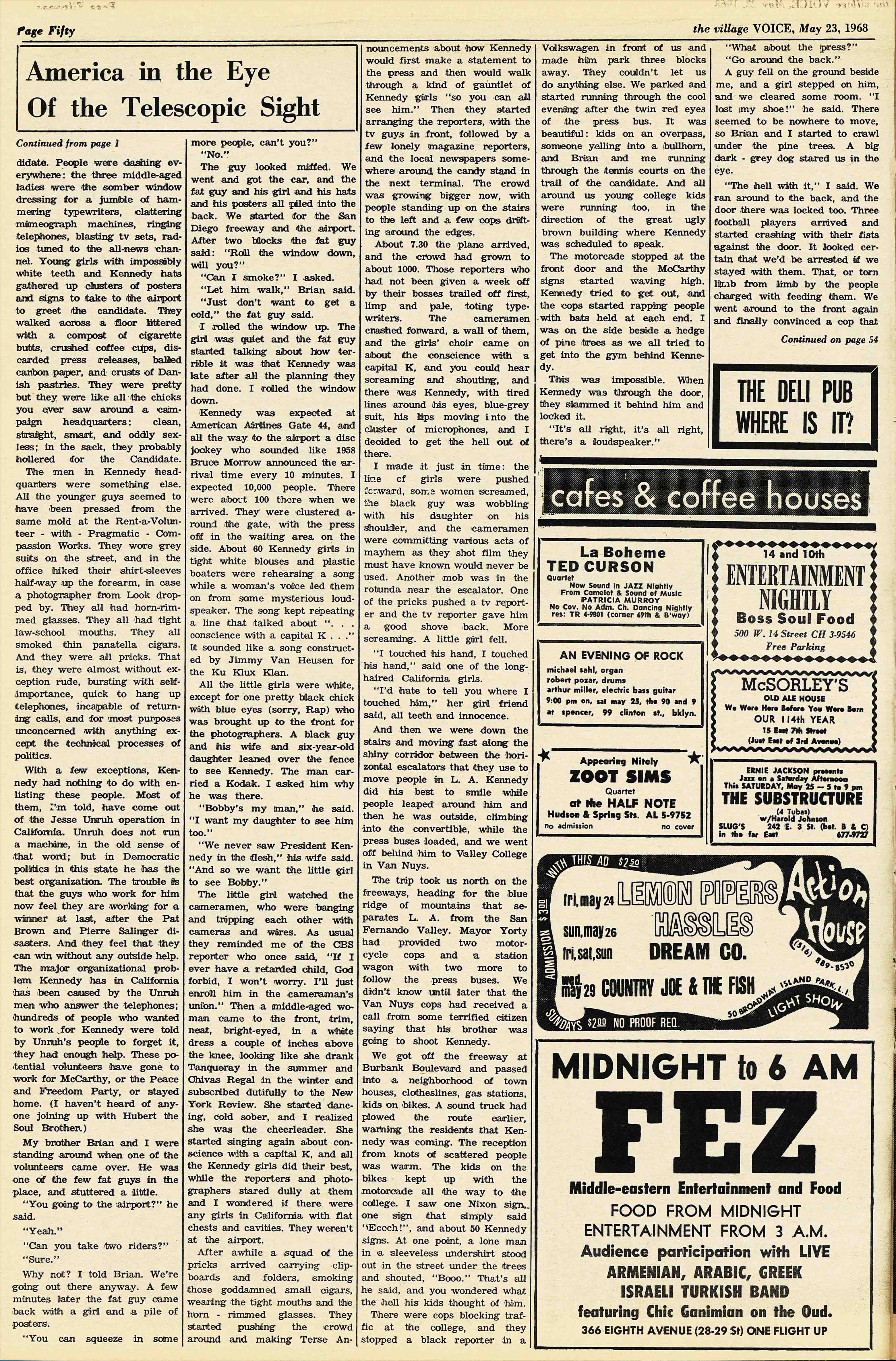 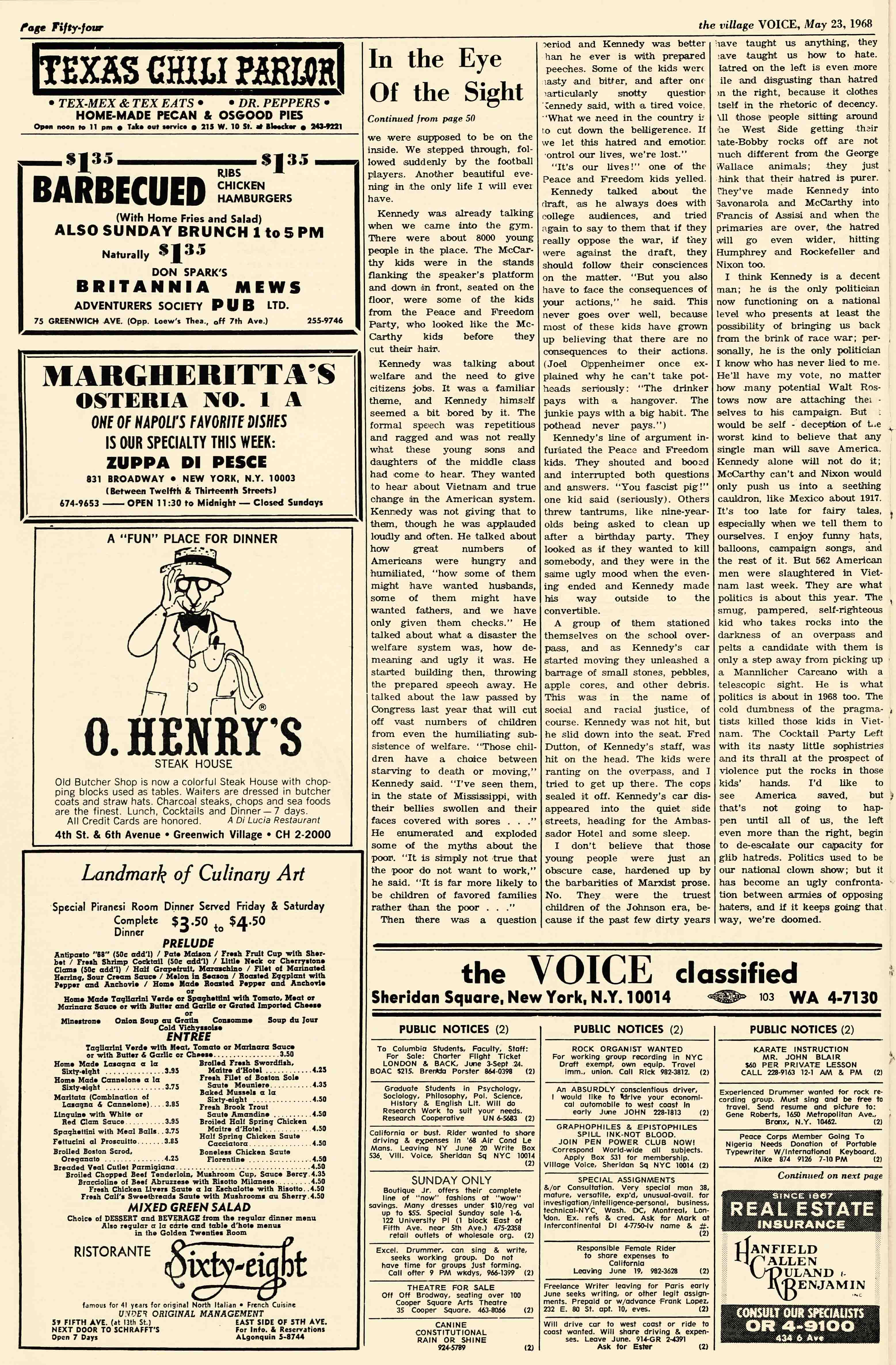 If hatred was indeed roiling the land, things were a bit calmer in the May 30 Letters section. Taylor Mead was back again, but his ardor for RFK of four years earlier had cooled. Plus, the copy department had made an error in Mead’s letter that they must have been glad hadn’t appeared in a Mailer essay.

The next week, the darkness fell. 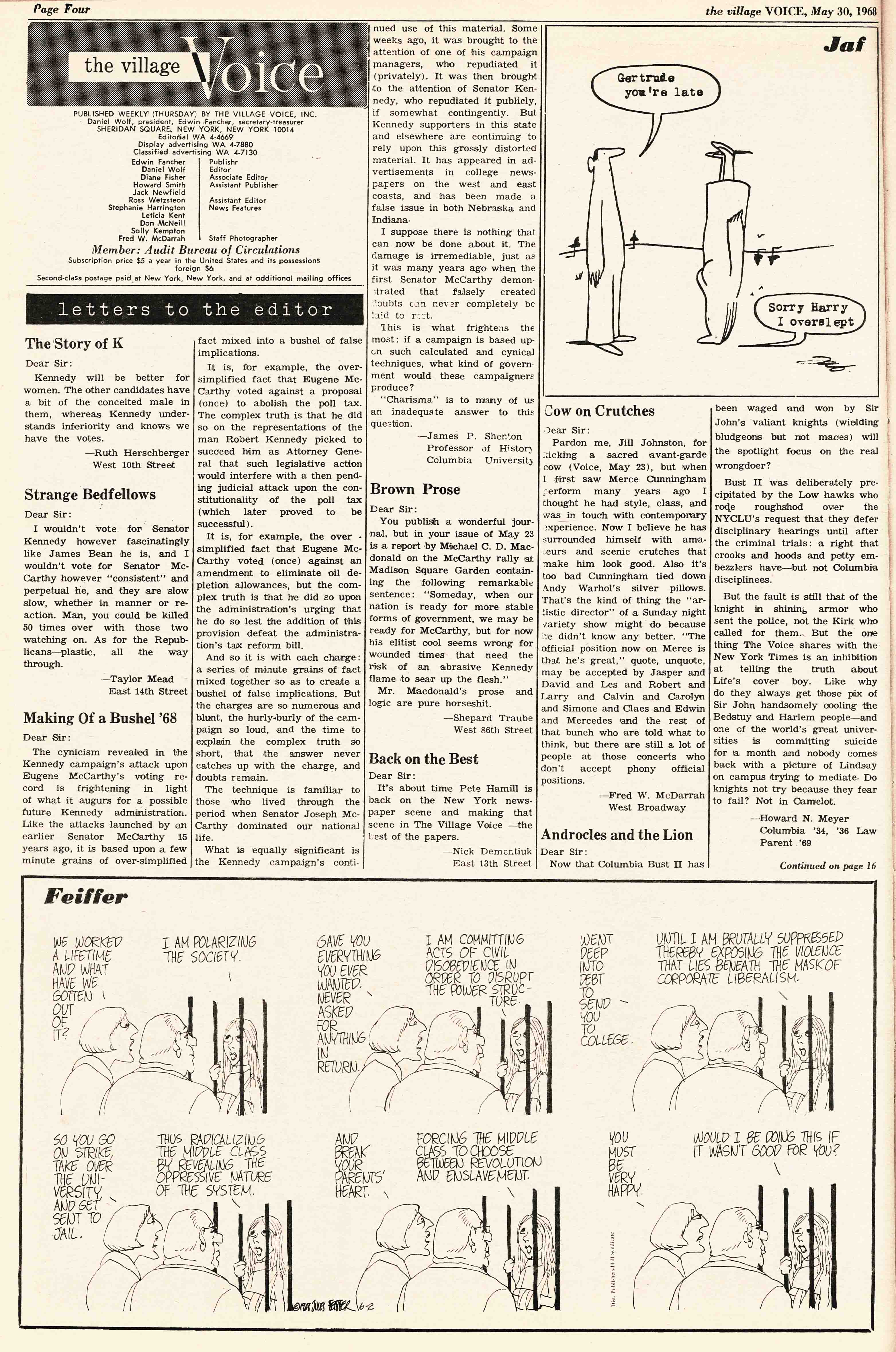 To continue reading about the Voice’s coverage of Robert Kennedy, following his assassination, click here.