People like to look at people. If you boil down the long and winding history of figurative sculpture to a single motivating kernel, that would be it. Some 40,000 years ago, when a Paleolithic man or woman in central Europe took a mammoth tusk and carved the Venus of Hohle Fels, it must have been that initial joy of looking at someone that sparked the idea. Then came further amendments: in Ancient Greece, the sculptor Polykleitos added muscular details, and suddenly we had not only a rendering, but an ideal representation, this time of the Spear Bearer in all his regal glory. Donatello suggested another revision in early-fifteenth-century Florence. His sculpture of Saint Mark, designed for the Church of Orsanmichele, was no fantastic, perfected vision. His saint is an old, bookish man, hunched over if stoic, worn down and scruffy after his years in the desert.

Emphases and forms have continued to shift and change, but the satisfactions have never abated; instead, they have only deepened and broadened. In the past hundred years, figurative sculpture has expanded in seemingly limitless directions. Artists as unalike as George Segal, Duane Hanson, and Fred Wilson together inaugurated a quiet but far-reaching renaissance even when their work was crowded out critically by more fashionable styles. Now, with the benefit of hindsight and an eye to the art of the present, we see clearly that figuration has long offered a rich set of traditions — and that it is now the wellspring for the best art of our time.

That’s the insightful lesson of “People,” a group exhibition at Jeffrey Deitch that’s remarkable for its flexibility and economy: 33 figurative sculptures by 29 artists, mostly working in the past 15 years. But the range of perspectives these works offer, and the variability in the responses they can inspire, is extraordinary. Part of the show’s cleverness comes through carefully considered juxtapositions. At the front of the gallery is Karon Davis’s striking And miles to go… (2018), a depiction of a weary black man made of crumbling white plaster bearing a child on his shoulders, her head resting on her father’s. Pressed in her tiny palm is an American flag, and here we have a succinct comment on the long and distressed road to civil rights.

Next to them is Tony Matelli’s Sleepwalker (2009), an expertly rendered sculpture, stunning in its fidelity, of a curly-haired white woman wearing only a pair of white underwear, stumbling absent-mindedly with her eyes closed. Next to the man and his child, the woman looks vaguely strained and uncomfortable, but not enough to wake her, which amounts to a neat summary of race relations in America. (In 2016, a companion sculpture by Matelli of a man lurching lazily in skimpy white briefs — he must be the Sleepwalker’s husband — was shown on the High Line.)

Many of the people in this gallery seem lost in thought. In John DeAndrea’s A Classical Illusion (1987), a nude woman leans dreamily against the marble fragment of a man’s bust and looks downward, gripped, presumably, by the fantasy of a perfect partner. Pawel Althamer’s Mohammed (2013), a grayish cyborg with the face of a child, sits on a bench with his eyes fixed on the floor. Then there is Duane Hanson’s striking and ingenious Cheerleader (1988), who fiddles pensively with her fingers and gazes outward. Her head is not turned away, but try to look her in the eye and she sees right past you.

Works like these emphasize the perverse pleasure of uncanniness. They also stress that stories are not everything. One of the most brilliant discoveries that figurative sculptors have made, especially in the past sixty years, is that naturalistic bodies can be warped into unsettling abstraction. Martin Honert’s English Teacher (2010) is short and flat-faced, as if his head and body were penciled in and then erased away. Behind him is one of the most intelligent and confusing works in the show, Stefan Hablützel’s cunningly naturalistic double portrait of two men in peculiar and dated clothing, titled 1962-1929 (1997). The men are attached to a wall, so they seem to be floating away, which makes sense — no matter how much they look like us, they come from another world. (Hablützel is like a dry Maurizio Cattelan — instead of humor, we get otherworldliness along with naturalistic precision.)

There are other disturbances, too. Throughout the exhibition, there is an astounding amount of sexual fright. Near the front door, there is a terrifying sculpture by Narcissister titled Totem (2018) of hypersexualized sex dolls, with enormous breasts and ruby red, puffed-up lips, stacked one atop the other, nearly reaching the ceiling. Not far are two naked women sprawled on the floor, both by Elizabeth Jaeger. One of them, Mudita (2012), wears an alarming smile as she leans on her back and holds her ankles; on closer inspection, she has no vagina. These pieces are especially enriched by Kiki Smith’s Tale (1992), a violent depiction of a woman on all fours with a long bloody specimen emerging from her genitalia.

Remarkably, the quieter works in the show are not lost amid the commotion. One simple, lovely, and untitled work is by Koffi Koffi Kouakou, Coulibaly Siaka Paul, Emile Guebehi, and Nicolas Damas. It shows a man in sunglasses, bell bottoms, and a finely patterned black-and-white shirt who looks cool and collected despite the noise. And nothing seems to bother Kenny Scharf’s silly and joyous stick-figure-like man, Power Happy  (1987), with his pronounced erection and enormous smile. He points gladly at anyone nearby. 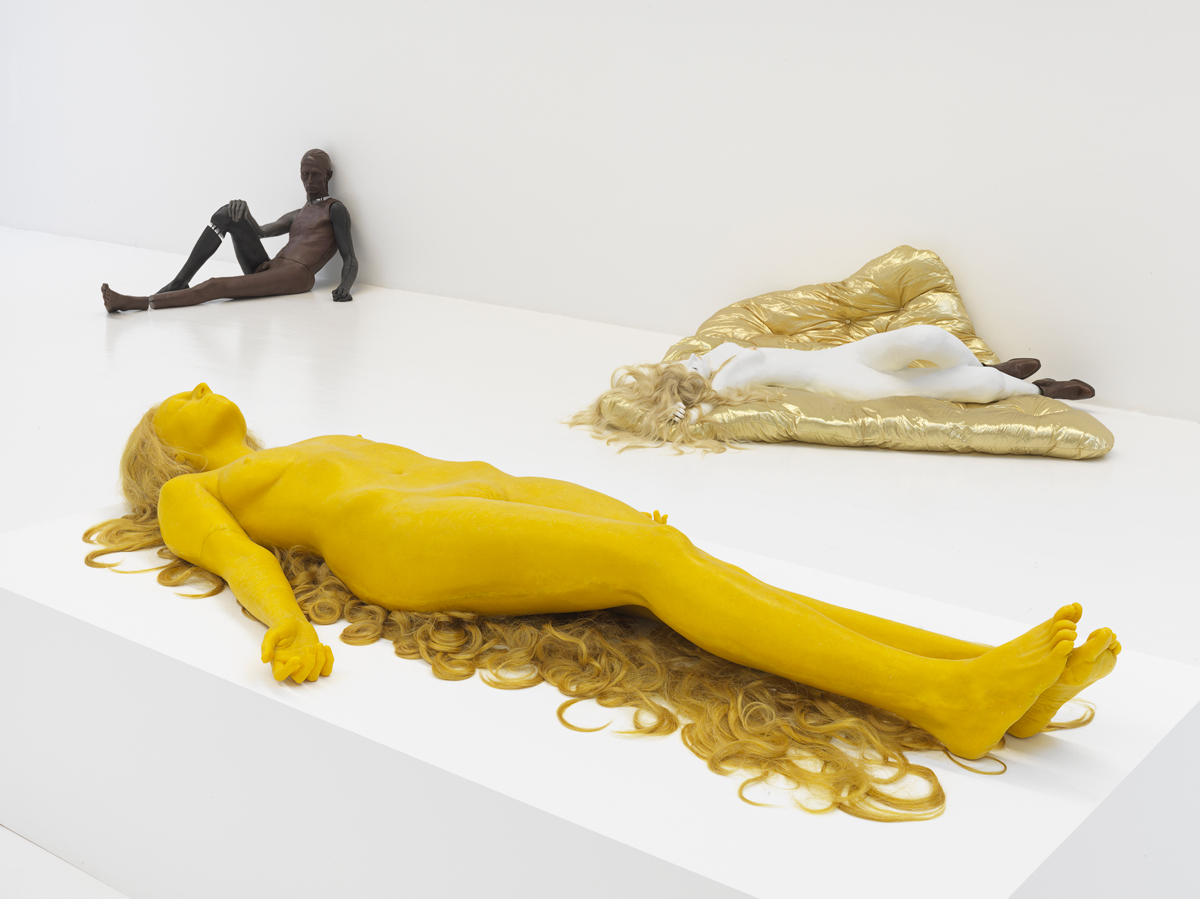 In many ways, these two sculptures  are a world away from the Venus, the Spear Bearer, and Donatello’s St. Mark. In most of the works in “People,” the vague crudeness of the Paleolithic Venus has been refined; the certainty and optimism of the Spear Bearer are more muted; and the heroism of St. Mark, who speaks the word of God, has been replaced with a humbler sort of confidence. These qualities in new figurative sculpture are perhaps the natural outcome of a complex, pluralist society that has no single guiding light. We benefit from this lack: To the credit of the artists of our time, none of the brilliant works in this exhibition, in all their tremendous diversity, would have been imaginable until very recently. Our curiosity about one another’s perspectives and peculiarities seem never to have been deeper. At the bottom of that curiosity is a charming and inspiring sort of humanism. Because in the end, “People” is about people, which is what we are all interested in, one way or another.