Pawel Pawlikowski’s Cold War begins with close-ups of folk musicians loudly playing for the camera — a curiously in-your-face way to start such a carefully modulated film of shimmering, classical precision; it’s as if Casablanca had kicked things off with a raucous gypsy band. But this opening also presents a subtle clue to reading the rest of Pawlikowski’s picture. Narratively, the music in Cold War is a means to an end; emotionally, however, it’s everything, often expressing what the characters cannot say themselves.

Something similar could be said for a number of films to premiere in the first half of this year’s festival. As I noted in my review of Gaspar Noe’s remarkable Climax, over and over on Cannes screens, it seems, we’re watching the elaborate dance between music and memory, between emotion and containment, between personal desire and social transformation. One film from the opening days that I missed, Russian director Kirill Serebrennikov’s Leto (Summer), is a straight-up musical biopic about Viktor Tsoi, the underground Soviet rock icon who had a seismic impact on the country’s youth culture in the early 1980s. (Serebrennikov himself isn’t here; he’s still under house arrest in Russia. His previous film, The Student, which is excellent, is currently available on iTunes; you should see it.)

Pawlikowski’s film also looks at the tension between artists and the state under Communism, though it reaches back a bit further. Cold War begins in 1949, as Wiktor (Tomasz Kot), an urbane, educated musician, travels the Polish countryside with colleagues, putting together a folk ensemble. During auditions, he meets Zula (Joanna Kulig), a provincial girl with a striking voice and a no-bullshit attitude. We’re told that she was imprisoned for stabbing her father; as she explains it, “He mistook me for my mother, and I used a knife to show him the difference.”

Soon, Wiktor and Zula are entangled with each other. But there’s a sublimated quality to their passion: She is preternaturally calm in his presence, while his intent, seductive glances rarely edge into outward emotion. This is, after all, Communist Poland, and sincere feelings, one suspects, are best kept under the surface. As the years pass, and their relationship becomes ever more complicated, music becomes Wiktor and Zula’s bond — an emotional space they’ve created in which they’re able, to some extent, to be themselves. (Late in the film, Wiktor refers to an album they’ve recorded as their “child.”)

The music does the feeling for them — and the music, like their relationship, changes. We have folk chorals that speak of lost loves, sweetly wounded jazz twinkling in French cafés, and the furious, overpowering charge of rock ’n’ roll. The one point in the film where both the camera and the characters let loose, in a frenzy of whipsawing, handheld close-ups, is a sequence in a nightclub playing “Rock Around the Clock” — as a drunken, embittered Zula, frustrated that Wiktor has lost interest in her, throws herself at other men on the dance floor.

The “cold war” of the title may refer to more than the geopolitical struggles of the twentieth century. Wiktor and Zula’s relationship is a war of sorts as well — one in which they battle each other and the world. Pawlikowski refuses to establish the couple’s passion early on, the way a more typical love story might. Instead, he lets us discover it, gradually. In fact, this may be something more than mere love: It’s a compulsion, a codependence, a mutual assured self-destruction. The more we see this relationship, the more its mystery grows. That is the profound, beguiling truth with which Cold War ultimately leaves us. 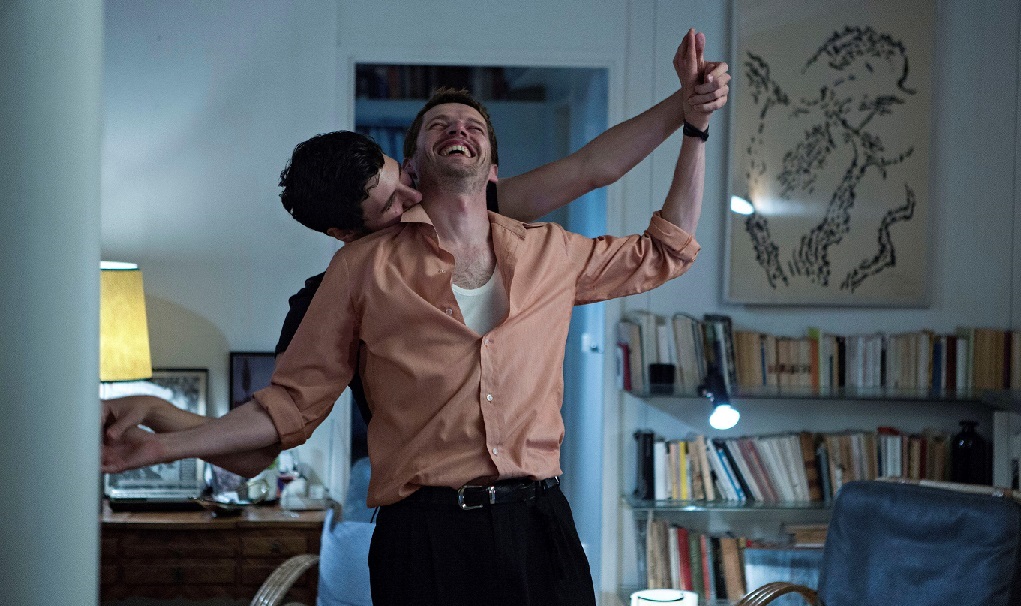 That kind of romantic ambiguity works wonders in Cold War. It is less successful in Christophe Honoré’s Sorry Angel, a decidedly more mixed bag. In previous films like Love Songs and Beloved, Honoré found a way to pay homage to the classic French musical while pushing it in new directions — creating moody, understated romantic roundelays in which the songs served not as showstopping numbers but as recitativo connections between the stories’ emotional peaks. Sorry Angel is not a musical, but at times it feels like it wants to be; I was ready at several moments for characters to burst into song. They do, however, play songs to express themselves, and at times a casual dance might crystallize a relationship dynamic. Honoré still has the soul of a maker of musicals, even if he does seem to be trying to break free of his former style.

Sorry Angel takes place in the early 1990s, and follows the burgeoning romance between Jacques (Pierre Deladonchamps), a 36-year-old gay author fond of meaningless sexual encounters, who falls for Arthur (Vincent Lacoste), a young, idealistic student living in Brittany. As in Cold War, the relationship unfolds casually; it’s not a great, passionate love affair, at least not at first. Jacques may be in his late thirties, but he’s got the soul of a child — irresponsible, petulant, fragile. Arthur, by contrast, mixes a young man’s wide-eyed wonder about the world beyond with a refined wariness: Early on, a girlfriend asks him to spend the night with her; he replies that she doesn’t have any books. This young man has standards.

Honoré’s scenes feel at once composed and curiously mundane, as if he’s trying to take the precision of his earlier work and mix it with a more realist impulse — or, if we’re being less charitable, as if he’s trying to will his aesthetic into something more “mature.” This occasionally does pay dividends: Sorry Angel is filled with moments of genuine, lived-in tenderness. Ironically, they often involve secondary characters in the film: Jacques’s upstairs neighbor Mathieu (Denis Podalydès), a newspaper journalist whose relationship with him seems to alternate between avuncular concern and domestic ease, or Thierry, a former flame of Jacques’s with AIDS who has nowhere to go, and whose grim, dying presence serves as an existential warning sign for Jacques.

This uneasy stylistic blend lends a disjointed quality to the film that prevents it from fully coming alive as we lurch from incident to incident. As a result, the main relationship between Jacques and Arthur feels curiously inert. In some ways, I’m happy to see Honoré trying to move out of his comfort zone and expand his palette. But it’s also hard not to feel like something has been lost. Watching Sorry Angel, I found myself longing for the dreamy melancholy of Beloved, Love Songs, or Dans Paris.