Among many other things, The Last Jedi gave Mark Hamill a chance to give one of the best performances of his career — portraying an embittered, broken Luke Skywalker lost in regret and angst. It was quite a revealing performance, and one that seemed to speak not just to Luke’s troubled journey in the movies, but also to Hamill’s own interesting path through stardom. So, we decided to offer up this treasure from the Village Voice archives. It’s a 1977 profile of Hamill, written by Tom Nolan, in the early days of the original Star Wars’ runaway success. In it, he talks about how his life has changed, how much he admires his co-star Harrison Ford, how George Lucas seemed to be tinkering with the movie even after its release (“he’s gonna fix up Star Wars after it’s already opened!”), and the most famously whiny first lines of a sci-fi hero in movie history.

“Yes, could you send up another bottle of that Don…Perigrom?” the handsome young man in the Unemployed Artist T-shirt asks into the telephone. “All right,” he tells room service, “switch to hyperspace!”

Mark Hamill, 24-year-old veteran of the Hollywood acting wars and humanoid star of the biggest entertainment phenomenon since Jaws, plops his short, tired frame onto his bed at the Beverly Hillcrest, where he and his two Star Wars costars are being treated to expense-account living during a week of hectic interviews. This day alone he has filmed 37 TV shots for shows all across the country. “I felt like a computer. ‘How has this changed your life?’ Zzzt. ‘Is George Lucas really shy?’ Zzzt.

“How has this changed my life? I’m ordering $43 bottles of a champagne I can’t even pronounce!” Mark, who worked his way quickly through the ranks, from soap operas through commercials to TV series to the big break in features, now sits on the mixed blessing of being Luke Skywalker, instant celebrity. He is facing the future with the same bubbling enthusiasm that has seen him this far.

“I remember being back in Africa, filming the first line I say in the movie. I’d said to myself, remember, you have to go way up in this scene so that in the middle of the movie you can start to make your transition, from a wormy guy down to someone halfway human. So, out comes this singsong falsetto: “But I was going into Talshi station to pick up some power converters!” Aaargh! It made me ill! I swear, I thought I was gonna throw up the first time I saw it. But I’ve seen it four times now, and each time I like myself better. I like myself for about 30 per cent of it. I think I fit in. I do.

“Harrison is per-fect! Harrison, of all the humans, comes closest to stealing it. When I heard him say, ‘Keed — I been from one sida this galaxy to the other —’ I said, oh jeez! this guy…he has every good line. It killed me! Him and Threepio. I’d say, can’t I have one joke, George? Just one?”

Mark does a fine, slow, Harrison Ford drawl as he describes their first meeting in Tunisia. “He says, ‘Sooo, kiiid, wadya…think a this…fuckin’ movie we’re in…’ I’m all, ‘well, gol-lee! hey!’ He goes, ‘Just…calm down, keed…’ The big brother! Perfect! Does George Lucas cast exactly right, or what? He gets so close to what he wants, he doesn’t need to get into any big editorial conferences. His biggest direction to me was, ‘Faster. More intensity’.”

Mark signed on for a Star Wars trilogy. “Supposedly, the last one comes out in ’83, when Luke Skywalker definitely will have crow’s feet. I’ll be limping around, my landspeeder will have training wheels. They cast me as a kid, to grow into Luke the man, right? But…this is it folks. This is as tall as I get! I’m in big trouble…”

Meanwhile, he’s set to do Stingray, a film by Matthew Robbins and Hal Barwood, authors of Sugarland Express. “If I can’t pull off a real interesting character kinda thing in that, it’ll really blow my career away. It’s like, ‘Okay — what can he do without the special effects?’ I don’t know. I’m real scared of it. The script’s over there, on the desk. I should be doing homework. It’s gonna be hard. And scary. Real scary.

“People say to me, why are you doing that movie? Car movies never make money; they’re too esoteric. But the two guys, Robbins and Barwood, are so great, they’re just like little kids. ‘Hey, we’re makin’ a moovie!’ And there just aren’t that many parts for guys my age. When you get a break like Star Wars, you don’t want to screw it up, do Trip with the Teacher or Crown International.

“It’s weird. Stuff can get to you. Brian De Palma…I shouldn’t even say this…I heard he said, if I were on fire, he wouldn’t piss on me. And I got real depressed. Because I like his films, you know?” He describes a misunderstanding that led to his being snubbed by another director, an old friend from TV. “It made me feel real creepy. You can’t…it’s not like high school anymore. You can’t keep your friends; not in this business.”

The telephone rings. Someone from the studio is lining up more media shots for Mark. “Should I do all this stuff?” he asks the caller. “Am I overexposing myself? I want to know! Everybody said, what a fool you are to do Dinah, Mark, and why Merv Griffin? You know who we almost got booked with, and I would have destroyed my career? Julie Nixon Eisenhower! I know, I would have been sure to say something foolish…I would love to do the Carson show! But no guest hosts, no David Brenner — I want to see the Man.… Okay, I’ll call you Monday! Fabulous! That’s our new word these days! Fabulous!”

Things were not so fabulous a few months ago, when, distraught over a prior commitment to play in a series for ABC, which threatened to destroy his career momentum, Mark cracked up his car on the Antelope Freeway. The accident got him out of the series, but the price was nearly ultimate.

“I don’t remember any of it. Don’t even remember getting into the car. I woke up in County General. There’s a guy moaning next to me, and some intern says, ‘We’re gonna take him next because he’s in worse shape than you are, and you’re in pretty bad shape,’ and he holds a mirror up to my face and…it looks like a raspberry pie. My nose was off. I didn’t have a nose, it was just gone; later they took cartilage from my ear to build it back up.

“I went to the premiere. I still had a bandage on my nose. Kids came up to me and asked what happened. I said, ‘A little trouble with the light saber in the fourth system.’ They go ‘Wow! You gotta be careful, huh Luke?’ ”

The last of the Dom Perignon is gone; it’s time for dinner. Mark and six others head down to the dining room of his hotel, where folks like Patty Hearst and the prime minister of Granada come to get away from it all. For the aperitif, it’s more Dom Perignon.

“This is the last bottle you have? Bring it! We want everything!” And, during an exquisite meal, we talk Star Wars, Star Wars, Star Wars — just as others in restaurants all over town, all over other towns, are talking Star Wars. How the movie made a quarter million the first day. How great Alec Guinness was. How George Lucas deadpanned that his next movie was going to be a students’ film, 16mm, amateur actors — he’d never get involved in anything large scale again! “Perfect!” Mark says every few minutes, positively exultant.

“The very night it opened,” he says, “my phone rings at, like, 10 o’clock. This voice says, ‘hyah kid. You famous yet?’ ‘Who is this?’ ‘It’s George. You famous yet?’ Think you can come in and loop a couple lines?’ I say, ‘George, it’s opening night! All over town! Wake up, big guy!’ He says, ‘You don’t understand. We’re doing the monaural mix tonight. We’re gonna clean up some of the dialogue. The monaural mix is gonna be even better than the stereo!’ I mean…he’s gonna fix up Star Wars after it’s already opened! I say, ‘Well, I don’t drive anymore. If you send a car over, I’ll be right there.’

And Mark Hamill signs the $200 tab for dinner — “thank you, Twentieth! Thank you, George!” — as happy as the man who fell to earth. 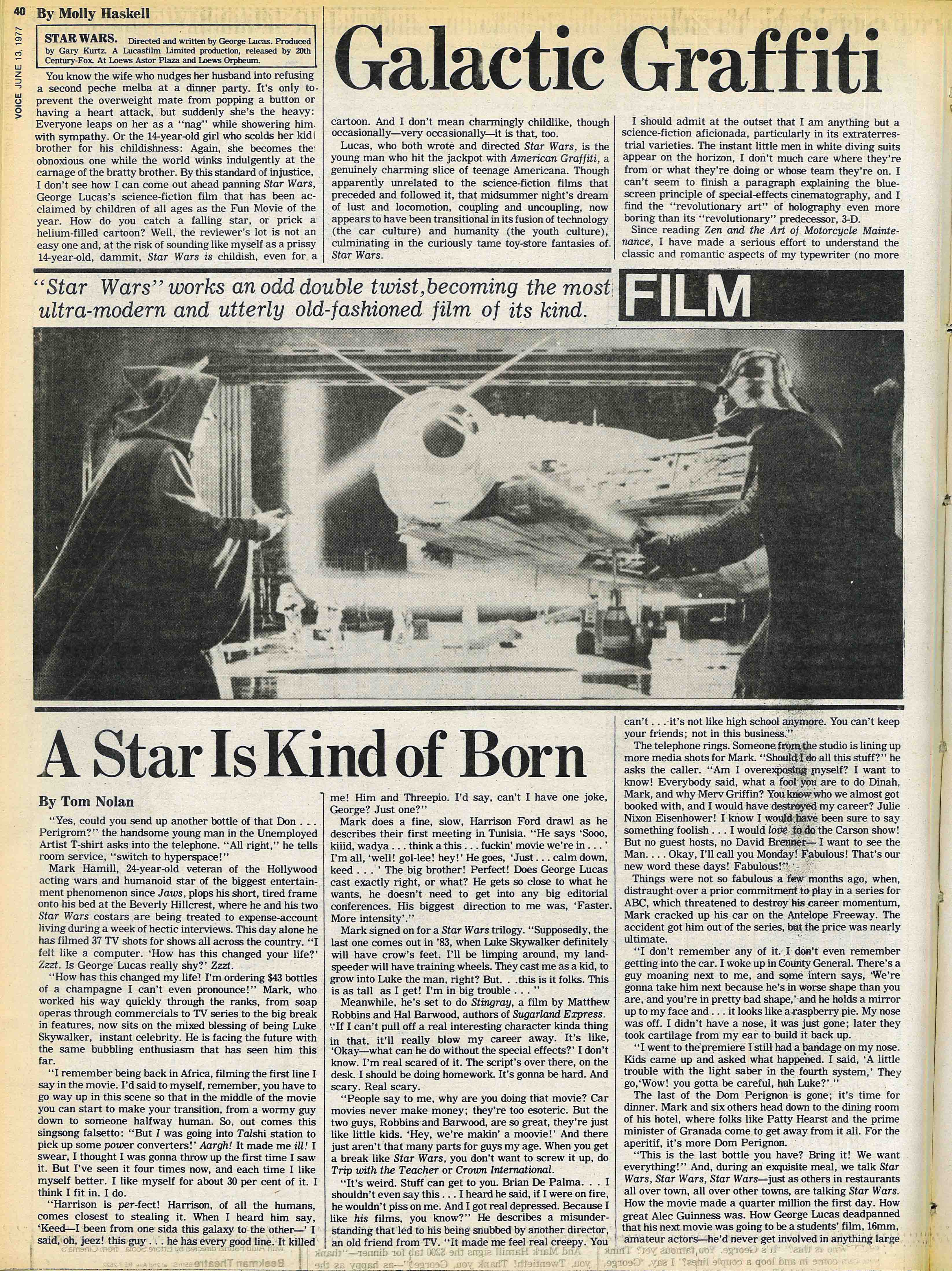 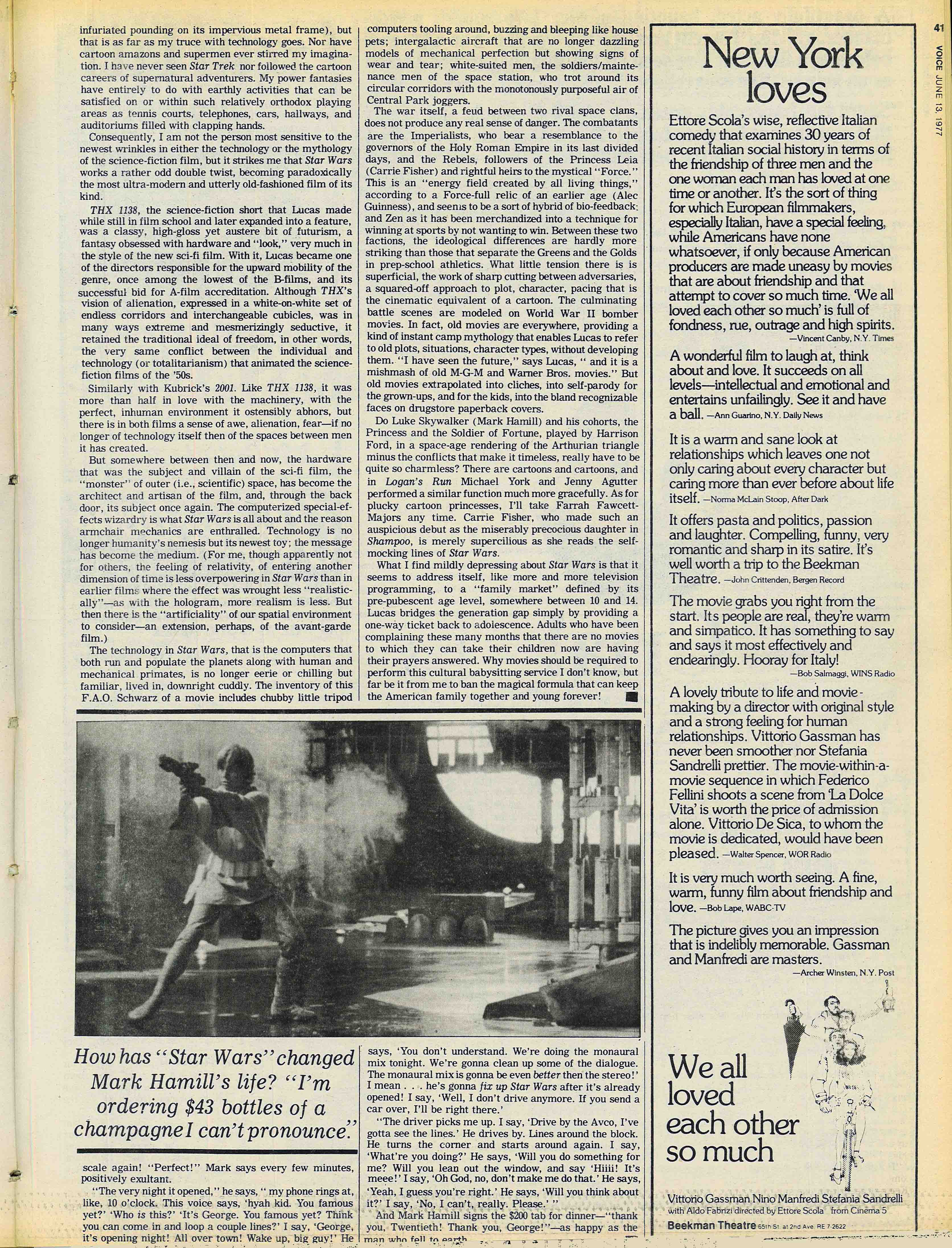