In September of 1964 the serendipitously named Fact magazine presented readers with a series of articles under the heading, “The Unconscious of a Conservative: A Special Issue on the Mind of Barry Goldwater.” The cover was even more emphatic, blaring, “1,189 Psychiatrists Say Goldwater Is Psychologically Unfit To Be President!”

Goldwater, the Republican candidate for president, was outraged, and eventually won a substantial libel judgment against Fact. But this was cold comfort considering his landslide loss to Lyndon Johnson. The archconservative’s legal victory did, however, chastise the headshrinkers, whose professional association ruled that, going forward, no public figure could be diagnosed long-distance. The “Goldwater Rule” decrees, in part, “it is unethical for a psychiatrist to offer a professional opinion unless he or she has conducted an examination [of the subject] and has been granted proper authorization for such a statement.”

That a World War II vet and two-term United States senator from Arizona could be judged unfit to be commander in chief seems a quaint notion in contemporary America, led as we are by a businessman with a checkered financial history and zero government or military service. But there have been earlier questions about presidential competence. In 1987, according to the PBS program American Experience, incoming White House chief of staff Howard Baker was told by his predecessor that President Reagan was “inattentive, inept,” and “lazy,” and that Baker and his staff should consider invoking the Constitution’s 25th amendment. This stipulates, in part, that the vice president can become “Acting President” if he and a majority of the cabinet believe that the commander in chief is unable “to discharge the powers and duties of his office”— whether due to insanity, paranoia, debilitating disease, or what have you. However, the Great Communicator impressed his new chief of staff with sunny banter, and Reagan finished out his term with high public approval ratings, only to be diagnosed with Alzheimer’s disease in 1994.

Today, a much more public debate rages between psychiatric associations as to whether the Goldwater Rule should be lifted to enable professionals to probe the motives (and manias) of President Trump.

Recently, a group of concerned mental health professionals created an organization, Duty to Warn, that flouts the Goldwater Rule. Their homepage boldly proclaims them to be “an association of mental health professionals (and other concerned citizens) who advocate Trump’s removal under the 25th Amendment on the grounds that he is psychologically unfit.” The Duty to Warn group has also sponsored a newly released book, The Dangerous Case of Donald Trump: 27 Psychiatrists and Mental Health Experts Assess a President.

As America’s professional mental health experts continue to fight over the efficacy of a long-distance diagnosis of the POTUS, we do have an earlier example of an astral-couch session with another teetotaler of authoritarian bent — Adolf Hitler — which can perhaps give us insight into our current situation.

In late 1943, psychoanalyst Walter C. Langer was commissioned by the Office of Strategic Services to gather a team of compatriots and plumb the workings of the volatile Führer’s mind. A number of typos betray the haste under which “A Psychological Analysis of Adolph Hitler: His Life and Legend” was compiled — in 1943, victory for the Allies was far from certain and Franklin D. Roosevelt’s government was seeking any way possible to divine what the madman across the water might do next. Despite often misspelling the subject’s name (“Adolph” rather than the correct “Adolf”), Langer and his team accurately predicted a number of Hitler’s moves as the war went south for him, including his suicide in Berlin as the “1,000-year Reich” collapsed, having lasted not much more than a decade. (They also spent quite a few pages speculating on rumors that Germany’s supreme leader was fond of having women urinate and defecate upon him.)

The report includes quotes from the Führer himself and others, as well as analysis from Langer’s team. Following is a sampling of Langer’s findings reproduced directly from a version of the report available on the CIA’s website (which is more legible than Langer’s hastily typed original). Also note that, where unattributed, the quotes come from Hitler himself. 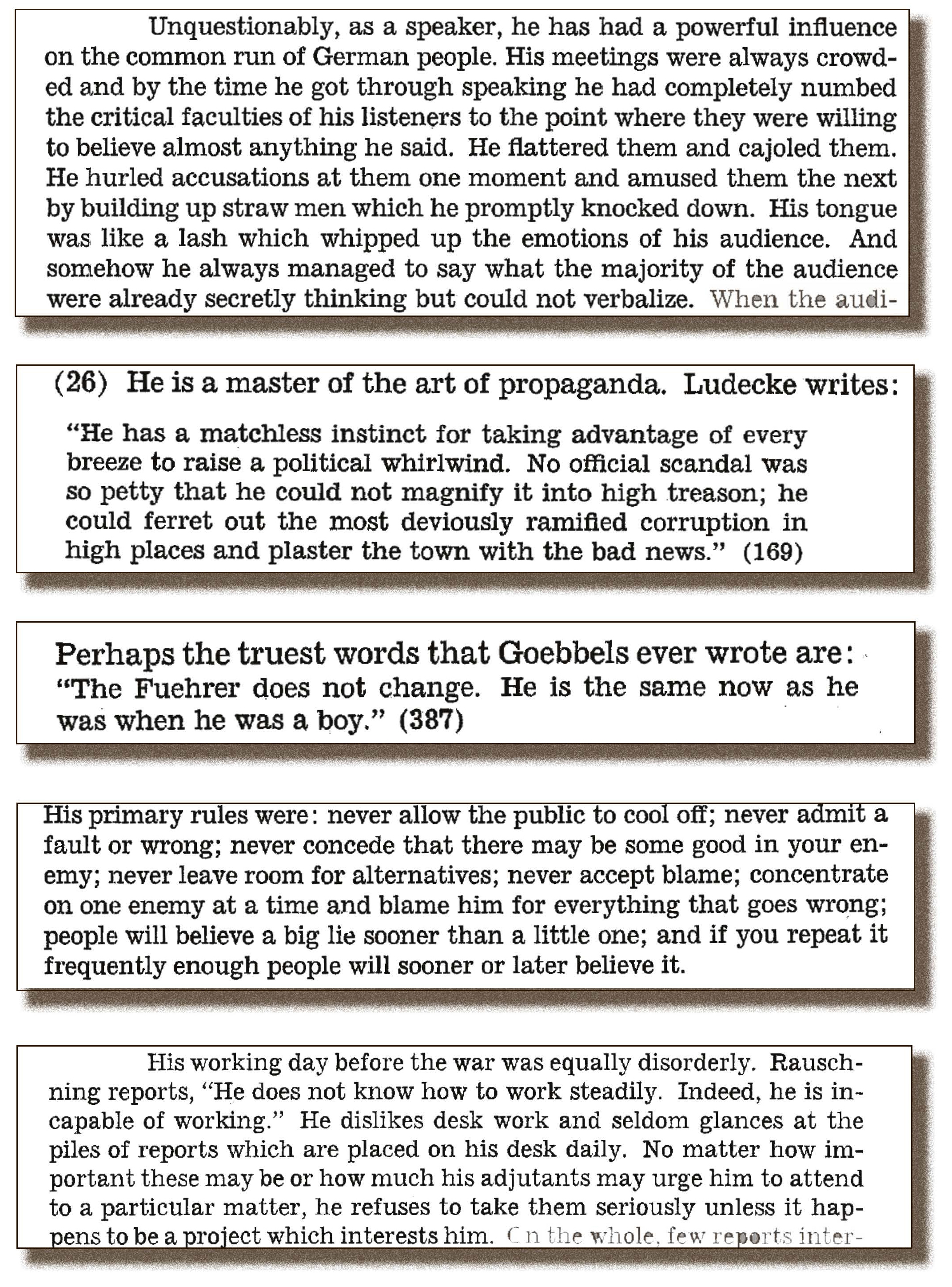 Perhaps the most curious change comes in the report’s final paragraph. First, we have reproduced the CIA’s version, followed by Langer’s original typescript. 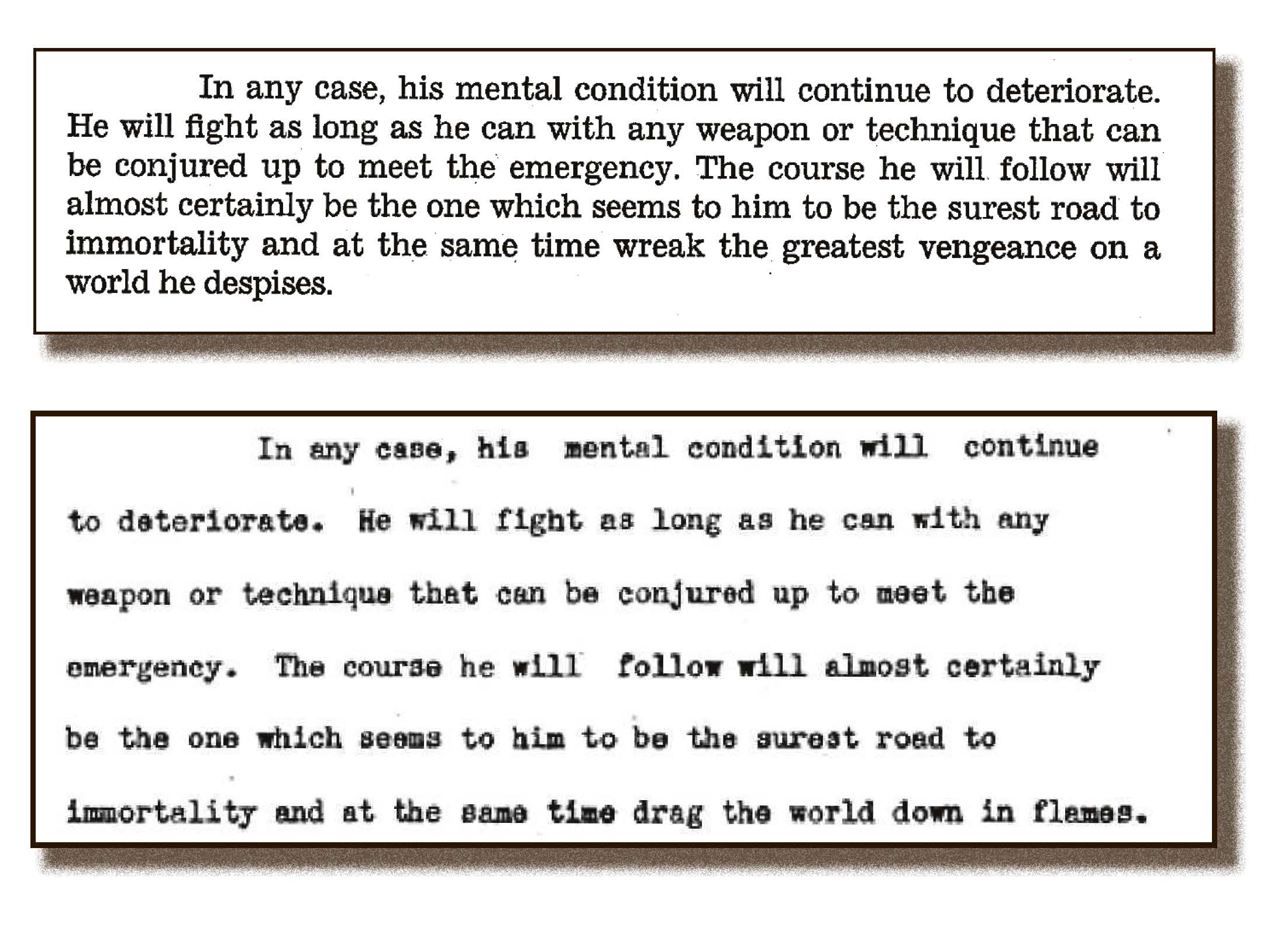