By Monday, the situation in Puerto Rico had gotten so dire that Kirsten Mercado was looking to hire a helicopter.

Mercado, a social worker who lives in East Harlem, said her family had run out of drinking water and was rationing the little food they had left. The road to their home in Orocovis, a town in the middle of the island, is impassable, she said, and a bridge connecting to the road had washed away.

“I’m seriously trying to find a way to get a helicopter to them,” she said. “My mother has satellite internet, so she was able to message us via Facebook. But her generator is running low, so she hasn’t been online since yesterday.” She said her family saw a helicopter pass overhead at one point, but weren’t sure if they’d been able to signal to it, “which only made them more desperate.”

Having enough medicine to last for the immediate future was another worry. Mercado’s mother, who is in her mid-50s, has a thyroid condition and had bypass surgery a few years ago; her stepfather is hypoglycemic; and her 78-year-old grandmother is diabetic. Her father, meanwhile, lives in Humacao in the southeastern part of the island, a place he told her had suffered “total destruction.”

“Years ago my mother sent me an email with the exact coordinates of her location for just this situation,” Mercado added. “We don’t know what she will do. There’s prayer. That’s about all that’s left.”

It’s been a week since Hurricane Maria decimated the commonwealth last Wednesday as the most powerful storm to strike in 85 years, but the island’s crisis has if anything only grown since then. Most of Puerto Rico’s 3.4 million people are still without power, with no telling when transmission lines destroyed by the storm may be repaired. On Monday, Gov. Ricardo Rosselló ordered the evacuation of 70,000 residents of the northwestern part of the island as the nearby Guajataca Dam threatened to burst and flood neighboring towns.

Meanwhile potable water, food, and gas are scarce across the island. Most stores remain closed, and the ones that have reopened had few necessities, frustrating residents who waited in long lines hoping to purchase milk or bread, according to both New York Puerto Ricans and press reports. Rosselló warned Monday that the situation could reach a “humanitarian crisis” if aid could not be delivered in time.

“Those stores that are open have little to nothing, certainly no water — even all the juices are gone,” says El Puente founder Luis Garden Acosta, who is coordinating outreach efforts from his community organization’s Brooklyn headquarters. “Anything people can drink is gone, and there’s very little food.”

Though international aid organizations have already raised millions of dollars in aid to Puerto Rico — including a $1 million pledge from Jennifer Lopez and a flood of GoFundMe drives — getting food, water, and other supplies to remote parts of the island has been extremely difficult after the storm destroyed roads, power lines, and cell towers. “Basic necessities are basically waiting in warehouses near the airport, but the issue is how to get them to where people need them,” Acosta added. “Some towns are totally inaccessible still.”

Amid criticism from Rosselló and others that the federal government is moving too slowly to provide aid, President Donald Trump announced on Tuesday that Washington would lift regulations requiring Puerto Rico to pay FEMA local matching funds for disaster relief. Trump also tweeted “much food and water” is on the way and promised to visit the commonwealth next Tuesday.

“We’ve gotten A-pluses on Texas and in Florida, and we will also on Puerto Rico,” Trump told reporters. “The difference is this is an island sitting in the middle of an ocean. It’s a big ocean, it’s a very big ocean. And we’re doing a really good job.”

According to Brooklyn Rep. Nydia Velazquez, however, the federal government’s response has been “totally inefficient.” “Crises like this require swift, decisive leadership, and we need the president to finally give this catastrophe the serious attention it deserves,” she said yesterday in a press release. “Lives are on the line. There can be no further delay.”

Senator Kirsten Gillibrand likewise called on her colleagues in Congress to act immediately to provide funding for Puerto Rico. “This is one of the worst disasters our country has ever seen,” she said Tuesday on the Senate floor. “If we don’t give them help now, then many more people there will die – far more than those who were killed during the hurricane itself.”

Since Maria struck the island, Velazquez and other lawmakers have called upon the president to provide a one-year waiver of the Jones Act, a post-World War I law that requires steep tariffs on goods carried by foreign vessels unless they transfer their goods to a U.S. ship in an American port. Waiving the act would allow other nations to provide food, medicine, clothing, and other supplies directly to Puerto Rico. The Trump administration rejected a request to lift the shipping law on Tuesday after several representatives asked the Department of Homeland Security for a waiver.

The hurricane’s destruction has also revived discussions in Washington over whether Puerto Rico’s $70 billion debt could be forgiven so it can begin rebuilding its infrastructure. But Trump tweeted on Tuesday that Puerto Rico’s debts are “owed to Wall Street and the banks which, sadly, must be dealt with,” a statement that made him appear unlikely to consider any forgiveness measures. And Congress remains weeks away from voting on a funding request for aid to Puerto Rico, according to Politico.

In the meantime, New Yorkers are scouring social media and texting family members in Puerto Rico for updates while organizing relief activities. Several community organizations, including El Puente, the Hispanic Federation, Churches United for Fair Housing, and the Center for Popular Democracy are raising money to help Puerto Ricans in need. Gov. Andrew Cuomo, who visited Puerto Rico this past weekend, announced the New York National Guard will collect medical supplies and nonperishable goods around the state for the commonwealth.

Even as they organize aid, organizers worry about future calamities that may be on the horizon.

“Right now the press is there [in Puerto Rico], but in a week from now the reporters won’t be there as people’s groceries may spoil or run out,” says Jesus Gonzalez of Churches United. “There are collection drives all over the place, but do they stay in storage or do they get distributed to towns?”

Gonzalez and other community leaders predict New York could see an influx of migrants from Puerto Rico even after the crisis is under control. “Puerto Rico was already confronting a large exodus of young people,” he says. “Hospitals and schools are closing at a rapid pace because of the debt crisis. We’re probably going to see the largest exodus from Puerto Rico since the 1950s. It’s going to be impossible to survive there.”

“Puerto Ricans are full U.S. citizens — sometimes people forget that,” Espaillat tells the Voice. “They should be entitled to the same treatment that any citizen should be entitled to across the United States. The government has dragged its feet to get aid there on time. This cannot go on another week without a substantial response.” 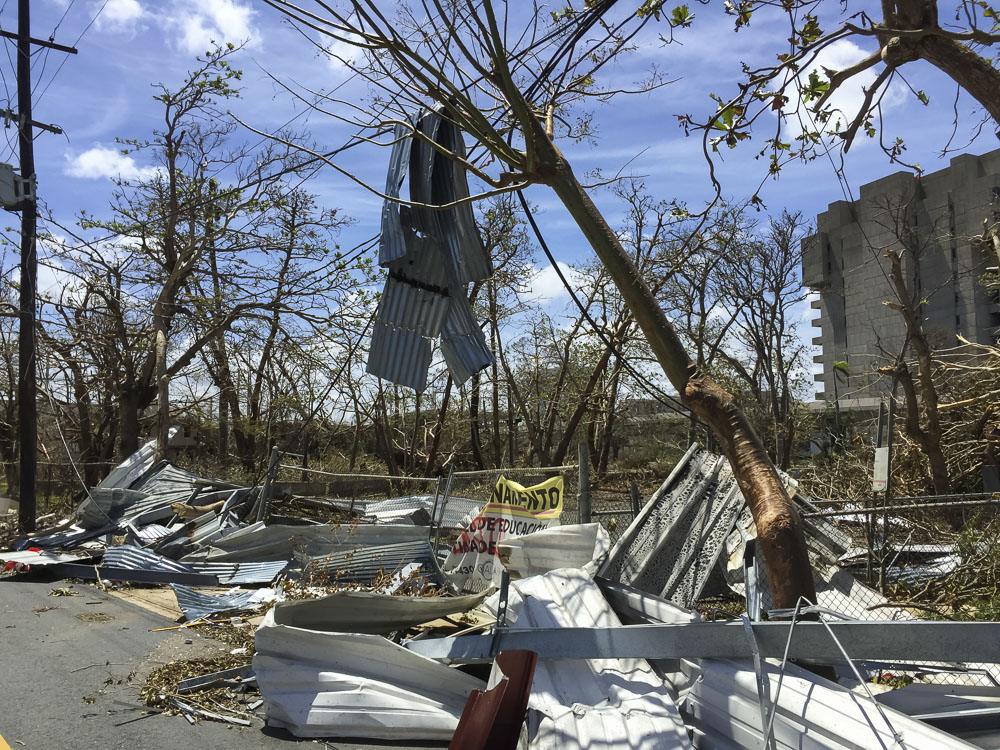 Damage and debris in the Hato Rey neighborhood of San Juan, Puerto Rico. On September 20 and 21, Hurricane Maria sliced diagonally across Puerto Rico, entering with Category 4 winds and laying waste to the entire island. 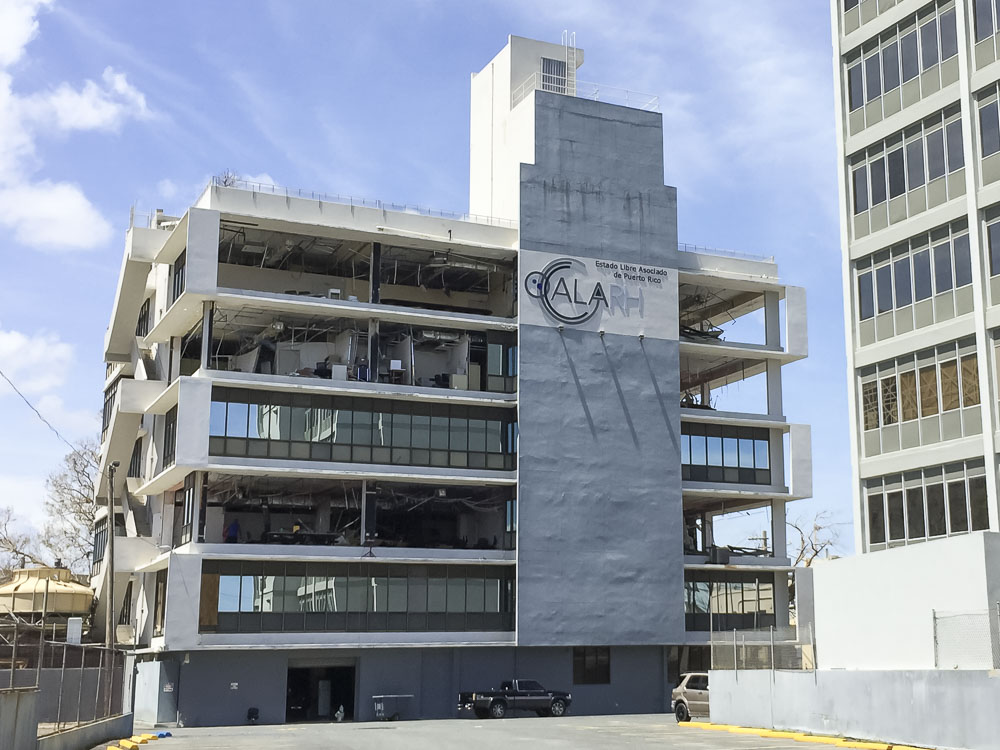 Damage and debris in Hato Rey after Hurricane Maria 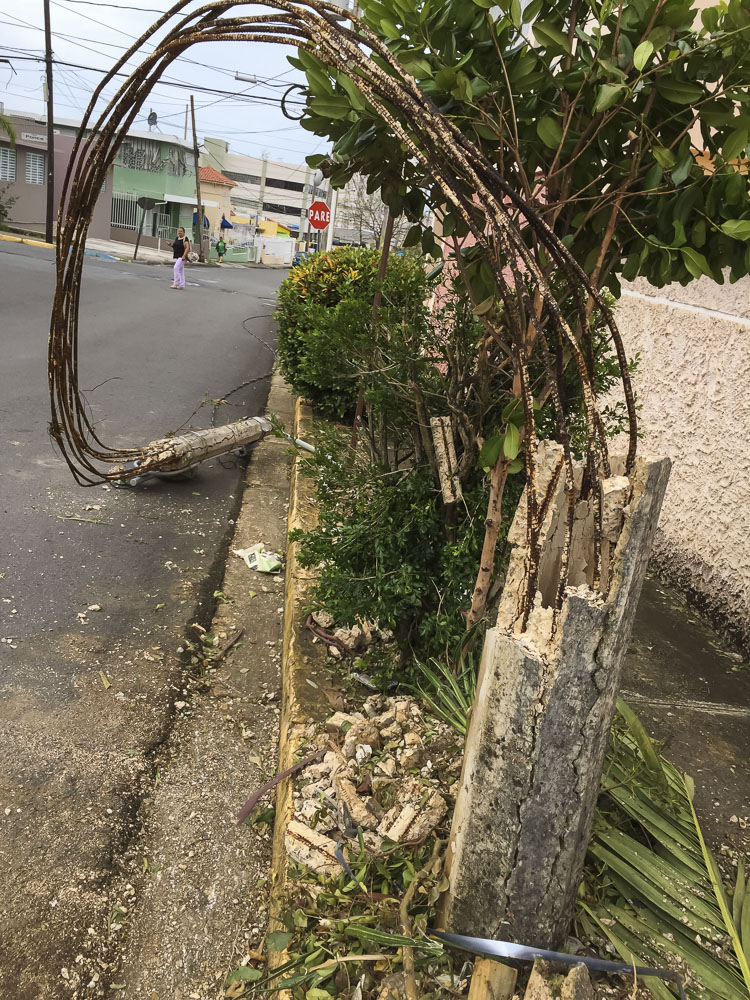 A reinforced concrete post snapped and twisted in Hato Rey. 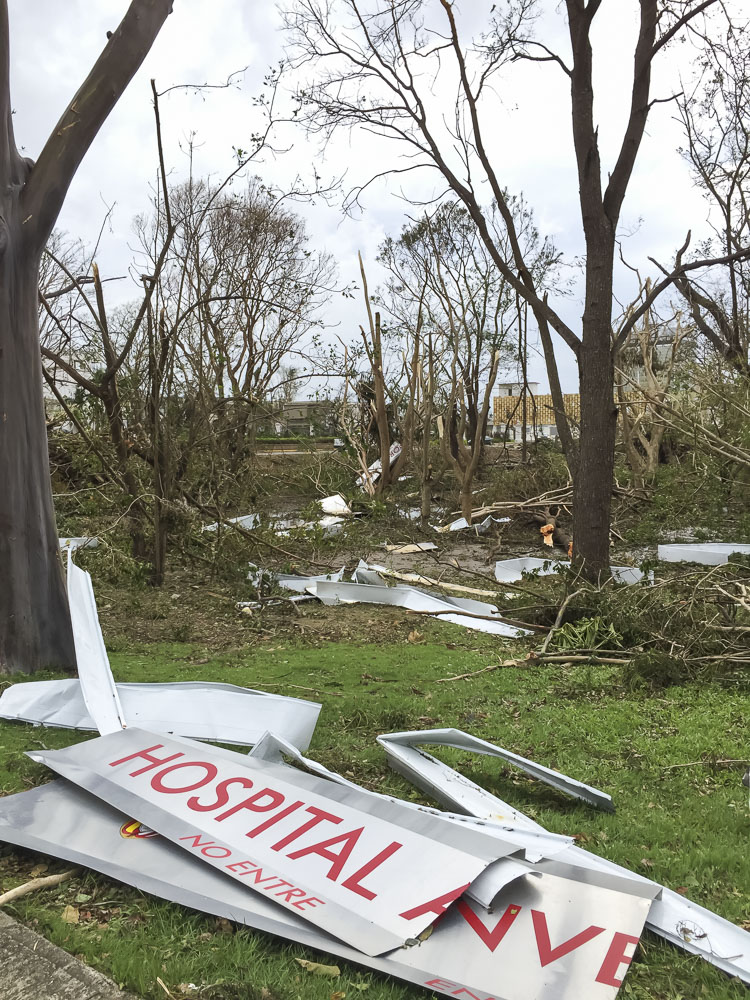 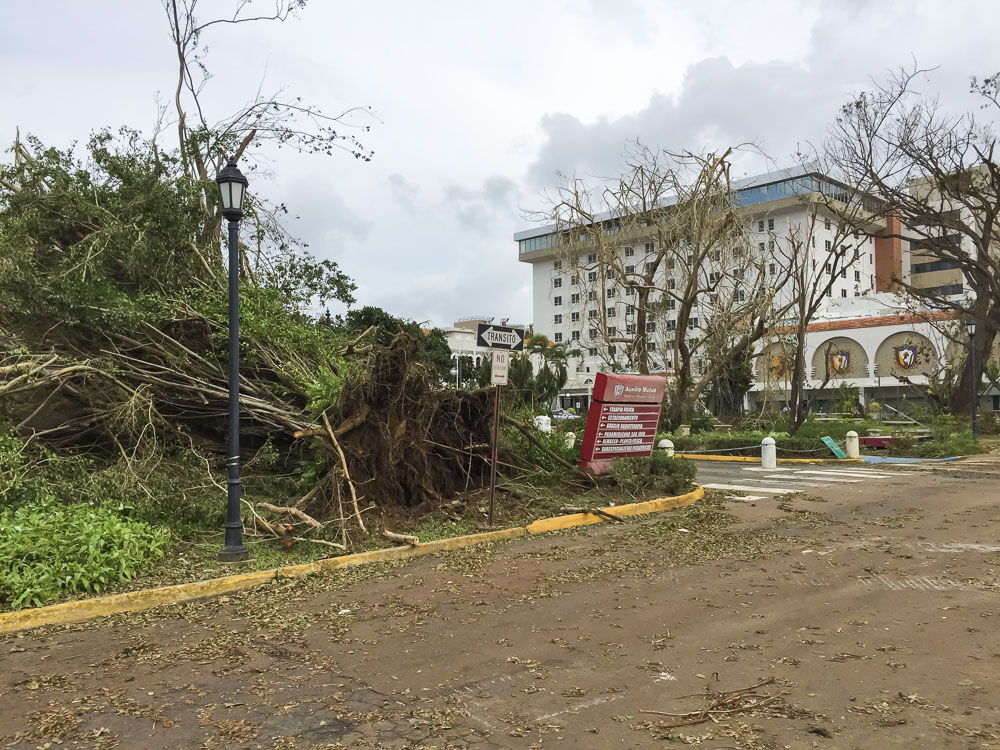 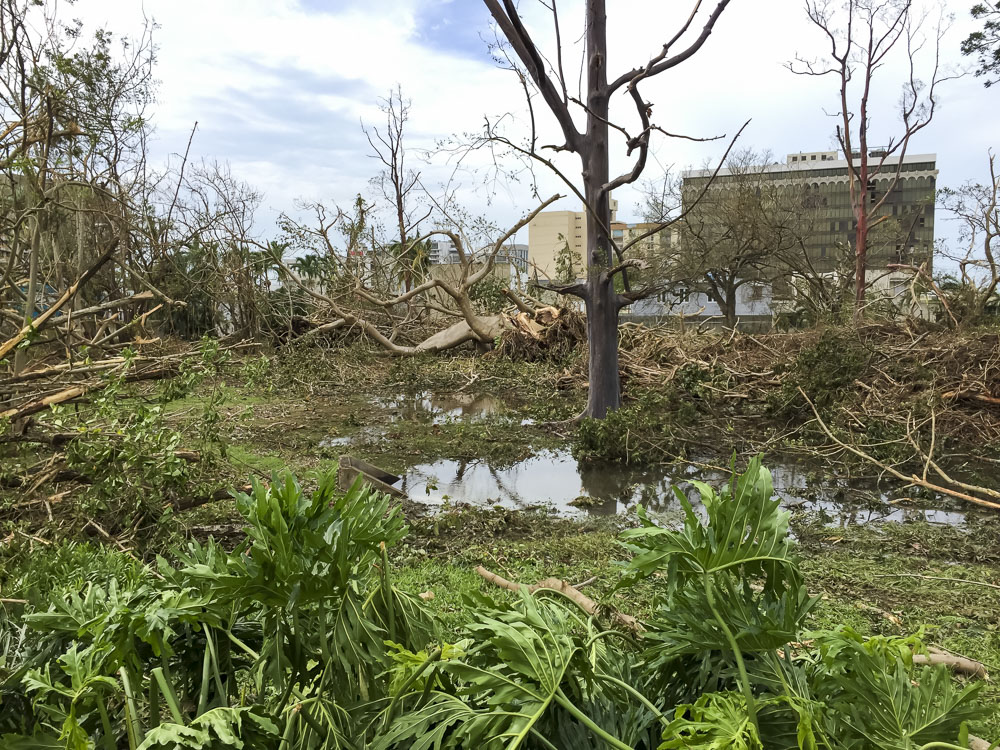 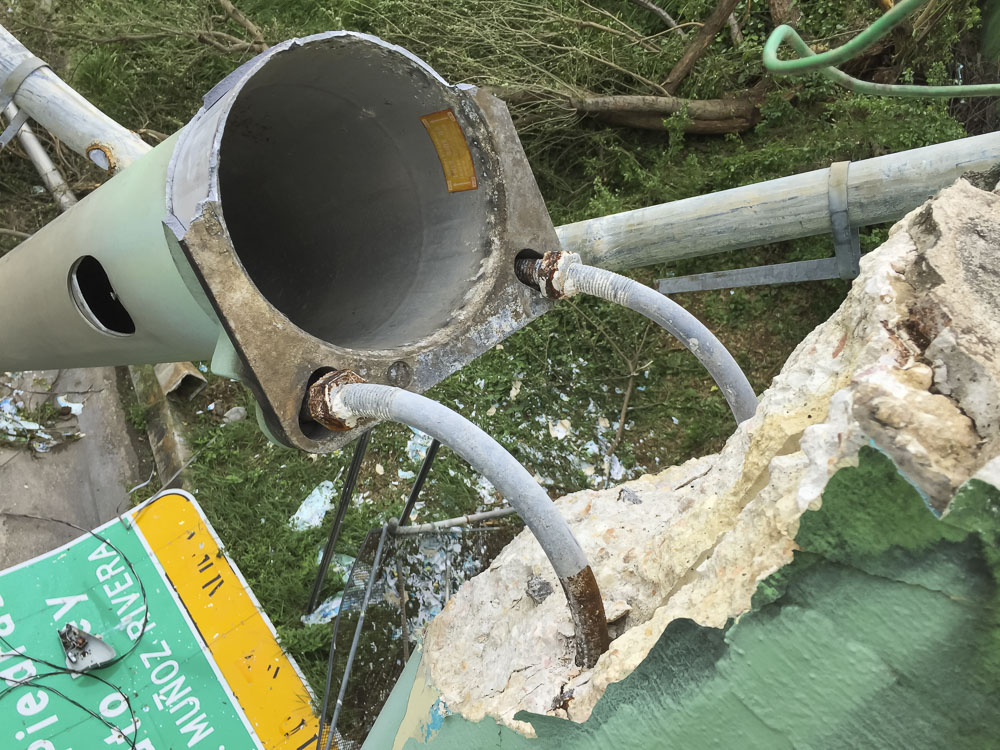 Serious damage to posts, lights, and signage occurred on roads and highways in Hato Rey. 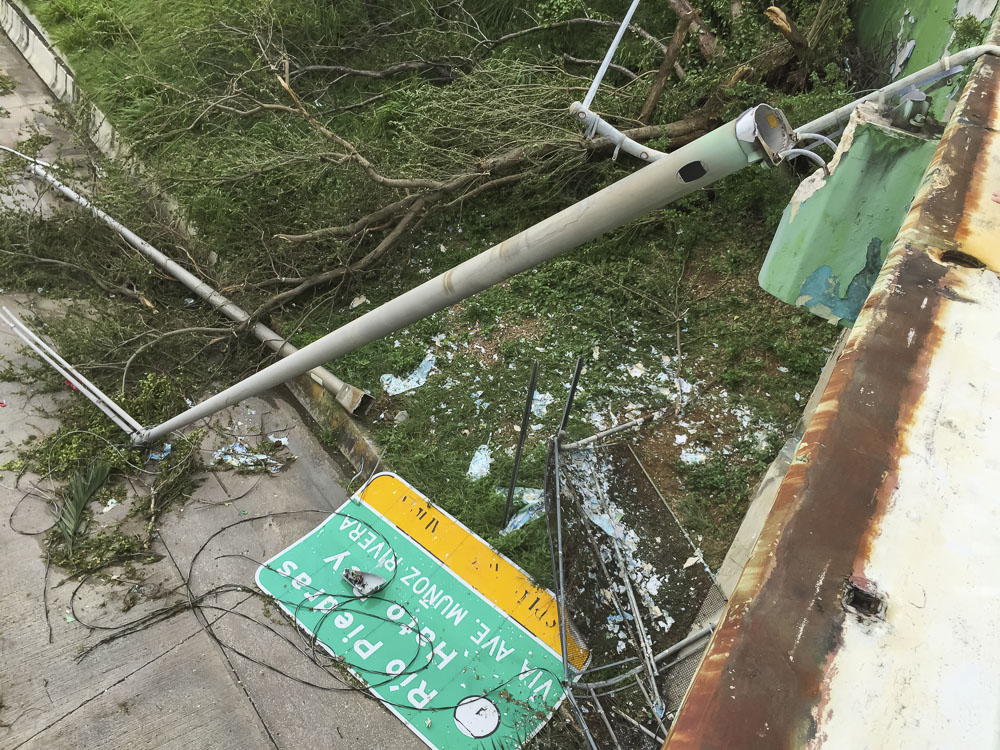 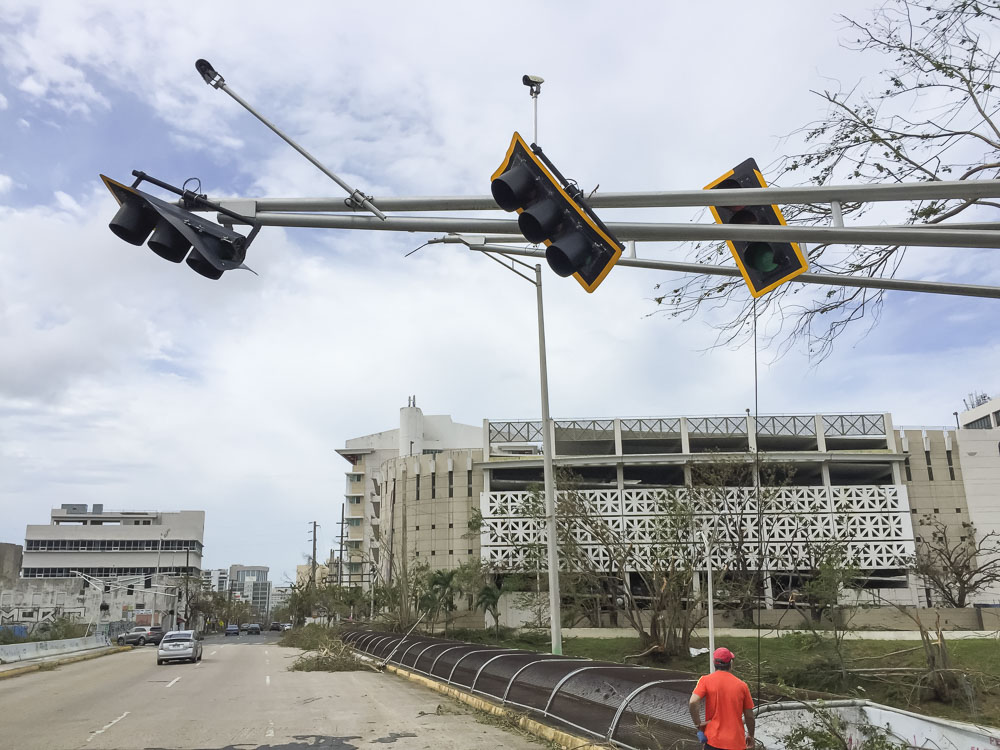 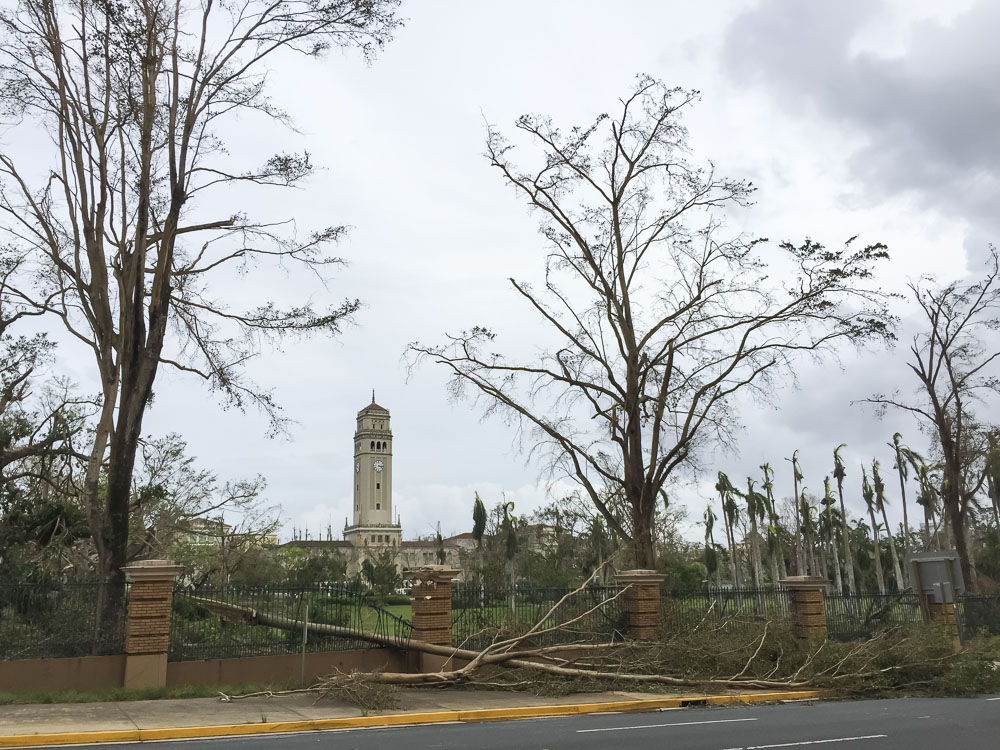 The University of Puerto Rico suffered extensive damage throughout its Río Piedras Campus. 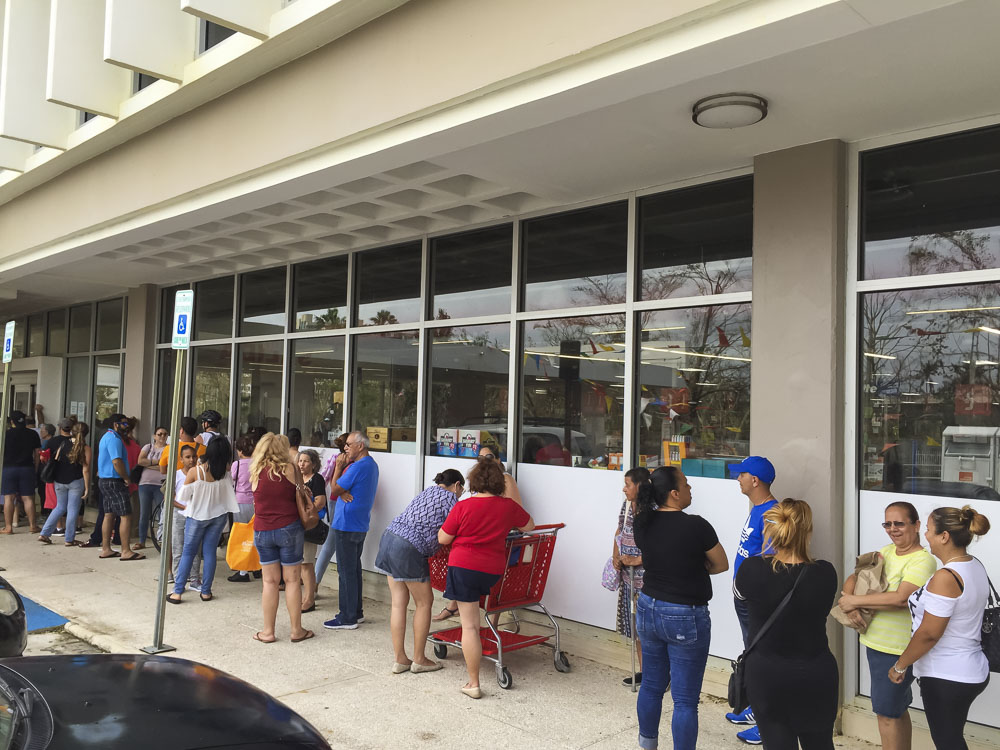 Long lines formed at the few grocery stores that managed to open in the days after the hurricane. 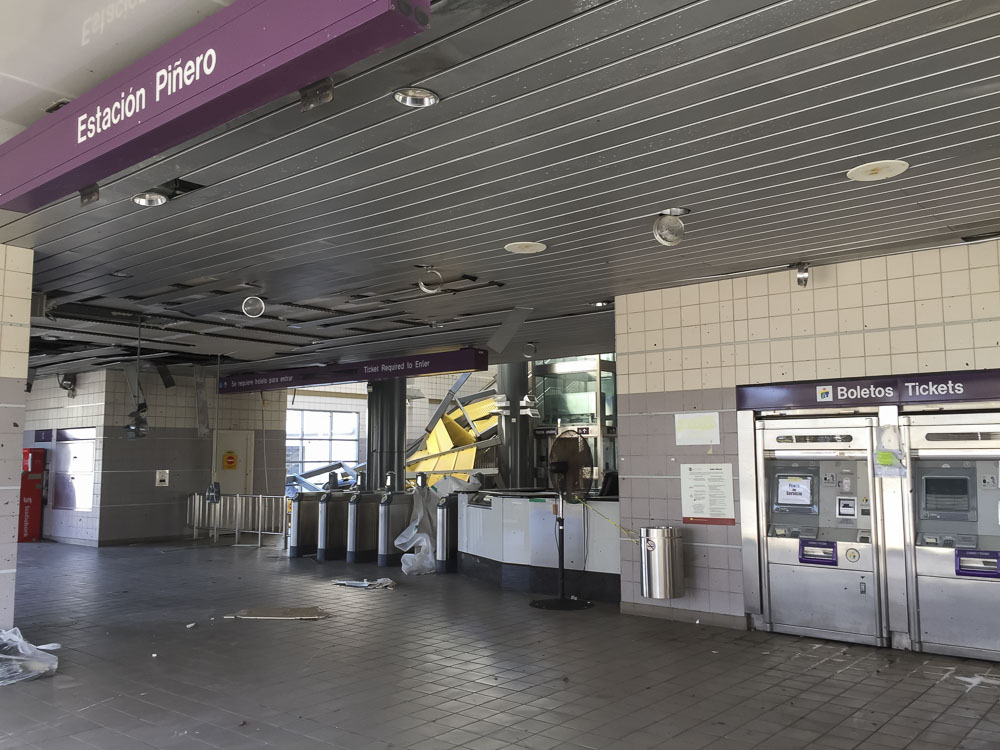 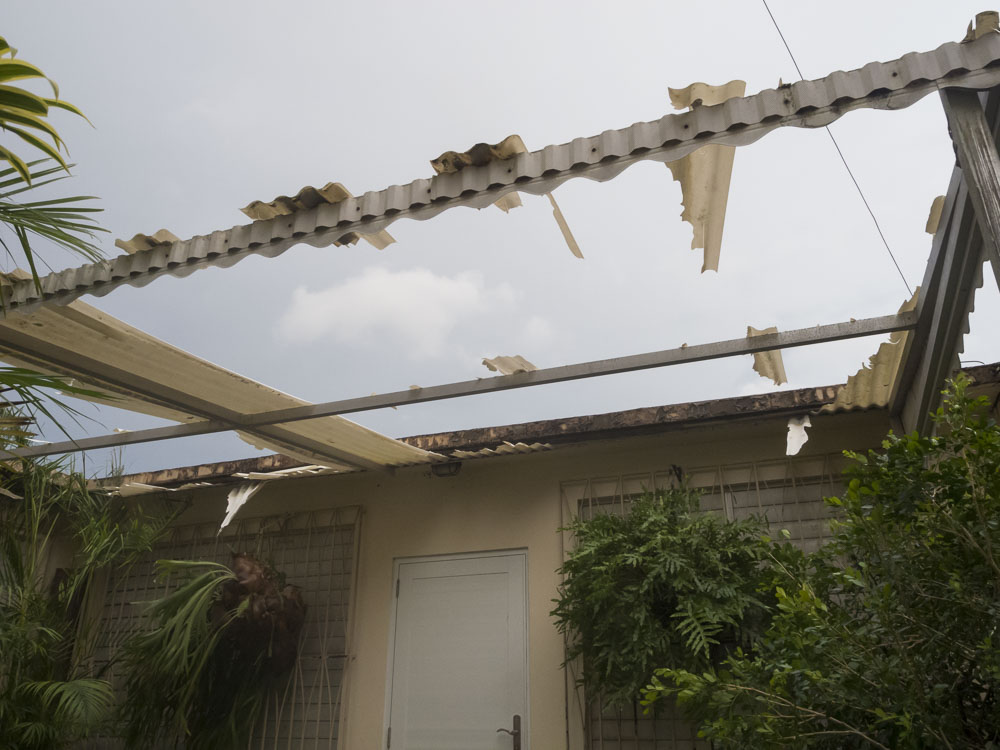 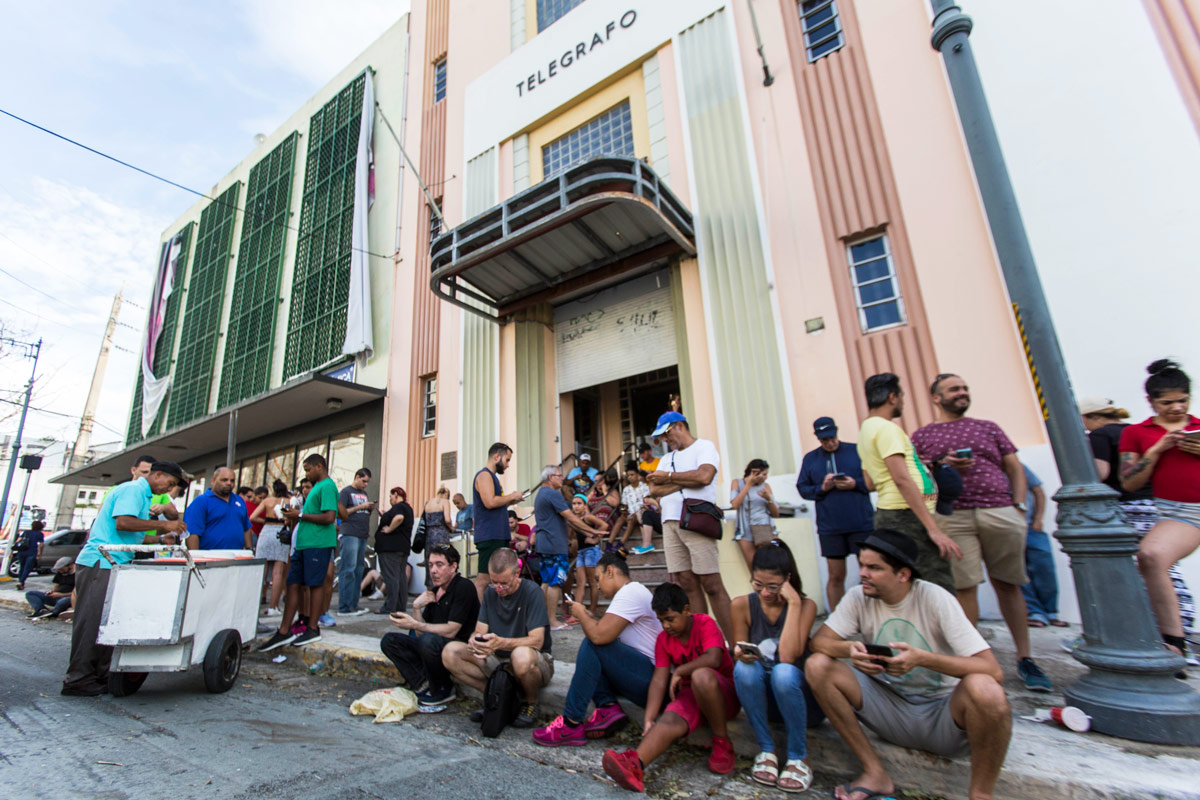 People gathered at the old telegraph building in San Juan on Saturday, waiting to use a rare free Wi-Fi signal. 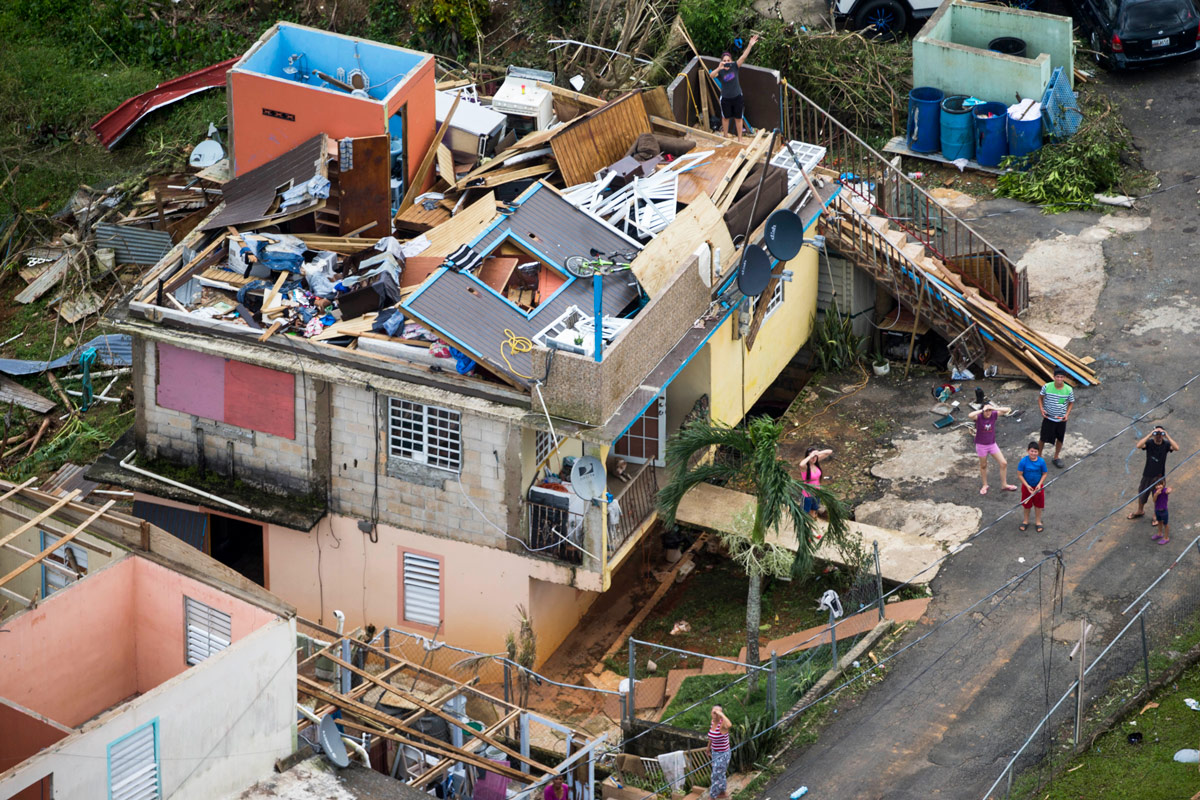 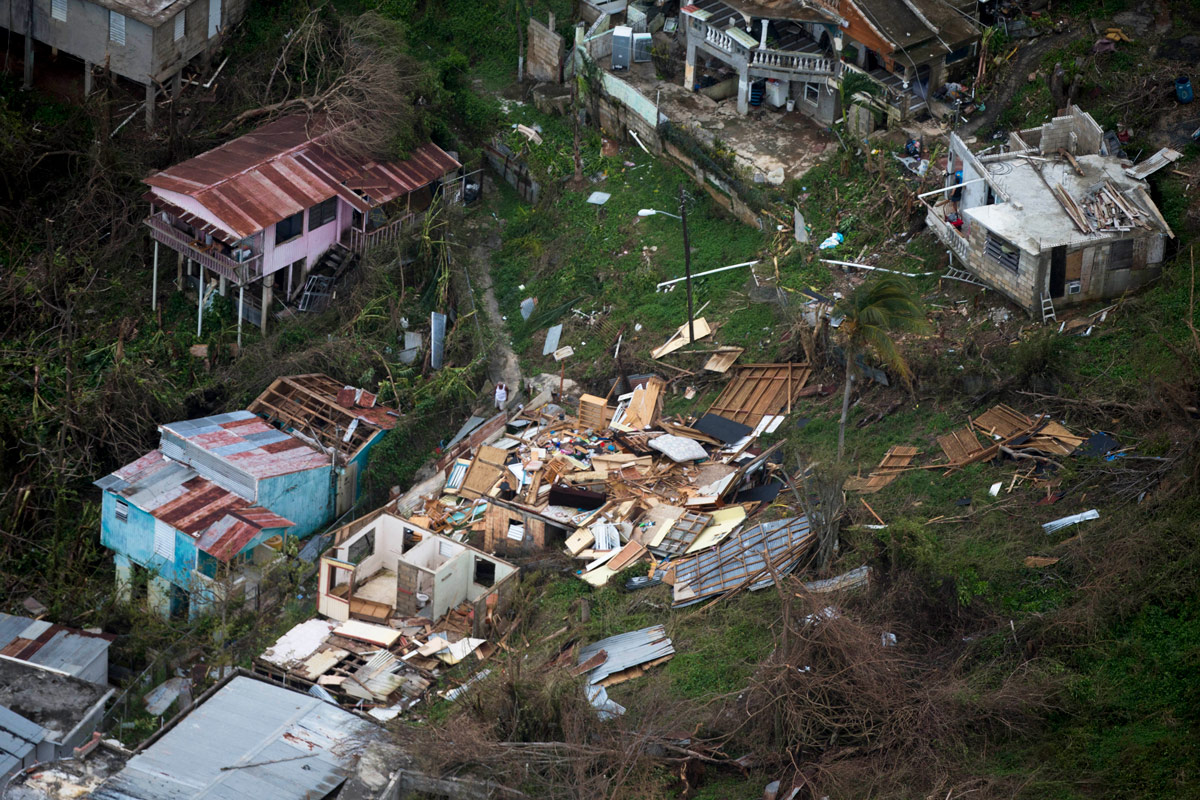