Scenes From a Bloody Weekend in Charlottesville

For Deandre Harris, the details of the attack are fuzzy. One moment, the twenty-year-old aspiring rapper and special-education worker was protesting last weekend’s white nationalist rally in Charlottesville, Virginia. The next, he was on the concrete floor of a parking garage, being pummeled by a group of white men wielding poles, wearing helmets, and carrying shields. “I just came out here to voice my opinion and stand up for what I believe in,” he said the next day, after a photo of the attack went viral. “I don’t believe in that KKK and Nazi shit, man. I’m Black Lives Matter, you know what I’m saying?”

A black man beaten by white racists for standing up for his beliefs. In the half-century since the race riots of the long hot summer of 1967 erupted across America, it seems as if not much has changed. But there are differences. In 2017, emboldened by a president they claim as their own, white supremacists no longer feel the need to hide their faces beneath hoods.

On Friday night, beneath the banner “Unite the Right,” hundreds of white nationalists, neo-Nazis, Ku Klux Klansmen, and members of other hate groups — along with assorted garden-variety racists — began gathering in Charlottesville. Some dressed for battle (military fatigues), others for a hunting trip (trucker caps, camo) or a round of golf (President Trump’s eighteen-hole uniform of white polo, black belt, and khakis). Ostensibly, they were there to protest the city’s removal of a statue of Robert E. Lee. The violence that erupted resulted in at least nineteen people being hospitalized; in two state troopers being killed in a helicopter crash; and in the death of thirty-two-year-old Heather Heyer after a car barreled through a mass of counterprotesters — an incident that even son of the South Jeff Sessions, Trump’s attorney general, has labeled an act of “domestic terrorism.” (At press time, a twenty-year-old Ohio man, James Alex Fields Jr., was being held by police on suspicion of second-degree murder.)

Photographer Zach Roberts had come from his home in upstate New York to document the rally; on Saturday, when he spotted the group of marchers attacking Harris, he had his camera ready. “I saw Deandre run into the parking garage, and I followed him,” Roberts told the Voice. “He’d obviously already been at least hit once because he fell to the ground, and the white nationalists used poles, shields, and their feet to beat him while he was down. He wasn’t even trying to defend himself. He was just literally trying to get up so he might be able to run away.”

In the photo of Roberts’s that later went viral, five men surround Harris as he struggles to escape. The attackers’ weapons blur as the blows rain down.

“I was just fading in and out. I get up again and I try to run, and I fall back down to the ground,” Harris recalled the next day. “I keep hearing all this chaos going around me and I feel myself getting hit, so I try to get up and run but I can’t. Every time I try to get up I just lose consciousness and fall back out.”

Roberts said that the attack happened no more than twenty to thirty feet from the police station but that the authorities “were just nowhere to be found.”

Once Harris found safety in a nearby stairwell, a friend called an ambulance. A gash in his head required eight staples.His wrist had been broken, his tooth chipped, his lip busted, and he had sustained numerous cuts and bruises. “The police didn’t show up until I already got rescued by my friends,” Harris confirmed.

As of Monday, he said that no one from the city of Charlottesville or the police had contacted him about the assault. But thanks to the photo Roberts tweeted Saturday night, Harris’s attackers may yet face justice.

At 3:17 p.m. on Sunday, New York Daily News columnist Shaun King retweeted a post by Yesha Callahan of The Root in which she included the Roberts photo and linked to an interview with Harris. “We must identify these bigots right away. Every person there needs to be arrested. Deandre was brutally beaten by them,” King wrote. His more than 700,000 followers were soon on the case.

King is just one of a number of activists hoping to unmask members of the Charlottesville mob. The Yes, You’re Racist account has been seeking to identify white supremacists since 2012 and gained heightened attention when it began to ID those who had gathered on the University of Virginia campus on Friday might — among them University of Nevada, Reno, student Peter Cvjetanovic, who became the unwitting face of intolerance when a photo of him appearing to angrily shout during the Unite the Right rally went viral. (In an interview with CBS affiliate KTNV in Nevada, Cvjetanovic later described himself as a “white nationalist” who had come to Charlottesville to “preserve what we have.” “I came to this march for the message that white European culture has a right to be here just like every other culture,” he said. A petition has begun to circulate on change.org calling for Cvjetanovic’s expulsion from the school.) Other participants have lost their jobs or been disowned by their families after being identified. But sometimes, the amateur sleuths get it wrong: When Kyle Quinn, an assistant professor at the University of Arkansas, was mistakenly identified as a marcher, he and his wife were forced to flee their home.

While many of these images depicted marchers who could claim to be exercising their First Amendment rights — however racist and objectionable their views might be — Roberts’s photo appeared to capture a felony assault, and the online crime fighters of Twitter rapidly mobilized to crowdsource justice for Deandre Harris. One of the men alleged to be among the attackers, Daniel Borden of Mason, Ohio, was identified on social media by those describing themselves as classmates; they said they’d made the ID thanks to a number of telltale moles on the attacker’s neck.

In the background of Roberts’s photo looms a tall older man with long gray hair and a white goatee. In fact, he turns up in many photos taken over the course of the weekend. On Sunday, King tweeted his image, writing: “We believe THIS MAN is the ring leader [sic] of the violence. We see him ordering it on video. What’s his name? ALL HANDS ON DECK. SHARE!!” Within hours, the man had been tentatively identified as Michael Tubbs, a former Green Beret who, according to the Southern Poverty Law Center, served a four-year prison sentence for planning to bomb Jewish- and black-owned businesses in Florida. Today he is the chairman of the Florida state branch of the League of the South, a neo-Confederate “ethno-nationalist” organization that advocates for Southern secession.

By Monday afternoon, President Trump — whose equivocal remarks on Saturday describing the “egregious display of hatred, bigotry, and violence on many sides” drew an avalanche of criticism from those who saw them as further evidence of his attempts to appeal to, rather than repudiate, white nationalist representation among his base — bowed to the pressure by offering a more detailed statement: “Racism is evil,” Trump said, “and those who cause violence in its name are criminals and thugs, including KKK, neo-Nazis, white supremacists, and other hate groups that are repugnant to everything we hold dear as Americans.”

For Harris, there is some consolation in the possibility that his assailants could eventually be caught. On Monday, King announced a “$10,000 reward for identifying information that leads to the arrests of the men who assaulted Deandre Harris.” And a GoFundMe page to help with Harris’s medical expenses stopped accepting donations after raising over $100,000 in less than 24 hours. But the scars, both physical and emotional, will linger.

“I don’t even know if I’m safe in this town anymore,” Harris said. “My face is all over the internet. What if some KKK people that live in the town see me walking around in the mall or something and attack me there? I could have lost my life yesterday.” 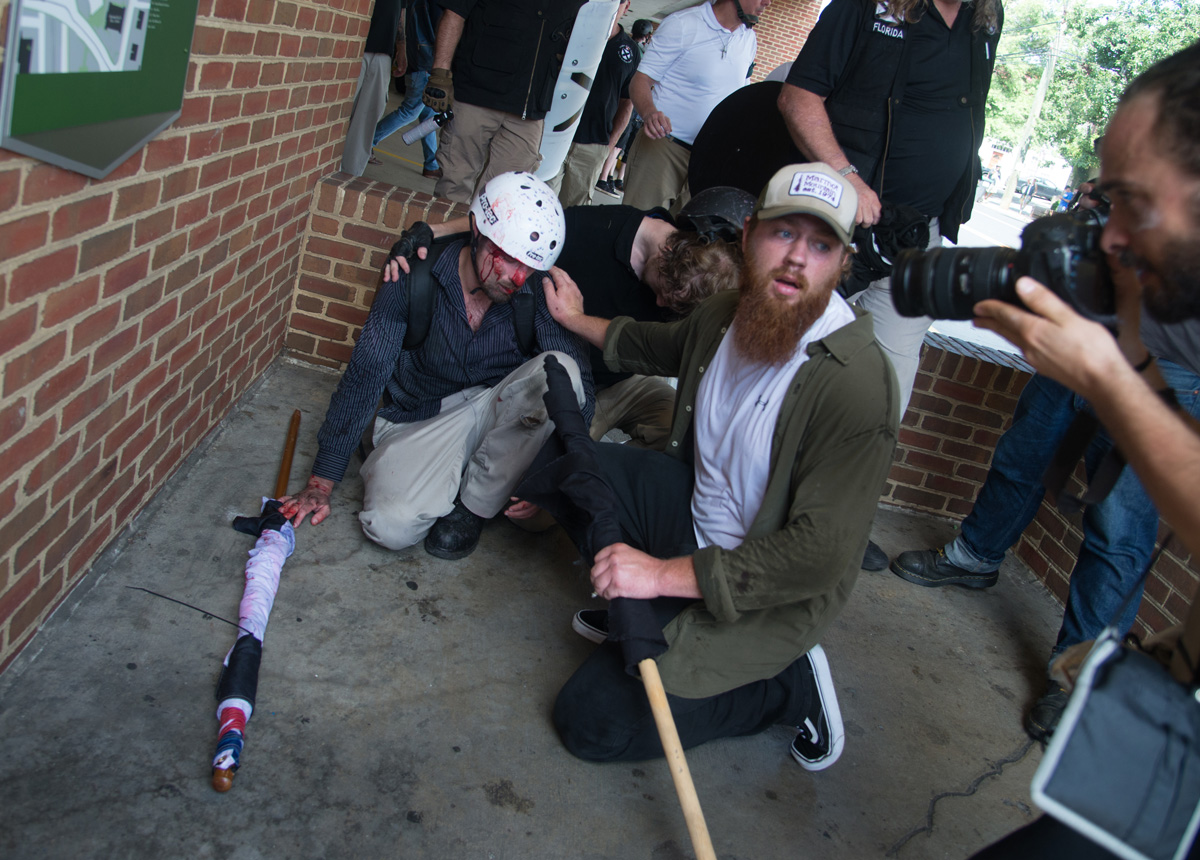 The unidentified neo-Nazi on the right was one of Harris’s attackers. 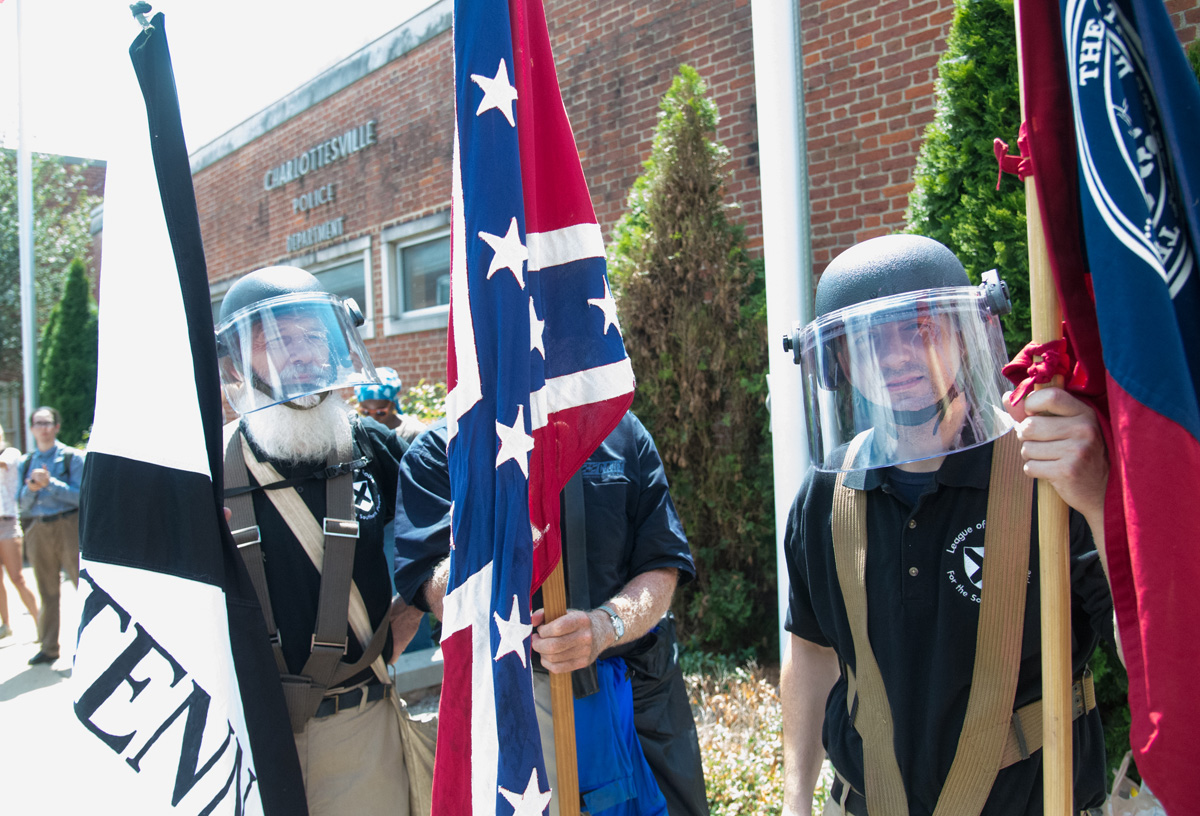 Soon after the beating, white supremacists gathered outside the Charlottesville police station. 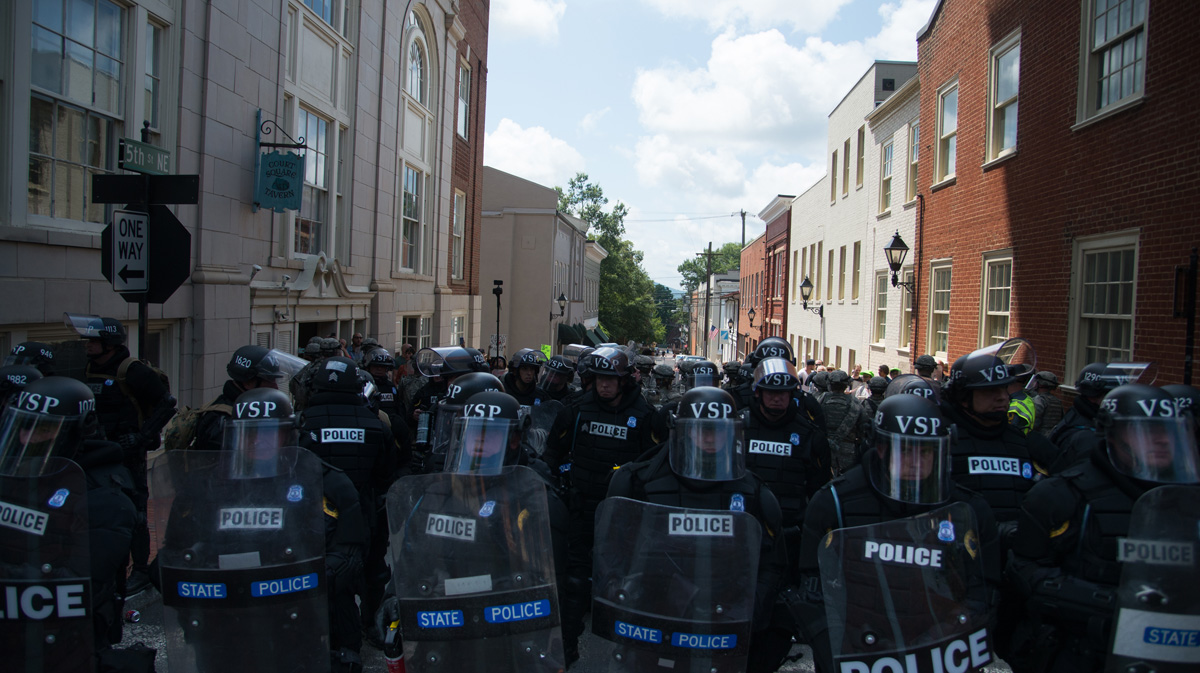 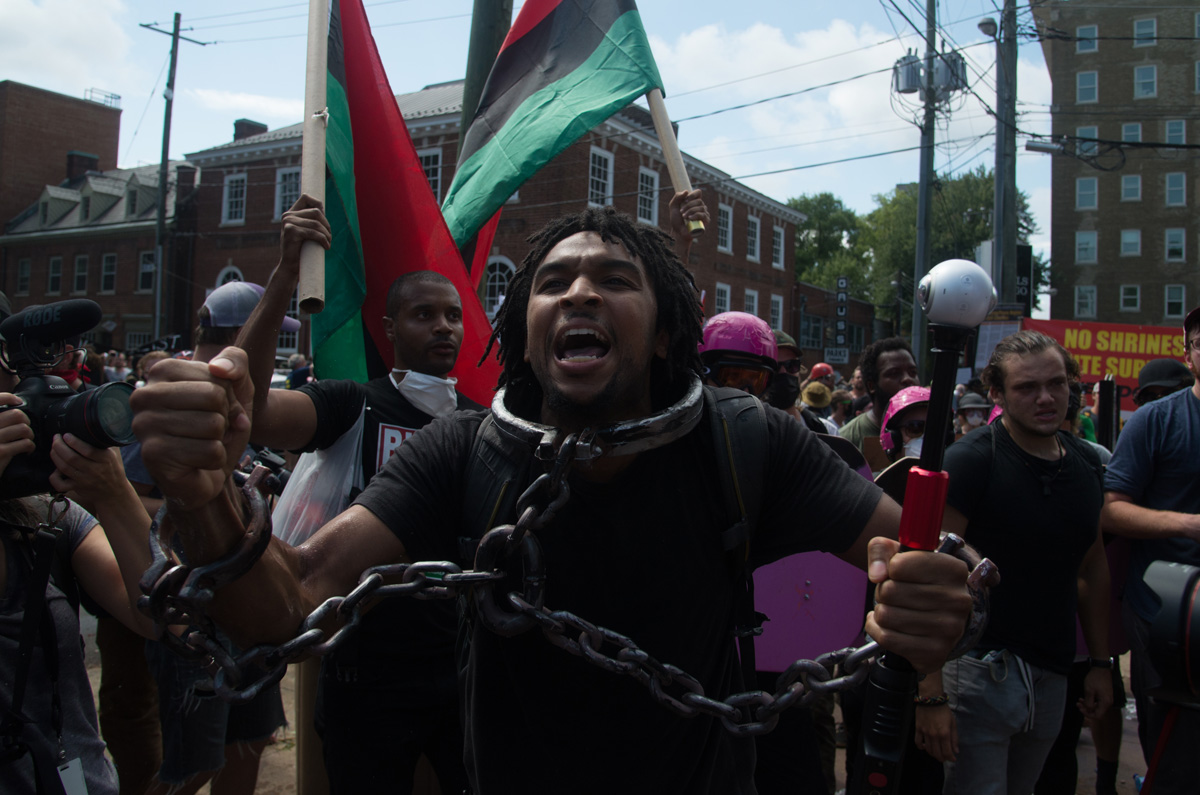 A counterprotester outside Emancipation Park 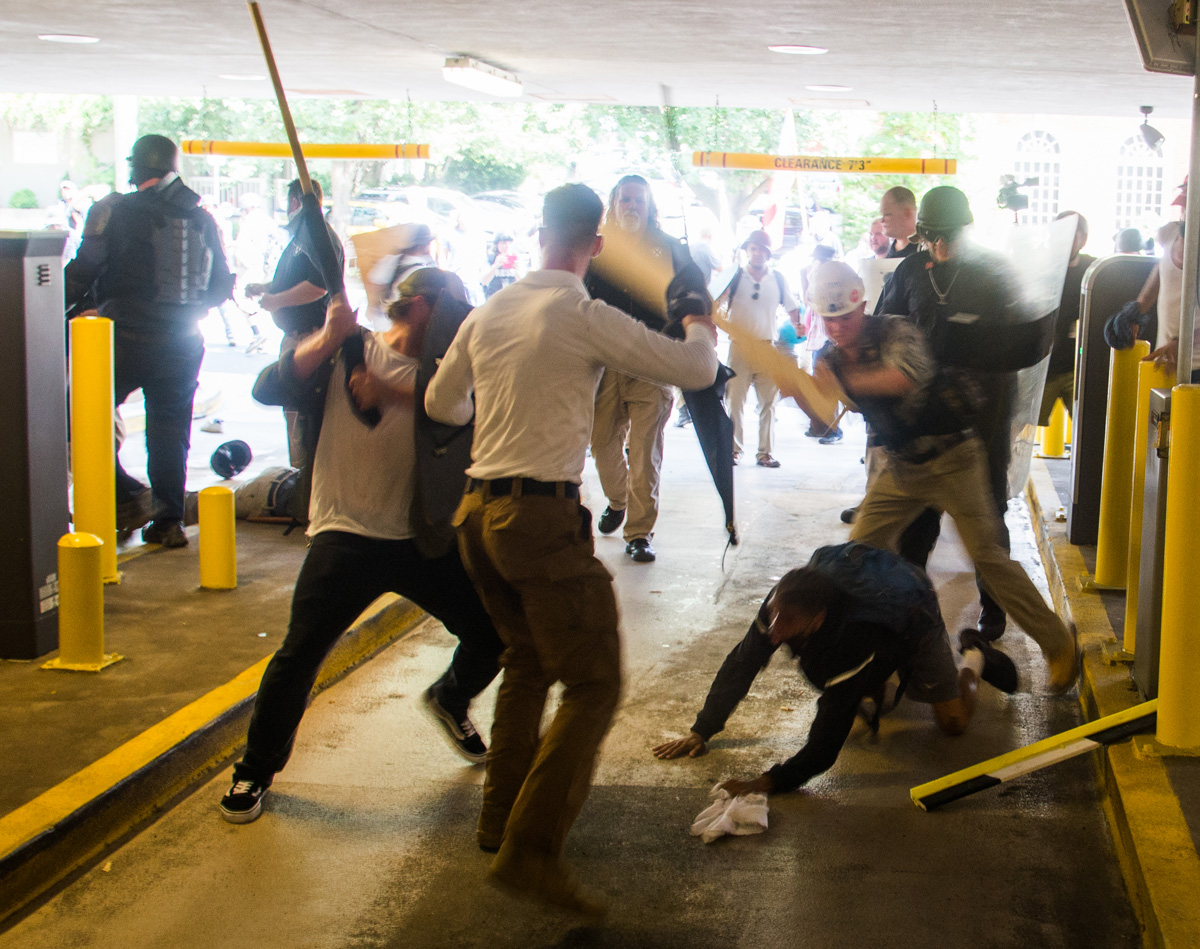 The photo of the attack on Deandre Harris that went viral 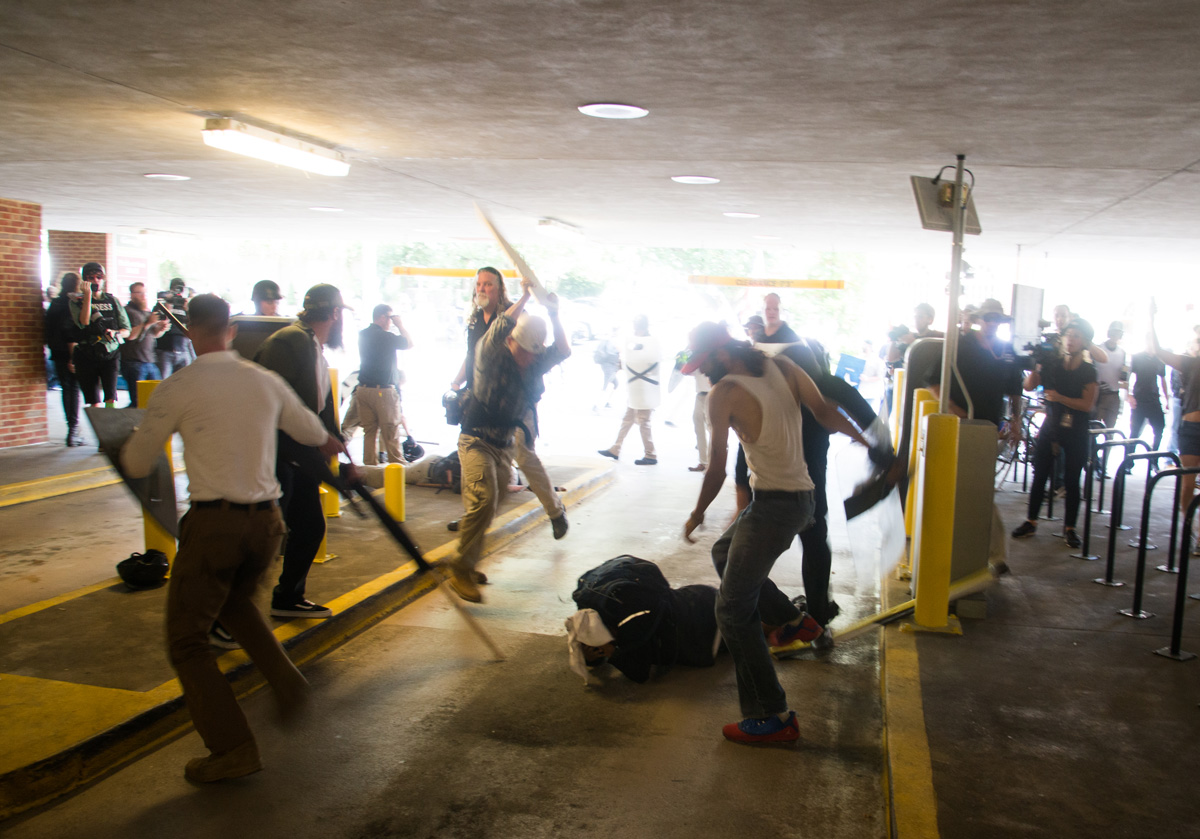 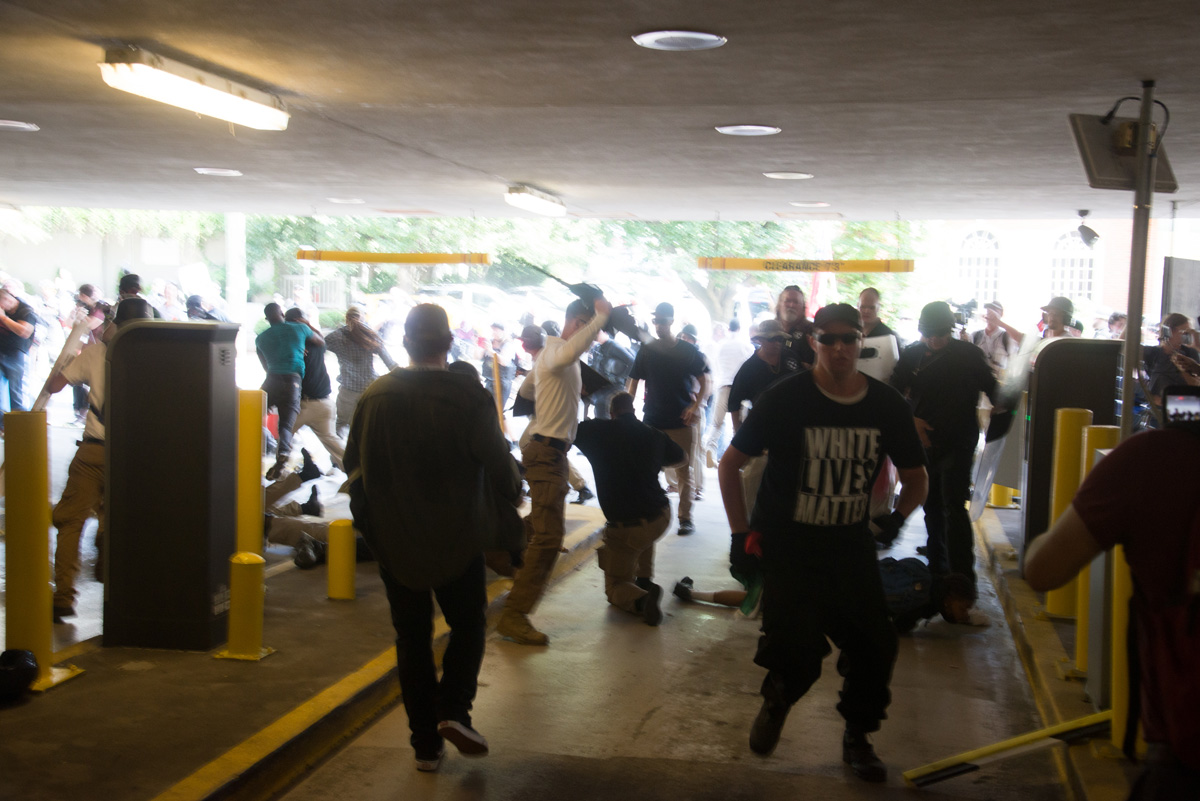 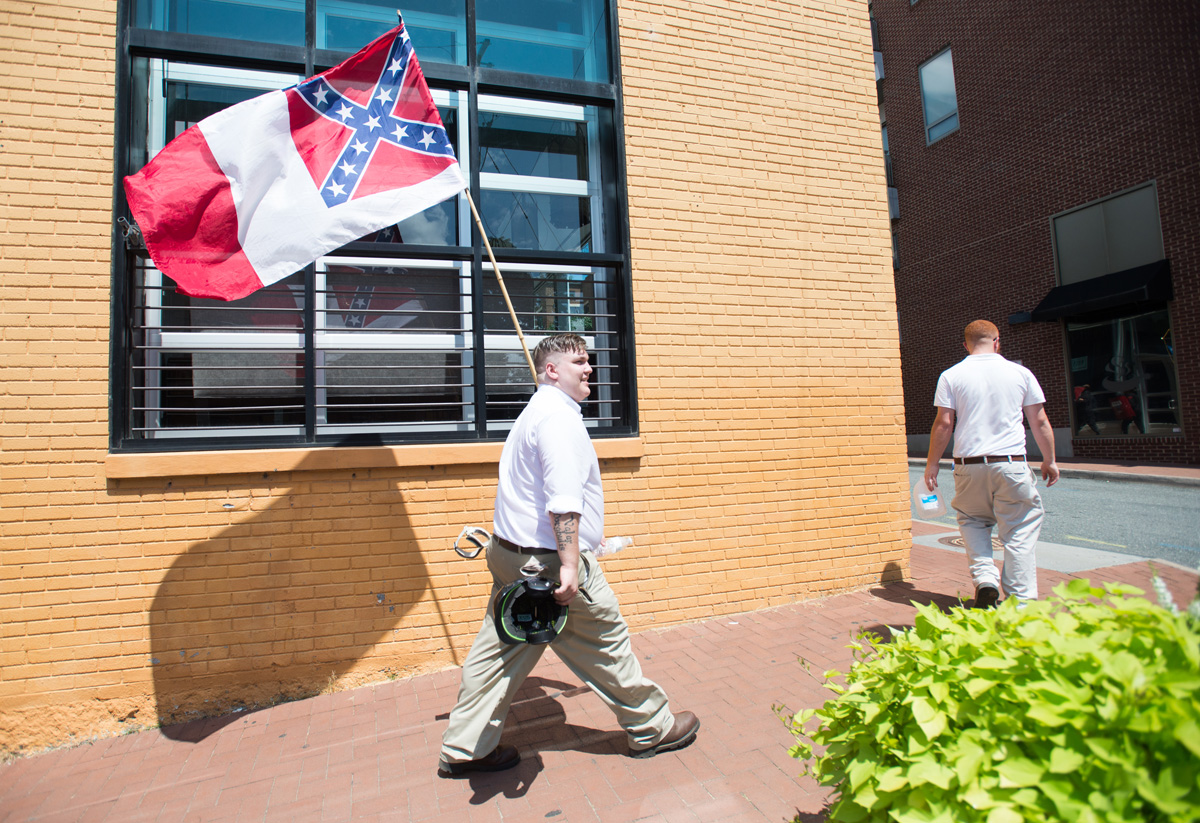 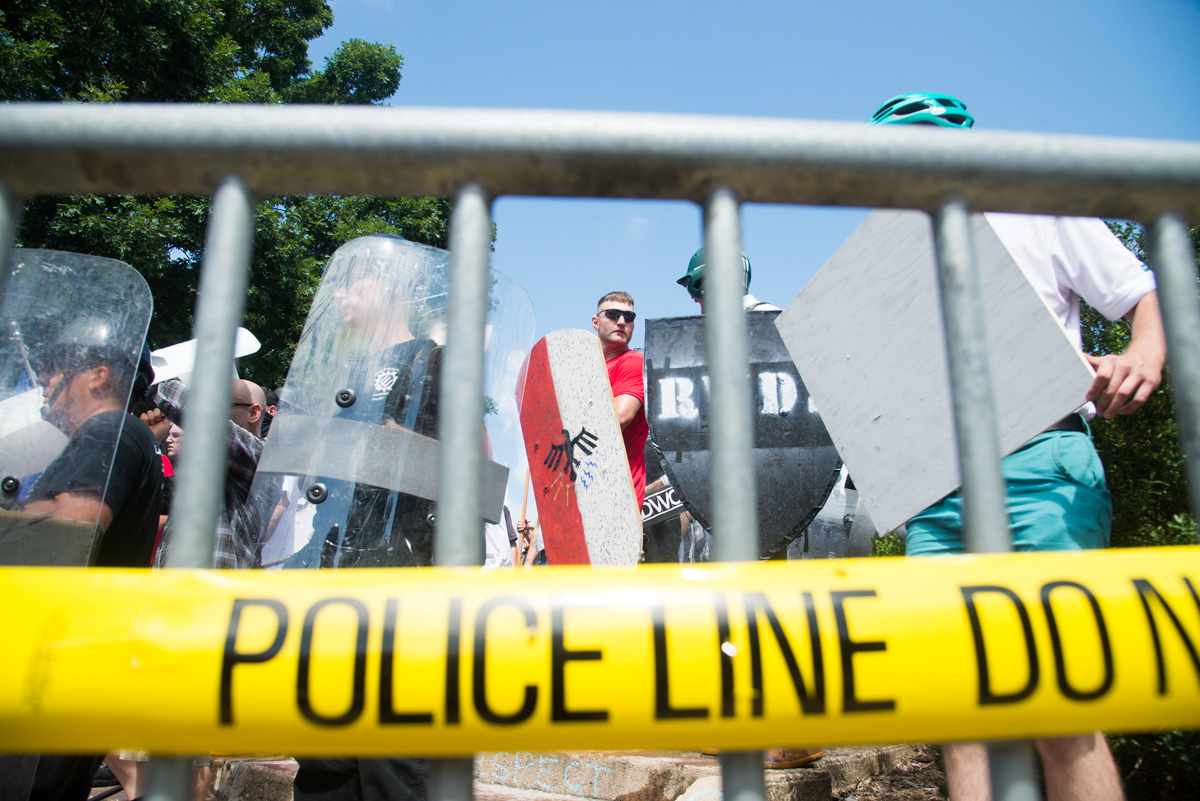 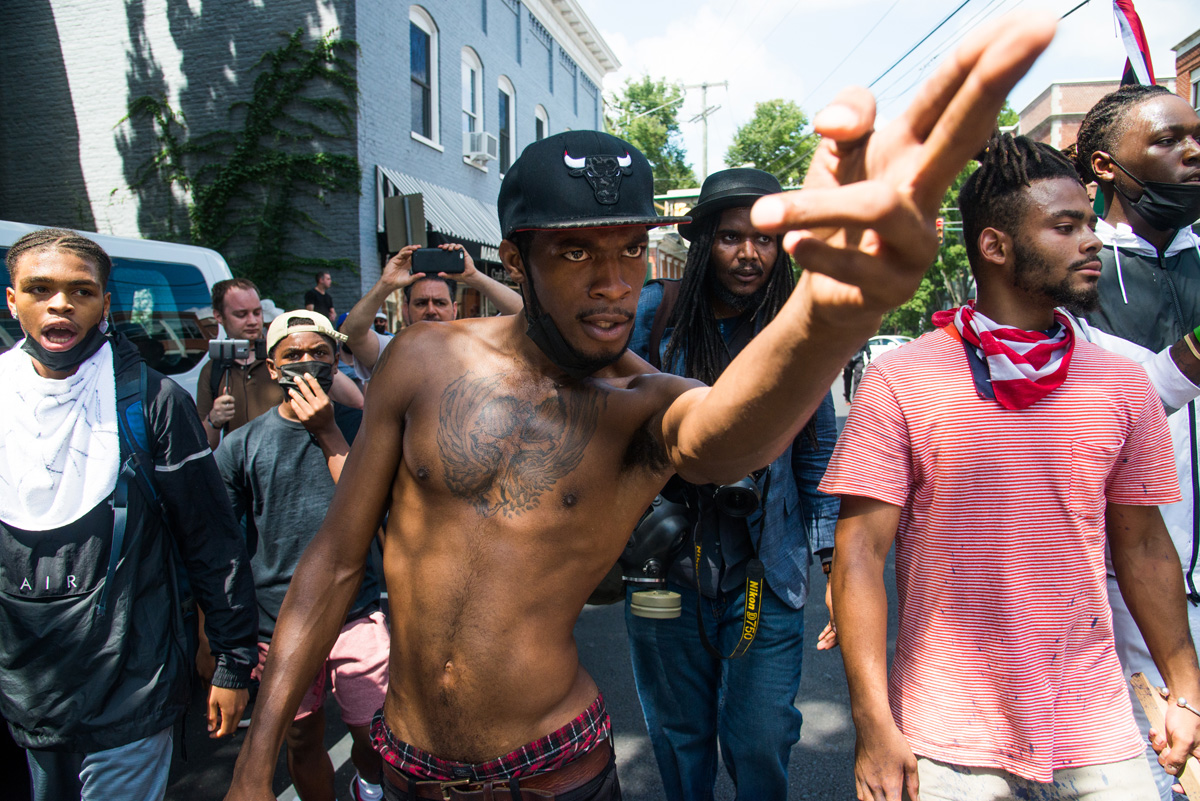 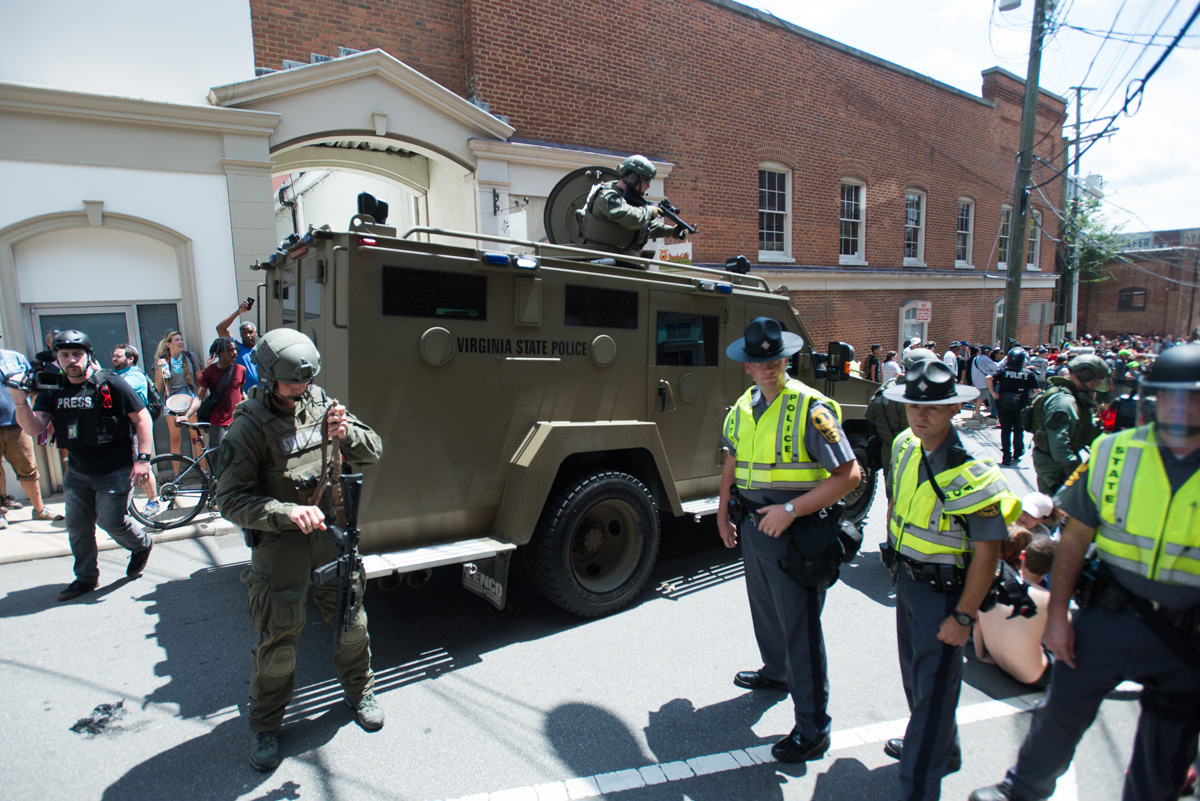 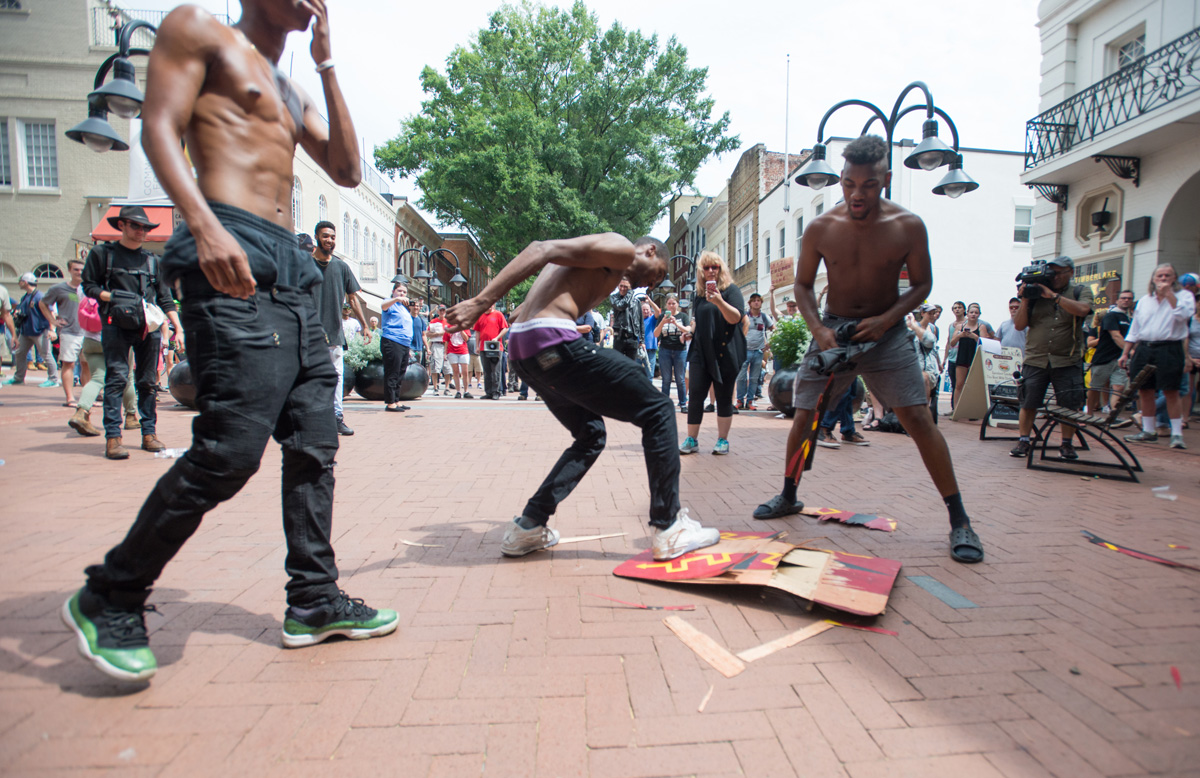 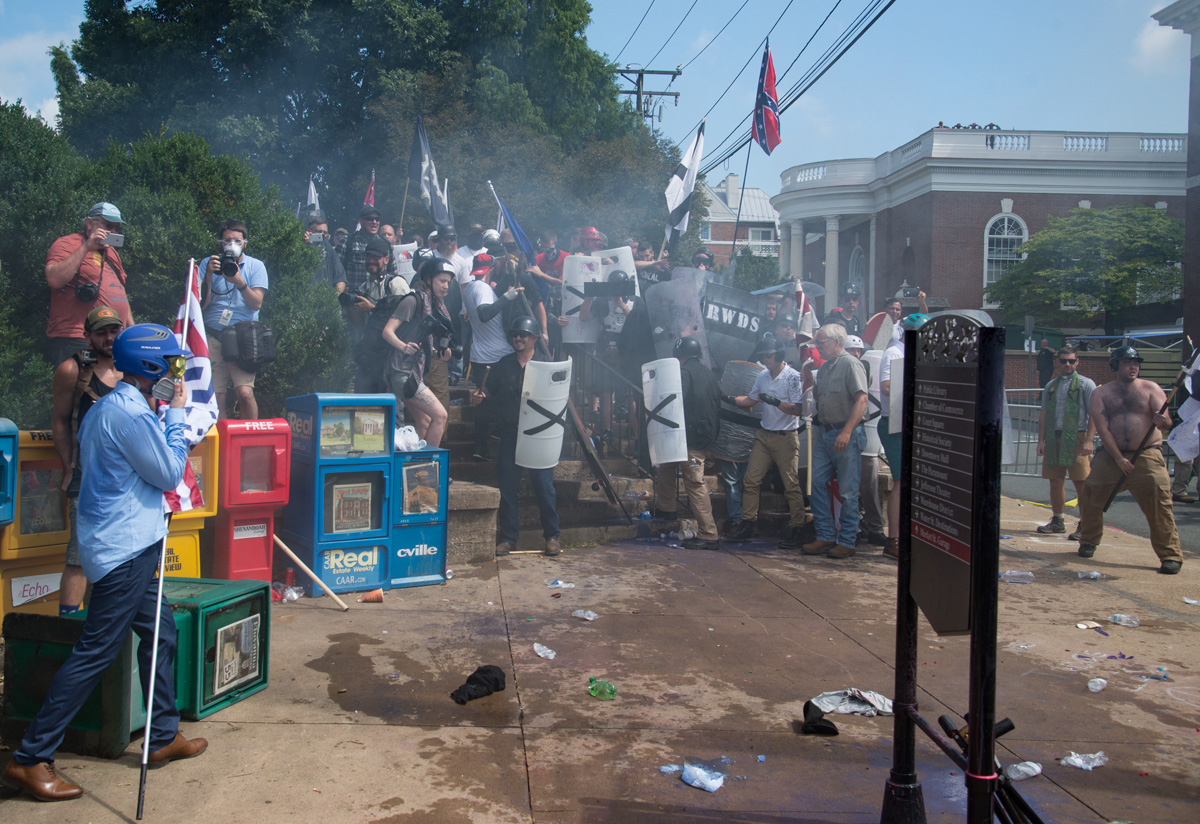 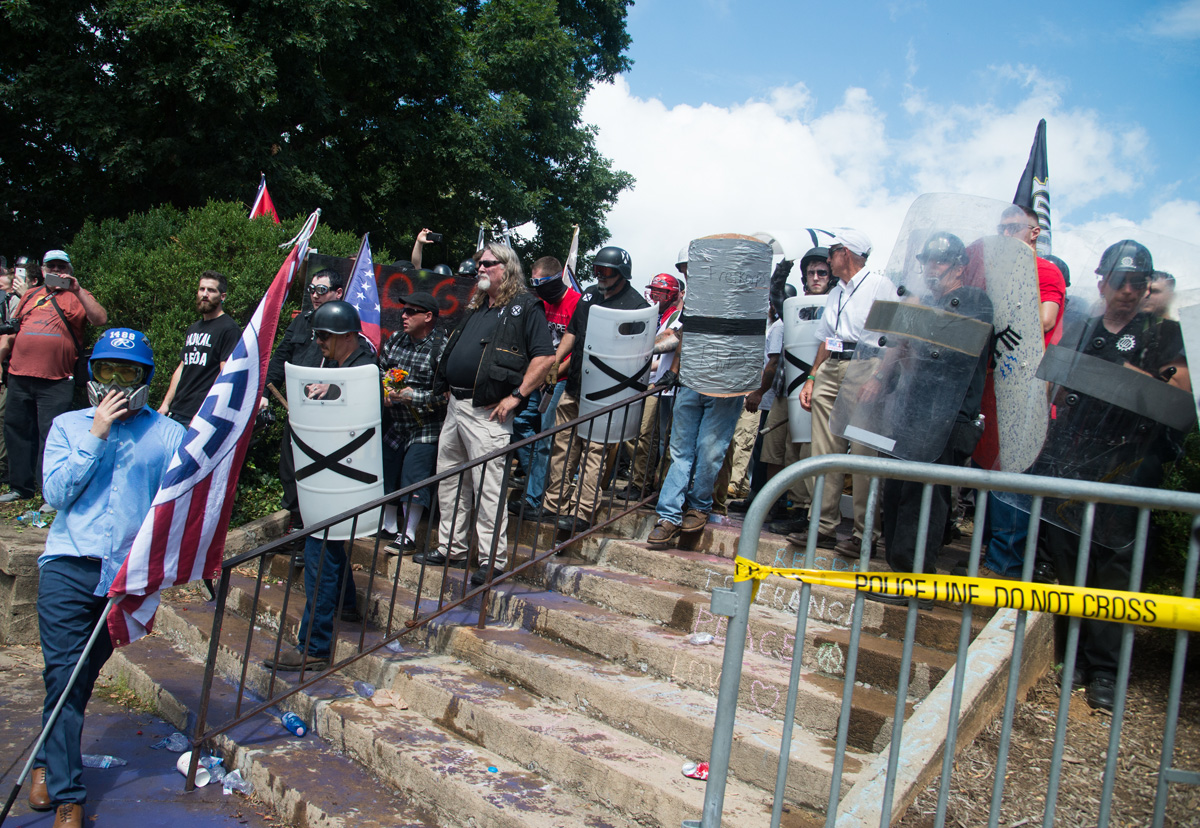 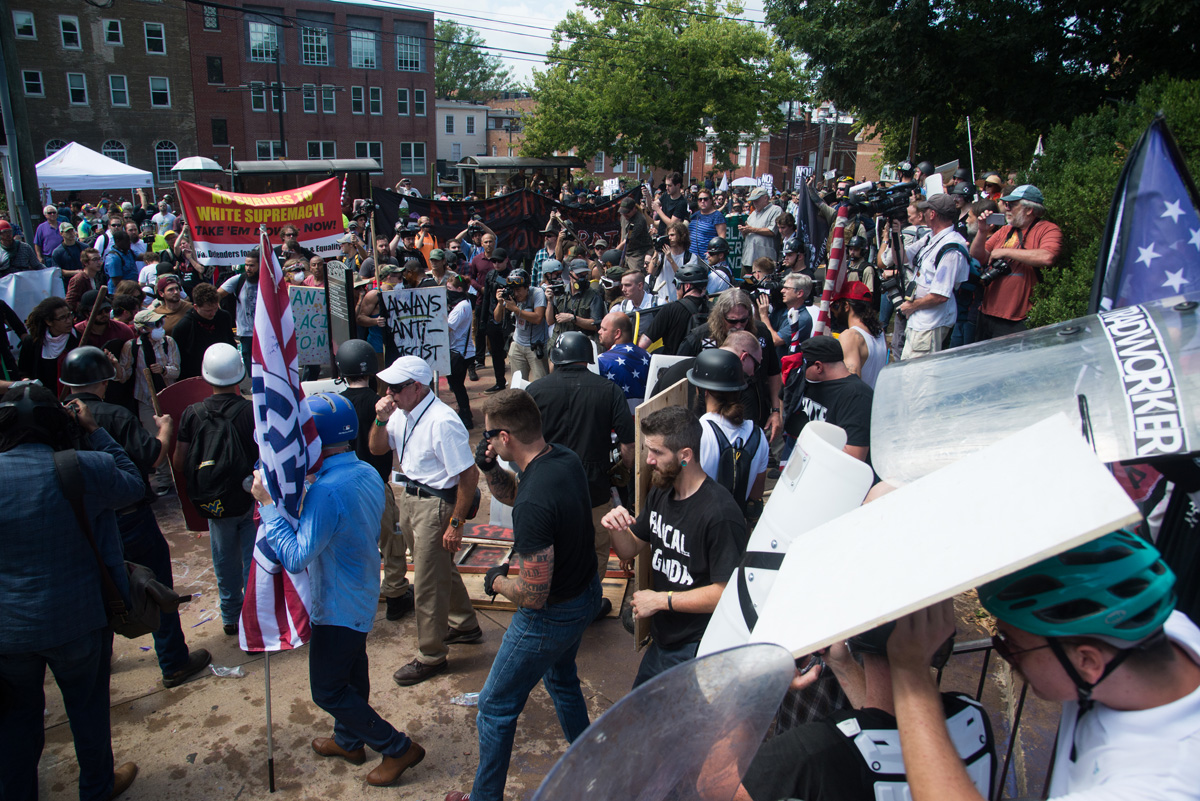