The True, Fascinating Story Behind the Events of “Dog Day Afternoon”

The Village Voice was right there as three men tried to rob a Brooklyn bank on August 22, 1972

Film Forum is currently presenting “Ford to City: Drop Dead — New York in the ’70s,” a series devoted to the classic, history-making movies made during some of the city’s darkest years. To celebrate the retrospective, we are sharing some of the stories and reviews that ran in the Village Voice during that time.

One of the most unforgettable films about New York in the Seventies, Sidney Lumet’s Dog Day Afternoon (1975) was based on a real-life 1972 attempt at a bank robbery in Brooklyn by three men. Village Voice writer Arthur Bell — who would go on to become one of the paper’s most prominent columnists, especially on LGBT issues — actually knew the man who led the trio, John Wojtowicz, a/k/a Littlejohn Basso, and talked to him on the phone during the heist. Bell and the Village Voice’s city editor Mary Nichols also got a police escort (“sirens blazing…90 miles an hour”) to the scene of the action, where Bell reported from the ground.

While press accounts and the film itself would later claim that the robbery was meant to pay for a gender reassignment surgery for Wojtowicz’s lover, Bell reported that the crime was actually masterminded by the Gambino crime family. He memorialized the events, as well as the response from the LGBT community, in a fascinating article in the August 31, 1972, issue of the paper. We’re presenting the pages below (so you can see all the awesome mind control ads), but you can actually read a digital version of the piece here.

Then, in 1975, the Voice‘s Cliff Jahr interviewed Wojtowicz, at the time doing 20 years in prison at Lewisburg Penitentiary, in a wide-ranging discussion. Jahr also includes in the piece portraits of Wojtowicz’s first wife, Carmen, as well as Liz Eden (formerly known as Ernie Aron), the lover whose surgery had been the talk of so many during the robbery itself. Below, we have also included that piece, along with Andrew Sarris’s review of the film from that same issue of the Voice. 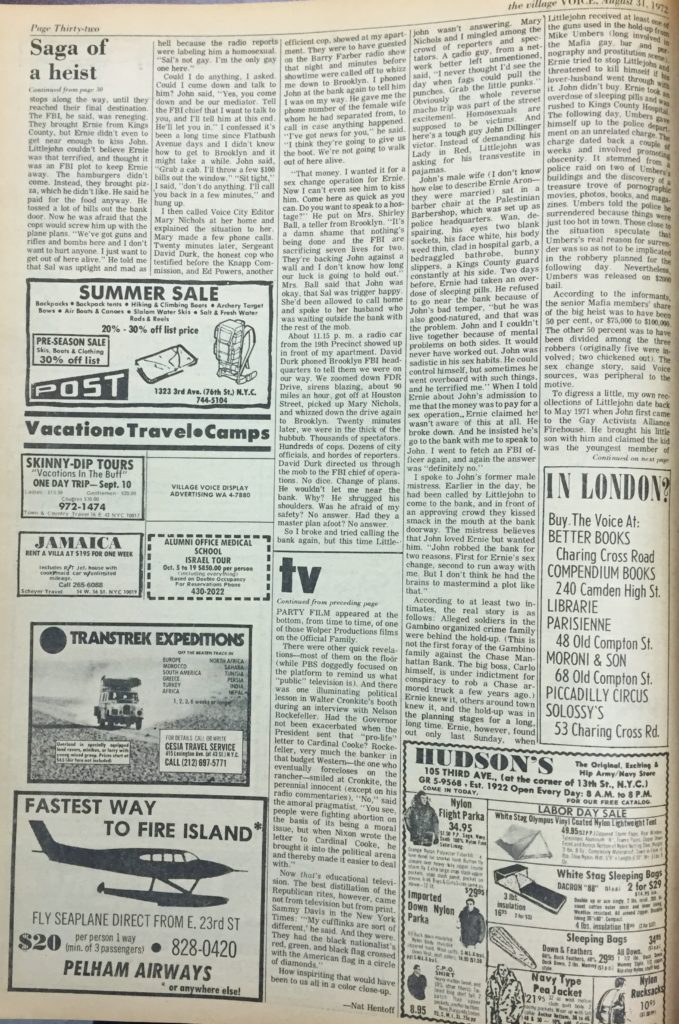 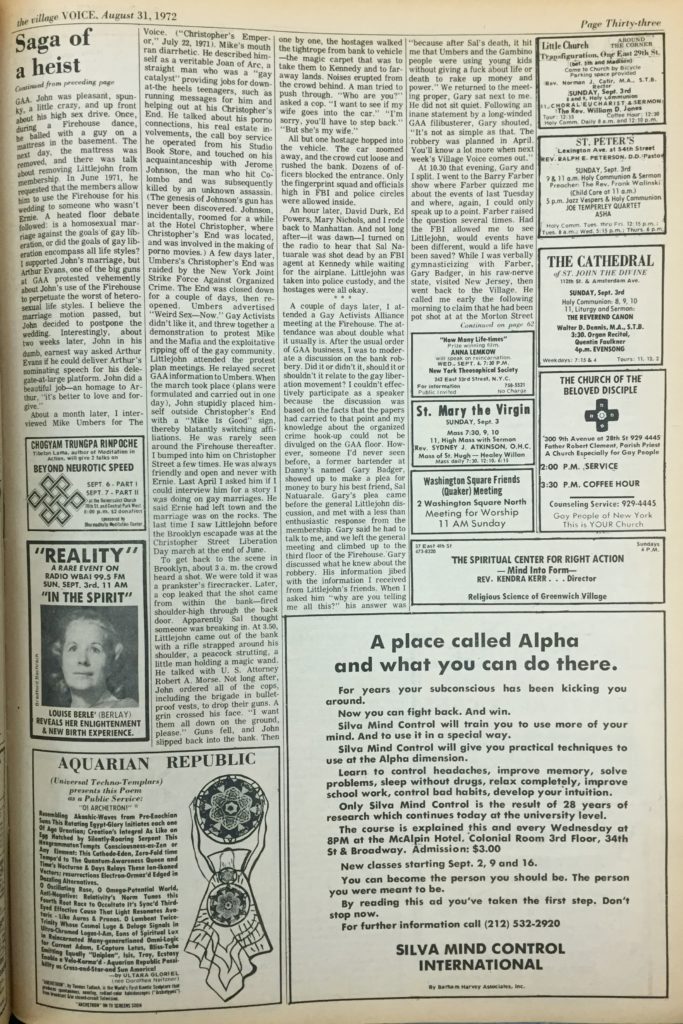 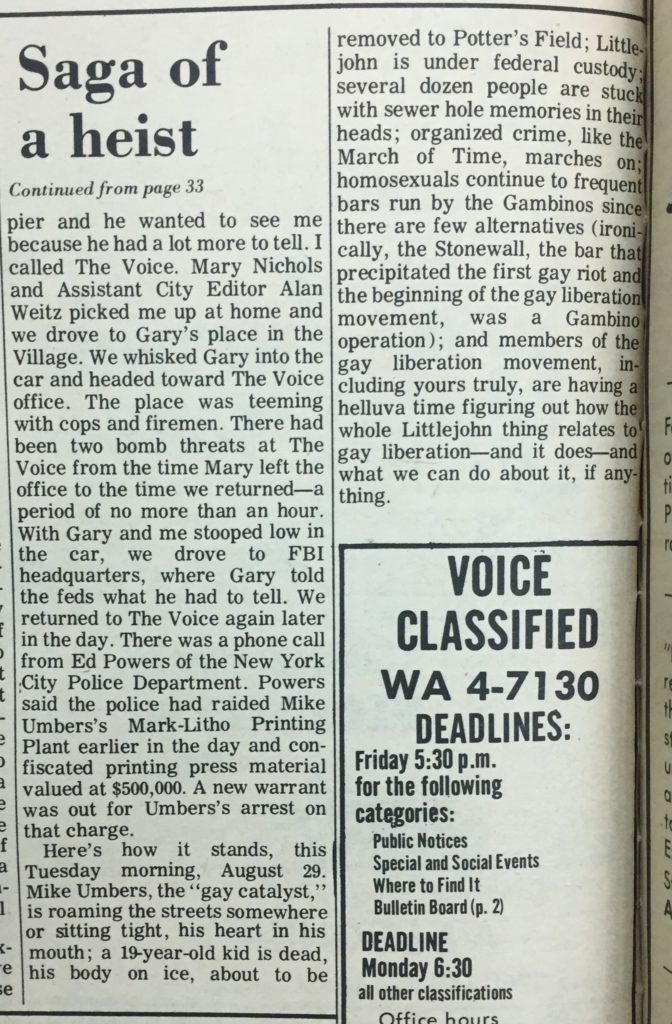 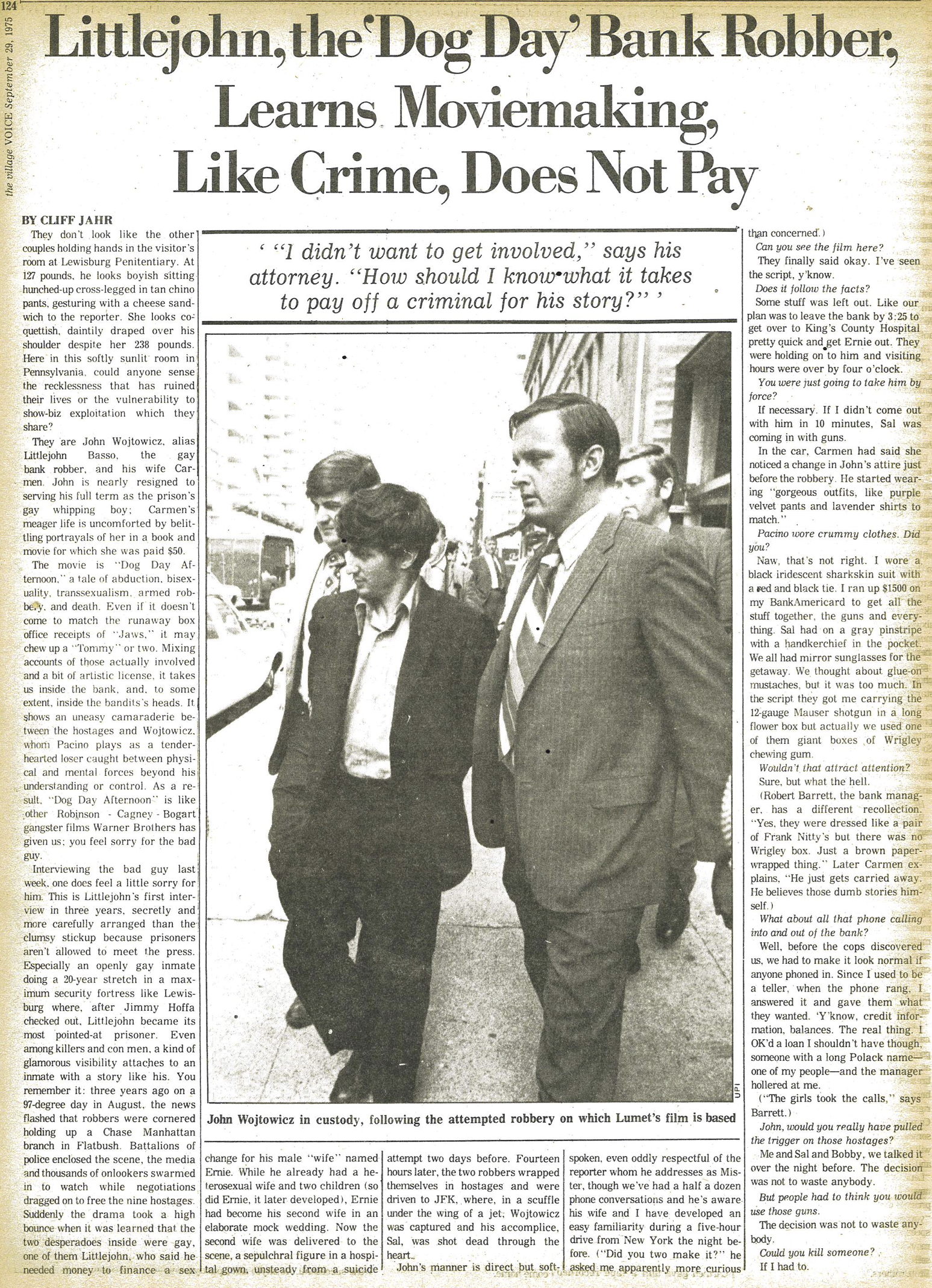 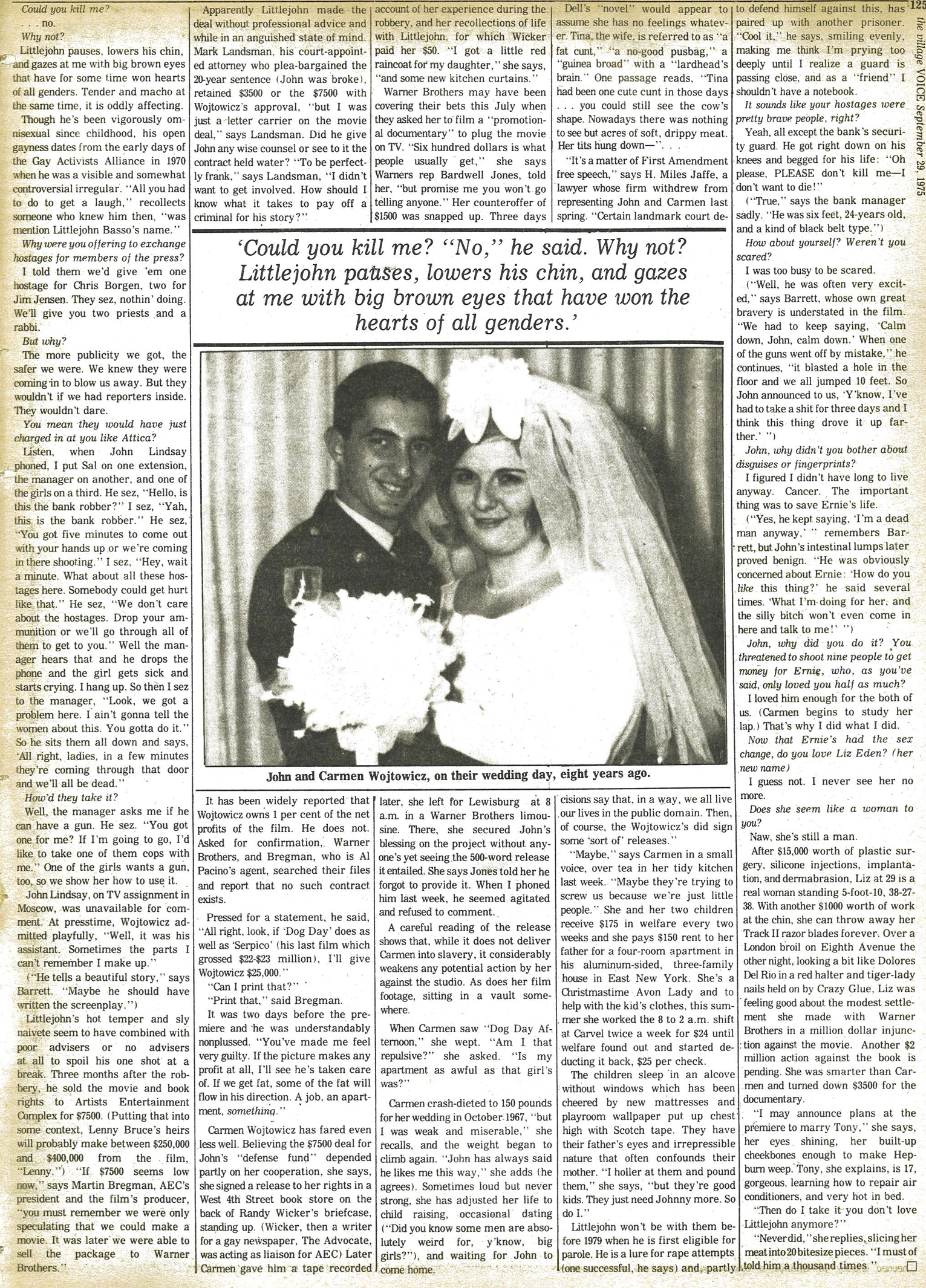 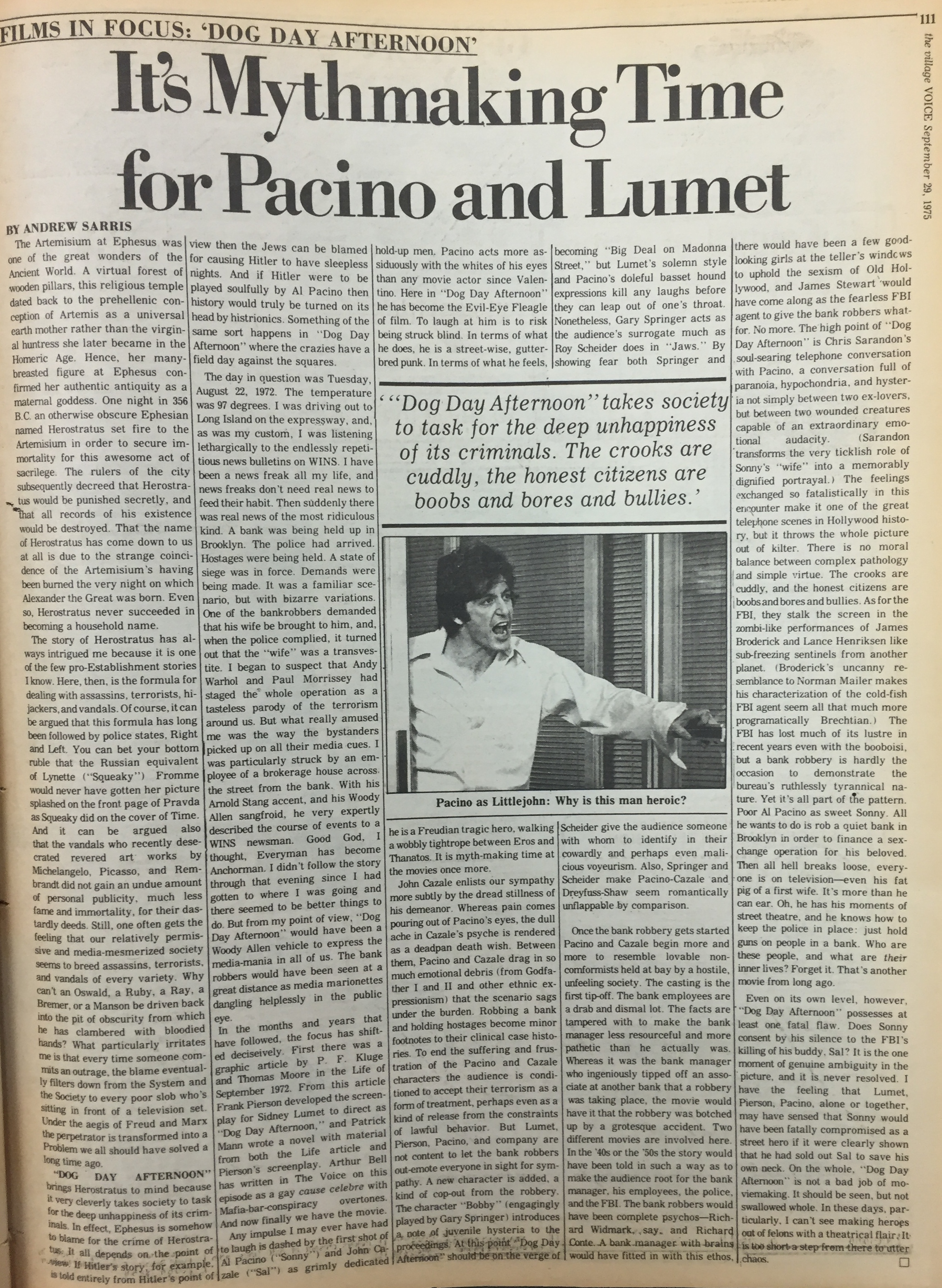