It was pelting rain on East 42nd Street outside CUNY’s headquarters on Thursday afternoon, but that didn’t keep several hundred people from turning out for a gathering of the Greater New York Area’s far-right tribes.

Islamophobes, 8chan trolls, western-chauvinist frat boys, anti-Antifa brawlers, Jews for Trump, and further boisterous motley collected in a pen of police barricades, calling for CUNY to disinvite one of the most prominent Muslim women in the United States from speaking at the university’s commencement ceremony next Friday.

Hikind’s bill of indictments supporting his terrorism accusation was pretty thin gruel: Sarsour — until recently the head of the Arab American Association of New York and one of the co-chairs of the 2017 Women’s March — is vocally critical of Israeli policy; she recently shared a stage with Rasmieh Odeh, who 47 years ago was convicted in an Israeli military court on terrorism charges; and she once wrote a tweet suggesting that a photograph of a Palestinian boy holding a rock in the face of armed Israeli soldiers depicted courage. “She thinks throwing rocks at cars is an act of courage,” Hikind bellowed. “ ‘The definition of courage’ is throwing rocks. Throwing rocks at cars. Throwing rocks results in the murder of innocent men, women, and children.”

Leaving aside the strength of his evidence, Hikind was an unlikely vehicle for accusations of terrorist sympathy, given that he himself was once an actual member of an actual terrorist organization, an association from which he remains unwilling to distance himself.

As the attacks on Sarsour have mounted, Jewish allies have leaped to her defense, noting her history of collaboration and bridge building between Muslim and Jewish groups. 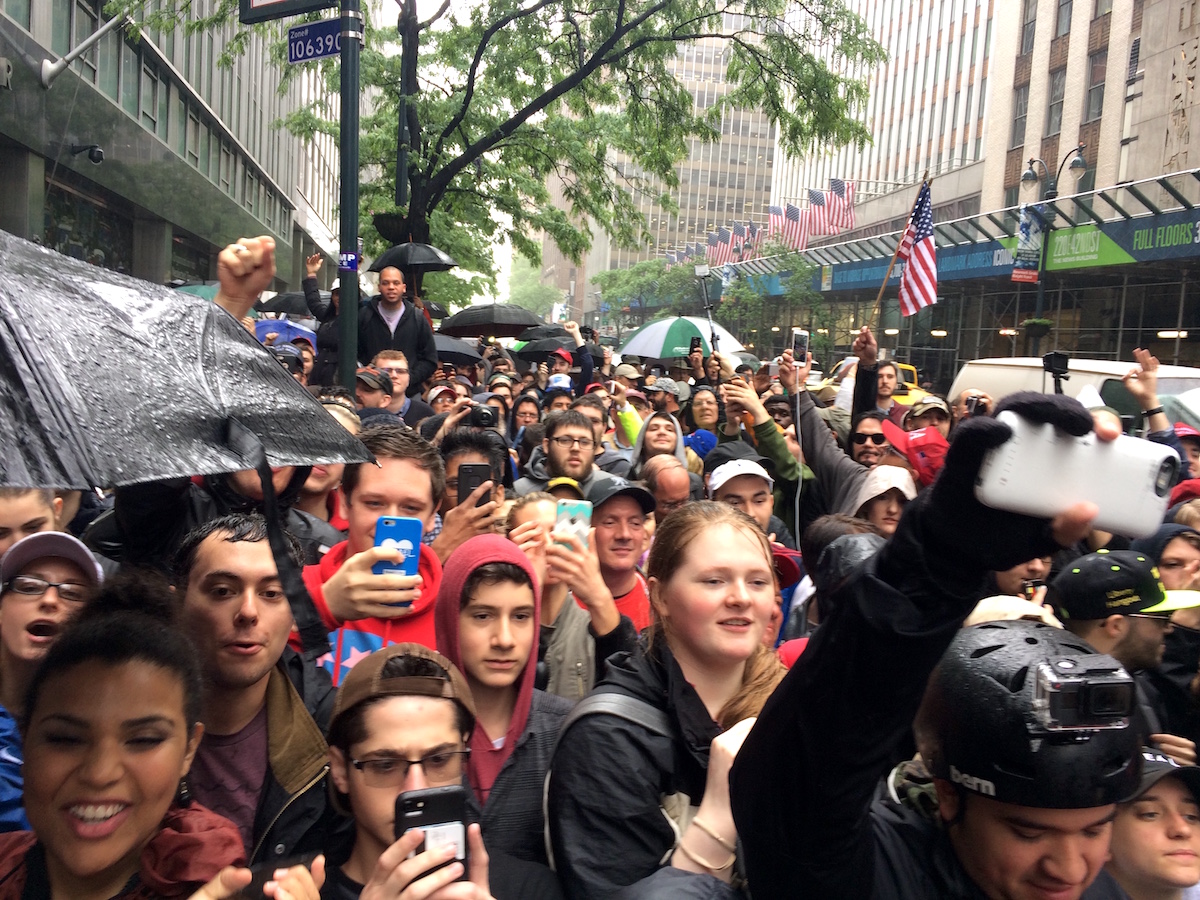 But the scrum on East 42nd Street represented more than just a flare-up in New Yorkers’ disagreements over Middle Eastern politics.

The event was emceed by Pamela Geller, who rode to notoriety as one of America’s preeminent Islamophobes in 2010 opposing the construction of an Islamic cultural center in Lower Manhattan. (Geller herself dismisses the label of Islamophobia, and frequently cites a quotation she misattributes to Christopher Hitchens: “ ‘Islamophobia’ is a word created by fascists, and used by cowards, to manipulate morons.”)

Geller brought with her a parade of other stars of the Islamophobia firmament. “There are the evil losers to whom President Trump referred over the weekend after the horrific Manchester terror attack, an attack that I might add that people like Linda Sarsour likely supported since it led to the murder of infidels and non-Shariah-abiding innocents,” said Lauri B. Regan, a lawyer who writes frequently about the creeping threat of Shariah law. “There is no question that Linda Sarsour is an evil loser. Evil loser.”

Regan was followed by John Guandolo, a disgraced former FBI employee who is on the record as believing that “we need to find the Islamic movement anywhere it is, including in the United States, and crush it and defeat it now.” Islam and terrorism are one and the same, Guandolo charged. “Legally, we need to do everything that we can to crush them and destroy them here in the United States.”

Rightist movements of all stripes have increasingly framed their causes as matters of freedom of speech in recent months, accusing their critics of attempting to silence legitimate speech. That these same movements were now rallying to deny someone a platform produced some measure of cognitive friction. “Freedom of speech is a precious commodity in America, and nobody wants to take away anyone’s freedom of speech,” Hikind told the crowd. “But when CUNY imposes Linda Sarsour on the students, that’s outrageous! Shame on CUNY! Shame!”

As the speakers droned on, the colorful petri dish of New York’s freshly visible right-wing communities frothed and bubbled. Denizens of the trollier corners of the Internet, decked out in riot-police cosplay and brandishing the Gadsden and Kekistani flags, traded inside jokes about throwing leftists out of helicopters. Members of the Warriors for Freedom, who present themselves as reluctant pugilists sworn to defend the vulnerable from the violence of anti-fascist aggressors, folded their arms and gazed out impassively from behind wraparound sunglasses. Gavin McInnes, a co-founder of Vice Magazine who has since devoted himself to drumming up pledges for his brownshirt-Chad fraternity devoted to the supremacy of “western civilization,” paced the event area, surrounded by a coterie of young men in Make America Great Again hats. At one point, he taunted a small group of counter-protesters from behind a row of police officers, offering them a can of Pepsi.

The attention of the crowd focused somewhat for the event’s headliner, Milo Yiannopoulos, a fading provocateur who was permanently banned from Twitter last year for instigating a racist harassment campaign against Leslie Jones and who lost his post at Breitbart in February after he made remarks that made light of pedophilia.

But even as he insulted Sarsour’s appearance and her religion, Yiannopoulos wasn’t on quite the same page as the rest of the rally: Sarsour should speak at CUNY, he told the crowd.

“I would have paid her fee, no matter how many goats she asked for,” he said. “Don’t ban her.” It was a sentiment diametrically opposed to the organizing rationale of the rally, but participants seemed not to care. Ideological coherence was less important to participants than the opportunity to gather together outside the Internet, raise their voices, and flex their muscles.

As the rally ended, participants assaulted a 19-year-old woman who’d been taking part in the counter-protest. Police detained some people, but no arrests were made.