Outside 180 Maiden Lane, blocks from the South Street Seaport, a server holding a tray of sample cups greeted arrivals, her name tag indicating she was with the NYS Department of Education. “Turkey chili?” she offered. And just like that, Share Our Strength’s 28th annual “Taste of the Nation” food festival was off and running, the chili cups a small sampling from the city’s school lunch program, as well as a humble reminder of why over 800 guests were gathered last Monday on a damp and misty evening in lower Manhattan. Share Our Strength’s “No Kid Hungry” campaign, beneficiaries of the night’s proceeds, battles child hunger across the country; on a local level, it provides breakfast and summer lunch programs to schoolchildren who would otherwise go without, and proceeds from this particular evening raised enough for 1.9 million meals.

In the expansive glass atrium of 180 Maiden Lane, the dapper Eamon Rockey — formerly of Betony (RIP), and our spirits chair for the evening — welcomed partygoers with glasses of his beloved milk punch. The room was festooned with flags in bright orange, the campaign’s signature color; they dotted each booth with the name of its participating restaurant or bar, of which there were fifty. Danny Meyer served as the event’s honorary chair, with chefs Anita Lo and Bryce Shuman serving as culinary co-chairs.

Representatives from Meyer’s far-flung restaurant empire were clustered together, an amalgamation of booths bearing mostly sweets and cocktails, including Daily Provisions and its popular maple cruller. Union Square Cafe was set up away from the crowd, serving a roast pork and sweet pea bruschetta with grilled ramps, a bite-size re-enactment of the refined rustic and seasonal cuisine for which it is known. 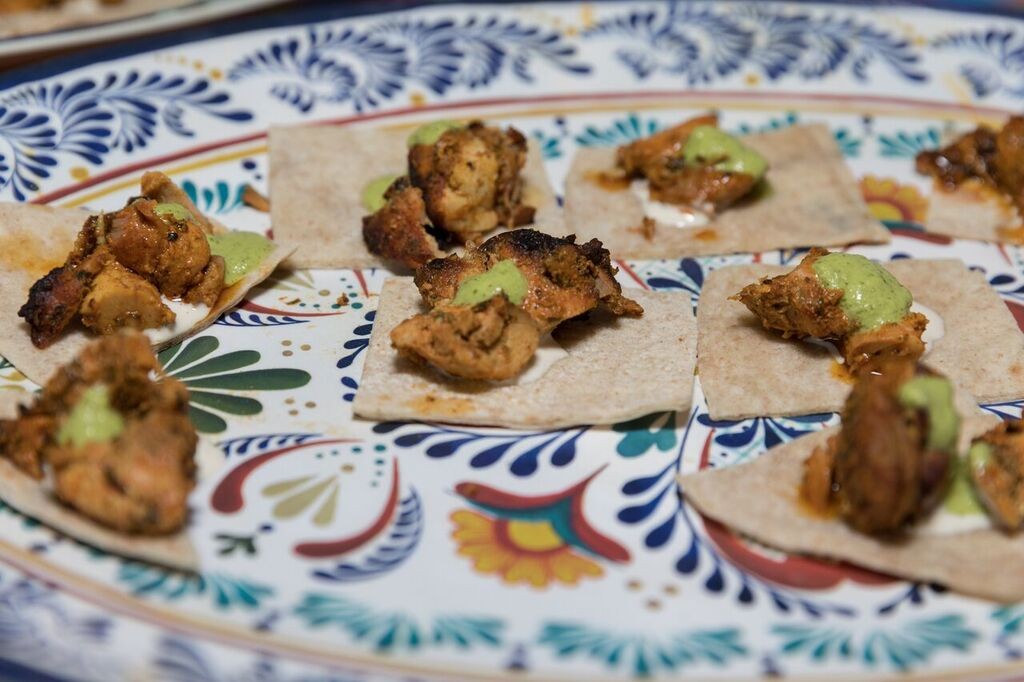 Chef Emily Yuen’s Bessou passed out a memorable Japanese riff on the deviled egg, appropriately named Deviled Tamago: a smoked, soy-pickled egg topped with shiitake bacon and karashi (mustard) cream. Chef Gerardo Gonzalez of Lalito served curried chickpea tamales with charred poblanos; throughout April, he had donated all proceeds from the dish’s full-size restaurant version to No Kid Hungry. And Acme’s Brian Loiacono doled out savory mini-tarts of nettles and goat cheese, inspired by the new spring menu at his restaurant.

The eighteen-year-old chef–boy wonder Flynn McGarry of Eureka was on the evening’s host committee, and his sweeping mop of hair could be seen bouncing throughout the event as he stopped to chat with his (older) peers, grazing as he went. Chef Leah Cohen of Pig and Khao and Top Chef fame was dressed down for the night, out of chef whites and clad in jeans and a T-shirt, as she chatted with bystanders and helped her team pass out bowls of Khao Soi, a spicy curry noodle soup topped with a crisp heap of fried noodles. 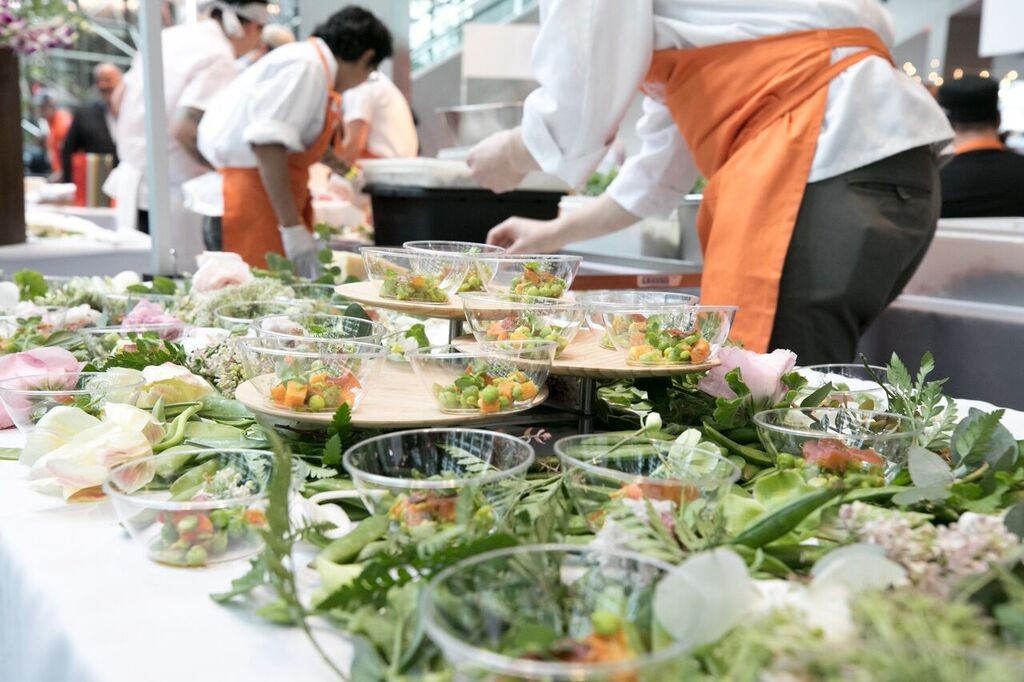 The Department of Education had a booth too, where Kid-friendly Kale Salad was being offered — it wasn’t the salad-converting bite one hoped it might be for young palates, but the chili cups from earlier and the creamy NYS Apple & Celery Salad both earned two thumbs up.

It was a night made for the Instagram set, as multiple kiosks, dubbed “Photo Beautifiers” by Citi sponsors, gave strollers the opportunity to snap glamour shots of their food within a backlit mirrored cube. A DJ spinning Top 40 hits soon gave way to the alt-country band the Strumbellas. Then another DJ took over and the room filled with enthusiastic dancers, buoyed by the cocktails and spirits on offer. A brief round of amateur breakdancing ensued. 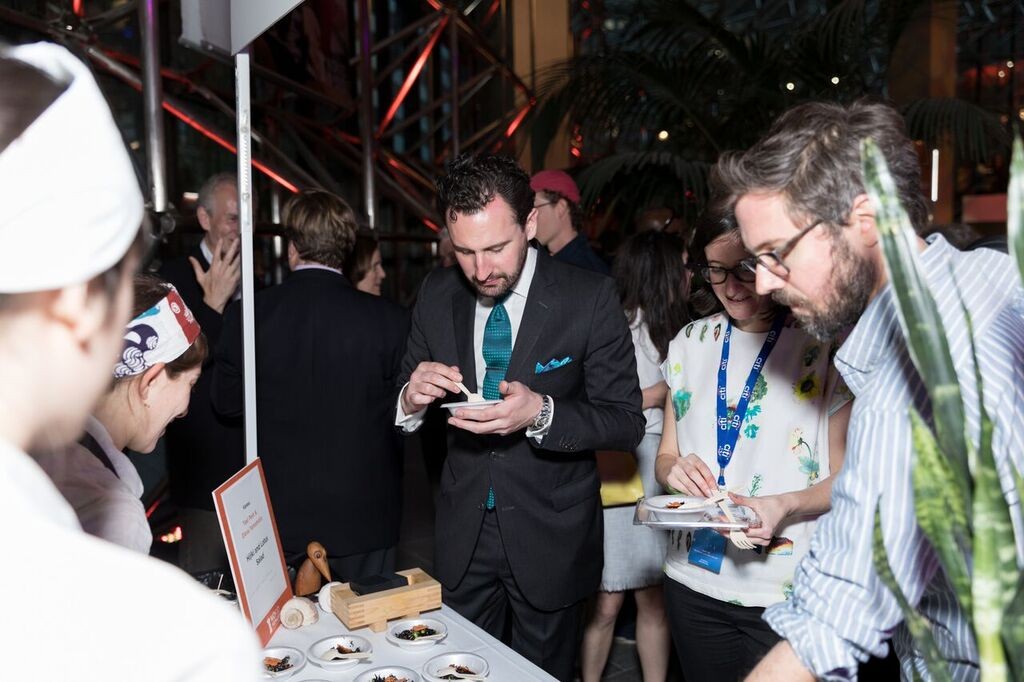 Just when we thought we would eat no more, we found ourselves outside assessing the light rain and lack of yellow cabs in sight. A food truck from Walter’s Hot Dogs, a Westchester institution since 1919, was parked nearby, the scent of split dogs being seared on a flattop beckoning us over — with most revelers still inside eating and drinking, there was no line. The duo inside the truck were bustling around, assembling mini-plates of funnel cake sticks dusted with powdered sugar, while pressing down every so often on their sizzling hot dogs. We were able to make room for more, so we accepted the offerings of half hot dogs and funnel cake, finding the familiar carnival of flavors a comforting final bite to this year’s lineup.