On a recent morning, a few days before the Broadway opening of Sweat, the playwright Lynn Nottage and the director Kate Whoriskey were having breakfast at a Brooklyn restaurant. “I think it’s important for us to taste the food on other people’s tables,” Nottage said.

Nearby diners could enjoy their avocado toast without fear. Nottage, a 2009 Pulitzer winner for Ruined, was speaking figuratively, describing the profound empathy that Sweat demands and rewards and seems to have sustained, even as it has moved its crew of disenfranchised steelworkers into the let-them-eat-cake environs of Studio 54. The play is Nottage’s long-overdue Broadway debut.

A dramatically gripping and politically prescient work, Sweat began in 2011 when a colleague directed Nottage to a New York Times article naming Reading, Pennsylvania, a town of 88,000, as the poorest city of its size in North America. According to census data released in 2011, 41.3 percent of Reading’s residents were living in poverty. 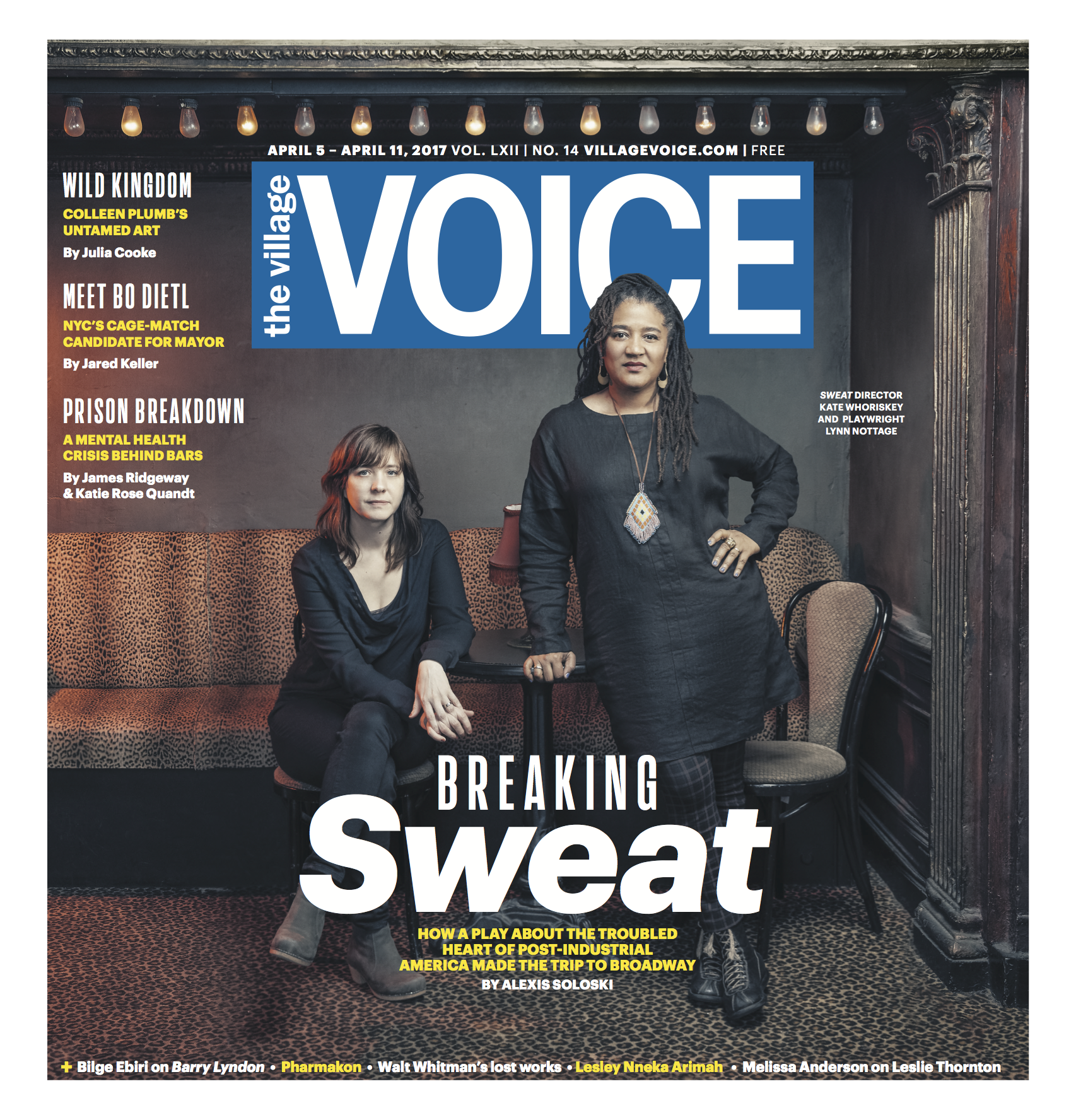 Nottage had been looking for a place that exemplified what she calls the “deindustrial revolution,” and so she began to travel there. A year later, Whoriskey joined her. For over two years, they went as often as four times a month, meeting with people and local organizations and trying to understand what the town had been, what it had since become, and how Reading’s citizens negotiate their daily lives.

Oskar Eustis, the artistic director of the Public Theater, spoke to Nottage about these visits early on. He found her desire “to get to know the people and give their experience a voice” to be “morally the most compelling project that anyone was talking about,” he said.

People were happy to speak to Nottage and Whoriskey, often doing so multiple times. “The first time people will give you the rote answers, and then the more you get to know them, the more comfortable they are with you — you peel away the layers of their lives,” Nottage said. As they got to know Reading’s citizens, there were a few happy surprises but more sobering ones, too, like watching community workers burn out or discovering that a man they’d often spoken with was inked with white-supremacist tattoos.

Once she’d concluded the interviews, Nottage put them aside and set out to write Sweat, which would go on to win the 2016 Susan Smith Blackburn Prize, the largest and most prestigious award for dramatic works by women. Angry, funny, and meditative by turns, the play, wrote Village Voice critic Michael Feingold, allowed us to “see not only deeper into the people’s lives but more widely into the causes of their increasingly lousy situation.” 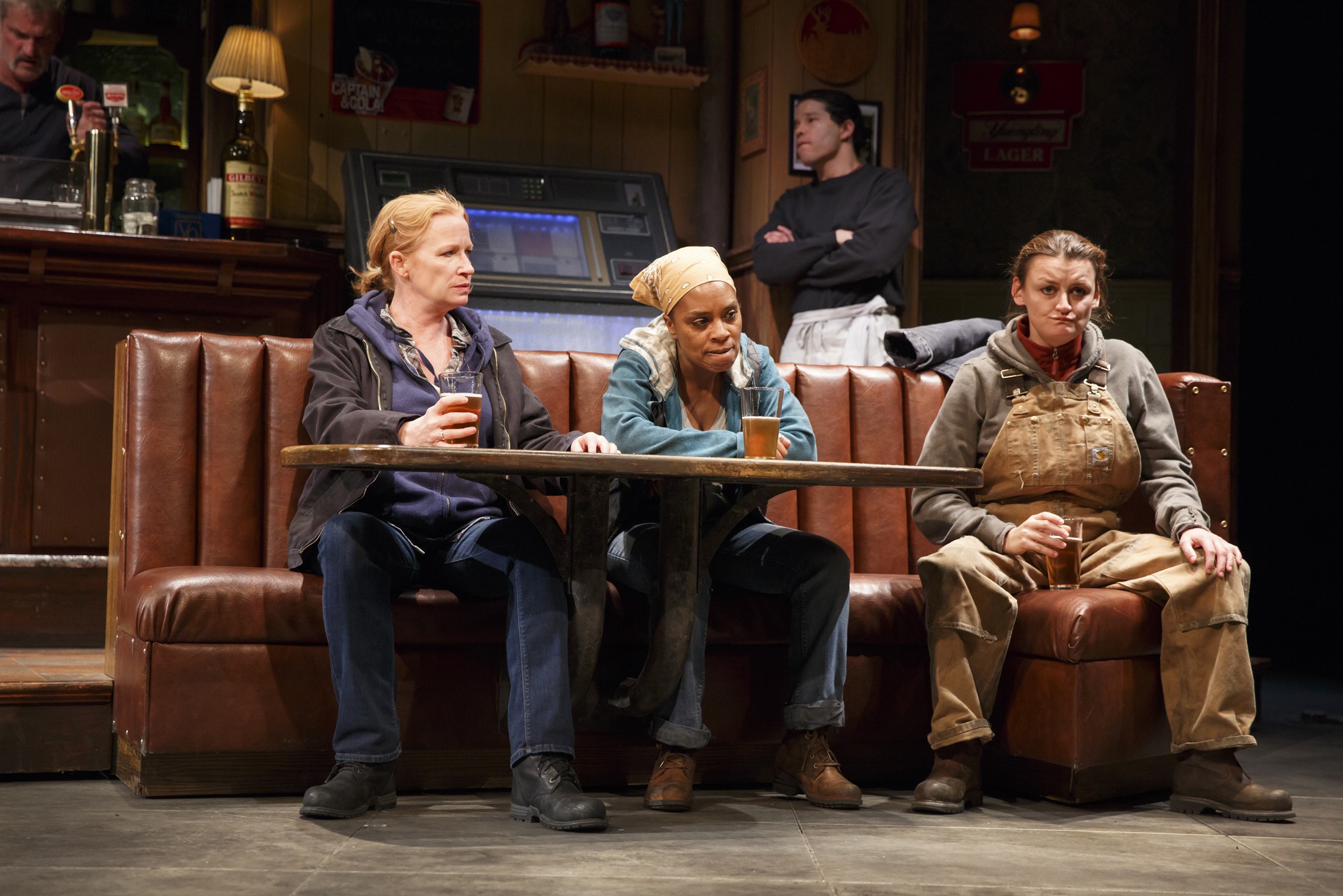 Sweat opens in 2008, when two young men — one black, one white — have just been released on parole. Then it zooms back to 2000, when massive layoffs at the steel plant were only rumored and factory workers had enough paycheck left over to stand rounds of drinks at the local bar. As the play moves forward and backward in time, it shows how social and economic stressors close in on these characters.

Though Sweat culminates in a detestable act of violence, Nottage traffics in a kind of flinty sympathy. She didn’t want the play to “sit in judgment of anyone,” she said. “I didn’t want to demonize anyone. All of us in certain circumstances would make very compromised choices, and this environment breeds a kind of ugliness that was unfamiliar to even the people who were becoming ugly.”

The play had its world premiere in 2015 at the Oregon Shakespeare Festival, which had co-commissioned it, and subsequent productions at Arena Stage, in Washington, D.C., and at the Public, where it opened a few days prior to the election. Before Donald J. Trump won the presidency, the play had seemed an interesting piece of sociology. After the election, it became something more urgent, an explanation for why so many of the swing states went red and of how working-class desperation had fueled Trump’s victory. (Reading itself, which has a majority-Latino population, voted for Hillary Clinton, but its surrounding county was heavily red.)

Carlo Albán, an actor who has been with the play since its first draft, recalled how, on the day after the election, the audience “just looked stunned. There was just a look of sadness and regret and — I don’t want to say horror, but a feeling of recognition. It resonated differently. It was real. It was personal.”

“It was somehow helpful to people,” Whoriskey said, remembering those November performances. “There was a need that was being filled by the telling of the story.”

Not all of Nottage’s plays are overtly political, but they are all concerned with the stories we tell ourselves and one another. She is an artist of intense and abiding moral curiosity, a quality that links graceful drama (Intimate Apparel) to knockabout comedy (By the Way, Meet Vera Stark) to rousing tragedy (Ruined). In exploring why we behave as we do, she also wonders how we might behave better. Her plays are too sophisticated to offer bullet-point solutions, but there’s an enduring suggestion that if we, as a society, listen and care and try to forge connection, we will all be better off. (That listening, caring, and connecting are what good theater asks for and repays is probably not an accident.)

Having spent years listening and caring in Reading, she is now asking Broadway audiences to do the same. As with other Public Theater shows that have moved to Broadway recently (Fun Home, Eclipsed, Hamilton), minor adjustments have been made to the play — some sharpening, some streamlining. But the changes are subtle. And although a Hollywood star can give a play a serious boost, Nottage and Whoriskey didn’t want to replace the actors who had worked so hard downtown. (One role has been recast, owing to an actor’s prior commitment.) Stuart Thompson, a lead producer of the show, didn’t pressure them. “There’s no role in this play that requires a star,” he said. “It really is an ensemble play.”

Some more significant alterations have been made to Studio 54, such as removing a couple hundred seats and building sidewalls to create a more intimate experience. Eustis had worried about “the cognitive dissonance of Sweat being in Studio 54, the working-class rage in a nightclub.” But he has found “it sits in the space beautifully. It’s been beautiful to watch this show hit a Broadway audience. You can tell this audience knows they’re seeing something to which attention must be paid.” 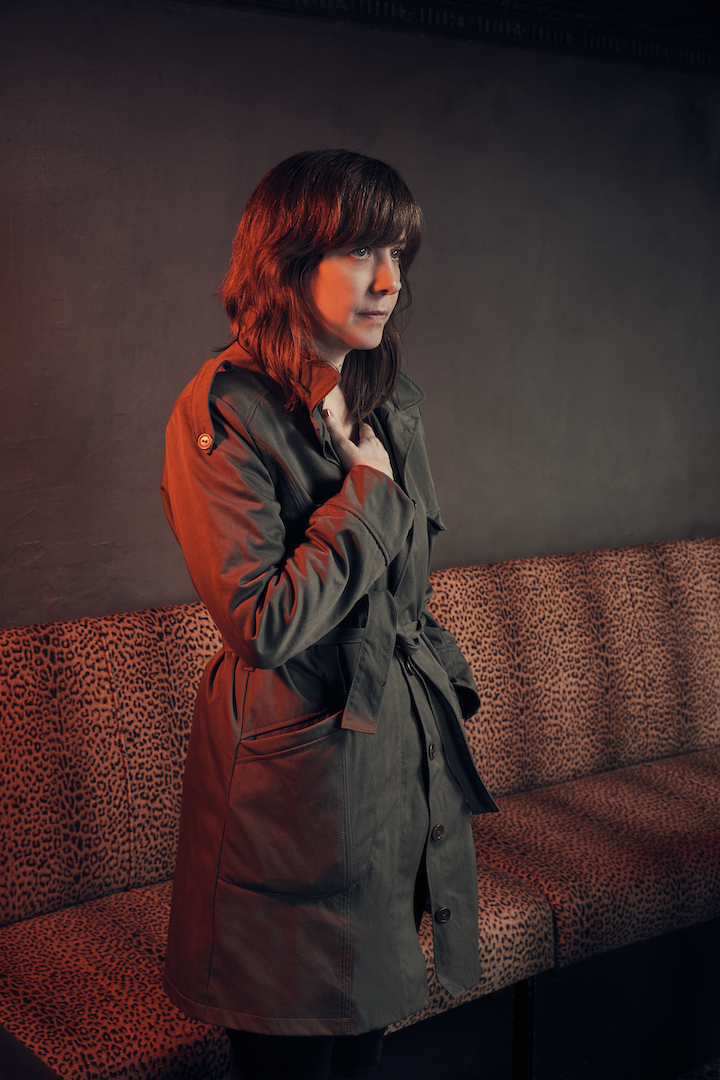 At a recent performance, the audience was unusually vocal for a serious play. There were lots of audible oohs and ohs and uh-uhs, as well as sharp intakes of breath when Albán, as a Colombian American from an immigrant family who is snubbed by the white workers, says, “If they don’t see me, I don’t need to see them.” The play spoke to the Broadway audience. It mattered. (Critics, however, have been somewhat more muted, with the Times describing the play as “steeped in social combustibility” yet “too conscientiously assembled.”)

But Nottage and Whoriskey have already faced an audience to whom it mattered more. In December of 2016, just after the show closed at the Public, Nottage, Whoriskey, and the cast headed back to Reading to perform a staged reading of the play. Albán remembered feeling nervous before that show, knowing he’d soon be reciting his lines to the people who had inspired them, “speaking for them and representing them. If we’re not being truthful they’re going to know, they’re going to let us know.”

Instead, the audience rewarded the performance with a standing ovation and stuck around for a talkback. “Afterward it felt like a revival. During the talkback, people actually stood and testified,” said Nottage. “Everyone told their stories; everyone had a story.”

Eustis is hatching plans to bring the staged reading of Sweat to other deindustrialized cities. “That is going to happen or I will eat anything you tell me to,” he said. Meanwhile, Nottage has already been inspired to write another play about Reading. This one is a comedy, set in a sandwich shop. And later this year she’ll open THIS IS READING, a performance installation set in a former railroad station that will “tell the story of folks currently living in Reading.” 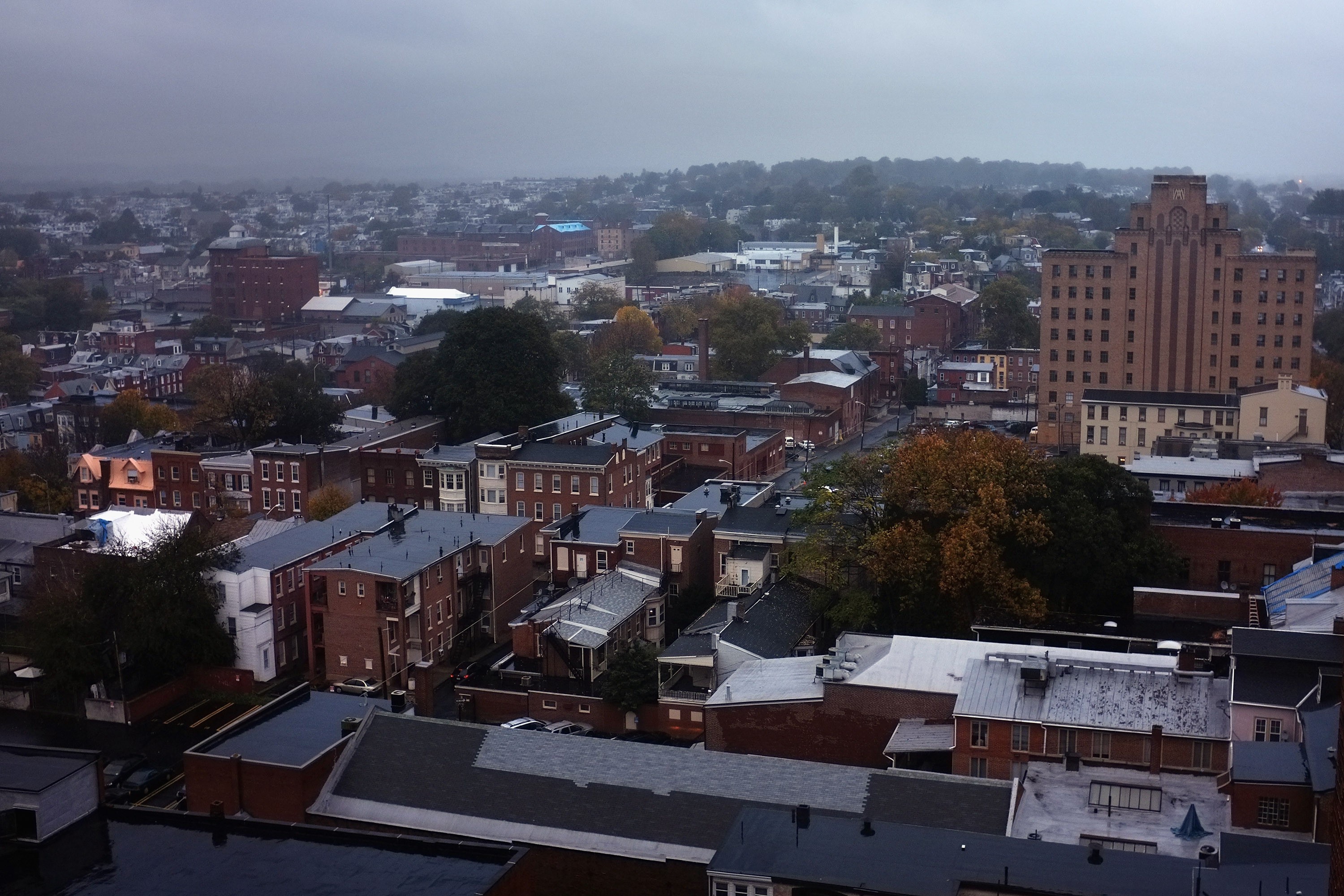 Santo D. Marabella, a professor of management at Moravian College, who grew up in Reading and is its film commissioner, has seen the play several times, including the Reading performance. “The energy was amazing,” he recalled. “The majority of the folks who saw it were really inspired by it.” He found the play something of a social wake-up call. “For me, the play was the beginning of seeing parts of the community that I hadn’t seen and couldn’t ignore,” he said.

On the day of the breakfast interview, as Nottage and Whoriskey ate their eggs, a busload of people were already en route from Reading to the theater district. They’d been invited to see the show in its swank Broadway home. Whoriskey met with them afterward. They’d enjoyed it, they told her. They liked the specificity of the place-names — Sneaker Villa, Pomeroy’s — and the attention the play trained on their city. (Things have been looking up for Reading recently: Jobs have grown in Berks County, with six hundred added in 2015.)

There’s a cultural exchange at Studio 54. Broadway audiences who might not have thought they could empathize with a marginalized steelworker or an opiate addict or even a strikebreaker were finding that they could. Because of Nottage’s play, people could reach over, metaphorically, to someone else’s table, tasting food they hadn’t thought to try.

That’s probably a good thing for Broadway. For the country, too.

“Empathy is the key to breaching the divide,” Nottage said over breakfast. “We are all part of this American contract.” 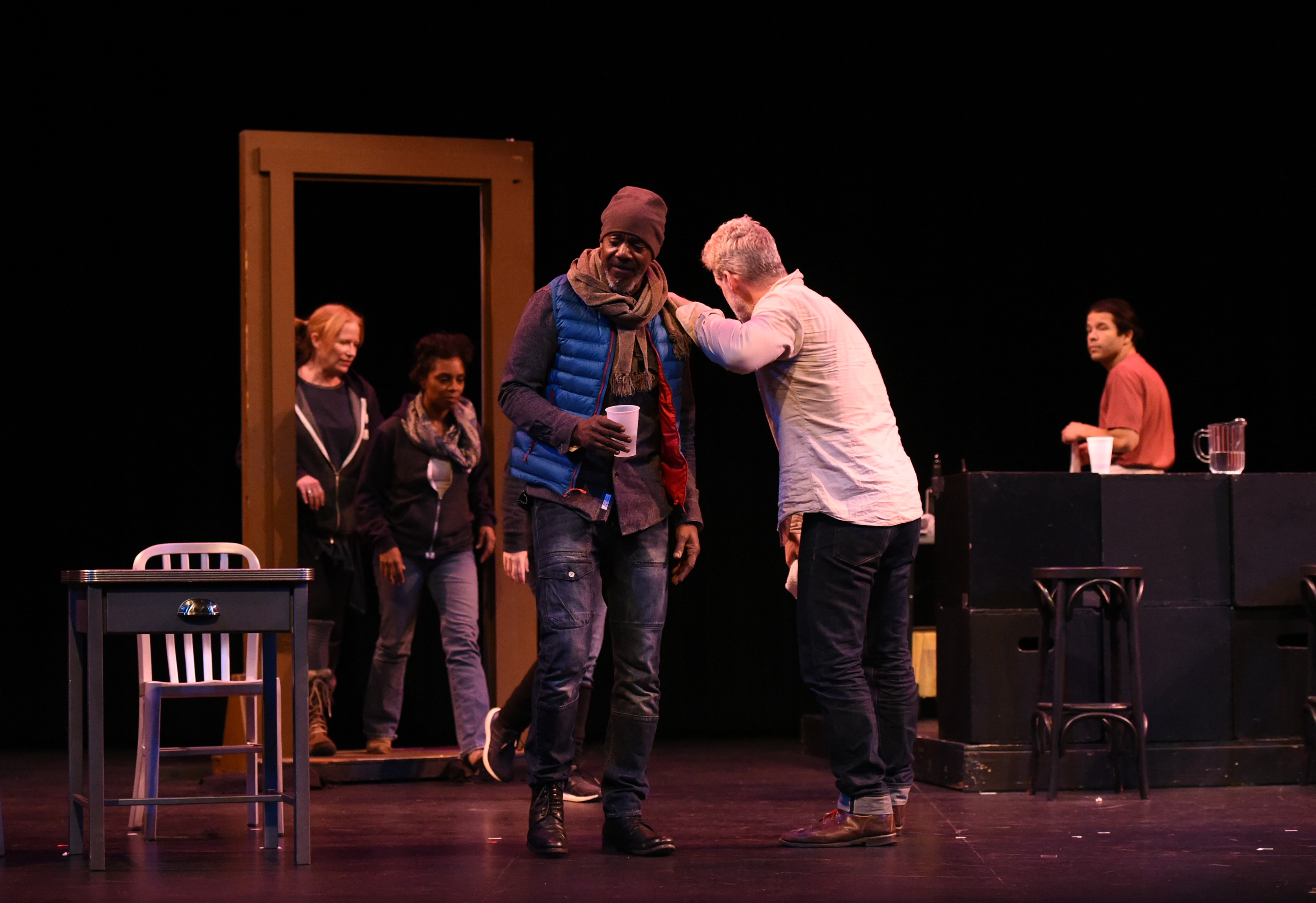