St. George, the most accessible entryway to Staten Island — and the most culturally diverse and progressive — has developed at a snail’s pace over the past decade, and Staten Islanders tend to like it that way. Though cranes now hover above a mass of construction as developers seek to transform the neighborhood, housing is still affordable (roughly half of what you would spend in Manhattan per square foot).

Much like the Southie neighborhood of Boston, Staten Island is resilient, tough, working-class, predominantly Roman Catholic, and not changing as fast as its city cousins for certain economic, political, and geographic reasons. St. George, meanwhile, is a diverse hodgepodge of people — immigrants from Latin America, Trinidad, and Sri Lanka, along with many Brooklyn and Manhattan émigrés who found themselves priced out of their “cooler” New York neighborhoods. But beyond the cranes and developers’ dreams are the places we like to think of as some of New York’s best establishments.

At first glance, this unassuming brick building just a stone’s throw from the St. George ferry building seems an unlikely home for a lighthouse museum: Where’s the lighthouse? Pay the very reasonable admission fee of $5 (only $3 for students!) and a well-informed curator will tell you the history of this cluster of buildings — constructed in 1862 to fabricate lighthouse lenses, anchors, buoys, and other maritime equipment — as well as answer any relevant questions you might have, such as “How can I become a lighthouse keeper?” (The short answer: Apply, and show that you can climb steep flights of stairs.) As you peruse shelves of antique foghorns and lamps, you just may find a deepened appreciation for these forgotten architectural treasures, or at least for the noble work of the museum guide. 200 The Promenade at Lighthouse Point

When you miss your grandma’s cooking, no other food will do — but Enoteca Maria comes close, with its roster of genuine grandmother cooks. Owner Joe Scaravella started the restaurant in tribute to his own mother, Maria, inviting a rotating cast of nonnas into the kitchen night after night to prepare the lovingly crafted Italian dishes they served to their own families. Last year, international nonnas from Poland, Turkey, Ecuador, Syria, and more were added to the mix, bringing their own recipes for couscous, ceviche, jamba fish, and string hoppers to spice up a menu heavy with Italian standards. Scaravella enjoys the diverse community he’s created: When it was only Italian grandmas, he says, they’d compete with each other — but with so many new dishes and flavors, they just want to sample one another’s cuisine. 27 Hyatt Street

When Staten Island locals conducting business at the courthouse or town hall find themselves in need of a break, Rispoli Pastry Shop provides a cheap cup of hot, fresh-brewed coffee with a perfectly chewy pinole cookie on the side (or a luscious, many-tiered slice of carrot cake if you need to make up for a particularly bad day). These pastries inspire customers to speak in the language of addiction: A man in a business suit approaches the counter declaring he needs a fix, then orders a dozen sfogliatelle and a cream-filled lobster tail. The line moves with wonderful efficiency, unless someone is trying to chat up Elvira, Rispoli’s charming shopkeeper. In the summer, try their homemade Italian ices. 29 Hyatt Street

On the border between St. George and Stapleton lies the Staten Island Makerspace, a 6,000-square-foot warehouse where you can learn how to make stained-glass windows, work with wood, weld steel, develop interactive virtual-reality experiences, or construct your own composting toilet. This cavernous industrial space is dotted with evidence of diverse creatorly energies: Handmade chandeliers of gnarled metal abut piles of reclaimed wood and earnest floral quilts. Where else can you sign up for a class called “Women, Welding, and Wine,” where students practice MIG welding and winetasting over the course of four weeks, culminating in the construction of their very own steel wine rack? 450 Front Street

Beneath the sign that advertises “Trinidad-style Chinese Food” lies the best roti you’ll find on the island: a chewy, toothsome flour wrap bundling tender, spicy oxtail, goat, or potato, a flavor paradise that achieves perfection with a few drops of scotch bonnet hot sauce. For those not used to the tricky work of separating bone from meat within a roti roll, the man or woman behind the counter will direct you to a boneless chicken or shrimp roti whose flavor measures up well to the gristlier meats. In this spare, unfussy setting, friendly cooks fry delectable, delicately spiced dough balls and hearty chickpea-filled doubles while you wait. If at all possible, save room for a coconut roll as dessert, best eaten as you stroll down Victory Boulevard in the serene contentment of a meat trance. 65 Victory Boulevard

The reconstruction of Staten Island’s north shore is slowly but surely coming — America’s largest Ferris wheel, an outlet mall, a waterfront village and hotel — with over a billion dollars invested along the coast of St. George, Tompkinsville, and Stapleton. At the vanguard of this reinvention is Flagship Brewing Co., founded in 2013. Its large taproom is set up like a proper indoor biergarten, with a glass partition that overlooks the whole operation. Many seasonal beers are in rotation in addition to glorious standards like Flagship’s American Pale Ale (APA), American Wit, Dark Mild, Metropolitan Lager, and IPA. Flights are recommended for first-timers, and the taproom operates on a coin system: $5 per coin, which gets you one pint of anything on offer. Pizza from Pier 76 can be ordered directly to the taproom via a touchpad on site, and tours, which include a brewery tasting, are offered on Saturdays at 2:30 and 4. 40 Minthorne Street

Formerly known as “The Cargo” (which is what the locals still call it), this bar and bistro located two blocks from the ferry is the gold standard for watering holes in St. George. Despite its new moniker, 120 Bay Café still displays the eclectic local artwork it’s always been known for, including massive murals that cover the entire front and side of the building. The current iteration is gray, with half a man’s face spliced around the building four or five times. But the draw isn’t (just) the artwork, it’s the local beer on tap (Flagship), the comfort food (fried-chicken sandwiches, pierogis, Jamaican jerk pork), and the welcoming local clientele. 120 Bay Street

Minor-league baseball doesn’t get any prettier than this. Located directly on the Staten Island waterfront, steps from the ferry terminal, is the holy home of the Staten Island Yankees (since 2001). Looking out from the stands across the well-manicured field and over the outfield wall, you’ll find an unbeatable view of Lower Manhattan, the Statue of Liberty, and the boats in New York Harbor. The stadium isn’t massive, but neither are the nightly summer crowds that come out to see the players in pinstripes whack balls toward the New York skyline. 75 Richmond Terrace

Located in the former home of the Wu-Tang/Wu-Wear store and continuing the same color scheme (lots of yellow on black) is St. George’s best barbershop, Against Da Grain. The cuts are fresh, the fades are tight, and you’ll come out looking dope a.f. Owner Sean White has cultivated a cool and harmonious atmosphere in his shop, which draws patrons from all five boroughs. Don’t be surprised if you spot Method Man in the chair — White trims a lot of celebrities who’ve walked through these doors. Still, the place remains unintimidating to newcomers. As its website states, ADG promotes “Peace, love & hair grease.” 61 Victory Boulevard

Walk up the hill on Hyatt Street from the Staten Island Ferry and at the top you’ll come to the historic St. George Theatre. If Staten Island feels like a small town, this is its small-town stage. Opened as a movie house for film and vaudeville acts in 1929, it has recently had its marquee and its baroque interior (red carpets, chandeliers, wall murals, sprawling staircase) restored to their former glory. Along with films like The Rocky Horror Picture Show and Grease (with sing-along!), the St. George Theatre is now primarily home to music and comedy acts. 35 Hyatt Street 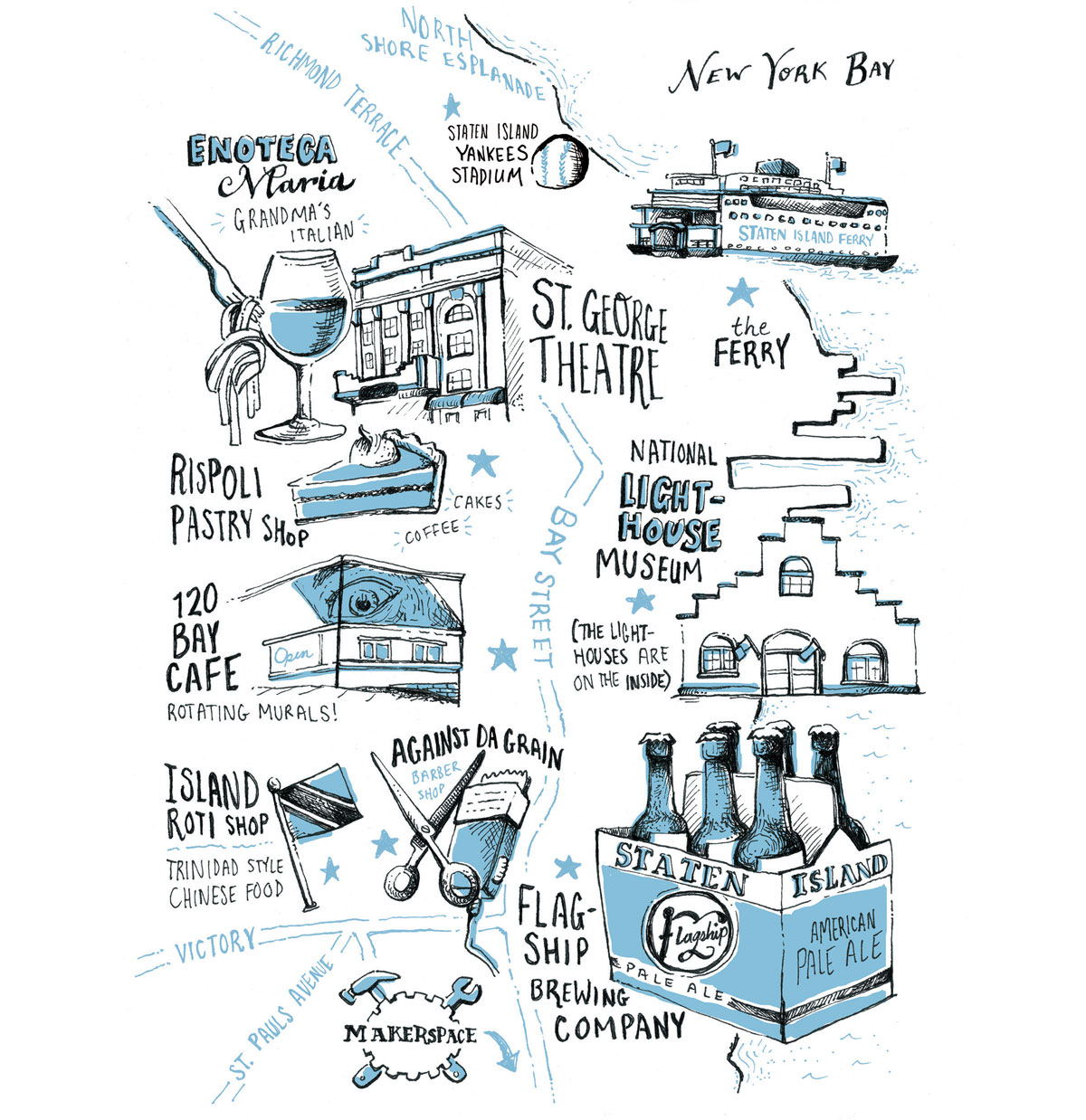