“In the beginning, it seemed innocent enough.” These words open Lynn Hershman Leeson’s Seduction of a Cyborg, a dark tale for the Information Age included in “Remote Controls,” the artist’s second solo exhibition at Bridget Donahue Gallery.

The short video, made in 1994, follows an unnamed blind woman who undergoes an unspecified procedure that grants her sight via computer transmission. At first, she is enraptured by her techno-gift and gazes blissfully into simulated landscapes made of the pixels that beam from her desktop’s screen. But soon she is paralyzed by it, unable to turn away from a flood of images –– no longer just pristine natural vistas, but also scenes of human civilization — that becomes increasingly rapid, indiscriminate, even violent. As Hershman Leeson narrates, the woman bears witness to “the pollution of history,” and with it the pollution of her own body, which weakens and falters under the stress.

This parable of data overload is particularly chilling today, when the internet and media’s capacity to overwhelm, skew, and bury facts is demonstrably powerful. The piece is one of many included in the exhibition to anticipate the emotional and physical consequences of now ubiquitous forms of technology and mass entertainment.

Home Front — completed in 1993, just one year after MTV debuted The Real World — considers how television impels us to dramatize and perform everyday routines. Gallery visitors peek into the bay window of a dollhouse-size home to watch a monitor that loops a video of the house’s inhabitants, an unhappily married couple, bickering and screaming. The film is made for not only our benefit, but also the characters’: As the husband says in an aside to his wife, they are supposed to be taping a video message for his in-laws. Instead, they mug for the camera, using its presence as an excuse to stage a burlesque of heterosexual marriage that culminates in an act of domestic violence.

Just as reality TV makes stars of ordinary people and situations, so does Hershman Leeson’s art make voyeurs and participants of its spectators. Throughout her career, she has experimented with interactivity, frequently collaborating with scientists and programmers to develop new responsive technologies and apply them to the fine arts. Lorna, 1979–84, is the first-ever interactive laser disc artwork, and is shown here at the front of the gallery inside a replica of the eponymous character’s apartment. Visitors sit in a chintzy leopard-print armchair under dim, bordello lighting to play through different menu options with the goal of getting an agoraphobic Lorna out her front door. 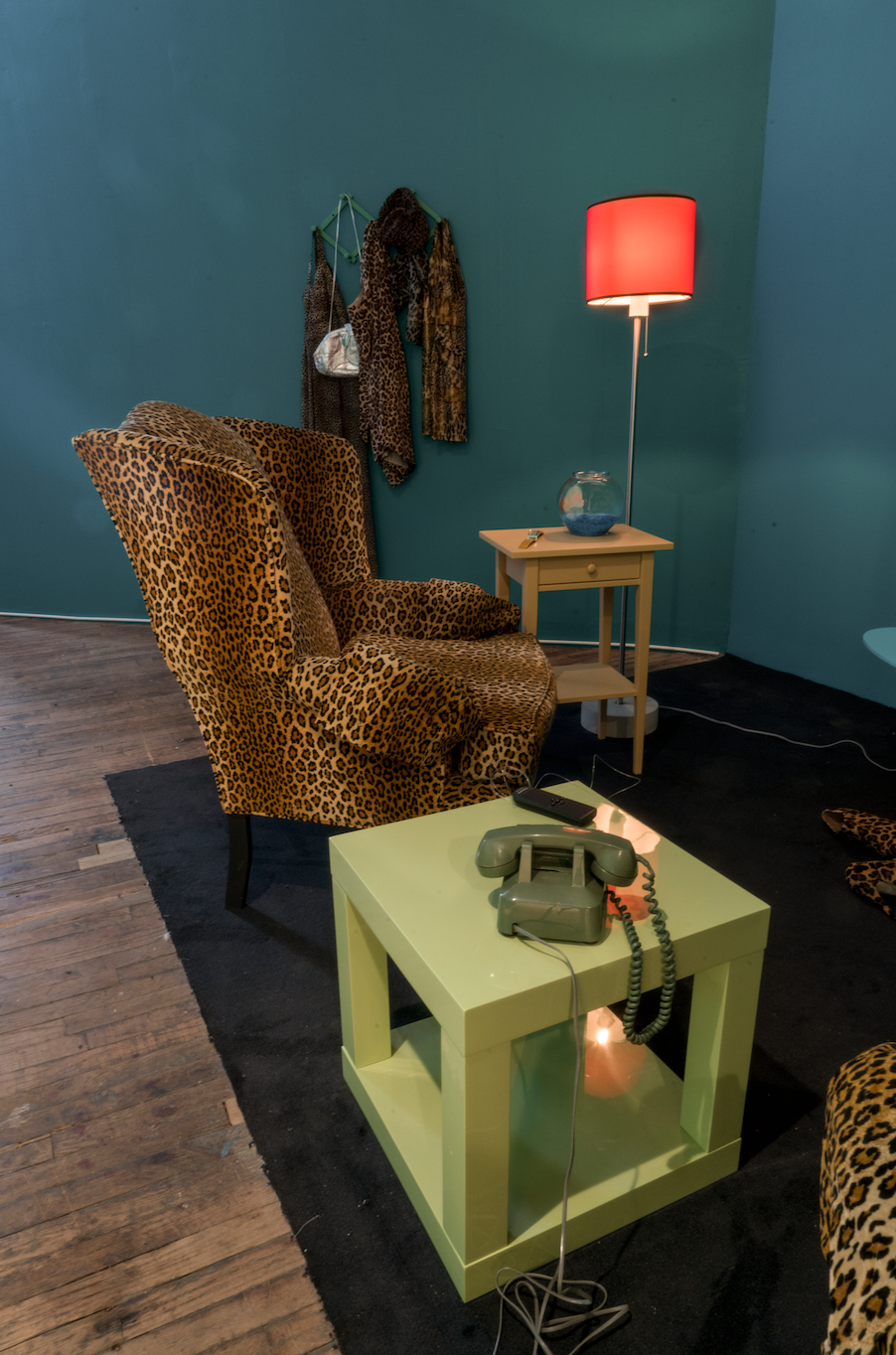 Despite its cheesy, lo-fi quality, the “game” — too elliptical and non-narrative to fully merit the term — remains immersive today. The same is true of Deep Contact, from 1984, which includes an early touchscreen. A Fassbinder blonde in skin-tight eveningwear emerges at the start of the piece with the simple request of “touch me,” then waits for you to tap out your “yes” before leading you into a paradisiacal Japanese garden. Each choose-your-own-adventure style decision from here — to turn left or right; remain in the garden or move to a new location; continue or quit — dictates how far your interaction with this screen siren will progress.

While it is not wrong to call Hershman Leeson’s art and technology prescient, to do so would downplay her accomplishments in both fields. She does not consider her work speculative or sci-fi, but rather sees it as rooted in the current moment. As she said in a recent interview in Artforum, “If you’re dealing with the present…people think that you’re in the future, because they don’t know what’s going on in their own time.”

Her commitment to producing art that reveals the truth of its time explains why she refuses to remove or smooth over glitches left in her pieces from the Eighties and Nineties. It also makes her new installation, Venus of the Anthropocene, worth a serious and considered look. A mannequin with a Frankenstein’s-monster-like open torso and a cheap, ghoulish white wig sits in front of a vanity table strewn with DNA serums. We are invited to peer over her shoulder into a mirror on the wall enhanced with facial-recognition software that guesses our age, gender, and mood. From moment to moment, the answers change: Gaze into the magic mirror from an oblique angle with downturned eyes and you appear to be a sad 34; look again, straight on and with a smile, and become a happy, doe-eyed 19.

I manipulate myself, therefore I am. If this vision of how millennials construct and remix identity — both online and off — feels too inorganic or mechanized, it may help to remember that the line between human and device has always been hazy. After all, even the least sophisticated aesthete among us has the processing skill to take in the shadowy, long-haired figure in Hershman Leeson’s backlit photograph Cyborg Lightbox, 2003–06, and compute it as female.

Then again, this capability may have more to do with social conditioning than biology. After all, what is sexism if not a type of dehumanization that turns women into objects for pleasure and play, or reduces them to datasets like bust/waist/hips? Indeed, it is no coincidence that so many of Hershman Leeson’s avatars and half-human/half-robot protagonists are women. Though we all fall prey to the influence and expectations of the media, Hershman Leeson’s work demonstrates that women may be the most vulnerable. Lorna sits glued to her TV, afraid to venture outside, while the wife in Home Front is a victim of soap-operatic male aggression in her own kitchen. The Venus contemplates genetic modification to improve her looks, while the blind woman’s body fails as a result of her data awakening. Nothing, it seems, is truly innocent.