A day after President Trump issued a sweeping and almost certainly illegal executive order Friday afternoon allowing immigration officers to refuse entry to people from seven Muslim-majority countries—even if they are carrying valid visas, have green cards, are dual citizens, or are refugees—a federal judge in Brooklyn Saturday night imposed a stay on nationwide deportations under the order.

The stay had been requested by a coalition of lawyers and legal groups, including the American Civil Liberties Union, on behalf of a group of people who found themselves living through a very particular nightmare: Having left their points of origin with valid paperwork for entry, they landed in a country made hostile overnight by a stroke of the president’s pen. At John F. Kennedy airport in New York, as well as at LAX, Dulles outside Washington, D.C., and other airports around the nation, an estimated hundreds of people found themselves detained, subjected to extended interrogations, and threatened with being sent back to the countries they had just left.

At JFK on Saturday afternoon, the Voice spoke with a man waiting for the arrival of his 68-year-old Yemeni mother who, he was being told, was shortly to be put back on a plane to Saudi Arabia. “She is 68 years old, diabetic, with high blood pressure; she takes four kinds of medicine,” the man said. “I’ve been trying to get a visa for her for the last two years. Finally, January 22, I got it. Now she’s here, and they’re saying they’re going to return her. What are they afraid about a 68-year-old woman?” 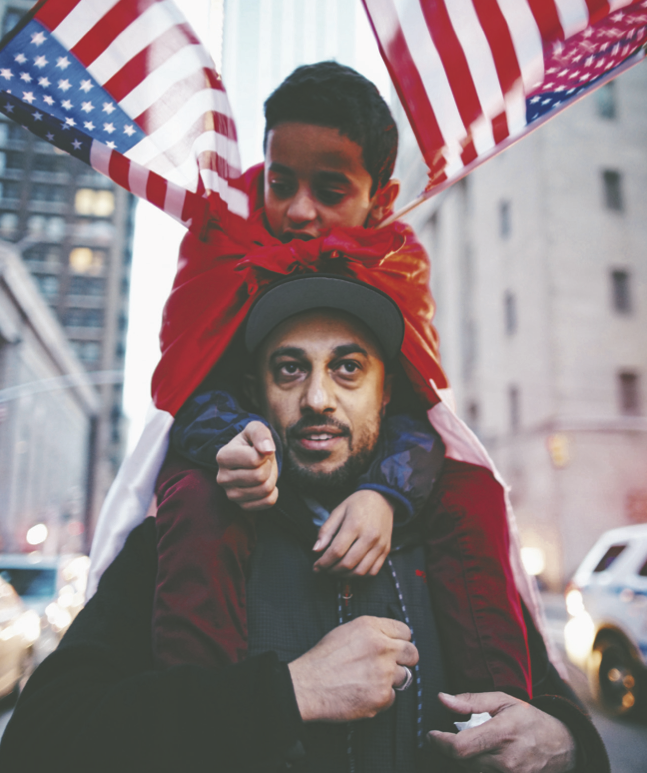 Arrivals lounges in terminals 1, 4, and 7, were filled with staff attorneys and volunteer immigration lawyers from the ACLU, the International Refugee Assistance Project (IRAP) — an organization that helps refugees secure legal assistance — and elsewhere, all scrambling to meet with those being held, mostly without success. Running between Customs and Border Control (CBP) officials and relatives waiting to see their loved ones, they hastily compiled habeas corpus petitions contesting the government’s right to hold them.

Meanwhile, protesters were gathering. Outside JFK’s Terminal 4, a steady stream of New Yorkers responding to calls by Make the Road New York and the New York Immigration Coalition swelled to over one thousand people. Chanting “Racists out! Refugees in!” and “Fuck the wall, we’ll tear it down!” the crowd spilled out beyond the police barricades erected to contain it, choking the sidewalk and filling parts of an adjacent parking garage.

“Muslim and unafraid, let them in!” read a sign carried by Lena Afridi, thiry, of New York. “My community is under attack,” she said. “I just want to express solidarity with people who are going through a really tough time.”

“You have to be here,” said Frank Duffy, 41, of Staten Island, who carried a sign that read No Mandate For This. “We’re at a critical moment. We’re quickly losing our sense of who we are.”

As the protest mounted, the New York Taxi Workers Alliance called for a temporary strike at JFK from 6 to 7 p.m. With more and more New Yorkers heeding the call to trek out to the airport on a cold Saturday evening, Port Authority police began refusing to allow people to board the AirTrain that connects the subway to JFK. The Port Authority did not respond to a request for comment from the Voice, but soon posted an explanation of the policy on Twitter: “The Port Authority of NY & NJ respects the right to protest. AirTrain JFK controls in place for public safety, due to crowding conditions.” Facing mounting outrage on the scene and online, the Port Authority police reversed themselves and opened up access to public transit again. Governor Andrew Cuomo took credit for the change.

Still the crowd grew. As police in helmets with truncheons and plastic handcuffs began to assemble at the periphery, word circulated among the protesters that the lawyers’ furious work inside the terminals might be paying off: A federal judge had agreed to hear an emergency petition for an injunction ordering the government not to send back or detain anyone on the basis of the executive order. A second crowd of protesters and journalists soon began to form outside the federal courthouse in downtown Brooklyn.

The petition, filed by lawyers representing the detained individuals, simply sought a temporary injunction until the court had time to rule on the larger issues surrounding the executive order’s dubious legality. But as one of the first legal challenges to the Trump administration’s efforts to remake American policy, the last-minute hearing was historic, and the mood in the courtroom was electric.

Lawyers from the United States Attorney’s Office and a Department of Homeland Security official argued that the petition was moot, since the two named petitioners had been released a few hours before. But Judge Ann Donnelly cut through that argument, noting that an entire category of travelers — between one hundred and two hundred, by immigration lawyers’ estimate — were in a similar position, and would likely win certification as a class for the purposes of a lawsuit. “I’m assuming that we’re going to have more people this order is going to have an impact on, correct?” she asked. “Yes, your honor,” government counsel conceded.

Lee Gelernt of the American Civil Liberties Union, one of the groups representing the detainees, told Donnelly that customs officials were also refusing to give his team a complete accounting of how many people CBP was holding under the executive order. Government lawyers protested that they were unable to do so. Donnelly was unimpressed. “I don’t think it’s unduly burdensome to identify the people we’re talking about here,” she said, directing the government to make that available to the petitioners. A little after 9 p.m., Donnelly signed the stay. The news was greeted with cheers by thousands of protesters outside the courthouse and at JFK. 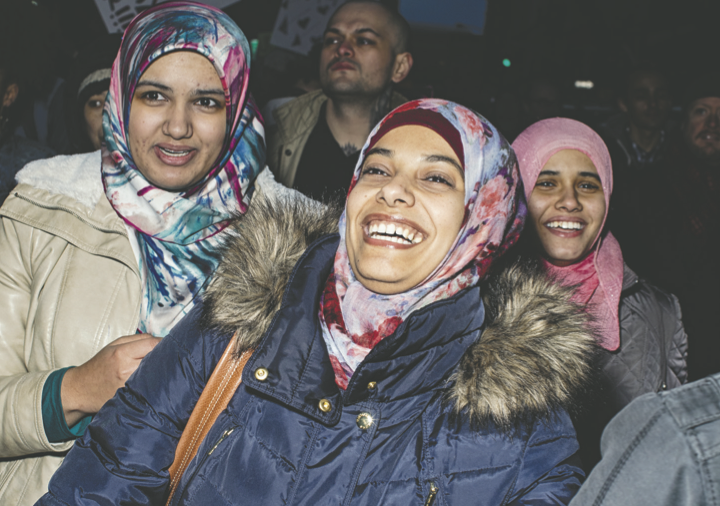 Before the night was out, federal courts in Virginia, Washington, and Massachusetts had issued their own orders partially restricting implementation of the executive order. The Virginia ruling expressly directed customs officials to allow lawyers to speak with the the people detained, but CBP officers at Dulles refused to comply, setting the scene for a constitutional crisis as agents of the executive branch defied an order from the judiciary.

The judicial rulings were very limited, mostly to those who, by an accident of timing, arrived in the United States immediately after the travel ban was implemented. A broader challenge to Trump’s executive order won’t come before Donnelly until February 21. Until then, those outside the country (or contemplating leaving it) with valid visas will remain unable to get in.

By Sunday afternoon, the public protests against the order had grown exponentially. Tens of thousands of New Yorkers gathered in Battery Park, and thousands more took part in protests in Boston’s Copley Square, outside the White House, and elsewhere around the country.

Meanwhile, as the crowd outside JFK’s Terminal 4 dwindled, the number of volunteer lawyers inside had ballooned. Dozens of attorneys had turned Terminal 4’s City Diner into a free legal clinic, but were unable to see or speak to the people they were there to help.

“We don’t know what’s going on, and that’s what scary and difficult,” said attorney Steve Golden, who had been there for hours helping direct the efforts. “We don’t have eyes inside.” As a result, it was impossible to say exactly how many people had been detained at JFK, or how many had been deported before Donnelly’s ruling.

Golden added that he knew of one woman who had been detained at JFK “for quite some time” who had her visa canceled after she signed a piece of paper. “She was told, ‘sign this, or consequences,’ ” Golden said. “I saw her visa and it had the word ‘canceled’ stamped on it. That’s going to be a legal issue that’s going to be dealt with in due course.”

As of Monday, the number of people still detained at JFK remained unknown, despite Donnelly’s direction for CBP to disclose who is being held. Two people had been deported, including Dr. Suha Abushamma, a 26-year-old Sudanese citizen traveling from Saudi Arabia, doing her residency at the Cleveland Clinic.

“The number constantly changes,” Brooklyn congressman Hakeem Jeffries told reporters inside the terminal. “An individual is detained, they get released, they come out, they’re reunited with their family. I go back in and have a conversation with the Customs officials, they tell me that additional individuals have just arrived who are being detained.”

At least customs officials agreed to speak to Jeffries — at Dulles, officials refused to meet face-to-face with members of Congress, or to allow detainees to see lawyers. This was a direct contravention of another federal court ruling made on Saturday night, and made clear how haphazard the executive order and its enforcement were.

“What we’re seeing this weekend is a pretty ad-hoc, chaotic response from Customs and Border Protection,” said Betsy Fisher, an attorney and policy director at IRAP. 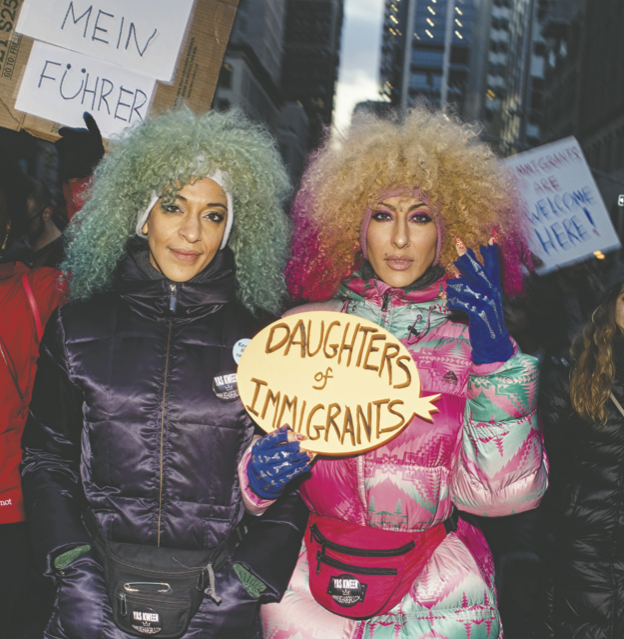 In fact, on Sunday morning, a senior White House official said that the judge’s stay “does not undercut the President’s executive order,” but by shortly after 5 p.m., John F. Kelly, the secretary of the Department of Homeland Security, insisted that green card holders and other lawful permanent residents would not be affected by the executive order. That statement ran counter to the order’s actual language, as well as to its initial implementation.

“Donald Trump is completely out of control,” Jeffries told reporters. “It’s not clear what [Trump’s] intended outcome is because I’m not sure that the White House knows what they’re doing. What is clear is that the Trump administration has visited upon the American people a level of chaos and carnage that has never been seen before in the first week of an administration.”

Later that day, tens of thousands of people filled Battery Park for a protest organized by many of the same groups that had drawn crowds to JFK the day before. Billed as the “No Ban No Wall” protest, the permitted event featured a speaker roster heavy with elected officials, including Mayor Bill de Blasio, and senators Kirsten Gillibrand and Chuck Schumer of New York and Cory Booker of New Jersey.

Schumer’s strident speech decried Trump’s recent executive orders: “They’re bad for America, they’re bad for humanity, they’re bad for our national security, and they are against everything that is American.” The senator said he had spoken Sunday with Homeland Security director Kelly. “I have told him in no uncertain terms that he has a moral obligation to go to the president and tell him to rescind these orders.”

As the senator wound down his speech, he was nearly drowned out in parts of the crowd by a chant of “Vote down his nominees!”

Linda Sarsour, the director of the Arab American Association of New York, picked up that theme, warning elected officials that they must take a hard line against Trump’s attorney general nominee or face the consequences. “Any member of the senate or congress who votes for Jeff Sessions is not gonna have a seat in 2018,” she promised.

After several hours of speeches, the massive crowd slowly unspooled out of Battery Park, filling the streets of Lower Manhattan as it stretched north, marching to Foley Square. As dusk fell, the crowd dispersed, with some heeding the call of organizers who asked them to return to JFK, to press for the release of those detained and keep the gates to New York City open.