Planned months ago and innocuously timed for Halloween, “13 Cats,” already under way at BAMcinématek, uncannily arrives at a high moment of puss politicization. The tabby with bared fangs that dominates the “Pussy Grabs Back” meme reminds us that it is now, more than ever during these waning weeks of our long national nightmare, a sociopolitical imperative to assume a kitty as your spirit animal. The BAM series provides an array of alluring totems to choose for your cat fancy.

A feline, or at least its silhouette, looms large during the opening credits of B-movie maestro Edgar G. Ulmer’s The Black Cat (1934; screening October 30), but the animal proves largely incidental after that. The end of the intro sequence loftily — and misleadingly — announces that the bizarre, baroque project was “suggested by the immortal Edgar Allan Poe classic,” though the true source text seems to be Aleister Crowley’s vision board. Ulmer’s was the first of eight movies to pair Bela Lugosi and Boris Karloff, here playing characters more outlandish than their signature gothic-horror roles. Lugosi’s Dr. Vitus Werdegast has returned to Hungary to exact revenge on Karloff’s Hjalmar Poelzig, an architect now living atop the ruins of the fort he commanded during the Great War. In the basement of the art deco redoubt, Poelzig visits the glass-coffin-encased corpse of Mrs. Werdegast (and those of other embalmed blonde beauties); upstairs, he shares a bed with the physician’s daughter while leafing through Rites of Lucifer. Not even Werdegast’s severe ailurophobia, triggered whenever one of the master builder’s small herd of handsome ebony pusses is in sight, stops him from his mission of flaying his nemesis alive. The house pets, however, are destined to remain “deathless,” even when the citadel goes up in flames.

While the cats scampering across the marble floors in Ulmer’s film aren’t gendered, the explicit twinning of felines and ferocious female sexuality drives Cat People (1942; showing October 29), directed by Jacques Tourneur, another low-budget specialist. “I’ve fled from the past — evil things, evil,” the Serbian-born Irena (Simone Simon), a fashion illustrator first seen sketching a black panther at the zoo, tells “good, plain Americano” engineer Oliver (Kent Smith), soon to be her husband in a mariage blanc. That evil includes ancient compatriots who practiced dark arts and worshipped kitties; convinced she’s a descendant of this sick bloodline, Irena refuses to give in to sexual arousal for fear that she’ll be transformed into a lethal big cat. But she can’t remain wholly in control of other all-consuming passions, like jealousy and rage, which trigger her metamorphosis and her bloodlust. (Irena’s deadly four-footed incarnation isn’t the only felid to be found in Tourneur’s chiller: An all-white fluffball named John Paul Jones resides in Oliver’s office, and a few cameoing kittens never miss their marks.) 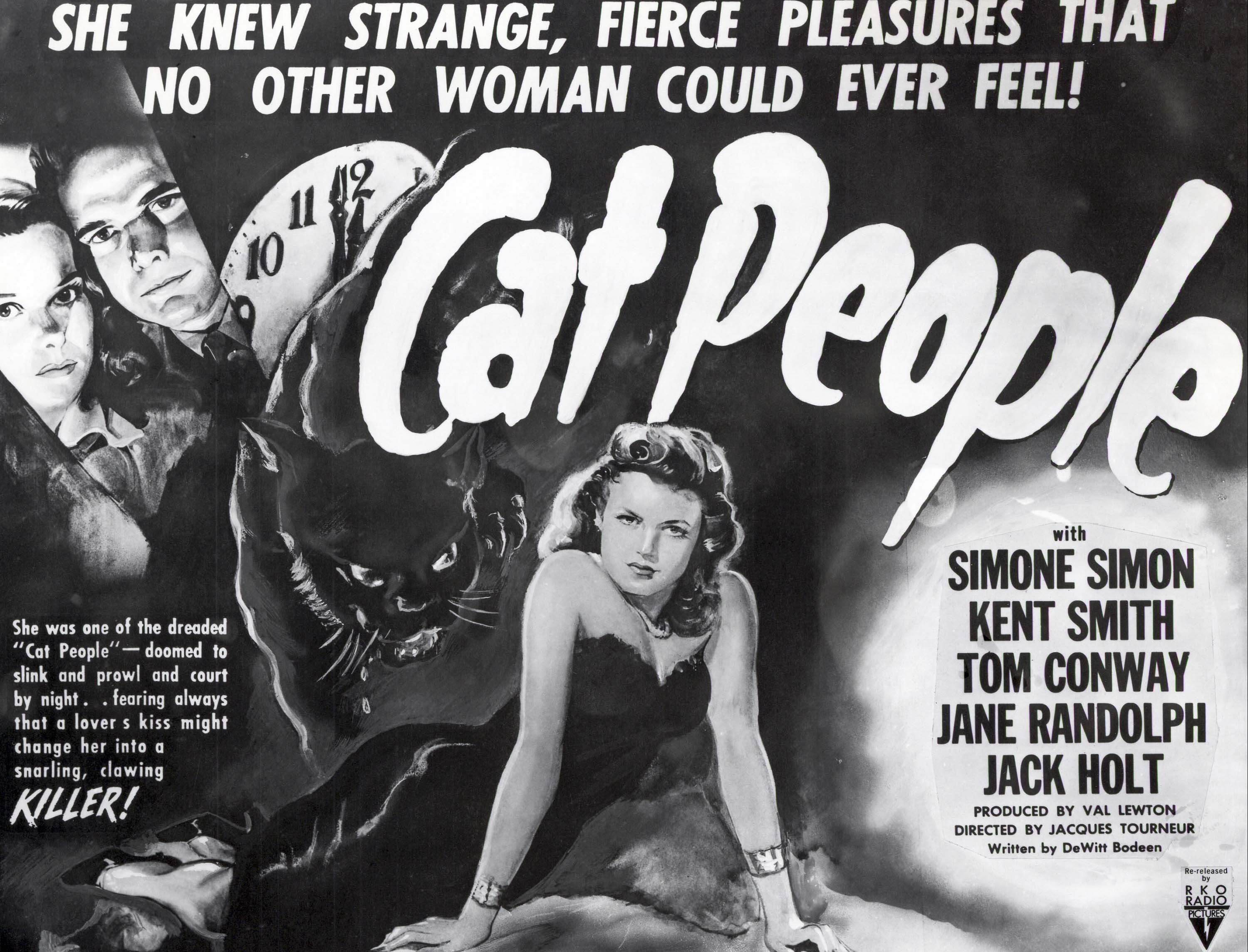 Paul Schrader’s Cat People (1982, screening October 29–November 1), his swampy, salacious, New Orleans–set remake of the 1942 film, dramatizes — +and then some — the backstory that Tourneur’s original could only decorously allude to. Here the virginal Irena is played by Nastassja Kinski, just a few years removed from her breakthrough performance as another innocent in Roman Polanski’s Tess (1979). Arriving in the Louisiana city from some unnamed country, Irena is greeted at the airport by her cracked brother, Paul (Malcolm McDowell). He explains to his sibling that she is part of an “incestuous race” that originated with an ancestral mother who engaged in sexual congress with a black panther — an unholy pairing illustrated in the film’s feverish prologue. Paul’s leopard avatar maims and murders various bedmates in French Quarter inns, while his sister’s shadow self is awakened by her desire for zoo curator Oliver (John Heard). After Irena tastes the blood from her punctured maidenhead, her appetites — for sex, for human flesh — become unslakable. (Not included in the series, another spectacularly lurid drama set in the Big Easy, Edward Dmytryk’s Walk on the Wild Side, from 1962, begins, appropriately enough for a film centering on a cathouse, with a magnificent black puss on the prowl, slinking in step to Elmer Bernstein’s jazz score as the Saul Bass–designed titles list the star-glutted cast.)

In Tourneur’s film, Irena’s big-cat alter ego is killed in the final scene; in Schrader’s, she is caged. The most indomitable shape-shifters in the BAM retrospective are the wraiths in Kaneto Shindo’s chimerical monochrome marvel Kuroneko (1968, showing October 28–November 2). Yone (Nobuko Otowa) and her daughter-in-law, Shige (Kiwako Taichi), vow “to kill samurai and drink their blood,” retribution for their rape and murder by a dozen-plus warriors in the opening scene. Infused with pussy traits and powers, these balletic ghost-face killers leap, fly, and somersault through the air, luring members of Japan’s military nobility to their bamboo lair with promises of sake before they savage their victims’ throats like lavishly kimonoed mousers. Based on a Heian-period folktale, Kuroneko may be set nearly a millennium ago, but it points to an indisputable truth today: The future is female, and the future is feline.