In response to a Voice story revealing that his administration was going forward with a previously-shelved Bloomberg-era plan to build a 1,489-bed jail on Rikers Island, Mayor Bill de Blasio appeared to hedge.

“I don’t know of any new facility being constructed on Rikers Island,” he said yesterday at a press conference in Brooklyn. “I know there’s work being done on existing facilities, but let’s have folks who are more expert than me speak to that.”

Ground for the facility was broken during the last days of the Bloomberg administration in December of 2013, but the project was put on hold “to reassess the purpose and usefulness of the facility,” according to City Council reports from 2015 and 2016.

The city’s Independent Budget Office confirmed to the Voice this week that of the $529 million budgeted for the project, $95.4 million had been committed, and $23.7 million had been spent. Photos of Rikers Island showed that large tent structures had recently been removed to prep the site for construction. A former high-ranking City official told us that the actual cost of the jail would be closer to $1 billion.

“Work is progressing while the Administration continues to refine its plan for the site to reflect the latest in correctional design and programmatic use,” mayoral spokesperson Freddi Goldstein told the Voice.

Asked to square her comments and our report with the mayor’s response, Goldstein confirmed that while the land had been cleared in order to give workers access to underground infrastructure, “construction remains halted.”

Funding for the project remains in the budget. Planning work continues but construction remains halted while the Administration continues to refine its plan for the site to reflect the latest in correctional design and programmatic use. As we are continually working to increase programming and improve mental health services in our jails, we want to ensure that any new facility is equipped for these services and others. It is crucial that we consider the design of this facility within the context of raising standards in all of our facilities.

We asked Goldstein to clarify what the site was being cleared for if not for construction and will update a response. 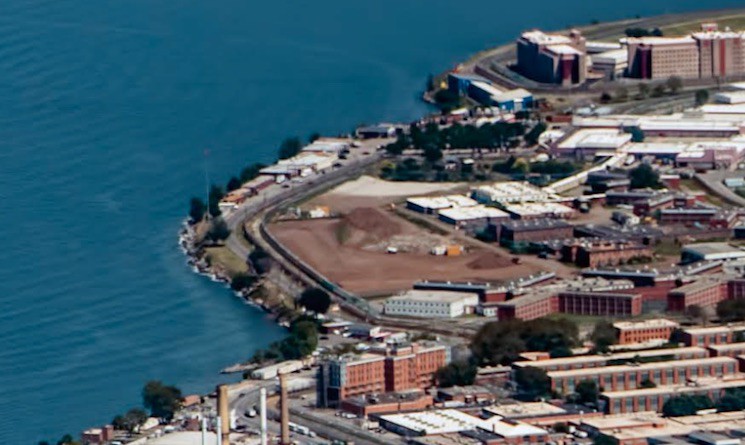 According to the City Comptroller and the website of Queens-based Restani Construction, Restani has won a multi-million dollar contract with the city, and is working on a “New Rikers Island Facility.”

According to the Comptroller’s office, $19.8 million has already be paid to three companies working on the project: 1101 Architects, a civil design firm with experience building prisons, Skanska-Moss, a construction management company, and Restani.

A woman who answered the phone at Restani’s public telephone number confirmed that the company had done “some work” on Rikers Island, but declined to provide her name or details of the work.

Similarly, the website of Skanska-Moss touts its work on a new “Rikers Island Admissions / Mental Health Facility.” The website says that “Moss, as part of a joint venture with Skanska, is providing construction management services to the City of New York Department of Design and Construction on a 1,489 bed, 860,000 GSF secure mental health treatment center and infirmary.”

Yesterday, Mayor de Blasio expressed skepticism about the practicality of closing Rikers Island,  and noted that “my gold standard is my platform and my platform did not say we’re gonna close Rikers.”

“I want to be careful. Look, I get why anyone in a perfect world wants to close Rikers Island,” de Blasio said. “I’ve said I think its a noble idea. I certainly understand why it moves people humanly.”

The mayor added, “But I’ve also said, if you think that closing it and creating a new whole lot of other jails without changing the fundamental culture and the approach to corrections is gonna achieve something I think you’re missing the reality of what we’re facing.”

Some of the confusion may be due to some hair-splitting on the part of the Mayor’s Office. Maybe de Blasio doesn’t consider the new facility “new” because it was approved three years ago under his predecessor. Or perhaps his spokesperson is saying that digging up the earth in preparation for the new jail doesn’t count as “construction.” Regardless, it appears that de Blasio remains committed to building some kind of new penal infrastructure on Rikers Island.