Last week, Hillary Clinton gave a speech associating Donald Trump with conspiracy nuts like Alex “Sneezing Fit” Jones and something called the alt-right, a consortium of out-and-proud racists and misogynists.

The alt-rightist reacted as you would expect — and so did rightbloggers, when an NFL quarterback who refused to stand for “The Star-Spangled Banner” gave them the opportunity.

As longtime readers of this column know, in any American discussion of race rightblogger standard operating procedure is to deny the existence of racism, or to claim that Liberals Are the Real Racists™/Real Sexists (patent pending). The “alt-right,” on the other hand, are out-and-proud racists and sexists who have evolved out of that crouch into a kind of joyful, nihilist, free-association of slurs, Nazi iconography, and coordinated harassment. Whee! So much more fun.

The alt-right movement made a nice hook for Clinton’s speech because, while the sub rosa bigotry of modern conservatism is so common it’s hard for white people to even notice, they might heed the purposefully weird, swastika-flashing, frog-avatared alt-rightists and perhaps be disgusted by them.

Trump brushed off the alt-right association, but he’s vulnerable to it in two regards: One, from his early days as a New York landlord with a literal no-blacks policy to his demand of the death penalty for the Central Park Five (who turned out to be innocent) to his current incarnation as the Republican candidate with the lowest African-American support numbers in recorded history, Trump is not exactly Soul Brother Number One.

Two, Trump just hired as his campaign CEO Steve Bannon, a former executive chairman of Breitbart.com, which in addition to being just one or two ticks left of Stormfront is a constant promoter of the alt-right, as may be seen in this March 2016 item lauding the racist nerds as “young, creative and eager to commit secular heresies.”

Breitbart.com itself aggressively counterattacked Clinton’s speech. They ran headlines like “PENCE: HILLARY CAST ‘RACIST INTENTION’ ON MILLIONS OF AMERICANS WITH ALT-RIGHT SPEECH.” They trotted out Milo Yiannopoulos (a prominent alt-right scam artist whom Breitbart.com promotes ceaselessly) to explain that “geriatric Hillary” — yeah, they’re still on that — tried to “smear Daddy Donald as a bigot” — no, really, that’s what he calls him — but had failed because “I have more employees than there are people who show up for big Hillary speeches. Humiliating! Hillary’s message can be distilled into a simple litany — everything is racist, everything is sexist and everything is Islamophobic. But only if you’re a white male.”

Breitbart.com also mirrored Trump’s claims that The Blacks actually love him: They generously covered Trump campaign manager Kellyanne Conway’s claim that “WE ARE PLANNING TO HOLD MINORITY OUTREACH EVENTS IN INNER CITIES,” which story was promoted on the front page with the headline TRUMP GOES BIG TENT and a picture of a black guy wearing a Trump hat and button (apparently taken in a studio, not from an actual Trump event). These events were not described, nor were the featured performers announced; maybe they can coax TRQ out of retirement.

Others in the alt-right aristocracy tried to ixnay the alt-right-yay on Trump’s behalf. For example, the New Observer gave space to Jared Taylor, proprietor of the white-prideful American Renaissance. Under the headline “Trump is not ‘Alt-Right’ ” (What even is this alt-right-in-quotes thing? We sure never heard of it!),  Taylor gallantly defended Trump from associations with himself and the alt-right, though he admitted his movement shared “common ground with Trump” on immigration policy, and that he found it “encouraging” that “we have a candidate for president who is saying some things that we have been saying for years.” It was all just a “typical lefty campaign ploy,” said Taylor.

Neither Taylor nor the New Observer mentioned that Taylor had done robocalls for Trump during the Iowa GOP primary in January. (“We don’t need Muslims. We need smart, well-educated white people who will assimilate to our culture. Vote Trump.”)

Slightly less fringe right-wing publications also did their part to defend Trump and/or the alt-right. Going on about “THE CRAZY, CONSPIRATORIAL, PARANOID WORLD OF HILLARY CLINTON” at WorldNetDaily was Joseph Farah who, as a leading birther, would know about conspiracies.

Tucker Carlson’s Daily Caller ran an essay by some guy calling himself, I swear to God, “Moses Apostaticus” (I understand his real name is Biggus Dickus but his wife Incontinentia made him use a pseudonym) who advertised himself as “a PhD Candidate (Education) at a major Australian university and…a known voice in the alt-right sphere.” Dickus went on at length about how Hillary was, like, old and a “Cultural Marxist” and the alt-right is the new hip thing.

“Young, white men have had enough,” Dickus declared. “They’ve seen girls favored in the classroom then thrive academically while the boys in the class have languished and become antisocial.” Also, the young white men “see older generations congratulate their own generosity when mass immigration changes the face of Western cities, when those older leftists won’t ever have to live with the consequences.” If you haven’t noticed any of this, you aren’t seeing what Biggus Dickus has seen in his Australian education classes. But you will, cuck!

Traditional rightbloggers came at this in a variety of way. Some just said straight-up that Trump and the alt-right were assholes and they wanted nothing to do with them (take a bow, Caleb Howe!). Others tried to make some old-fashioned rightblogger hay out of the situation.

PJ Media’s Andrew Klavan, for example, said that “The Alt-Right and BLM are One and the Same.” Both sides, bitches! Sure, some people of color get shot by cops, but to side with BLM, Klavan claimed, “you must buy into the ‘statistics’ cited by cynical and deceptive politicians like our president…and ignore the relatively high rates of black crime that make those police actions not just rational but beneficial to the black community.” Once you people realize it’s all your own fault and your sons, brothers, and husbands deserved to die, Andrew Klavan will stop comparing you to racists who not only think you’re inferior, but also (from their Twitter responses) think Klavan is, too. (“Also, you’re a zionist. Show me in a straight line why it’s okay for Jews to have an ethnostate but Whites not to.”)

At Power Line, John Hinderaker went full Real Racist on Clinton. “Her boss, Barack Obama, deliberately fomented racial conflict for the purpose of political gain,” he claimed. For example, “Obama appointed Attorneys General who imposed a racial agenda on the Department of Justice, refusing, among other things, to redress civil rights grievances if they were asserted by whites.” (No link explaining that last bit — but why bother; Hinderaker knows his audience!)

John Sexton at Hot Air said he understood politically why Clinton was “kicking this particular hornet’s nest,” but mused, “this could be very bad news for America and I wonder if Clinton’s camp has even paused to think about that at all. Last year we saw a white racist shoot black church-goers. This summer we’ve seen riots…” All those things came from the acknowledgment of racism, see, and Lord knows what will happen now that it’s been acknowledged some more. 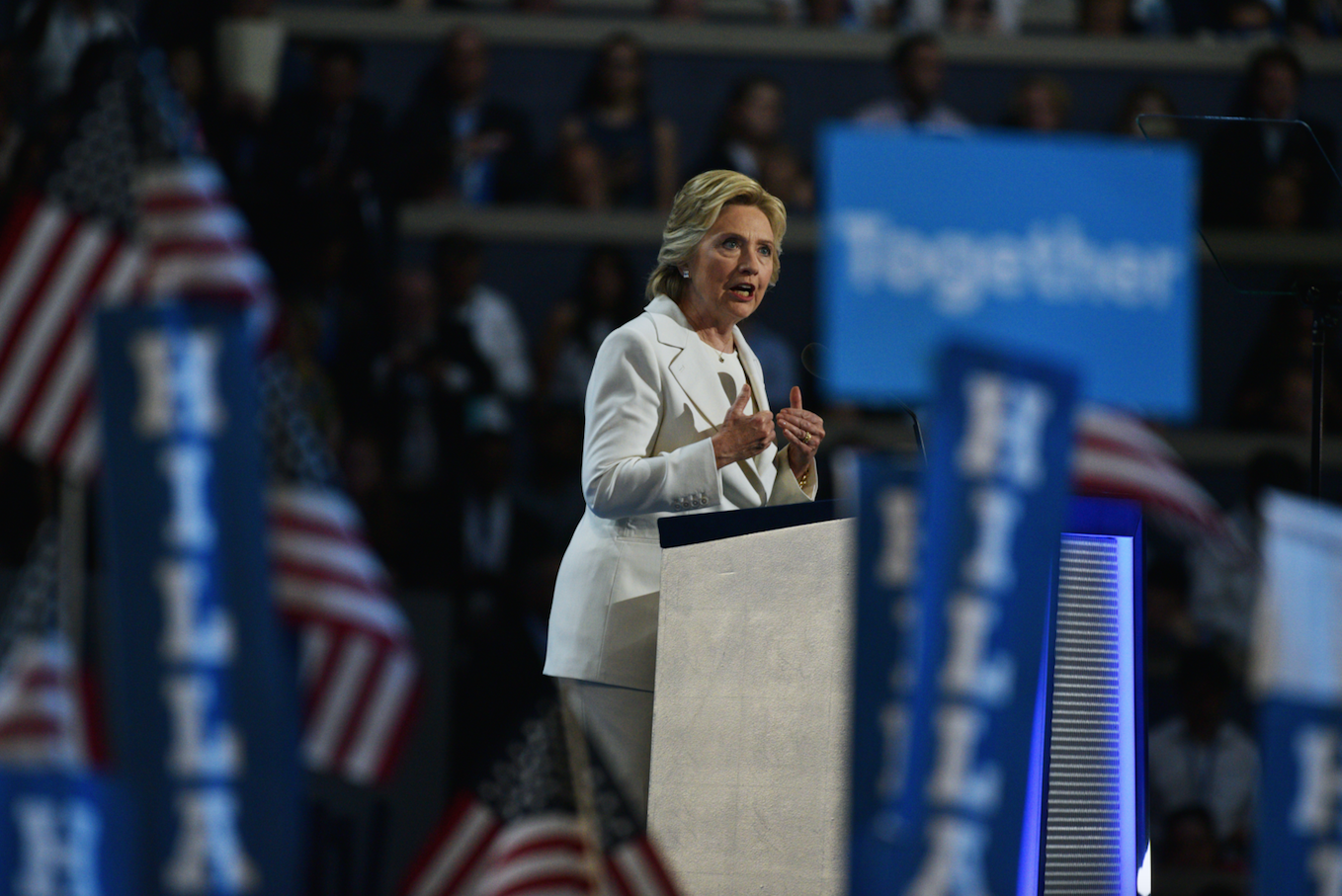 Meantime — word got out that 49ers quarterback Colin Kaepernick sat during the playing of the National Anthem at a preseason game because, in his words, “I am not going to stand up to show pride in a flag for a country that oppresses Black people and people of color.” He also referred in his statement to recent high-profile police shootings of black men.

Kaepernick’s explanation is of a piece with the refusal of the former Lew Alcindor, now known as Kareem Abdul-Jabbar, to go to the Olympics, and the refusal of Muhammed Ali to fight in the Vietnam War — something that, you might have imagined from the reverential reaction to Ali’s recent death, people had gotten over.

But rightbloggers had a shit-fit over Kaepernick. And I’m not even talking about the alt-right types, such as this charmer. (“This n****r Colin Kaepernick has a $114M contract to throw a fucking ball. Yeah, blacks are so oppressed in America.”) I mean the usual crowd in their usual way.

Power Line’s John Hinderaker, for example, came back to the well to repeat the blargh-ument of our racist friend above (“…a 6 year, $114,000,000 contract… When he talks about oppression, I take it Kaepernick is not referring to his own experience”), but without adding the N-word, because he’s a respectable rightblogger, see. Hinderaker also said “this is just one more manifestation of the racial regression that has been one of the worst features of the Obama era,” because it’s the black people who are making things Real Racist.

Weasel Zippers suggested Kaepernick was only saying stuff like this because he’s dating “MTV host and Hot97 DJ, Nessa Diab. Diaz [sic], who is black, is a graduate of UC Berkeley. She spent time in the Middle East as a child and has a common Arab name.” Does Weasel Zippers have to spell it out for you! She probably wears a burkini!

At first, Ed Driscoll of Instapundit — perhaps not wanting to look too Trump-like — took a more-sorrow-than-anger spin. (“I really miss the days when football served as an escape from politics instead of just another front line for the reactionary left.”) But as the subject heated up, he got with the program, informing us that Kaepernick had offended a “Gold Star mother” — you libtards love Gold Star mothers when they’re Muslim, don’tcha? — and praising “this 49ers fan’s understandable reaction, setting alight his Kaepernick jersey in a Drudge-lanched [sic] video.” Like Hinderaker, Driscoll also threw in a crack about “the Obama era” and “all the racial healing.” It’s not our fault, black people — you insist on making this “racism” a thing; we just set fires over your shitty attitude.

To further prove who the Real Racists were, Independent Journal Review found a black guy to yell at Kaepernick (“Army Ranger Vet Tells Colin Kaepernick What He Should Be Doing Instead of Sitting Out Nat’l Anthem”), then Sheriff David Clarke, the black guy Trump had at his convention, weighed in (“Sheriff Clarke EVISCERATES National Anthem Disrespecting ‘IDIOT’ Colin Kaepernick”). For rightbloggers, two rightwing African-Americans is a quorum.

The prize of chutzpah probably goes to Freedom Daily, who just compared another black person favorably to Kaepernick and considered that a rebuttal:

The most upsetting part is the fact that Usain Bolt stood at attention for the national anthem during the Rio Olympics yet an actual American cannot be bothered to do so. Bolt is Jamaican. [White] U.S. Pole vaulter Sam Kendricks stopped in mid stride in order to stand at attention too for the national anthem during the Olympics.

This vital intelligence they ran under the headline “Two Olympians DESTROY Black Lives Thug QB Colin Kaepernick, And One Is NOT even American!” The Black Lives Thug Kaepernick, in other words, is like one of those black people Andrew Klavan told us deserved to get shot.

Alt-right, old-right — in the end, the difference is mainly a matter of style.