The point was that Mayor Bill de Blasio is a small-minded, business-unfriendly lout whose posturing about affordable housing and income inequality betrays a startling naïveté about what drives the New York economy. Tusk, who has emerged as one of the more prominent political consultants in America — he was Michael Bloomberg’s campaign manager for the mayor’s third re-election bid, in 2009 — is speaking for a whole cohort of New Yorkers who are sick of the de Blasio era. A former Democrat, Tusk no longer belongs to a political party. He is unabashedly pro-business, a Bloombergian technocrat with a reflexive hatred of the left-wing populism animating today’s politics.

“Just ask the Ronald Reagan question from 1980: Are you better off than you were four years ago? Is it more equal? Is your rent lower? Are your kids’ schools better? The answer to all of that is going to be no,” the 42-year-old told the Voice in June, speaking from his pristine, and mostly bare, conference room in the Flatiron office of his firm, Tusk Strategies. Tusk, who looks like a handsomer Eddie Munster all grown up, is also the founder of Tusk Ventures, an arm separate from the more run-of-the-mill consulting shop. At Ventures, he helps tech titans like Uber and FanDuel navigate (and eviscerate, when possible) government regulators — and that operation has made him a very wealthy man. His Uber stock alone will pay off remarkably if the company’s $60 billion–plus valuation holds.

But it’s Tusk’s latest venture, NYC Deserves Better, that is turning the most heads in the city’s insular political world — and may soon be known to a lot more New Yorkers if all goes according to plan. Through a website, polling, and eventually attack ads, Tusk hopes to pave the way for a Democrat to defeat de Blasio when he seeks re-election next year. He’s out for blood, and he may be the first political consultant in New York City history to target a sitting mayor on his own — spending his personal money to do the dirty work on behalf of no candidate whatsoever. It’s the national model made local; instead of a billionaire with a super-PAC, it’s a millionaire with time on his hands and an ax to grind, a married Gramercy Park father of two who also happens to have unrelenting Bloomberg nostalgia.

Tusk maintains he is doing this because he believes de Blasio — who is facing multiple overlapping state and federal investigations into his political fundraising, a disastrous Lower East Side land deal, and a possible quid pro quo in his quest to ban horse-drawn carriages from city streets, not to mention the arrest of two donors — is fundamentally corrupt. “There’s such a consistent pattern of pay-to-play in this administration,” Tusk said. His group now offers public comment on every de Blasio misstep and has requested that he sign its “Pledge of Honest Leadership,” which asks him to forgo donations from anyone seeking city permits, contracts, or grants.

But his venture can feel strangely personal, like de Blasio ran over the Tusk family dog a decade ago and never apologized. Other Bloomberg acolytes hate de Blasio, who campaigned on an anti-Bloomberg platform. But they’ve also moved on. Howard Wolfson, a former Bloomberg deputy mayor, told the Voice he was “surprised” when he heard Tusk was putting City Hall in his crosshairs. But he was quick to add, “You’re not going to make much money betting against Bradley Tusk.”

Tusk grew up in Lawrence, a village in Nassau County, and spent time after law school working for Senator Charles Schumer. But his study on power and how to wield it began in Illinois, where, at the age of 29, Tusk became deputy governor under Rod Blagojevich, cementing his status as a political wunderkind. As the Democratic governor’s “superstar,” as the New York Times described him, Tusk basically ran the state for three years, overseeing a vast portfolio including legislation, communications, and the budget. Tusk had been gone for two years when Blagojevich was arrested in 2008, later to be convicted on several charges, most notably for trying to control who would replace Barack Obama in the Senate. Tusk was never accused of any wrongdoing, although the charges against Blagojevich stemmed in part from his first term, when Tusk was his right hand.

Tusk’s next gig, as an in-house lobbyist for Lehman Brothers, sent him around the country to get states to privatize their lotteries. Lehman’s central role in the 2008 financial collapse didn’t tar him either, and by December of that year, Bloomberg had tapped the 35-year-old to head up his re-election bid despite his lack of campaign experience.

The 2009 Bloomberg campaign had no precedent — which was true of his 2001 and 2005 bids, too. Bloomberg had overturned a term limit law to give himself the opportunity to run for a third time and spent $100 million of his own money to make the victory possible, a vast sum that may never be equaled at the state level. “It was basically like running a presidential race in one time zone,” said Stu Loeser, a top Bloomberg press secretary. So it wasn’t much of a surprise that Tusk got Bloomberg re-elected, though in the end Bloomberg barely edged out his listless Democratic opponent, Bill Thompson, winning by less than five points despite a fourteen-to-one spending advantage.

If Tusk’s 2009 tour was successful if uninspiring, his follow-up campaign was a failure: a drive to bring Walmart to New York City. Walmart hired Tusk to oversee a public relations blitz that could not win over (or intimidate) the staunchly Democratic and pro-union political establishment. Television and radio ads, glossy mailers, polling, and a rapid-response team could only do so much against unified opposition to an East New York store Bloomberg craved. A deal with Related Companies eventually fell through, and de Blasio’s election ensured Walmart couldn’t have a Brooklyn beachhead.

Tusk’s next campaign for a billion-dollar corporate client in New York would go much better.

Tusk says he prays every morning and writes in a “gratitude journal.” The latter probably featured Uber at some point, after Tusk charted new ground in the tech world with his equity-for-representation model. In exchange for shares in the $60 billion company, he bludgeoned de Blasio last year over a proposal to cap the number of for-hire vehicles in the city. As de Blasio, a former operative himself, limply punched back via newspaper op-eds and the occasional press conference, Tusk marshaled Uber’s bottomless resources for a coalition-building exercise that successfully pitted a key de Blasio constituency, blacks and Latinos, against him. Never mind that many people who hail Ubers are affluent and white; Tusk’s campaign pointed to the underpaid drivers who are neither, and accused de Blasio of trying to steal their livelihoods. It didn’t help the mayor that taxi medallion owners had generously bankrolled his 2013 campaign: Tusk painted hizzoner as a tool of scumbag taxi kingpins, and it worked. Uber even crafted an anti–de Blasio feature for its app.

Tusk’s campaign managed to paralyze a de Blasio–friendly City Council, which took the rare step of declining to vote on one of the mayor’s pet bills. Uber was allowed to expand, unfettered, in the five boroughs.

“It was my introduction to taking these guys on,” Tusk said of de Blasio’s inner circle. “What surprised me the most was how ineffective they were, to be honest.”

Tusk describes his effort to unseat de Blasio as a civic duty. “I did this because I looked at it and said, there is a distinct possibility that if no one stands up, despite de Blasio being a really bad mayor, despite there being big corruption, he could still get re-elected. And someone needs to make the first move to pave the way for someone else to run.”

Tusk insists he’s not acting at the behest of Bloomberg, who has not offered public comment on de Blasio’s leadership. Others in Bloomberg’s orbit say he’s telling the truth; if Bloomberg himself wanted to make a point, he probably wouldn’t be so circumspect. Personal animus and ideological difference appear to drive Tusk most, though it’s also worth pointing out that his newer clients, like the Patrolmen’s Benevolent Association, perhaps de Blasio’s harshest and most consistent critic, want to see the mayor fail.

Tusk knows any de Blasio replacement would probably be another center-left Democrat. City Comptroller Scott Stringer, Bronx Borough President Ruben Diaz Jr., and Brooklyn congressman Hakeem Jeffries are the three challengers floated most. Tusk does not have a dog in the fight, though he’s said to be fond of Stringer. Working directly for Stringer or any of them is probably not an option. A former Walmart mouthpiece can’t comfortably go back onto a Democratic payroll.

“It will be interesting to see who, if anybody, ends up buying what Bradley is selling,” a City Hall source told the Voice. “I’d feel sorry for whoever he dupes into spending the better part of next year raising money and running a campaign just so Bradley can line his pockets with independent-expenditure cash.”

Tusk’s challenge will ultimately be to make New York seem worse than it actually is. When I met him in his office, he claimed he had just walked by someone urinating on Broadway. But in reality the city is far removed from its 1970s nadir and remains in every way the gilded playground Bloomberg left it.

Still, a few million dollars’ worth of negative television ads could make de Blasio’s political existence more precarious. In 2013, an independent expenditure from a well-heeled animal rights group damaged de Blasio’s top rival, Christine Quinn, without the insurgent Democrat lifting a finger. “There’s no question in my mind that a sustained effort like that, to some degree what happened in 2013 to benefit the mayor, could very well be the thing that defeats him in 2017,” said Mike Morey, a press secretary for Quinn’s 2013 campaign.

For now, de Blasio’s enemies are in wait-and-see mode. The election is over a year away. Unless Tusk can convince liberal whites and African Americans to desert him, de Blasio will survive — however shakily.

“Bradley has represented some people who are on the opposite side of the fence from de Blasio, and so by doing this, even if he doesn’t get anywhere, he builds credibility with his clients,” said John Mollenkopf, who directs the Center for Urban Research at the City University of New York Graduate Center. “A mayor always faces people trying to knock him off his perch. It’s very hard to do.”

[Editor’s Note: The initial version of this story stated that Tusk is the “father of two boys.” In fact, he has a son and a daughter. We regret the error.] 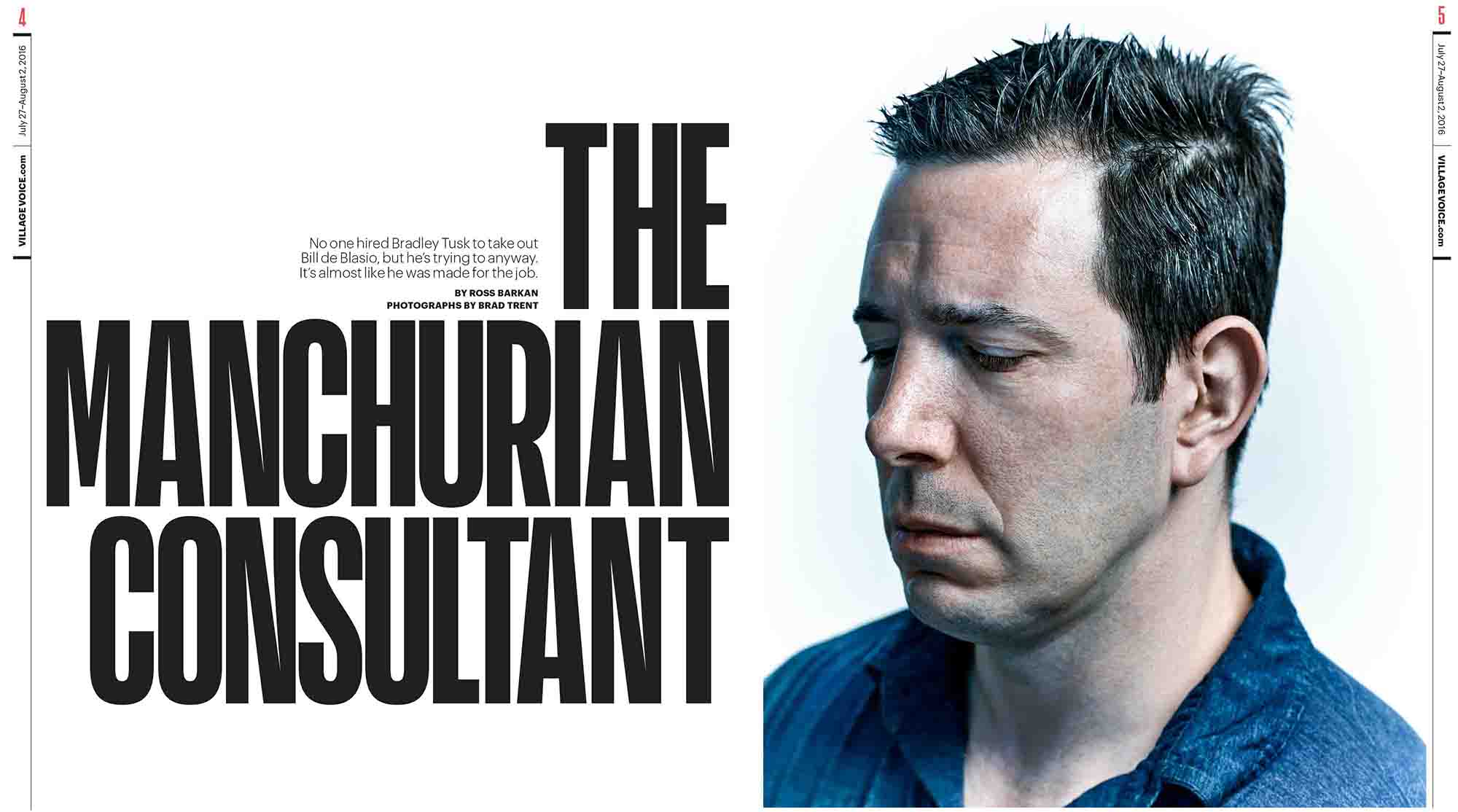 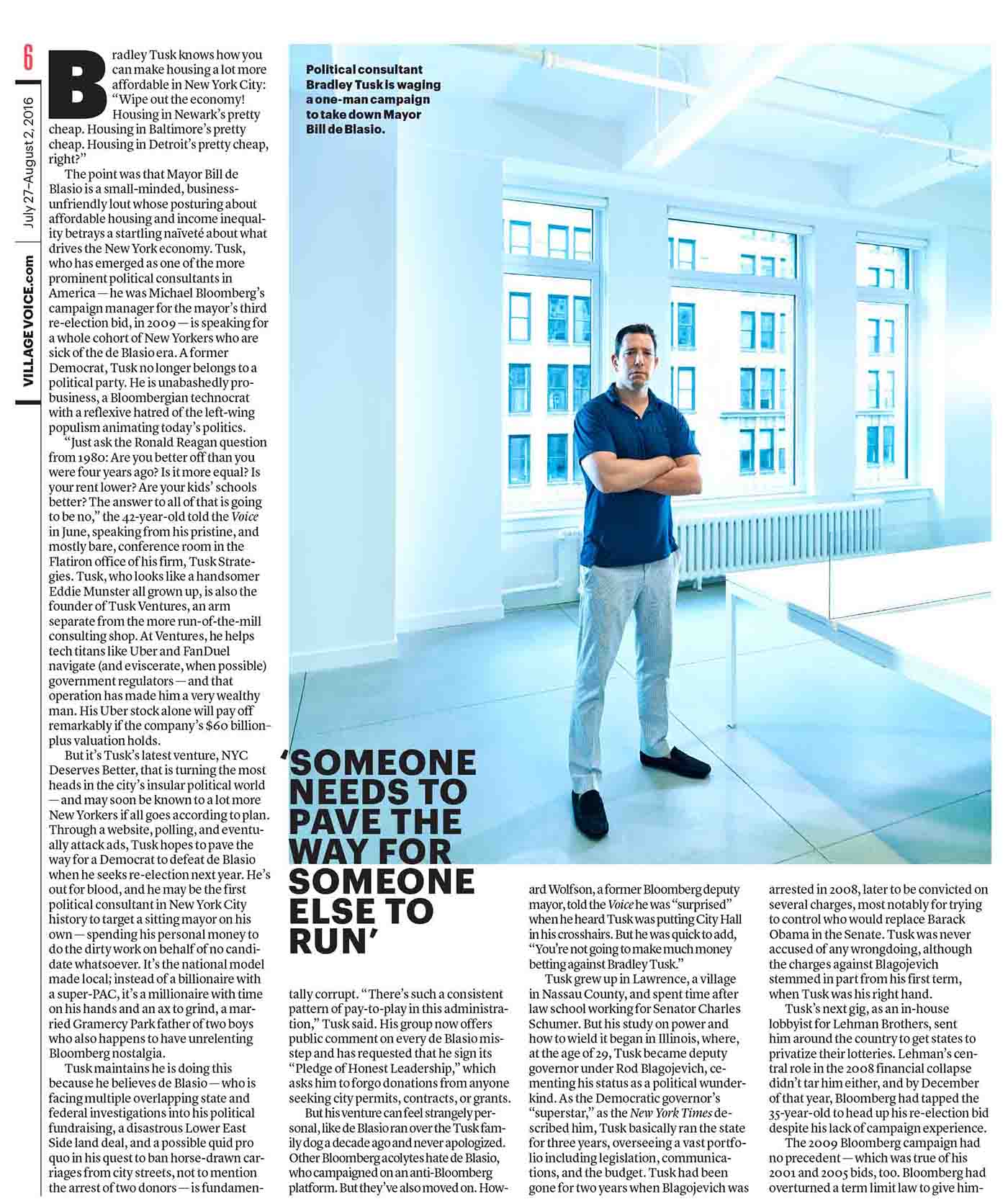 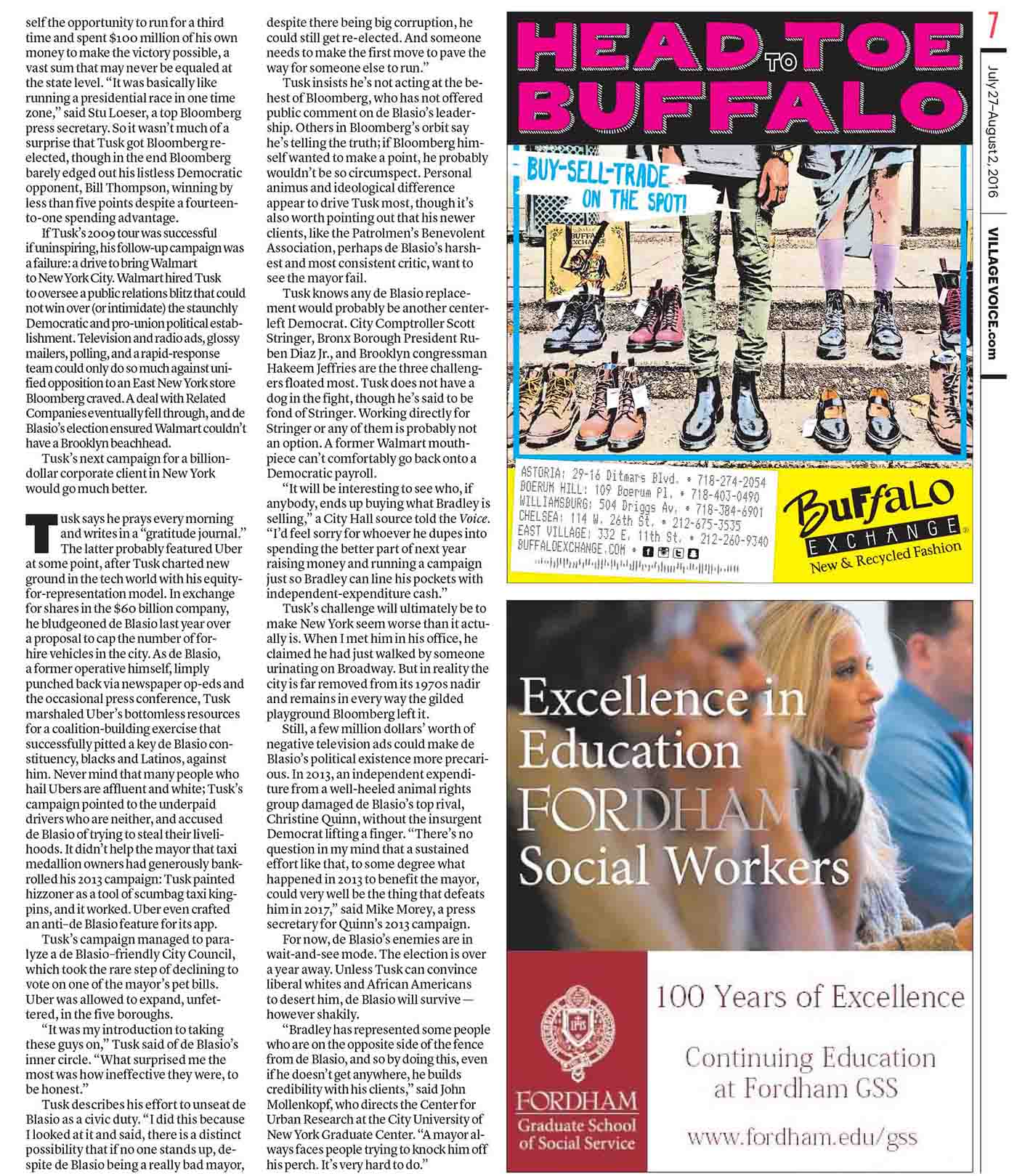