When Sarah Gross moved to New York City in 2008, she made it a goal to try every vegan chocolate she could get her hands on, thinking it wouldn’t take that long. “Three hundred bars later, I was really into chocolate and knew what I liked, what I didn’t like, and what flavors were lacking out there for vegans,” she tells the Voice. But having been a professional ballet dancer, starting her own chocolate company to fill out those vegan flavor needs wasn’t an obvious career grand jeté.

Then, in 2009, she adopted Mocha — a rescue pit bull who immediately stole her heart — and had a revelation: Could she could fuse her love of good chocolate with her desire to help more pups in need?

And on the concrete streets of New York City, Rescue Chocolate was born.

Her business plan was largely inspired by Nathan Winograd’s book Redemption and his subsequent founding of the No Kill Advocacy Center, which lays out programs that help shelters turn 90 percent kill rates into 90 percent adoption rates. Gross figured that her products could help inspire change in two ways: First, the proceeds would benefit rescue charities all over the country; second, each chocolate could bring to light a specific plight of animals in need. 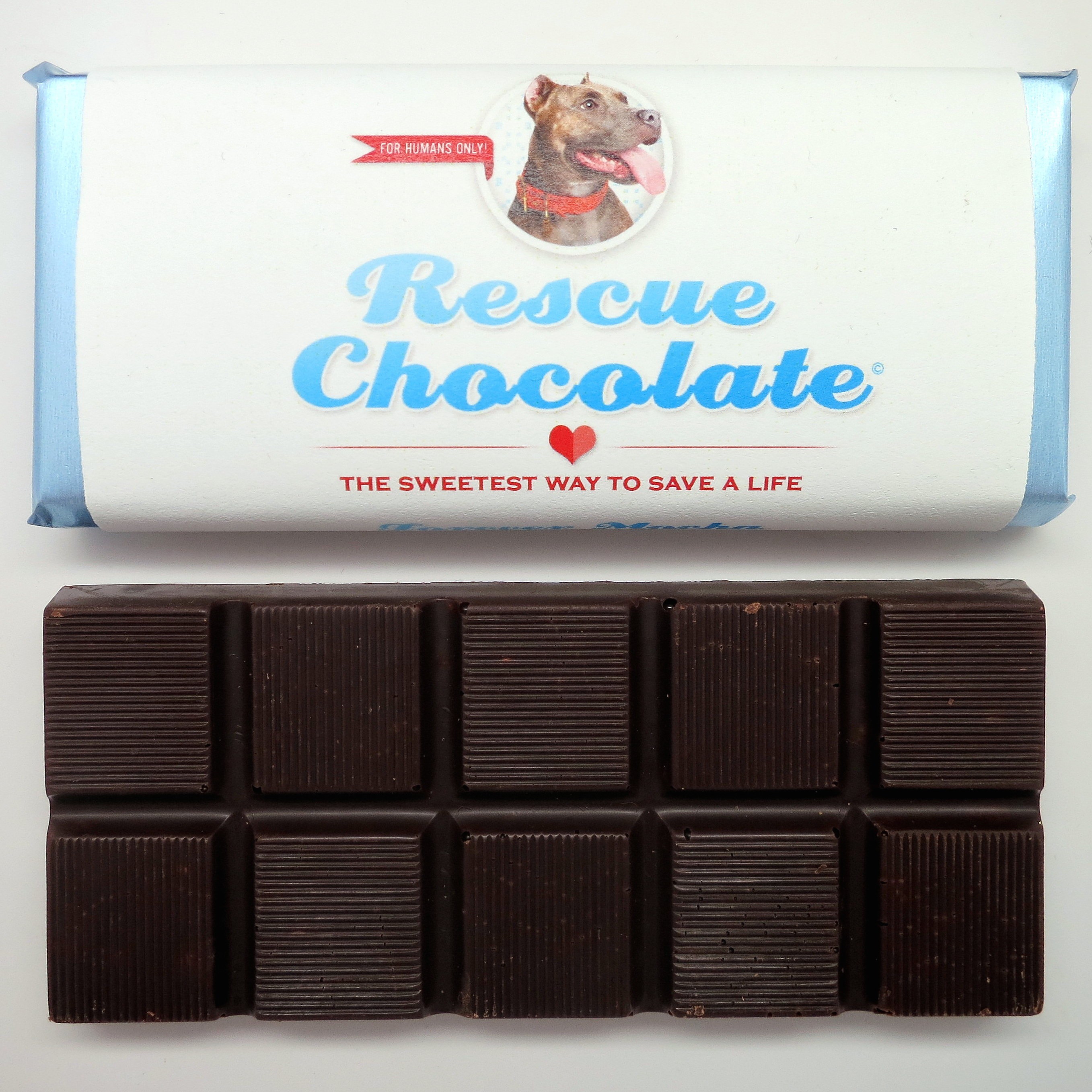 Rather than come up with her own chocolate concoctions and produce out of a commercial kitchen, Gross met with Jean-François Bonnet at Brooklyn Born Chocolate Factory in Brooklyn. “We’ve been working together ever since,” she says. “Jean-François was already so good at what he does. I knew the kinds of combinations I wanted, and then we just tweaked small things — like the balance of sweetness or crunch.”

“The Pick Me! Pepper was my passion project,” Gross explains, “because I love spicy chocolate.” Pasilla and mulato peppers are folded in with other spices and fleur de sel in the Pick Me! Pepper. The bar aims to show the importance of picking purebreds and mixed-breed animals from shelters rather than buying pets from breeders or pet stores (which can be supplied by puppy mills).

Four other bar flavors followed those first chocolates, and then came bonbons.

“Initially, we didn’t use organic chocolate,” Gross says. “The reason was that most chocolate we were buying was inherently organic anyway, as our suppliers in South America, Africa, and Indonesia don’t use pesticides, but not all [of those suppliers] got organic certification. A few years ago, we switched over to all-organic since many people now won’t even try a chocolate if it’s not certified. Plus, we’ve always been fair trade and vegan. So now we’re all three.”

Other than Bonnet and his team of co-producers and packers, Rescue Chocolate is pretty much a one-woman show. In their first year of production, most of their press came from animal rights activists and the rescue community — people who were excited about the idea as a whole. Robust first-year sales have grown by 250 percent since 2010, and now, in addition to being available for purchase online, her products can be found in stores from coast to coast.

Where the proceeds go is an ongoing experiment. Any shelter can sign up to partner with Rescue Chocolate so that when people order online, they can choose where their donations land. Then a single rescue group receives remaining proceeds for a calendar year. “The group for the year is chosen based on how far our dollars can go with them,” Gross explains. “The No Kill Advocacy Center — our group this year — is a small company compared to ones like the Humane Society. It’s important that what we’re able to give focuses on organizations where the majority of donations go directly to helping shelters.”

Nowadays, Gross’s job requires her to come up with ideas to make sure Rescue Chocolate’s company outreach and products are growing. There are some seasonal chocolates — like the truffles that will be available until shortly after Mother’s Day, when the summer heat makes the delicate treats difficult to ship. Gross is particularly excited about the company’s Like White line (being more off-white in color than white), with a base made of chia seeds and Brazil nuts in cocoa butter, mimicking the flavors you’d normally get from a white chocolate rich with cream.

“It’s super healthy.” she says. “We came up with three different flavors: the Crunch with toasted quinoa, which is almost like a Rice Krispie but even crunchier; the Fancy Fruit with raisins, which works so well with the white chocolate; and the Cookies ‘n Cream, which has an Oreo-like cookie crushed into the bar and is quickly becoming our second best seller.”

As far as her challenges in the chocolate world, Gross says she mourns how little money a small company can actually make with a food product. “The profits are minimal because of how expensive the ingredients are,” she admits. “Our chocolate is made in Brooklyn with organic, whole, fair-trade ingredients. We want them to be affordable. But I wish we could donate more.” She recognizes that if she were producing in the middle of the country — where real estate prices are cheaper and where she could be more in control of her product from start to finish — things would be more affordable, and she could get into more stores.

But for now, she’s at home in New York with Mocha and will continue to focus on getting Rescue Chocolate’s message out there. “Being a professional ballet dancer required no talking,” she admits. “You’re out there to be seen, and then you retreat into your private life. I’ve learned that it’s never okay to be quiet in my business now. I have to put myself out there. I have to continue to go to networking events. The more I can share, the better. Because the more people know, the more they’ll support our company. And the more they support our company, the more animals we can then support, too.”