A drum and tambourine keep time, a banjo player starts plucking, and two fiddlers raise their bows. The stars of the afternoon, though, are the rest of the musicians, who shrug on their shoulder straps and, some more gracefully than others, lift their accordions. “That instrument is so nice, it’s making my eyes water,” one player murmurs to himself as he ogles his neighbor’s souped-up, 23-pound “Cadillac” machine. And then they’re off, alternating between galloping hora rhythms and tinkling melodies.

“Make it pretty now,” says Sy Kushner. The 72-year-old leading today’s ensemble picked up the accordion as a kid in the Bronx, where it starred in his neighborhood synagogue — not exactly the coolest place for inspiration, but inspiration nonetheless. After a lifetime pressing keys, he’s not letting his eager students off easy. “Relax. Take a few deep breaths.” He swoops his hands through the air in big arcs. “I want to squeeze more out of you.”

The players have hauled out their instruments for a klezmer workshop hosted by the Brooklyn Accordion Club, which since 2013 has convened about once a month above Cobble Hill’s Local 61 café. The late risers brunching downstairs can hardly hear the exuberant tunes wheezing above their heads. Right now it’s klezmer, but before too long it might be Jimmy Buffett — the open-mic portion of the afternoon.

Few other instruments stoke the passion BAC members seem to feel for their accordions. Players drive in from Westchester, New Jersey, and much farther — one woman makes the trek from Dobbs Ferry — in search of musical kinship. Mayumi Miyaoka used to commute from Philadelphia to New York City once a week for lessons; when she moved to New York, she founded the BAC to give accordionists a home. By day, she’s a librarian, but she moonlights as a member of Bachtopus — an accordion quartet that plays, yes, Bach.

Squeezebox ensembles (albeit ones less quirky than Bachtopus) used to be a fixture in New York. Throughout the early 1900s, accordion and mandolin orchestras played across the city, from working-class dance halls all the way up to Carnegie Hall. At home, Italian families on the Lower East Side played the instrument. So did Orthodox Jews in Harlem or the Bronx, where the now-defunct local radio station, WEVD, broadcast Yiddish music. Irish immigrants counted on it to keep time for jigs and other folk dances. But as the keyboard and guitar gained popularity, accordion players hung up their straps, and the few who were left watched their instrument become a goofy novelty. 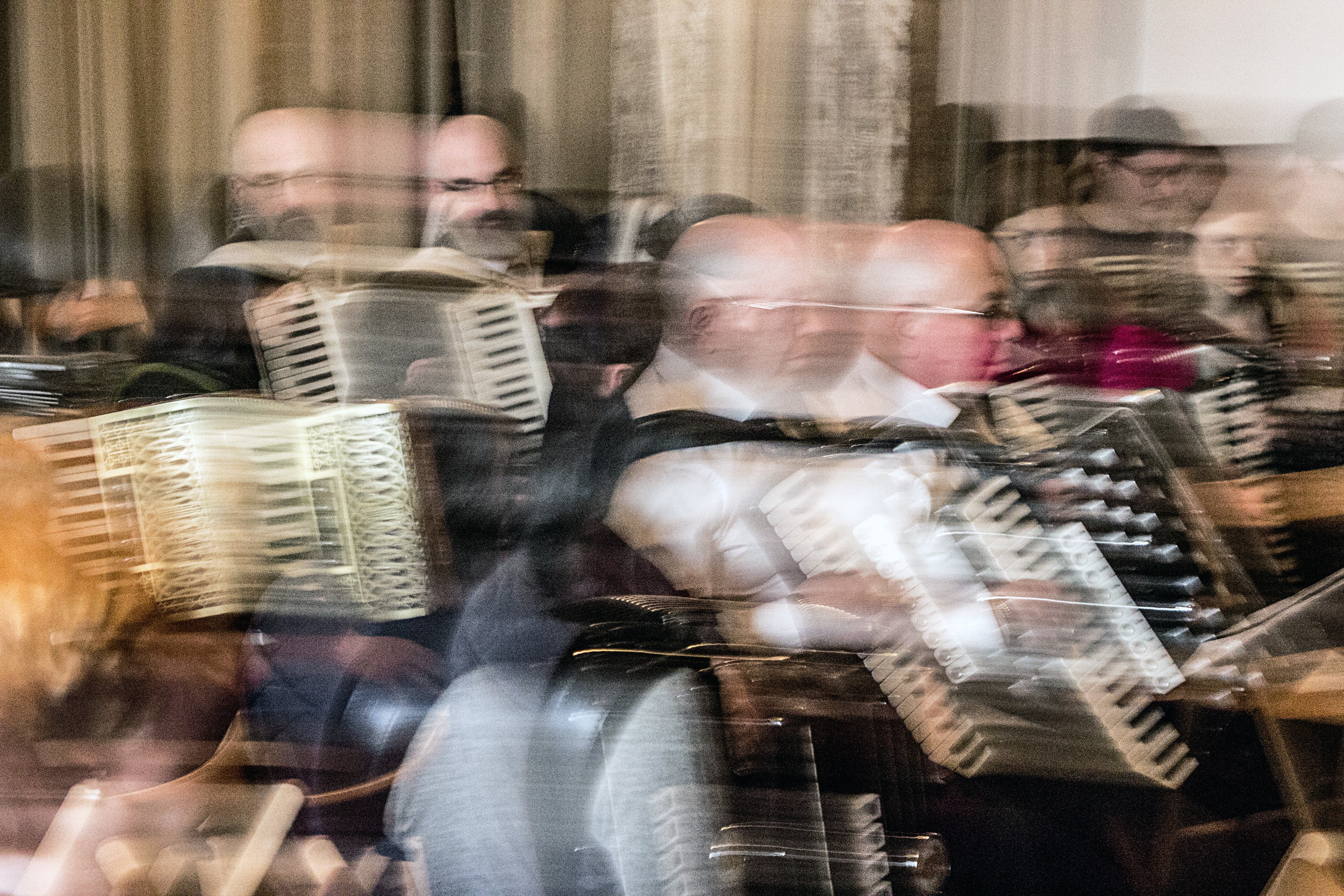 The rest of the world wasn’t on the same page. “The accordion is only corny in the American perception of it,” says 28-year-old Mary Spencer Knapp. A lifelong musician, she picked up the instrument after college, hearing rich, varied sounds — as opposed to schlock — in its unique tone. “Shows like Lawrence Welk kind of ruined it for Americans, but in other countries, [it’s] cool, sexy, and kind of mysterious.”

Knapp leads the “cabaret soul collective” Toot Sweet, which also includes mandolin, guitar, and drums. At the BAC meeting, she performs a solo rendition of her group’s new single, “Dilettante,” which skewers a tech-induced culture of flightiness and razor-thin attention spans. As she sings, “I found it hard to dig deep/Got distracted easily,” she throws cheeky glances over the top of the bellows. She sounds more like indie-hip accordion lovers Beirut than, say, “Weird Al” Yankovic.

Watching Knapp’s very contemporary performance is “Papa Joe” de Clemente, who often sports dark sunglasses and a fedora with a feather tucked into its satin band — “my uniform,” he explains. Clemente is one of the old-timers. The 68-year-old is a proud speed demon who joggles his shoulders up and down to coax notes out at a breakneck pace. He performs standards (Sinatra is a favorite) at weddings, bar mitzvahs, and Italian restaurants. “Any place that calls me, I’ll play,” he laughs. “Have accordion, will travel.”

Evan Perry-Giblin, 26, learned how to fix accordions in Philadelphia and Manhattan and has dedicated most of the floor space in his Fort Greene apartment to a school and repair shop. He teaches kids and retirees and fixes rusted instruments, leaky bellows, and sticky buttons. It’s a much-needed service for enthusiasts, as one BAC member explains: He found his instrument rotting in a garage half a century ago.

One of Perry-Giblin’s repair students is ten-year-old Cate Schwarz, who picked up her grandmother’s cast-off, kid-size accordion on a trip to visit family in Vienna. She’s been playing “for a year and, like, a month,” she says. Her accordion looks like it would dwarf her, but she hoists it with finesse. Schwarz stares at her fingers as she spiders them out carefully along the keys. When her solo is over, she shuffles back to her seat, eyes fixed on her turquoise sneakers. Accordion is a brave choice for an elementary school student, and one Schwarz is proud to have made.

“This is the geekiest thing I’ve ever done,” Perry-Giblin says after the workshop. He’s parading down the street with the rest of the club to take a group portrait. Cars slow down to gawk. Dog-walkers stop to snap pictures, retrievers nipping at their coats. “But it’s a badass instrument.”