Faith Baum and Lori Petchers want to tell you that a long time ago (though not too long ago), they used to be young. They’re constantly reminded of that whole “used to be” part every time they’re out shopping for clothes, makeup, and anything else designed to convince them not to look their age.

In 2011, Baum and Petchers decided to collaborate on the Old Bags Project, an art experiment that explores the experience of middle-aged women. What began with a few personal photographs and interviews with friends snowballed over the past five years into a multimedia exhibition that features nearly seventy women, ages forty to seventy, from across the country. The project has been displayed in several venues around the country in the form of photographs, video, audio installations, and building projections.

On Thursday at the Rabbithole gallery in Brooklyn, the duo will showcase these women wearing only bras and panties, their faces obscured by shopping bags placed over their heads.

Baum, who is 63, and Petchers, 56, say that society’s obsession with youth incorrectly defines and neglects the demographic of middle-aged women, whose age in fact contributes to a stronger sense of self than they ever possessed before. The project pokes fun at our consumerist culture while illuminating the common grievance that middle-aged women feel “invisible.”

“It really speaks back to the mystery of middle age,” says Baum. “In the movies, she meets the guy, they get married, the movie’s over. No one talks about what happens after.” Life after marriage, after childbirth, after the kids grow up, remains underrepresented, she says.

“We have an image of what an older person is,” adds Petchers, “but middle age is a void.”

The artists agree that even biologically, the value placed on a woman’s ability to reproduce compounds the challenge for those who have already had children or gone through menopause. 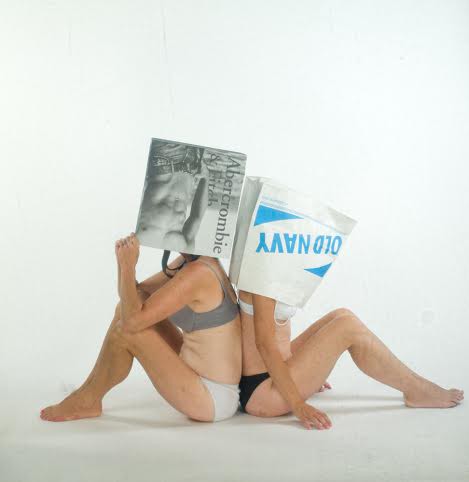 One woman featured in Baum and Petchers’s 2015 book, Old Bags Taking a Stand, writes: “One of the things that happens is that as soon as you’re not fertile anymore, men look at you differently. It’s like you become invisible. It’s strange, but it’s also liberating.”

The provocative program does get audience members thinking — and talking — Petchers said. One man in his twenties, she remembers, made the point that they are “groaning that they’re not being seen” while women twenty years younger are concerned about being objectified. In some cases, middle-aged men in attendance, husbands of some of the project’s participants, didn’t recognize their wives’ bodies with their faces covered.

Others, Baum says, have missed the joke entirely. “Some people don’t get that the ‘old bag’ is a tongue-in-cheek sort of thing,” says Baum. “They’re offended and say, ‘I’m not an old bag!’ Well, that’s what the project is all about, sweetheart.”

The Old Bags free solo exhibit will take place on February 11 from 6:30–9:30 p.m. at the Rabbithole, 33 Washington Street, Brooklyn.