Activists from left-wing Jewish groups scattered across the city on February 2 to distribute some 10,000 copies of a bogus New York Times edition espousing a “new editorial policy” regarding coverage of the Israeli-Palestinian conflict.

This morning, Jews Say No! (JSN) and Jewish Voice for Peace New York (JVP-NY), two organizations “devoted to justice in Palestine and Israel,” took responsibility for the prank, which they call a “parody.” Donna Nevel, a member of JSN and founder of Jews for Racial and Economic Justice, says the paper was partially inspired by the Yes Men, an activist group initially among the leading suspects.

The paper was created to highlight the current biases in Israel-Palestine reporting, says JSN member Alan Levine, “and to show what a paper that was fair and accurate should look like.” 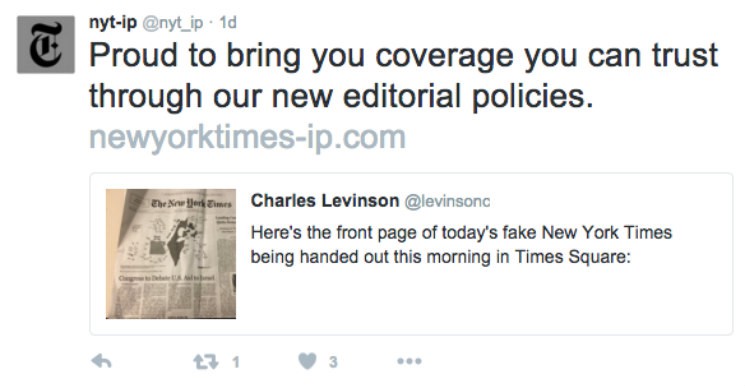 JVP-NY member Candace Graff says the faux paper looks like what these groups wish the Times and other media outlets would report. “It includes the context and facts too often missing,” she says. Occupation, settler violence, and discriminatory laws are subjects that deserve more media attention, adds Graff, who believes the increased coverage would affect U.S. policy on Israel.

“Both our groups are interested in reaching new people and new communities to stand up for justice in Palestine and Israel,” says Nevel. “We want to make our voices heard with integrity.”

The Twitter account associated with the prank, as well as an accompanying website resembling the New York Times‘, have been suspended. The Times said it shut down the fake paper’s online version, which copied the news institution’s design and deliberately misled users. However, both the site and the Twitter account have been archived. 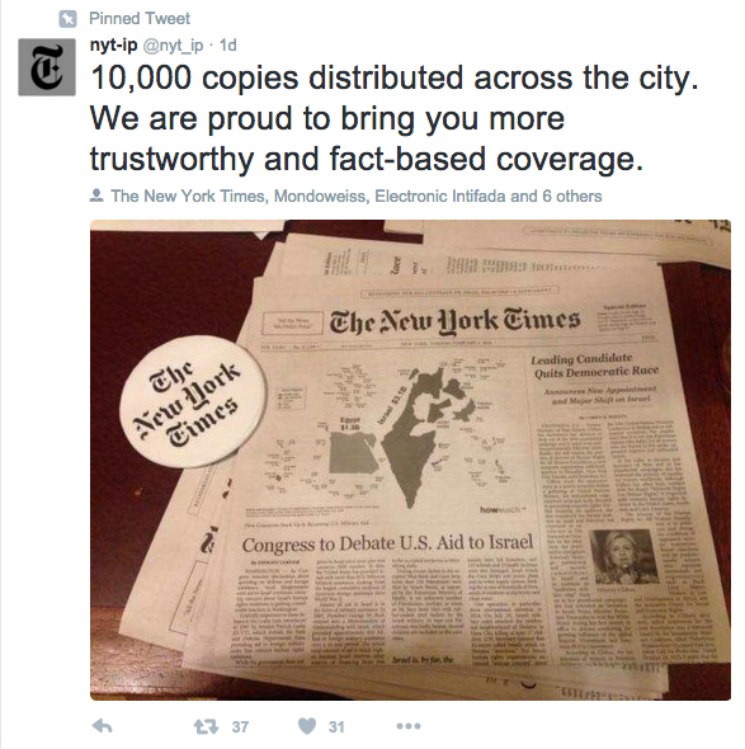 In just 24 hours, the groups have managed to spark some controversy, particularly within the Jewish community. “The political agenda behind this action undermines hopes for a just peace and is harmful to Israelis and Palestinians alike,” says Roz Rothstein, CEO of the Israel advocacy and education group StandWithUs. “Those who support a better future for both peoples should put the propaganda aside and realize that tearing down Israel is not the answer.”

Yesterday’s fake newspaper isn’t the first time JSN and JVP-NY have joined forces. During Hanukkah, the two groups co-organized another campaign around the country, protesting against police brutality, racism, Islamophobia, and refugee xenophobia. The faux Times was already in the works at that juncture.

Well-known left-wing Jewish activists from the New York area helped with the production of the “parody” paper, including Nevel, Rosalind Petchesky (a professor at Hunter College), and Elly Bulkin (an author and member of the Jews Against Islamophobia Coalition). Overall, more than twenty people organized over the past several months to write, fact-check, edit, and design the paper.