George Lucas is the L. Ron Hubbard of Hollywood. Both men were sci-fi dreamers turned mega-millionaires who spun their pulp adventures into a religion. Tap the power within yourself, they urged. The faithful forked over their dollars. Then both Lucas and Hubbard mucked up their simple premise with add-ons like magic floating particles and space lizards.

Jar Jar has been banished, his creator politely strong-armed offstage. Now a new J.J. — J.J. Abrams — commands our attention. His first commandment: Scrap the nonsense. “I thought it was a bunch of mumbo jumbo,” grunts Han Solo (Harrison Ford), who’s never brooked any bullshit. Star Wars: The Force Awakens steers the franchise back to its popcorn origins. It’s not a Bible; it’s a bantamweight blast. And that’s just as it should be: a good movie, nothing more.

With six films already in the series, and four since any of the good ones, Abrams and co-writers Lawrence Kasdan and Michael Arndt had to make Force a crowd-pleasing hit. To ensure it, they’ve copied the arc of the original, A New Hope. Once again, we open in medias res with a scroll of text, a pan down to the stars, and a beauty shot of a giant destroyer. And once again, we have the Dark Side hunting a droid carrying a hidden message, the orphaned desert scavenger who blunders into protecting it, and that same old smuggler and his bipedal dog who inadvertently sign on as escorts, even though Ford can barely be bothered to look nervous in a firefight.

Abrams has also added two fantastic characters, played by two 23-year-old actors who are clearly thrilled to be aboard. This desert orphan isn’t a whiny Tiger Beat poster boy. It’s an athletic, resourceful girl named Rey (new face Daisy Ridley, already a movie star in her very first film) who’s introduced red-faced and sweaty in practical ankle boots. Just as charismatic is John Boyega as a former stormtrooper fobbing himself off as a resistance fighter. Finn, or, as he’s originally called, FN2187 — “That’s the only name they ever gave me” — was stolen as a baby and programmed from birth to obey. We meet him during his very first grown-up battle when his white plastic helmet is smeared by his friend’s blood. Seven films into the saga, this is the only time we’re allowed to empathize with a grunt. The emotion doesn’t last long. Soon, we’re rooting for Finn and his new friends to pew-pew-die his former colleagues, which is much less fun when you know they’re all brainwashed child soldiers.

Our heroes are pursued by yet another black-helmeted villain with inconvenient family ties who’s been “seduced” by evil, a funny verb of choice for such an asexual series (it’s as though good parents in Star Wars fear their virginal kids turning wicked from rose petals and Barry White). This new heavy-breathing creep, Kylo Ren (Adam Driver), vowed allegiance to the Empire, rebranded as the First Order but taking its marketing cues from the Third Reich. (Their nifty red, white, and black logo is a hexagon with fangs.) Can the Rebels — er, now they’re called the Resistance — save the day in what literally plays like just one long day zipped through at light-speed without bathroom breaks? If not, look out, universe! The bad guys have built a spherical weapon that blows up planets. And not just one measly Alderaan. Now they can explode a handful in a go. 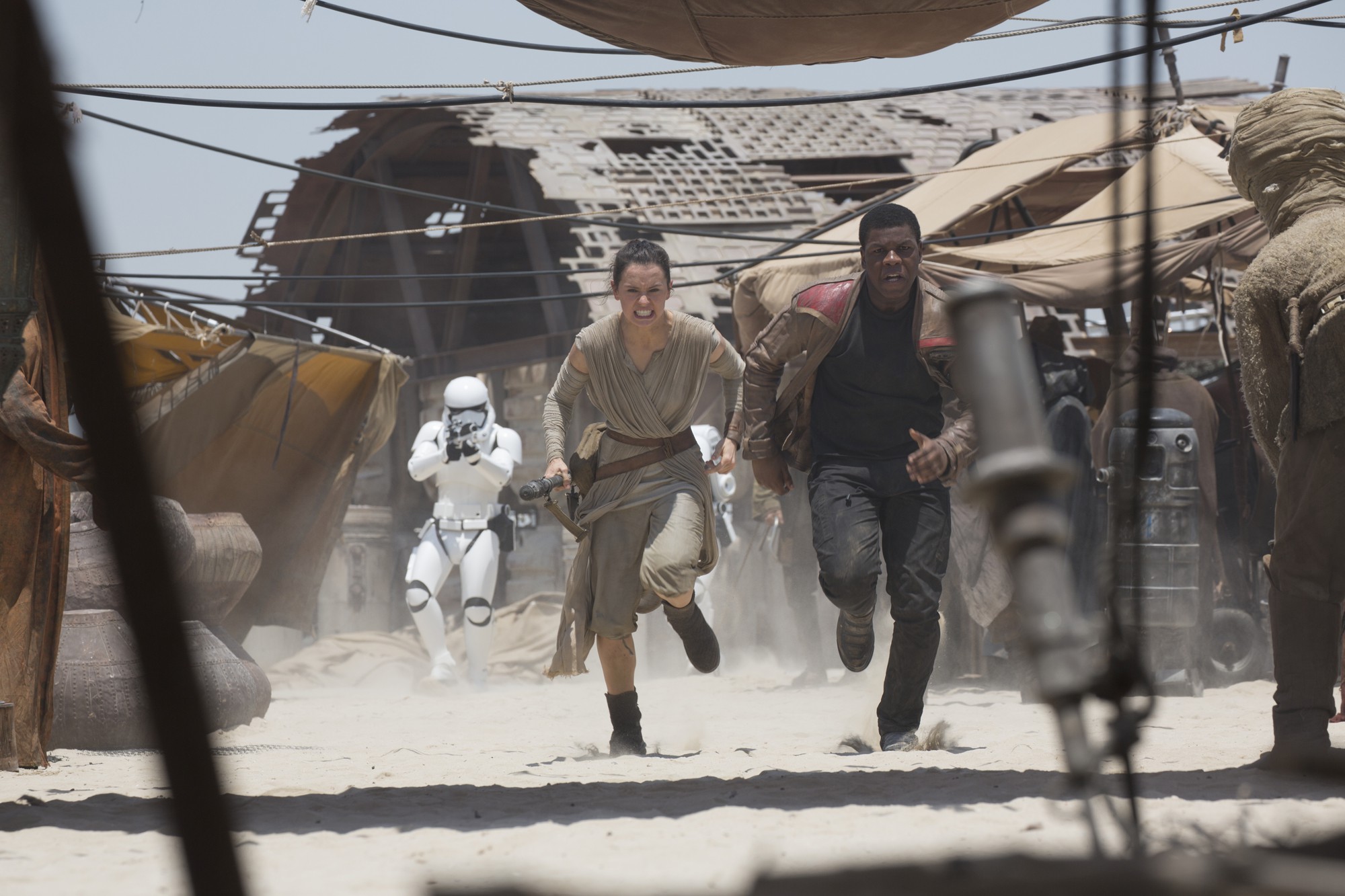 In this déjà vu sequel, everything is the same, only bigger. To prove it, Abrams layers a hologram of his new astral destroyer next to one of the Death Star, where it dwarfs the original like a bowling ball does a grape. (In another curious word choice, this murderball is powered by “the sun,” not “a sun” or “a star” or, as befits a mapped-out galaxy, “Tejat Prior.”) You sense Abrams both slavishly worshipping Star Wars and hoping to show the old girl up, as though the inner powerplays of Lucasfilm are All About Eve with overgrown boys and their toys.

Abrams has made some smart, think-piece-pandering tweaks to the formula. Leia has been upgraded from Princess to General and in the process dumped Han, which couples therapists have seen coming ever since The Empire Strikes Back, when the two spent so much time bickering they didn’t notice they’d flown the Falcon inside a carnivorous slug. Lucas should apologize to nerd bachelors who’ve spent three decades thinking Han and Leia were a template for bliss.

Abrams scrounges up more surprises. He knows these dusted-off props and people will get applause just for popping up, but he wants his camerawork to earn its share. Over and over, he aims us at a target — say, a fancy spaceship toward which Rey and Finn dash — then pivots and kablam! we about-face for our first shot of something like the Millennium Falcon. “That garbage’ll do,” shrugs Rey without reverence, and indeed, the Falcon‘s 37-year-old 8-bit target-aiming graphics look about as useful as a busted Atari.

Yet that rusticity is welcome after the overly shiny prequels. Abrams prefers humble wonders, like a powder that Rey stirs into boiling water that puffs up into green bread, or an alien tavern meal of hollowed apples stuffed with romanesco broccoli, that fractal farmers’-market delight. He favors stark landscapes where nature is the special effect. And with good reason. Whenever it leans too much on CG, The Force Awakens trips over its own feet. There’s killer beasts who look like blenders with tentacles and a Yoda-esque savant who resembles an upside-down pineapple cake. The worst offender is the fully animated Supreme Leader Snoke, who looks like the animators said, “Oh, you cast Andy Serkis for this? Screw it, let’s just draw Gollum, burn his face, and magnify him to the size of the Lincoln Monument.”

Only once does the extravagant CG go from blunder to beauty. Toward the end of the film, Abrams indulges in a close-up shot of Rey during a duel. Stare into her eyes and you’ll see he’s added the reflection of lightsaber crosses. This gorgeous hero shot makes you want to follow Rey for the next two films of this holy geek trilogy. Hey, maybe Lucasfilm wants to resurrect a religion after all.